Change Ad Consent Do not sell my data Eight Make Athlon Sports Preseason All-ACC Squad | Syracusefan.com
Menu
Log in
Register
Install the app
You are using an out of date browser. It may not display this or other websites correctly.
You should upgrade or use an alternative browser. 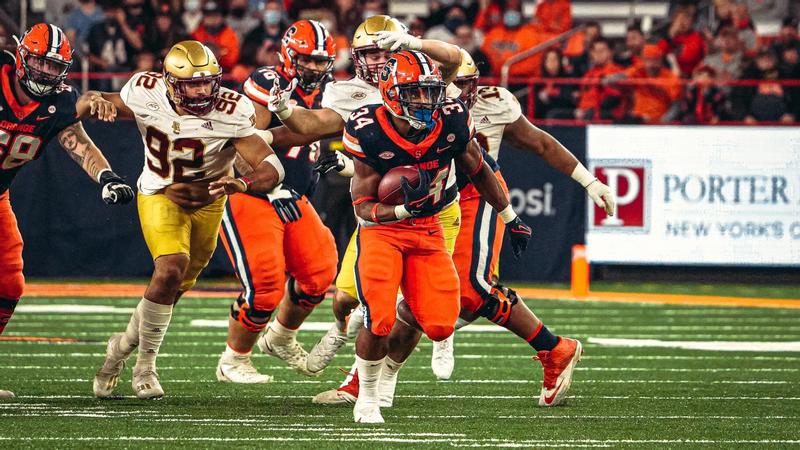 Tucker, has the second-most returning rushing yards nationally of any back behind Central Michigan's Lew Nichols, was the top vote getter on last year's All-ACC Team. Jones was one of the top tacklers in the nation last year and returns as a cornerstone of the SU defense.

The eight selections ties for the seventh-most honorees in the conference.

In addition to the two first team selections, OT Matthew Bergeron and CB Duce Chestnut and KR Trebor Pena were named to the second team, LB Stefon Thompson was selected to the third team and CB Garrett Williams and PK Andre Szmyt were selected to the fourth team.

Think Marlowe will work his way in too if he sures up his tackling
Expand...

Agree.. 4th team is disrespectful. A healthy G dub is a problem

Good -- bulletin board material for GW.

And Kiper has him as the 9th best DB for the draft with no other ACC DBs ahead of him.

Connoisseur of head and legroom.

Some fellas get validation and others got motivation. It seems, though, that the program’s profile is on the rise.

rrlbees said:
And Kiper has him as the 9th best DB for the draft with no other ACC DBs ahead of him.
Expand...

Good point. Athlon is way off on this.
B

Without getting into who should be on an ACC team or not...I mean...ACC Fourth Team? Why not just go all out Athlon...have an ACC Tenth Team too...why stop at 4?

I take these college FB previews with several grains of salt. With portal movement they must be in turmoil. When reading some of the previews it is very obvious the writers have never seen the teams they are covering. Simply grabbing available stats and building a narrative around it. However, real fans can sense the writer has no true feel for the team. Its just a recital of stats

The fact checking is often terrible. I have seen punters names as kickers and kickers as punters...I mean, how tough is this to keep straight? Apparantly, somewhat tough. Cause they mess it up. Guys who are on two deep not even listed. Garbage in..garbage out.

With 14 teams in a conference...4 teams of players keeps all the fan bases engaged in buying the magazines.

Phil Steele's preseason magazine is pricey but it is the best. It should be out in about 2 weeks. It'll keep you engaged.

TexanMark said:
With 14 teams in a conference...4 teams of players keeps all the fan bases engaged in buying the magazines.

Phil Steele's preseason magazine is pricey but it is the best. It should be out in about 2 weeks. It'll keep you engaged.
Expand...

Steele comes out a bit later, but is worth the wait. Far better than the others.

To me the disrespect of our roster has been amplified since the 2019 season when there was some real buzz about our chances and we fell on our face. We need to put together a very solid season for our players to get any sense of buzz. The raw numbers of Tucker make him impossible to avoid for preseason accolades but the rest of the players are facing an uphill climb.

Boggs59 said:
Steele comes out a bit later, but is worth the wait. Far better than the others.
Expand...

If he just interviewed Dino last week...he might be 3 weeks away.
B

I ordered mine today. The order notice said mid June will be the delivery period. No definitive date. So it sounds like next 10-14 days or so before it hits the mail...the fact Dino spoke to Steele... and I'm sure most ACC HC's do as well...shows the level of respect they have for his background. He watches video on every team, has his own sabermetrics system and has worked as a scout. He is a professional...not some guy sitting in his basement putting together fluff like the other previews. Steele puts in the work. Coaches read his preview as there is legit data and analysis. It costs double of Athlon, but well worth it. Honestly, charging only double, Steele likely shortchanges himself money.

As I said elsewhere, I have no sense that the previewers of teams in the other publications have even seen the team. You don't know if the writer even watched Syracuse in 2021. They just take stats, team releases and other notes and construct a narrative that sounds semi plausible.
Last edited: Jun 6, 2022

Short sightedness on the part of Athlon. They forgot about Garrett’s freshman year when he was healthy. 4th team is a joke.
You must log in or register to reply here.