Change Ad Consent Do not sell my data ESPN Katz on expansion and bball--lots of 'Cuse Mention | Syracusefan.com
Menu
Log in
Register
Install the app
You are using an out of date browser. It may not display this or other websites correctly.
You should upgrade or use an alternative browser.

ESPN Katz on expansion and bball--lots of 'Cuse Mention

interesting perspective by Andy Katz. He discusses the football expansion from a bball perspective and brings 'Cuse to the forefront often. What is your take and feelings about his blog?


The realignment effect on college hoops

Let's pause for a moment during all of this alignment chatter and remember there is another major sport affected by these decisions: men's basketball.
And there is a $14.8 billion contract that exists with CBS/Turner and the NCAA that helps offset a number of costs within the membership. That matters too and shouldn't be dismissed as something trivial.
If the dominoes start falling and major realignment becomes reality, what will the effect be on college basketball?
Let's play a little game of "what happens if":
If Oklahoma decides to go to the Pac-12 and brings Oklahoma State with it, what does the Big East do? The conference, in a perfect world, would like to be the aggressor and gobble up three more schools to go to 20 (remember, TCU enters the fold next year). The ideal choices would be Missouri, Kansas and Kansas State, likely in 2013. That would give the Big East 12 in football and 20 in basketball.
How would a 20-team basketball league be conducted? Well, Pitt coach Jamie Dixon said you might as well play everyone once and then have one rivalry game. Can you imagine the same league having Kansas, Connecticut, Syracuse, Louisville, Georgetown and Pitt?
Would the Big East then go to two 10-team divisions with an 18-game schedule and then have some massive conference tournament where the two divisions would cross over? Possibly. Do that and you're really not in the same league. So what's the point exactly? 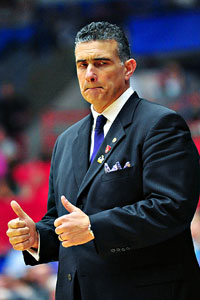 Chris Morrison/US PresswireWill KSU give a thumbs-up to the Big 12? Big East? Pac-12? It's anyone's guess at the moment.

If Oklahoma and Oklahoma State were to join the Pac-12 and Texas didn't want to leave the Big 12, would the Pac-12 get Kansas and Kansas State to go to 16? That would seem more likely. And if that happens, does the Big East look into Iowa State, Baylor and Texas Tech in order to get to 20? That would seem unlikely. And besides, the Big East might not even be at 17 at that point because it is ripe for poaching from the ACC and the SEC.
The best scenario for the Big East is if everything stays quiet with only Texas A&M going to the SEC. But that's unlikely at this stage. If Oklahoma, Oklahoma State, Texas and Texas Tech were to all join a Pac-16, the Big East would have to fight for its own against the ACC and the SEC (the Big East could lose West Virginia to the SEC and two or more schools to the ACC).
The ACC has been extremely quiet. But if it wanted, it could grab Syracuse and Connecticut in a scenario where it offered much more security to bump up to 14. There's also a scenario out there that involves Texas venturing east to the ACC, where it would have a soft landing. The Longhorns could keep the Longhorn Network under the ACC umbrella and UT would fit alongside strong academic schools like Duke, North Carolina, Virginia, Georgia Tech and others. Three noteworthy coaches on campus -- Mack Brown (football), Rick Barnes (men's basketball) and Gail Goestenkors (women's basketball) -- all came to Austin from the ACC.
Adding Texas to ACC hoops would be a tremendous addition, but it would also make it super-sized.
The ACC once was a historic conference with a round-robin schedule pitting traditional rivals against each other twice a year. Now? It's just another league with an unbalanced schedule.
"The ideal conference has 10 teams in the same geographic area where you play everyone twice,'' Syracuse coach Jim Boeheim said. "We're going as far away from that as we can. Why? To make money.''
Boeheim said the best-case scenario might be for the Big East to move to 20 teams and two 10-team divisions since there would be a round-robin schedule within the division. But you're really not in the same league, or at least you don't feel like you're in the same league, with another side that you barely play.
Oh, and before we forget, let's keep in mind the hundreds of other basketball programs that are sitting idle, waiting to see how the power conferences sort themselves out. There are leagues that do things the right way, like the WCC, the Missouri Valley and the Horizon. Leagues that have unbalanced schedules, like the A-10 and Conference USA, are waiting to see how this all transpires, with the latter possibly being some hybrid with the remaining Big 12 since it plays football.
Basketball isn't a player in these discussions on alignment. But it should be, considering it will be affected as much as football and it generates almost all of the revenue that the NCAA produces. The power-six conferences will decide the alignment, however -- not the NCAA office in Indianapolis.
And if the moving pieces on this chessboard get shuffled all about and churn out a few "super conferences," a true conference champion will be essentially a thing of the past. A league won't really feel like a league. It will be much more of a scheduling arrangement/alignment with a conference office administering the championships and issuing the scheduling.
Maybe it's because I'm a traditionalist, but that doesn't sound all that appealing to

I think he's a poor writer and I tend to avoid his pieces; I wish ESPN would recognize that their talking heads sometimes don't have the requisite skills to put out articles. They need much more Jay Bilas on the print end.

I think in the future your division will be your "conference" in the old sense. The other division of your future conference will be like another (old-style) conference that you've agreed to have a certain nubmer of "non-conference" games with- except that they will now be inter-divisonal games. Whether we wind up in an eastern divison of the Big 10, (and I think if they go to 16 they will expand east and there will be an eastern divison, rather than a "legends" division), or a northern divison of the ACC or an eastern or northern divsion of the Big East, I think we will be in a division that mostly represents the northeastern quadrant of the country and thus does the job of the old "Big East" and will have plenty of natural rivals for SU.

I just wish they would go ahead and make all the deals and get it done. I hate living in a kaleidoscope.

I hate all of this realignment crap so much, especially since in reality it's driven simply by conferences' desire to stage a conference championship football game. One freaking game.

It'll take a lot for me to lose interest in college basketball (Syracuse excepted) but this might push me over the edge.

Smithers-Jones said:
I hate all of this realignment crap so much, especially since in reality it's driven simply by conferences' desire to stage a conference championship football game. One freaking game.

It'll take a lot for me to lose interest in college basketball (Syracuse excepted) but this might push me over the edge.
Expand...

They want conference championship games but not a national playoff.

Smithers-Jones said:
I hate all of this realignment crap so much, especially since in reality it's driven simply by conferences' desire to stage a conference championship football game. One freaking game.

It'll take a lot for me to lose interest in college basketball (Syracuse excepted) but this might push me over the edge.
Expand...

I hear you. My loathing of the BCS caused me to completely lose interest in college football a decade ago, and now the continued ation of college football is slowly ruining college basketball.

There are FIVE letters in the name BLAIN.

I agree that this entire conference pillaging and realignment is crap but it is a reality and it WILL happen so the best we can do is try and be proactive and force issues in a way most favorable for the 'cuse. Just hoping it doesnt happen and longing for the days of the original Big East is like hoping the typewriter didn't become obsolete or that betamax would prevail

Wait, so does this mean the AFC and NFC don't feel like they're in the same league or the AL and NL feel they are separate? I don't get how a 20 team league split into two divisions would cause division.
You must log in or register to reply here.

Could ACC-BIG10 Challenge be coming to an end?