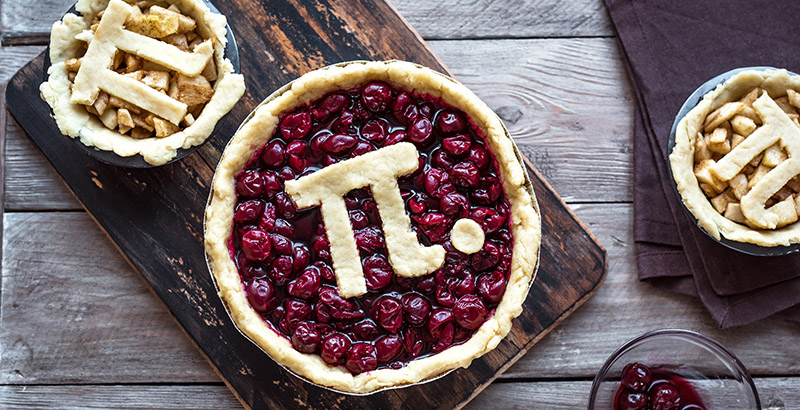 Pi Day celebrates the pi symbol (π) and its importance to mathematics. The symbol is a Greek letter, and it is used in mathematics to represent the ratio of the circumference of a circle to its diameter. The first digits of this ratio are 3.14159, and the number continues infinitely without pattern. It has been calculated to over one trillion digits after the decimal point. Most calculations only need the first few digits. Even the spherical volume of the whole universe can be calculated by using just 39 digits after the decimal point. The symbol "π" was first used in 1706 by William Jones. It gained in popularity after being used by Swiss mathematician Leonhard Euler in 1737. The first large and official celebration of the day took place at the San Francisco Exploratorium in 1988. It was organized by Larry Shaw, a physicist at the Exploratorium. At the inaugural event, people marched around a circular space and ate fruit pies. In 2009, the U.S. House of Representatives passed a resolution supporting Pi Day. 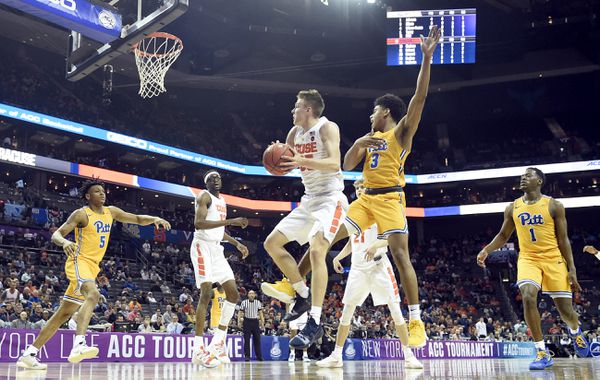 The 3-point shot dropped and Buddy Boeheim reacted, swinging his fist and showing a rare burst of fire.

That shot came Wednesday night in the Spectrum Center with 16 minutes and 23 seconds left in an ACC Tournament game against Pittsburgh. It provided the Orange, which trailed by six at the half, with 43-39 breathing room. And it seemed to awaken both the crowd here and Boeheim’s Orange teammates, who bounced to their bench after Pitt coach Jeff Capel called time out hoping to mute the momentum.

“Oh, man, it was just a great moment hearing all the fans in there and the support we got,” Boeheim said later, after Syracuse had advanced past the Panthers, 73-59. “I just wanted to show a little emotion. Especially in a game like that. It’s a big game for us.
...

Next Up For Duke Basketball: Syracuse In The ACC Tournament (DBR; King)

Duke will play Syracuse in its Thursday night ACC Tournament opener and at this point, there really are no secrets between conference teams.

Thursday’s game will be sans Marques Bolden and Syracuse may be without Tyus Battle, who has not played since taking a hard fall at Clemson. He didn’t play against Pitt on Wednesday night and he’s likely to miss a few more days at a minimum.

Buddy Boeheim filled in for Battle and had a career night with 20.

Duke has said that Zion Williamson is expected back for the ACC Tournament and we hope that he is ready but haven’t heard anything definite yet. The announcement will come some time tomorrow.

Either way, Duke is going to have to pay attention to fouls. Bolden hasn't had a huge statistical impact but he has been a reliable rebounder and shot blocker and the other parts of his game have steadily improved.

Javin DeLaurier is capable but also tends to pick up fouls suddenly in the middle of a game.

That probably puts Williamson, assuming he’s healthy, as DeLaurier’s backup unless Coach K pulls a lineup rabbit out of the hat a la Reggie Love in 2001.
... 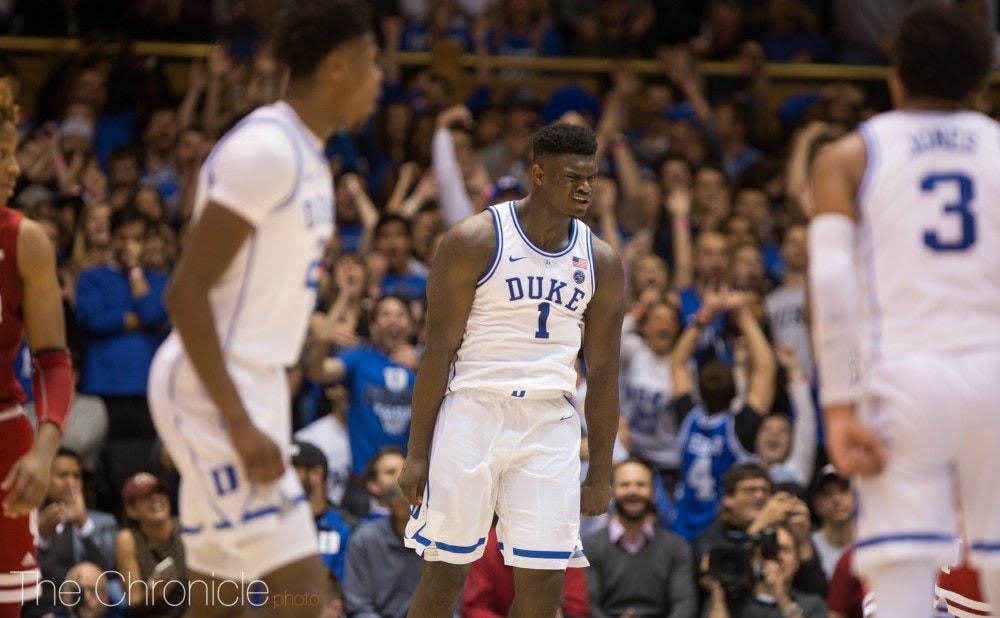 X-Factor: Zion Williamson is a shoe-in to make an immediate impact for Duke men's basketball against Syracuse (dukechronicle.com; Morganstern)

The pressure on Duke’s equipment manager to choose the right pair of shoes must be unimaginable. After he puts the sneakers through their paces and a couple of structural engineers give them the okay, freshman forward Zion Williamson will be rebooted and all tanked up for the Blue Devils’ first game of the ACC tournament. In all likelihood, Zion will take the floor Thursday for the first time since blowing out his shoe Feb. 20.

Before Williamson resumes hospitalizing rims, though, his smarts will be called upon again. The 18-year-old has played the pivotal high post role against 2-3 zones this season and if healthy, he will return there. Syracuse, typically cited as the exemplar of the 2-3 zone, started leaking points to 14th-seeded Pittsburgh Wednesday night. The Panthers’ Jared Wilson-Frame nearly tied a tournament record, nailing eight triples, and the Orange ignored baseline runners early, leading to point-blank layups. The burden of distributing the ball to shooters beyond the arc or lobbing it to Javin DeLaurier behind the zone falls to Williamson. The head on his massive shoulders will certainly be hard at work in Charlotte.

But Williamson’s physique is much more entertaining. Williamson, whose muscles have muscles, is a monster truck. Syracuse forward Marek Dolezaj, his foil, compares better to a chain of motorcycles that are roped together—long and lean, quite fast and very easy to topple. Williamson looks like he ate all of Dolezaj’s muscles as a midnight snack; Dolezaj looks like he hasn’t eaten well in weeks. If we’re lucky, we’ll get a rehash of this fun moment from their first meeting:
...

Duke-Syracuse Game Info (And the rest of the ACC Too) (DBR; King)

Other Quarterfinal Matchups (all on ESPN):

From the Boards: Links to the Raycom broadcast if you don’t want ESPN

Jim Boeheim on whether Tyus Battle can play against Duke: ‘He’s probably 2 or 3 days away’
... 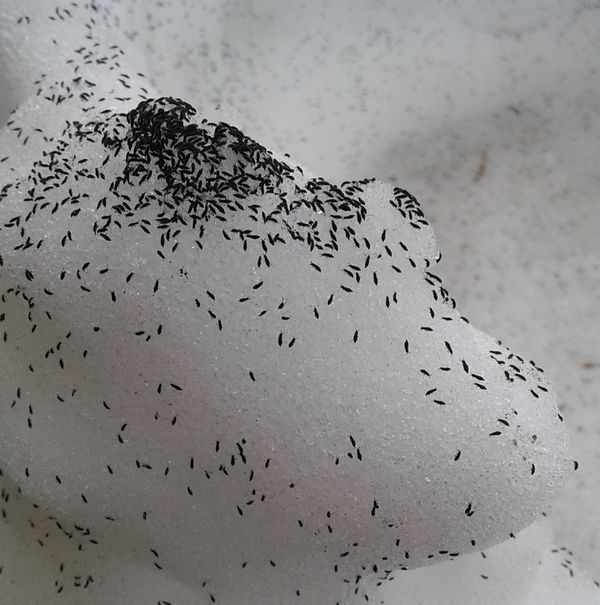 ‘Millions’ of tiny bugs cover snow in Central NY: What the heck are they? (PS; Coin)

The pot of soup that Paul Edem’s wife made Sunday was too hot, so, given this is Central New York in March, he stuck it in the snow for awhile to cool down.

Edem walked outside the next morning and saw tiny black bugs covering much of his quarter-acre patch, centered on that spot where the soup pot had been.

“I thought, what in the world was all this black all over the top of the snow?” said Edem, who lives in the Madison County town of Sullivan. “There were millions of them out there.”

Baffled, Edem shot a photo, and emailed it today to Syracuse.com, asking if anybody knew what they were. We were baffled, too, so we forwarded Edem’s picture to an expert: Melissa Fierke, a forest entomology professor at SUNY College of Environmental Science and Forestry.

Her response was immediate: Snow fleas.

“They’re super cool,” Fierke said. “They’re a natural phenomenon. When you stumble across something like that, you’re like, that’s amazing.”

Snow fleas aren’t fleas, or even insects, for that matter. They belong to a separate group of six-legged creatures called collembolans, or springtails, so-called because they have a spring-like structure that vaults them away from danger.

They can emerge in winter, Fierke explained, because they produce an antifreeze similar to the green stuff that keeps your car from overheating.
...