There are many variations of the sandwich. Instead of or in addition to jelly and peanut butter, ingredients may include jam, honey, sliced fruit, and cream cheese. Nutella, almond butter, and marshmallow fluff can also be used. When marshmallow fluff takes the place of the jelly the sandwich is known as a fluffernutter.

The first peanut butter and jelly sandwich recipe may have been printed in 1901, in The Boston Cooking School Magazine of Culinary Science & Domestic Economics. The recipe called for "three very thin layers of bread and two of filling, one of peanut paste, whatever brand you prefer, and currant or crab-apple jelly for the other." The recipe's creator, Julia David Chandler, said that "the combination is delicious, and, so far as I know, original." After making the sweet 16 on a classic Syracuse March Madness run in 2018, SU took a step back this past season, failing to move past Baylor in the first round of the NCAA Tournament. While the team played better in the regular season this past year, it failed to live up to expectations heading into the season. After adding Elijah Hughes, Jalen Carey, and Buddy Boeheim, many Syracuse fans were looking forward to a deep tournament run. Of course, that fell short. On a team full of scorers, there were too many mouths to feed, without enough three-point threats.

Out of the three newcomers, Boeheim became the knockdown shooter SU turned to down the stretch. After non-conference play, Boeheim shot lights out from three, rarely forcing a shot on his way to shooting 40 percent from deep in conference and tournament play.

Hughes actually ended the season as the Orange’s best three point shooter, as he hit almost 37% of his threes. But the difference between the air-guitar strumming junior and Boeheim, was that Hughes occasionally needed a heat check. After nailing a couple deep threes in a row, he had a tendency to hoist up a contested three early in the shot clock. But besides being a close to elite three-point shooter, he also hit 42 percent of his field goals, just behind Tyus Battle.
...

Wouldn’t we love it if we could get everything we want? Here’s what I’d want from the 2019-20 Syracuse basketball team, broken down by player:

Buddy Boeheim: Boeheim starts the season on a roll and with the exception of one game here and there emerges as one of the ACC’s best shooters. He averages over 12 points a game, establishing himself as the third offensive option.

John Bol Ajak: Ajak shows the most promise of any raw big man Syracuse has had in recent history, and is able to give SU 10 solid minutes a game. His offensive game is surprisingly competent, and he’s able to hit a few 10-foot jumper to keep defenses honest.

Robert Braswell: Braswell packs on 15 pounds of muscle over the summer while continuing to refine his outside shot. He provides 15 minutes a game at wing, and becomes an effective help-side shotblocker.

Oshae Brissett: Brissett gets back to his roots, and remembers that he is a high-energy rebounder that does the majority of his damage inside the paint. He stops settling for long jumpers and 3-pointers, only shooting them when completely uncontested.

Jalen Carey: Carey’s ball handling improves tremendously over the summer and he plays more than 30 minutes a game as SU’s point guard. Carey uses his quick first step to set up his teammates for open looks and becomes a nightmare for opponents at the top of the zone, averaging over two steals per game.
...

The 6-foot-9 center, with a hometown of Pittsburgh, is out of the Woodstock Academy in Woodstock, Conn.
...

It wasn’t the season some observers expected Nassir Little to have at North Carolina, but it was a season that took him one step closer to his dream of playing in the NBA.

And that’s just fine, because Little has never cared what observers have to say, anyway.

“He’s never wavered on who he is as a person and a player, and I think that’s what helped him the most,” said Darryl Hardin, Little’s longtime AAU coach with 1Family Hoops and trainer.

Little announced his decision to enter the NBA Draft on Monday, just days after finishing his freshman season at Carolina averaging 9.8 points and 4.6 rebounds in 18 minutes per game.

Chris Clarke, who was indefinitely suspended from the Virginia Tech men's basketball team last October, has been charged with one misdemeanor count of marijuana possession.

The case was filed Monday in Montgomery County General District Court. The offense date was listed in the online court record as March 20 — the same offense date in the recent case involving Virginia Tech's Ty Outlaw.

The Richmond Times-Dispatch wrote last fall that Clarke and Outlaw were roommates.

Outlaw was delivered a summons on March 26 charging him with one misdemeanor count of marijuana possession. His apartment had been searched by Blacksburg police on March 21, while Outlaw and the Tech men’s basketball team were in California.

Outlaw and the Hokies arrived in California on the afternoon of March 20 for their first two games in the NCAA Tournament.

At 6:07 p.m. that day, according to a subsequent search warrant, a Blacksburg police officer arrived at Outlaw’s apartment in reference to a narcotics violation. While attempting to make contact with the occupants of the apartment, the officer noticed “a strong odor of burnt marijuana coming from the residence,” according to the warrant. The officer was unable to get in contact with any residents of the apartment.
...

WOODY: Among Final Four coaches, there are no strangers (richmond.com; Woody)

Monday morning, Chris Beard, coach of the Texas Tech Red Raiders, called a fellow coach he greatly admires, a man from whom Beard has adopted some of his coaching principles.

That Beard would call Tom Izzo, coach of the Michigan State Spartans, doesn’t seem all that unusual, except . . . Beard’s Red Raiders play the Spartans in a semifinal game of the NCAA tournament’s Final Four on Saturday.

“Coach Izzo is one of my idols,” Beard said. “He’s somebody I look up to, and he’s been great to coaches. When I was a junior college, a small college coach, a young assistant, I watched his teams at open practices at the Final Four for years. In our program, we have terminology, Michigan State Toughness, Tom Izzo rebounder.

“It’s almost surreal that we’ll be having a chance to coach and play against him.”
... 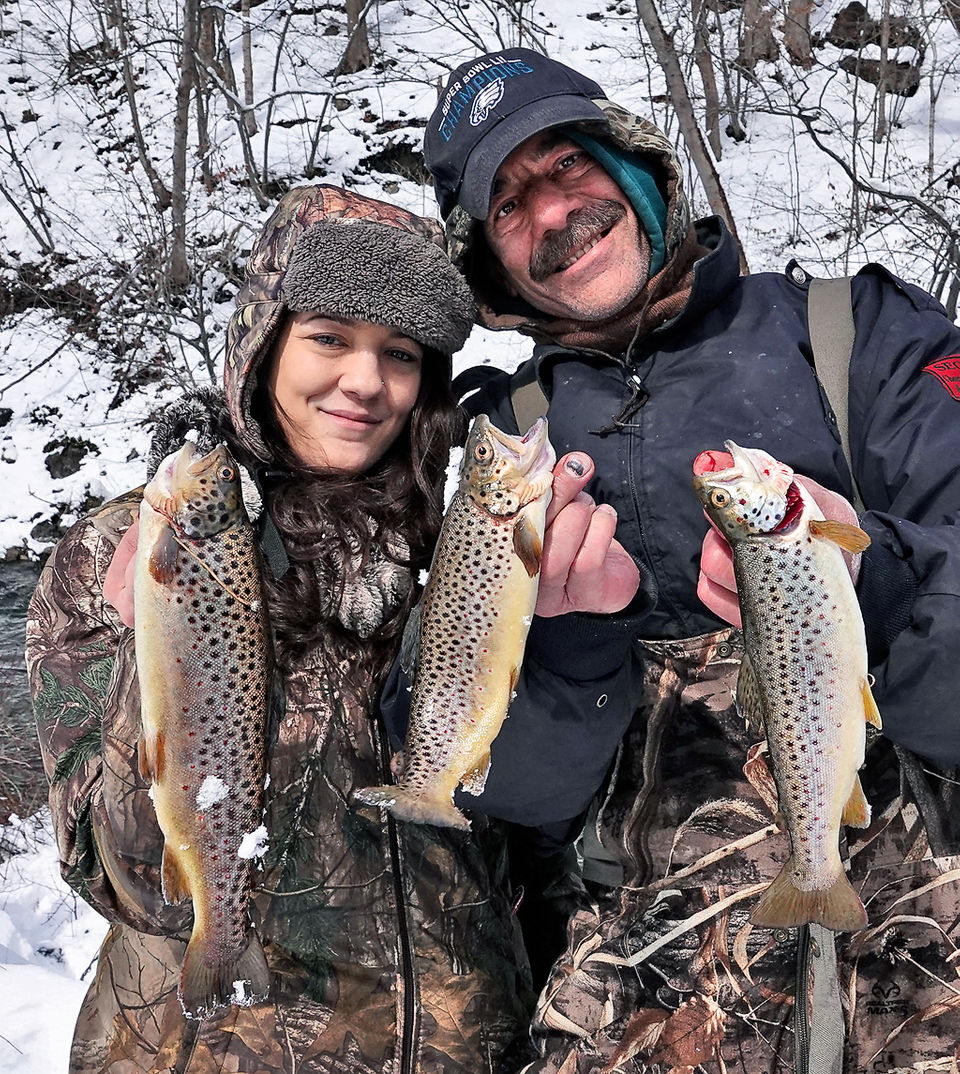 Sondra Ritzel and her father Harry show off their catch by noon. This is their 20th opening day together. Opening day of trout fishing at Nine Mile Creek, near Marcellus Falls, April 1, 2019