Lumberjack Day celebrates the archetypal woodsman, the lumberjack. The day was created in 2005 by Marianne Ways and Colleen AF Venable as an excuse to eat pancakes and waffles with friends, and because International Talk Like a Pirate Day comes a week before it, and they wanted to celebrate a different character. Marianne thought it would be better to have a day to talk like a lumberjack as well. It has grown to be celebrated all around the country, with people getting dressed up in plaid shirts and wearing beards, and even having lumberjack parties. In 2013, the day also started being called National Pancake Day, which increased its popularity.

The term lumberjack was first mentioned in 1831 in Canada. Lumberjacks worked hard, long, and dangerous hours, and traveled to where they were needed, living in lumber camps. In their original form, they existed about a century, up until the time around World War II. They were known for using cross-cut saws and axes to clear lumber, in contrast to modern day loggers who use tools such as chainsaws, harvesters, and feller bunchers. Some characteristics that many lumberjacks had, hoped to have, or were seen as having, were pride in their work, resistance to technological transformation, competitiveness, strength, knowledge of the woods, and aggressiveness.

Syracuse Basketball is back to work after a trip to Italy, focused on the task at hand of preparing for the new season.
Media was allowed to watch practice and record video for the first 20 minutes as to avoid getting schematic elements on camera.

In the time I watched, here are three primary observations from the first practice:

Marek Dolezaj missed Syracuse's trip to Italy in August with a finger injury. While it was a brief sample size at the first practice, one thing is abundantly clear: He's healthy.
Dolezaj will provide an incredible amount of leadership and experience to this team, a key contributor in each of the last two years. At 6'10" he's been a huge help underneath the basket and his improvement from last year along with being healthy is a big bonus for this year's team.

One of the big takeaways from the Italy exhibition games was just how ready Quincy Guerrier is for the college game. From a physical standpoint he's awfully imposing, a rock solid frame at 6'7" 210 pounds. He had multiple double-doubles reminding Orange fans of the last great star to come out of Canada in Oshae Brissett. One look at the picture shows he is ready to handle the rigors of ACC play and proved he can play both inside and outside. It will be exciting to see just how well his advanced game for a freshman translates to the floor in November.

So often with freshmen, Syracuse fans have to go off the latest photos and information to form any kind of a guess on how a player will look in college. For John Bol Ajak, the first impression is quite impressive. John did not make the trip to Italy with VISA issues so the last impression Syracuse fans really had were photos from his junior season in high school before a tough injury kept him out of his last season (and thus dropped his recruiting rating) You can easily see just how much bigger he's gotten. How it translates to minutes in his freshman season are anyone's guess but he can provide a capable
...

The Syracuse basketball squad could potentially land a pair of prized 2020 prospects, although nothing’s for certain in the fickle recruiting business.

Despite projecting to already have a full allotment of 13 scholarship players in the 2020-21 campaign, the Syracuse basketball coaching staff appears to remain in active pursuit of two stellar 2020 prospects. Those guys are four-star wing Andre Jackson and five-star power forward Isaiah Jackson.

The 6-foot-9 Isaiah Jackson, from Waterford Mott High School in Waterford, Mich., is expected to have an official campus visit with the Orange on Sept. 27-29.


Meanwhile, the 6-foot-6 Andre Jackson, out of The Albany Academy in Albany, N.Y., apparently got a visit from ‘Cuse coaches this past Monday, according to a tweet from Mike Waters of Syracuse.com, who cited a source.
Adam Zagoria of Zagsblog is reporting that Jackson has whittled down his list to four schools, and they are Connecticut, Iowa, the Orange and UCLA. Per Zagoria, Jackson seems to have removed Maryland from contention.

In the Zagoria article, Jackson had this to say about the ‘Cuse. “They want to increase their pace of play to get me downhill off ball screens, try to get me to play at the bottom of the zone. My length would be good in the zone and all that kind of stuff, and I definitely agree with a lot of stuff that they say. And they’re pretty good.”

On the 247Sports Web site, recruiting analysts view Syracuse as the favorite to secure the services of Jackson, who is generally regarded as a top-75 guy nationally in the 2020 class. Of course, such prognostications mean virtually nothing at all.

What I did find interesting, though, is Zagoria wrote that “Jackson has been in touch with several uncommitted big men about joining forces, including Isaiah Jackson …”

A top-25 prospect across the country in the class of 2020, Jackson is considering the Orange, along with SEC groups Alabama and Kentucky, Zagoria says. I’m always terrified when the Wildcats are in the mix, however, the possibility of both Jacksons suiting up for the ‘Cuse is intriguing, without question.
...

Fans from across the Capital Region will trade their sneakers and jerseys for dresses and suits at the American Cancer Society’s 14th Annual Coaches vs. Cancer Basket “Ball” presented by SEFCU and Prime Companies, hosted by University at Albany Head Basketball Coach Will and wife Jamie Brown and Siena College Head Coach Carmen and wife Laura Maciariello. Jeff Jones, head coach of Old Dominion University Basketball will be in attendance to accept the Champion of Hope Award, along with two other honorees with local ties and the event will be hosted by ESPN commentator Freddie Coleman.

“This year we are proud to have two young Capital Region bred basketball stars return to the area to be recognized at this special event.” Said Lizzie Hunter, Senior Manager of the American Cancer Society. “Pediatric cancer survivor, Patrick McCaffery, son of one of Siena’s most beloved men’s basketball coaches, Fran McCaffery, will be accepting the Mary Ann Raymond Donnelly Fighting Spirit Award. Glens Falls hometown hero, Joseph Girard III will be returning from his freshman year on the Syracuse basketball team to accept the Inspiration award in honor of his grandfather, whose courageous battle against this disease greatly impacted his basketball career. These three individuals along with Coach Brown, Coach Maciariello and all of our community partners, create an unbeatable team in support of the extraordinary mission of the American Cancer Society.”

This year marks a special milestone in the American Cancer Society’s incredible partnership with SEFCU. “We will be recognizing SEFCU for their 10th year of presenting sponsorship of this event with a special tribute.” Says Hunter. “Their support in Coaches vs Cancer has helped us elevate this event to what it is today, raising over $2 million since inception, but it is really just a piece of what SEFCU, Michael Castellana and all of their employees do every day to further our mission. We are so proud to have them leading us in the fight against cancer.”

Coaches vs. Cancer is a nationwide collaboration between the American Cancer Society and the National Association of Basketball Coaches. This initiative leverages the personal experiences, community leadership, and professional excellence of coaches nationwide to increase cancer awareness and promote healthy living through year-round awareness efforts, fundraising activities, and advocacy programs. Since 1993, coaches have raised more than $100 million for the American Cancer Society.

Every dollar raised at the Basket “Ball” helps the American Cancer Society save lives by helping people stay well through prevention and early detection; helping people get well through hands-on support; by finding cures through groundbreaking research; and by fighting back through public policy efforts. Because of the progress made against cancer, 500 lives are saved every day that would have otherwise been lost to cancer.

This season 3-point field goal attempts are apt to get more than the usual amount of strategic and verbal attention.

The NCAA Division I men’s line has been moved back from 20’9”, adopted for the 2009 season, to a distance of 22’1.75” from a spot measured directly below the center of the basket. The line now matches the international arc and gets us that much closer to one world government. (Just kidding.)

The idea is to achieve long-sought standardization of basketball rules, although NBA threes remain about a foot-and-a-half longer.

Based on past experience the longer 3-pointers will reduce accuracy in college games, or at least impose more discretion among marginally accurate gunners. Experimenting with the longer distance in the 2018 and 2019 NIT, teams saw their bonusphere completion percentages decline.

If all goes as tinkerers hope, the longer threes will spread defenses and open driving lanes. Then kickouts to waiting shooters will be more available.

This is a core approach in the NBA, where the Golden State Warriors, paced by Stephen Curry and Klay Thompson, individually and collectively broke all sorts of 3-point shooting records en route to three pro titles in four years (2015, 2017, 2018) and five straight appearances in the playoff finals.

Frequent embrace of the three is now prevalent among top NBA teams, and coaches can either cringe or cheer, or both, at the ubiquity of the shot.

“What are you doing?” Warriors coach Steve Kerr, himself a dedicated bombardier in his playing days (1989-2003), recalled thinking after watching his stars launch seemingly silly shots from long-range with some regularity. “But that’s the beauty of Steph and Klay. They kind of walk that fine line between lethal and crazy, and we have to live with some crazy shots and some crazy misses because they make more than their fair share.”

A similar mentality may soon apply in the college ranks, although NCAA coaches routinely expect to exert more control than do their pro counterparts. Not that ACC efforts to achieve efficiency were of much avail in 2019 when it came to directing use of 3-pointers.

Eight of 15 ACC schools made below a breakeven percentage (.333) on threes last season, the only time since the expansion of the mid-2000s a majority of league teams shot that poorly from long distance. Two more ’19 squads (Miami and Syracuse) converted at a .333 clip.

In conference competition, just six of 15 teams made a third of their tries.
Certainly the longer shot will make it more problematic to make comparisons to past performance.
... 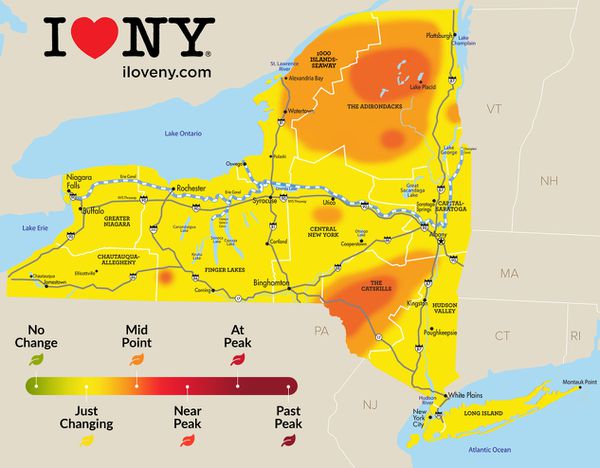 Autumn is in full force. Brilliant shades of yellows, reds, and oranges are everywhere. Meanwhile, some leaves are turning saffron, scarlet, and even purple.

New York state’s beautiful fall foliage season continues to progress. According to the state’s tourism website I Love NY, you’ll see leaves in the Adirondacks near-peak this weekend while the Catskills and other regions reach midpoint.

Here’s a look at this weekend’s expected color change, as provided to the tourism agency by spotters around the state.