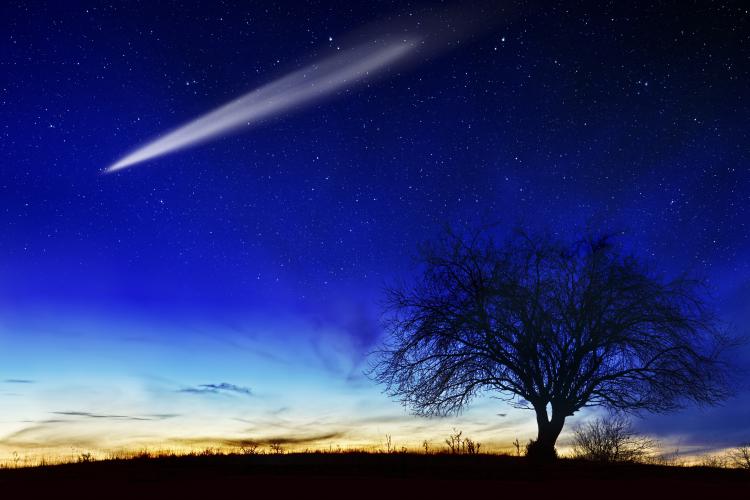 National Meteor Watch Day is observed every year on June 30th. Also known as National Meteor Day, on a cloudless night, people turn their eyes to the heavens in hopes of spotting the glow of a falling star.

Daily there are millions of meteors that occur in the Earth’s atmosphere.

When space debris, such as pieces of rock, enter the Earth’s atmosphere the friction causes the surrounding air to become scorching hot. This “shooting star” streaking through the sky surrounded by flaming hot air is a meteor.

The majority of the meteoroids that cause meteors are only the size of a pebble.

Meteors sometimes occur in showers. It’s an excellent time to plan for a meteor-watching party. Whether we catch a few stray falling stars or witness an entire meteor shower, this day calls for an evening with friends and family under the stars. Identify the constellations while waiting to make a wish or two. Sounds like a romantic night, as well.

"I like to say my parents raised a point guard."

Think about that position on a basketball team--a spot with poise and leadership. Finding a way to will the team to win.

That's exactly how Beth Mowins approaches life. A career that is the absolute paragon for all broadcasters, woman or man.

It just so happens, she's inspiring so many women in her field and has been for decades.

Mowins, a Cicero-North Syracuse graduate, made history in 2017 as the first woman to be on the call for a nationally televised NFL game. That game, was a Monday Night Football matchup.

"It feels pretty cool, when you're going through it Niko, you're so locked in and focused on the task at hand and calling a good game, taking care of your business. It's only after a Monday Night Football or the NFL on CBS that you really take a step back" Mowins said.

Her legacy, however, isn't just about that watershed moment as powerful as it absolutely was.
... When it was time to make a college decision, Pearl Washington, the top rated high school recruit chose the Orange. Washington said that he wanted to play in the Carrier Dome, which had just opened in 1980. That decision boosted Syracuse into the upper echelon of college basketball. With a massive Dome to host the largest crowds in college basketball, the recruiting element was obvious.

From 1983 to 1986 Washington led the Orange in assists and steals. He also averaged over 15 points. Washington brought a New York City swagger to the Dome, making flashy plays all over the floor.

While he didn’t have jittery speed, Washington found teammates all over the floor. Of course, he could also make a play without any help – like he did to take down Boston College with a half-court buzzer beater.

More so than any other point guard in SU history, Washington handled the basketball like a yo-yo. Just when defenders thought they could swipe the ball away, Washington would reel it back and finish them off with a crossover. He was nearly impossible to guard one-on-one. But with his incredible court vision, teams couldn’t double-team Washington either. One way or the other, he was going to burn the opponent.

Besides putting Syracuse on the national scene, Washington helped the Big-East gain notoriety. The recently formed conference relied on SU’s electric point guard for increased recognition. And for Pearl, the bigger the stage, the brighter he shined.
...

Syracuse Basketball: A look back at past Boeheim’s Army performances in TBT (itlh; Peelman)

Boeheim’s Army has been blessed to be a part of The Basketball Tournament (TBT) every year since 2015. We look back at each team and look at what went right, what went wrong, and the best moments the Orange alumni team has had.

Boeheim’s Army, a collection of Syracuse Basketball alumni, has had the honor of gracing our TV sets every summer. Not surprisingly it wasn’t always that way. After students graduated, left early for pro careers, or transferred to another school to play, we often didn’t see them in Syracuse playing basketball again unless it was for charity or a celebrity basketball game during Orange Madness at the Carrier Dome to hype up a season.

The Basketball Tournament, also known as TBT for short, gave these former student-athletes a chance to get together once more (or in some cases, several times more) and extend their Orange careers, whether they’re past their best playing days or not.

Starting in 2014, The Basketball Tournament, had the ingenious idea of filling the summer basketball void by creating a tournament where players build their own teams and compete for a cash prize. The cash prize in 2014 was $500,000, but would increase to 1 million dollars in 2015, and eventually $2 million in 2016, according to ESPN.com. (In 2020, the cash prize in a paired down field of 24 teams will be $1 million, according to TheTournament.com) Even though Boeheim’s Army did not enter in TBT’s first year, the success of that first summer tournament opened the door for their entrance in 2015.
...

You are being redirected... (accnation.net; podcast)

On this episode of ACC Nation Podcast/Radio we take a look at the preseason ACC Nation Power Poll. Plus the latest Pick Six Previews’ Top 25 and how ACC Nation teams are ranked. We toss in Athlon Sports’ Top 50 college football players to give you a taste of what’s to come. Then, a look at the number of AD’s in the ACC with the gravitas that it takes to become commissioner.

With the latest COVID 19 reports going south there is concern that some teams may be in a bad spot. We highly recommend wearing a mask especially if you expect sports to return anytime soon.

In the coming weeks we’ll be talking with the likes of A.J. Black about Boston College and Mike McDaniel about Virginia Tech as our annual football previews crank up. At the same time we’ll sneak in some great information from sports publications. On the list, Athlon Sports, Lindy’s and Street & Smiths to help round out your knowledge base.

Brett Ciancia at Pick Six Previews has brought out the salty dogs. His annual Top 25 and review of teams stirs the pot.

Who are the ACC Nation players in Athlon Sports’ Top 50 college football players list? We run down the list which has a nice mix of offensive and defensive players. Who are the four quarterbacks that have made the list?

It takes gravitas to make things come together, to make things happen as an ACC Commissioner. John Swofford has proven that he has it. We look at the list of potential candidates that may replace Swofford next year. Gravitas is in full display with these individuals.

As a sidebar the guys look at adding a new team or two to the conference. The new financial realities brought about by the pandemic may necessitate some geographic shifts. Who would you add?

Some thoughts on John Swofford and what he has delivered for the ACC.
...

Swofford is retiring as commissioner at the end of the 2020-21 academic year, is the last of the six original BCS commissioners (SI; Barnhart)

When John Swofford announced that he was retiring as ACC Commissioner in June of 2021, a significant page in the history of college athletics was turned.

You may disagree, but to this correspondent the modern-day enterprise of college athletics is divided into two parts: Before the Bowl Championship Series and after.

Because it was the BCS, launched in 1998, and the dollars generated by it that set college athletics on a path to the College Football Playoff, which was started in 2014 and now pays out about $608 million per year. It changed everything.

Swofford, who has been the ACC commissioner for 23 years, is the last of the original six conference commissioners who formed the BCS.

Here is the list of those commissioners with their successors in parentheses:

Steel is going up at a giant Amazon distribution center in Clay that will employ 1,000 people when it opens in 2021.

A portion of the five-story, 3.8-million-square-foot building’s foundation has been built and cranes are putting steel beams in place. When completed, it will be one of the largest warehouses, in terms of floor space, in the world.

Construction began in early March at the former site of the Liverpool Public Golf and Country Club at the northwest corner of Morgan Road the Liverpool Bypass. Little remains of the 111-acre golf course, which operated for 73 years.

Developer Trammell Crow Co. has a tight deadline to meet. The $350 million distribution center is scheduled to open in the fall of 2021, in time for the Christmas shopping season.

Though the facility will employ 1,000 people, it will be one of Amazon’s most automated distribution centers. Amazon says it will utilize the latest in robotic technology and serve the entire Upstate New York area and bordering states. 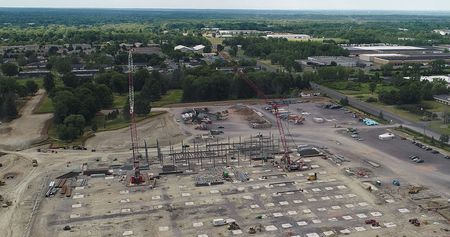