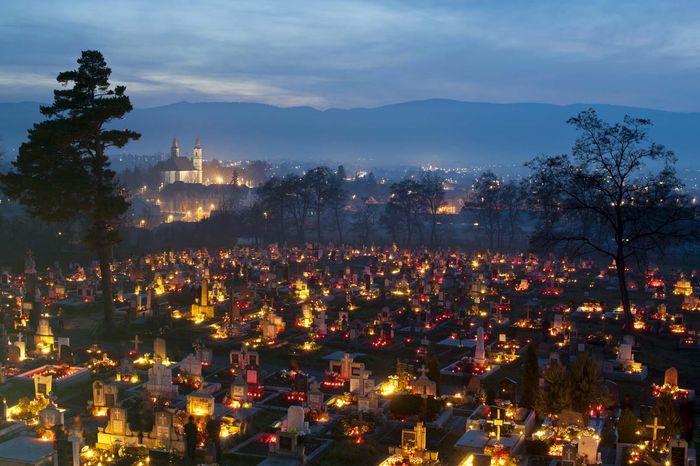 Welcome to All Souls' Day!

All Souls' Day commemorates the souls of deceased Christians. It developed out of All Saints' Day, and is associated with that holiday and Halloween. There are a variation of beliefs and practices observed among different churches on the day.

For Catholics, the day is for praying for the souls of those who are dead and in purgatory. In the late tenth or early eleventh century, Saint Odilo of Cluny decided that All Souls' Day would take place after All Saints' Day. All Catholic monasteries that were dependent on the Abbey of Cluny were to observe the day. Monks were to make prayers, alms, and sacrifices for those in purgatory. From here, All Souls' Day spread to other Western churches.

For Anglicans it is an optional holiday, an extension of All Saints' Day, used to remember those who have died in faith, especially relatives. It was not observed much by the Anglican Church during the Reformation, but began being celebrated again by some parishes in the nineteenth century, and was revived even more during World War I, when there was a need to mourn for those who had died in the war.

Syracuse Basketball: Best bets for Orange in the 2022 class, per analysts (itlh; Adler)

Several recruiting analysts have chimed in on who they think Syracuse basketball is in the best shape with in the 2022 class.

Syracuse basketball has one commit in its 2022 class, five-star point guard Dior Johnson, and the Orange continues to pursue a bevy of other top-flight talents in this cycle.

Since these players are only in their junior seasons of high school, their recruitments could have a long way to go, however, I recently asked two well-regarded analysts in separate Q&A sessions whom they think the ‘Cuse is most likely to land in the 2022 class.

Jake Weingarten, the founder of Stockrisers.com, said that if he had to pick one prospect for Syracuse basketball in the 2022 cycle, he would go with either four-star shooting guard Roddy Gayle Jr. or three-star center Riley Mulvey.

Recruiting analyst and journalist Mike McAllister, the publisher of SyracuseOnSI, says that he believes the Orange is in the “best position” with Gayle and four-star wing Justin Taylor. McAllister adds that “Mulvey likes Syracuse a lot as well.”

Syracuse basketball is in a strong position with a handful of elite prospects in the 2022 class, according to two recruiting analysts.
...

An abundance of Syracuse basketball targets across various cycles are on high-school squads ranked in a pre-season national ballot.

Syracuse basketball continues to pursue a wide variety of elite prospects throughout the next few classes, and the teams whom these players suit up for are expected to thrive in the upcoming campaign.

Ronnie Flores, the national grassroots editor for BallIsLife.com, has published a list of the pre-season top-50 groups at the high-school level for the 2020-21 term, and we’ve detailed below the squads which include Orange targets.

Recruiting analysts have said that Syracuse basketball has a solid chance to secure the services of 2022 three-star center Riley Mulvey, however, competition for the talented big man continues to intensify.

At this juncture, per recruiting services, the 6-foot-11 Mulvey has eight scholarship offers, and they’re from the Orange, Albany, Bryant, Iowa, Massachusetts, Penn State, Siena and Yale.
Jake Weingarten, the founder of Stockrisers.com, conducted a recent interview with Mulvey, who says that other programs to recently show interest in him include Kansas, Iona and Providence.

Those are some strong squads. Kansas is one of the top teams around the country. Iona, now coached by previous ‘Cuse assistant and two-time national champion Rick Pitino, is doing extremely well on the recruiting trail of late.

While Corona Centennial High School may not prove quite on the national level of Johnson’s former home, the powerhouse prep-school program at the Oak Hill Academy in Mouth of Wilson, Va., I want to make something abundantly clear.

The 6-foot-3 Johnson, a five-star point guard who is rated No. 3 across the country according to 247Sports, is heading to a tremendous team.

During the most recent stanza, per this Los Angeles Times article, the Huskies wrapped things up at “27-5, won the Big VIII League title and was ranked No. 2 in the Southern Section Open Division at the end of the regular season.”

For these accomplishments, the head coach at Corona Centennial High School, Josh Giles, got named The Times’ boys’ basketball coach of the year.
...

Syracuse basketball traveling to Rutgers is one of numerous awesome battles in the 2020 ACC-Big Ten Challenge, and we examine these games.

This annual event is tons of fun, pitting two of the premier leagues across college basketball. After a down year in 2019-20, the Atlantic Coast Conference is expected to regain its spot, along with the Big Ten Conference and a few others, as the best leagues around the country.

The 14 games in the 2020 ACC-Big Ten Challenge will take place on Tuesday, Dec. 8 and Wednesday, Dec. 9, as first reported by CBS Sports’ Jon Rothstein and later confirmed in an ACC press release.

All of these encounters will air on ESPN’s networks, the ACC says. Since the event’s inception, the ACC is 12-6-3 in the challenge and 133-106 in individual affairs.

What follows below is our take on ranking each of the bouts within the 2020 ACC-Big Ten Challenge. As always, we seek out your feedback!

Illinois at Duke
Duke is, well, Duke. The Blue Devils always lose top-flight talents to the pro ranks, and then they reload. Illinois is going to be a top-four squad in the Big Ten during the 2020-21 stanza.

North Carolina at Iowa
The Tar Heels will rebound after a brutal 2019-20, and Iowa is a pre-season top-five crew, per some national pundits.
...

Should 2022 five-star point guard Dior Johnson not play for Syracuse basketball, that could shift some things around in the team’s 2022 cycle.

Ever since 2022 five-star point guard Dior Johnson revealed this past February that he had committed to Syracuse basketball, some Orange fans have understandably feared that the elite prospect would never make it to the Hill, and head straight to the professional ranks instead.

Given recent developments surrounding Johnson, who has enrolled in a new high school on the West Coast but has still moved around a lot in recent years, it’s logical to think that he could potentially forgo college for the NBA’s G League, although this is pure speculation for now.

However, if Johnson doesn’t ever arrive in Central New York to compete for the ‘Cuse, that could absolutely change the make-up of the Syracuse basketball 2022 class. For one, the Orange would have an additional scholarship available in this cycle to secure another guard, wing or even a big man.

Recruiting analyst and journalist Mike McAllister, the publisher of SyracuseOnSI, said in a recent Q&A session that should Johnson not play for the ‘Cuse, it won’t necessarily change the Orange coaching staff’s priorities.
... 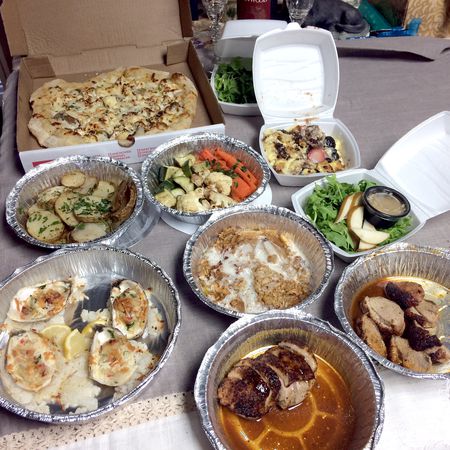 From Moro’s Kitchen in Skaneateles to your table, this is gourmet takeout (Dining In Review) (PS; $; Woodman)

When we last reviewed Moro’s Kitchen, five years ago, we were charmed by a thorough welcome to the comfortable dining room and delighted with a range of excellent dishes. The memory is still pleasant.

This time would obviously be different, with dinner ordered from the new family-style takeout menu. We still hoped for the same quality of food that we would now present for ourselves.

We were not disappointed.

The takeout menu offers several options to serve either two or four people, including one main and two sides. Starters and desserts are ordered separately. We began with baked oysters ($12) and a mushroom and cauliflower pizza ($12).
...
You must log in or register to reply here.