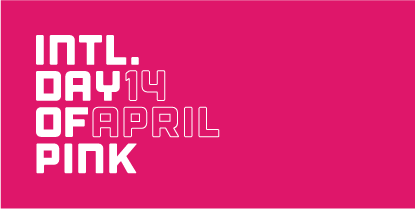 Welcome to International Day of Pink!

International Day of Pink aspires to create a more inclusive and diverse world. It promotes acceptance, equality, and taking a stand against bullying. Pink shirts are worn in solidarity with the 2SLGBTQIA+ community, who continue to face hate, discrimination, bullying, and violence. Keeping the clock from turning back on human rights, educating youth not to repeat the mistakes of the past, encouraging youth to challenge social norms and ask more of their educators, and demanding more from policymakers are some goals of the day.

David Shepherd and Travis Price, seniors at Central Kings Rural High School near Cambridge Station, in Nova Scotia, Canada, started International Day of Pink after they saw a freshman being bullied and threatened with getting beat up for wearing a pink shirt. They bought 50 pink shirts at a discount store and sent emails to their male friends asking them to wear them to school. Their line of thought was that 50 people couldn't be bullied at once. But the "sea of pink" ended up being much larger than they had anticipated. Not only were the 50 shirts worn, but many other students wore pink as well. 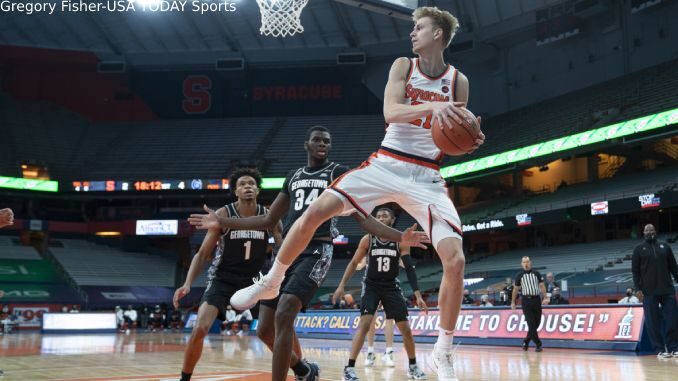 One of the traditional lines Syracuse fans are told in regards to the 2-3 zone is the importance of rebounding. With defenders not having specific assignments on who to box out, defensive rebounding gets harped on repeatedly, often as opponents pile up offensive rebounds and second chance points.

If you are having trouble remembering some recent examples of having this drilled into your head by a commentator during a recent Orange game, here are a couple notes that may jog your memory regarding the importance placed on rebounding, including on defense:
Anyway, as a result of employing that 2-3 zone and its accompanying boxout issues, the Orange tend to find themselves among college basketball’s worst teams when it comes to opponents’ offensive rebounding percentage. In fact, here is where the team has ranked in that stat between 347 and 353 Division One teams in their last eight seasons since moving to the ACC:
...

Alan Griffin may have shocked some people with this decision to declare for the NBA Draft and sign an agent. Did his choice make sense and how will he project at the next level? Plus, how will Griffin be remembered by Syracuse fans? Also, how will AG be replaced for next season? And we get the pulse of Orange Nation on Griffin's decision. Tyler Aki and Tim Leonard discuss it all and more on the Tuesday edition of the Locked on Syracuse Podcast. Follow the show on Twitter @LO_Syracuse and... In the midst of a busy offseason, five-star Kamari Lands, ranked 19th in ESPN’s top 60 players in the class of 2022, announced his commitment to Syracuse. He was the first in his class to choose Jim Boeheim and the Orange.

“It’s always been one of my favorite schools growing up. (I like) how they develop guards, (especially) the past people that have been there have been big guards, kind of my prototype,” Lands said. “I definitely see myself fitting in that process.”

But after a couple years, Lands transferred to Prolific Prep, another basketball centric school that competes around the country. A move that not only made sense for his trajectory as a player, but has developed his game.
...

Steve and Paulie start the show assembling their ideal starting 5 for Syracuse Men’s Basketball next season. Later, they discuss the possibility of life without Quincy Guerrier and wonder if any player will be as polarizing amongst the fan base as Kadary Richmond. Later, Paulie shares how he got scammed trying to buy a prize for ESPN Radio Syracuse’s Tournament Challenge bracket contest.

A Southeastern Conference team appears to be moving out in front in the sweepstakes for Syracuse basketball 2022 five-star target Brandon Huntley-Hatfield, at least according to several recruiting analysts.

The Orange offered a scholarship to the 6-foot-9 Huntley-Hatfield last December, at which time he put the ‘Cuse in his top six, along with Ole Miss, Kansas, Wake Forest, Tennessee and Auburn.

Huntley-Hatfield, a junior at Scotland Campus in Scotland, Pa., had for a while now received a lot of buzz from analysts in the direction of SEC squad Ole Miss.

However, more recently, another SEC group, Tennessee, is picking up predictions from recruiting insiders as it relates to Huntley-Hatfield, who is almost universally deemed the No. 1 power forward in his class, as well as the No. 1 prospect in Pennsylvania and a top-10 player overall in the 2022 cycle.

Huntley-Hatfield is considering a possible reclassify up to the 2021 class, and the Volunteers would be a logical landing spot for him, given that he is originally from Clarksville, Tenn. The Volunteers program has also fared quite well on the recruiting trail of late.
...

Most would take what transpired for the Virginia Tech men's basketball team in head coach Mike Young's second season.

Another top-five win during the nonconference portion of the schedule, finishing third in the ACC to tie the highest finish in school history and making the NCAA Tournament.

Overall, HokieNation must feel pretty proud of a job well done by Young and Co., especially when you put in perspective it all was happening during the midst of pandemic due to Covid-19.

For the players and staff, it still stings a bit with how the season ended, falling in overtime in the first round of the NCAA Tournament to seventh-seeded Florida (15-10, 9-7 SEC) at legendary Hinkle Fieldhouse. But, looking back, they will hold their heads high.

THE START
Tech (15-7, 9-4 ACC) began the season on Nov. 25, which was about two weeks behind when the season normally begins, due to Covid-19, and took on nearby Radford (15-12, 12-6 Big South) and earned a 77-62 win at Carilion Clinic Court at Cassell Coliseum. Redshirt junior Keve Aluma started off his Hokie career with a bang, scoring a then-career-high 19 points versus the Highlanders.

But the true 'bang' came three days later, when the Hokies got to take on then-No. 3/3 Villanova (18-7, 11-4 BIG EAST) in Uncasville, Connecticut Nov. 28. The game was originally supposed to be Tech and Temple (5-11, 4-10 American), but the Owls had a positive within their Tier-1 testing group and had to cancel the game. But the Naismith Hall of Fame organization, which put on the tournament in Bubbleville, acted quickly and scheduled Tech and 'Nova to play.
...

"We are excited to add Noah to our roster for the coming season," said UofL Head Men's Basketball Coach Chris Mack. "Our staff is very familiar with Noah having heavily recruited him out of high school. Noah is one of the best pure shooters in the country who can do it on the move, off the dribble and in transition. His college experience at the SEC level has him prepared to provide a huge boost for our program. We are thrilled to add a player of Noah's caliber to the backcourt."
... 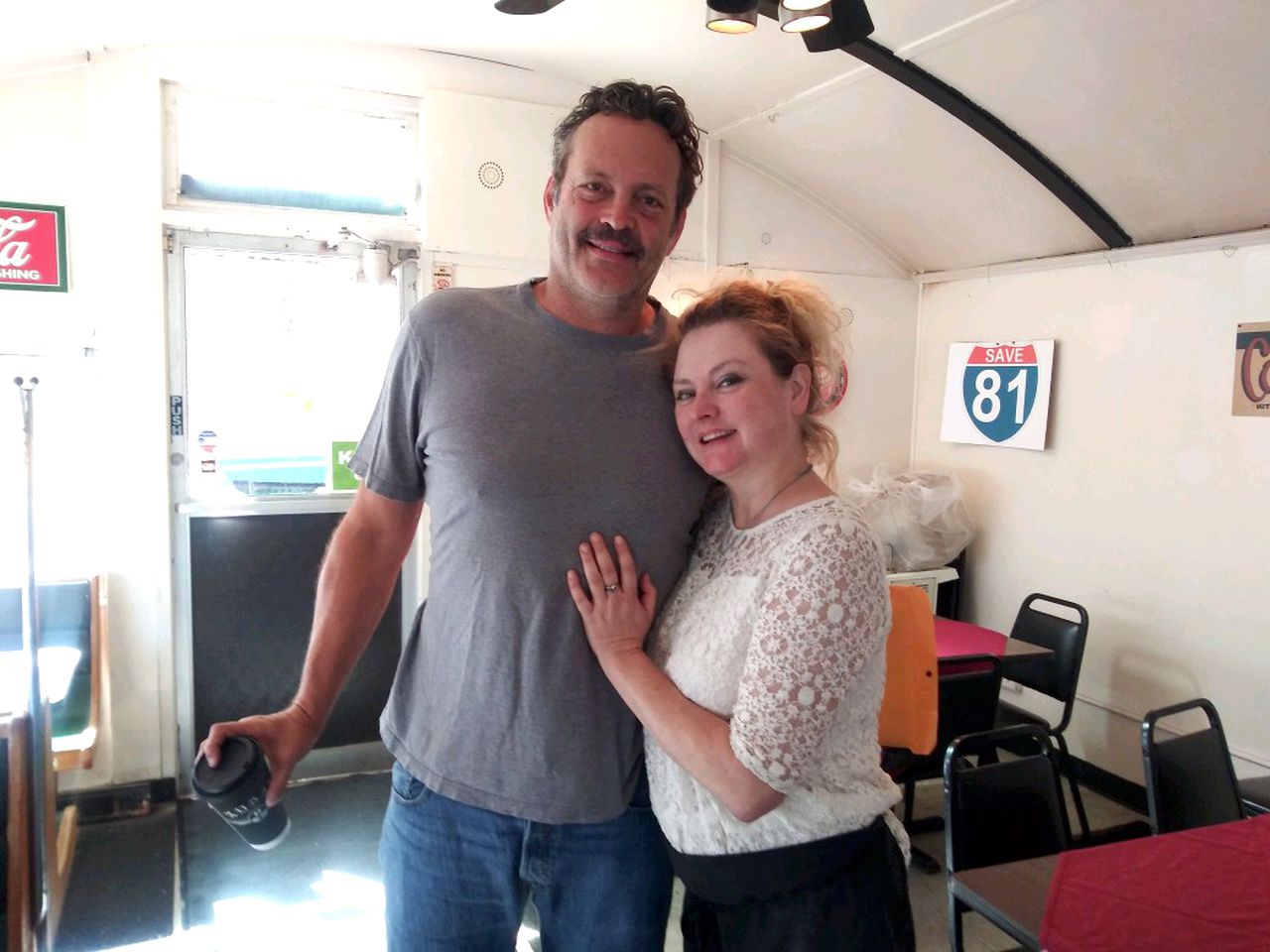 Actor Vince Vaughn with waitress Becca Tousant at JJ’s Miss Syracuse Diner in 2019. Vaughn was in town filming a movie nearby. (Photo courtesy of Becca Tousant)

Downtown Syracuse diner to close for good: ‘Covid got the best of us’ (PS; $; Cazentre)

It’s hard to run a diner without customers, and they have been in short supply in downtown Syracuse for the past year, says Joe Todisco.

That’s the reason Todisco is closing JJ’s Miss Syracuse Diner, the little place across from Syracuse City Hall he took over in 2010.

“Covid got the best of us,” he said. “There’s just nobody out, so many workers downtown just aren’t back yet. I’ve been thinking about this for months, and the numbers just aren’t there.”

The Miss Syracuse was last open in mid-January, but Todisco closed then to take an annual winter vacation. He’d hoped to reopen this month, but has decided against it.

The Miss Syracuse occupied space in a classic diner car building at 258 E. Water St. It’s had many operators over the years including Dan Galloway and, briefly, long-time Syracuse restaurateur Charlie Roman.

“It’s a good spot when people are working downtown,” Todisco said. “When City Hall was in full force, we were busy. But right now you could come down here at noon any day at not see anyone out.”

The building is owned by landlord Jim Piazza.

Todisco isn’t completely done with the food business, though. He plans to keep his stand at the New York State Fair (assuming there is one in 2021. JJ’s at the Fair occupies a prime spot on Restaurant Row.
...

Wes Johnson has a sadz now.

Yup, a lot of ear to ear smiles with these three guys. You know it's a good smile when you can just picture the picture without looking it up.

Jonny Flynn also comes to mind here...
You must log in or register to reply here.