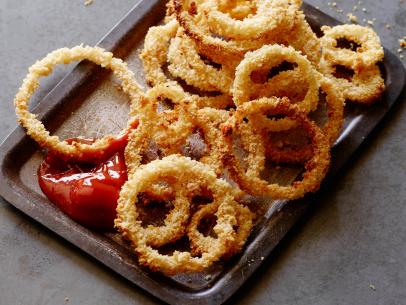 Legend has it that French King Louis XI requested a new snack be made for him in 1469. He was presented with onion rings, he didn't like them, and then he had their inventor killed. While this was the end of the inventor, thankfully, this was not the end of onion rings. Made of onions cut into rings (or sometimes of onion paste) and dipped into batter or bread crumbs and then deep-fried, they are popularly eaten nowadays as a side dish or on their own.

Even after taking King Louis XI out of the equation, onion ring origins still are clouded in grease. A recipe for "Fried Onions With Parmesan Cheese" appeared in The Art of Cookery Made Easy and Refined, a cookbook by John Mollard published in 1802. It called for "cutting onions into 1/2 inch rings, dipping them into a batter made of flour, cream, salt, pepper and Parmesan cheese then deep frying them in boiling lard," and to serve them “with a sauce made of melted butter and mustard.” Early print recipes include one for "French Fried Onions" that appeared in Middleton, New York's Daily Times in 1910, and one for "deep-fried onion rings that are dipped in milk then dredged in flour" that was in New York Times Magazine in 1933 as part of a Crisco advertisement. 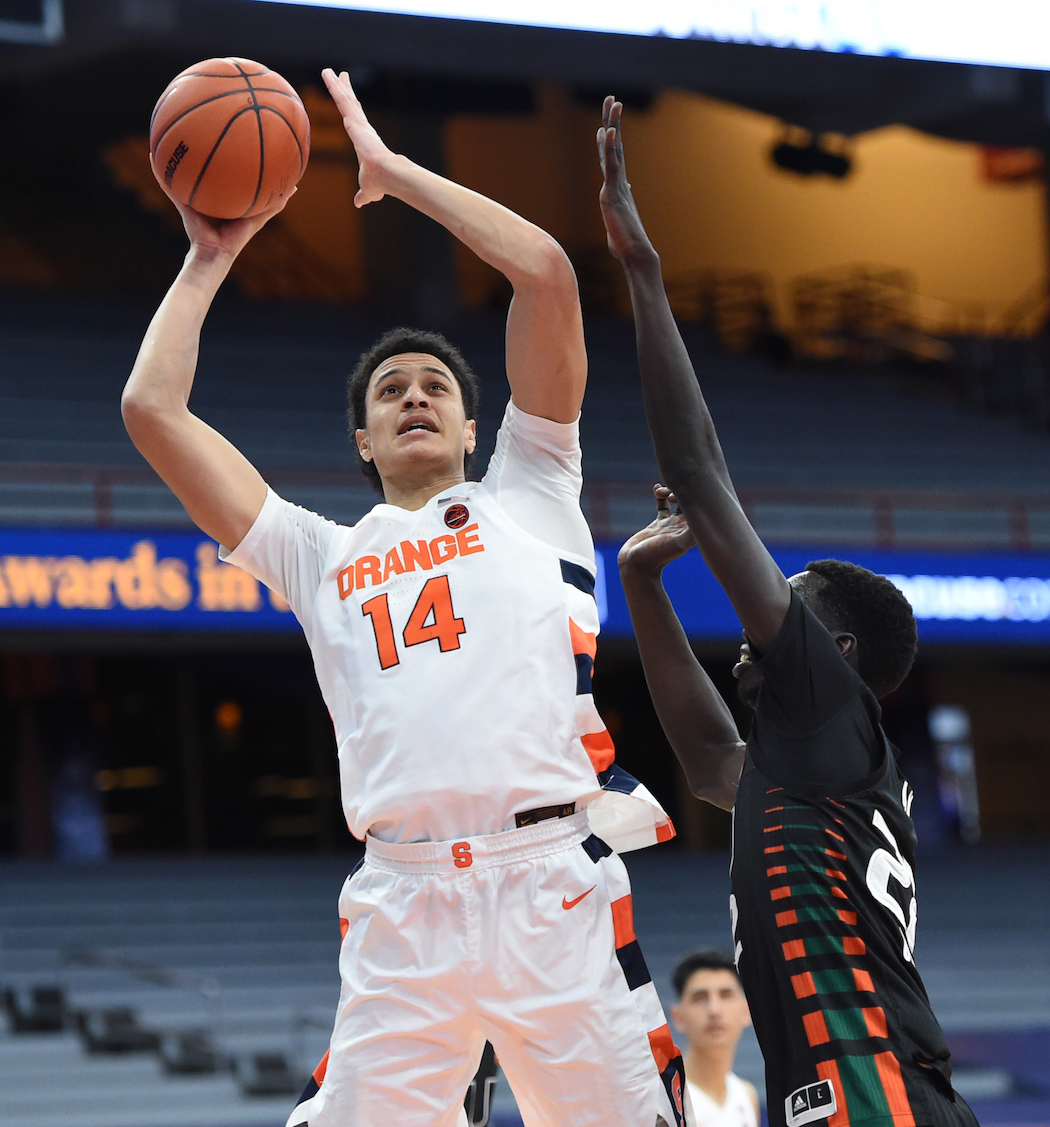 ‘He’s got all of the tools’: Jesse Edwards and the possibilities for Syracuse to imagine (theathletic.com; $; Gutierrez)

In the summer of 2019, as Syracuse trekked to Italy, Roosevelt Bouie joined his former team for the four-game exhibition tour. He was eager to visit one of his favorite places in the world. After graduating from Syracuse in 1980, Bouie played professionally in Italy for more than a decade. But he also wanted a glimpse of what kind of team the 2019-20 Orange would be, and from the beginning of the trip, rising freshman center Jesse Edwards caught his eye. There was something in the way the then 19-year-old glided around the court, moved near the basket and anchored the back of the 2-3 zone. In Edwards, Bouie says, he saw a little of himself.

He still does. Two years later, one memory still reminds Bouie of the player Edwards could someday become. In the play, Edwards jostled for position, then reached for an errant pass near the baseline. He caught the pass, kept his feet inbounds and maintained his space around the rim to finish for two points. It was an early sign that he might blossom into someone the Orange could invest in. Edwards displayed a comfortability near the basket. For Bouie, it all looked so familiar, the sudden and smooth rise up, with a soft release from a rare altitude.

“He’s got all of the tools,” says Bouie, who played 118 games from 1976-80 and whose No. 50 jersey hangs in the Carrier Dome rafters. “He kills it inside with catching alley-oops and finishing plays. He’s lanky, and he has the willingness and desire to be good. When I first saw him, his skill level was where I was as a junior. He’s got that smart, Euro-style game on the inside.”
...

The Syracuse men’s basketball team will play an exhibition game against neighboring Le Moyne College on Nov. 1 in the Carrier Dome.

The game will be the second exhibition contest scheduled for the 2021-22 Orange. SU will open its season with an exhibition game against Pace on Oct. 27 in the Dome. Le Moyne and Pace are Division II teams that compete in the Northeast-10 Conference. 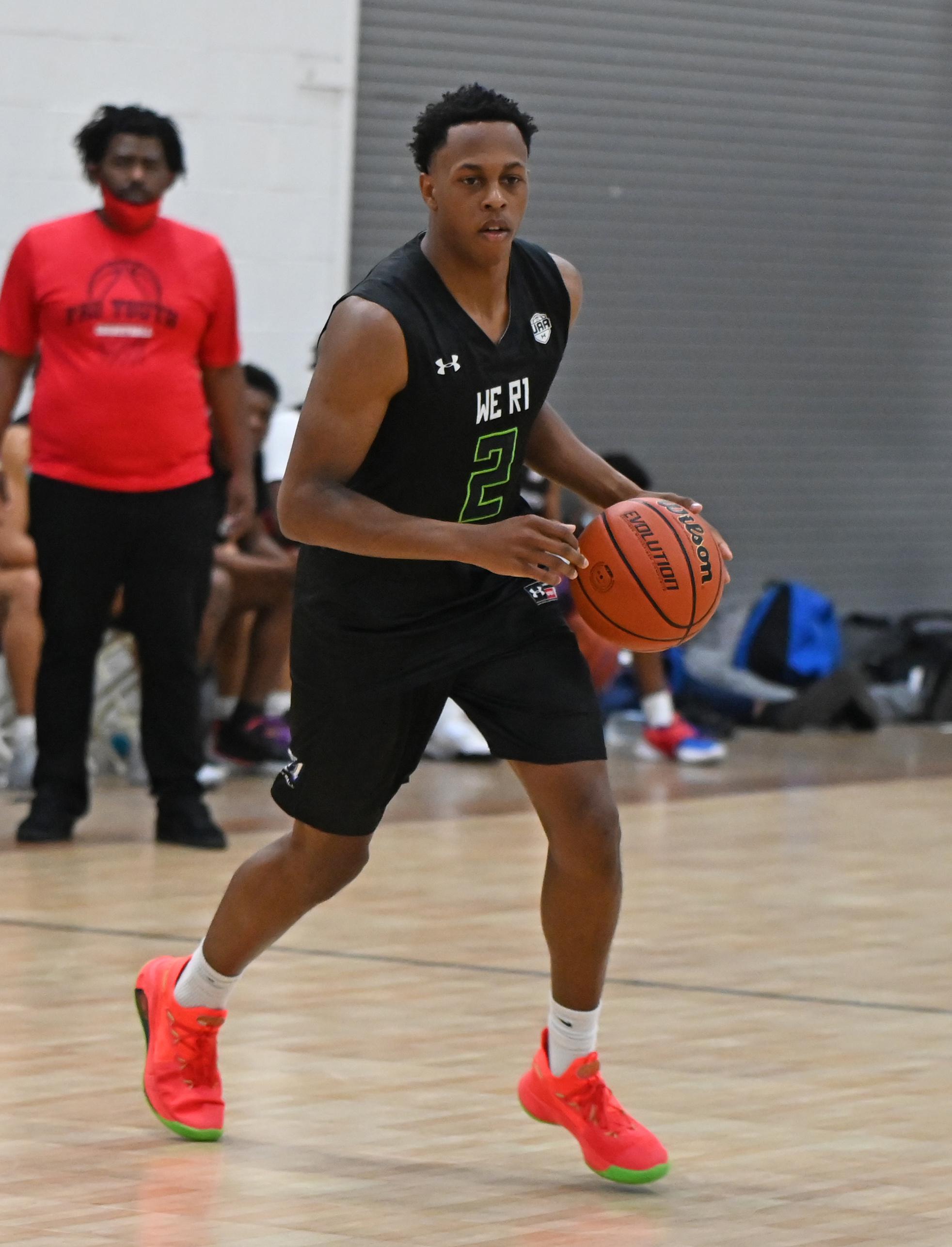 Elmarko Jackson is an under-rated and talented point guard in the 2023 class, and I think that he would thrive in the Syracuse basketball system.

The 6-foot-3 prospect is a sophomore at the Academy of the New Church in Bryn Athyn, Pa. As the primary recruiting services update their national rankings for the 2023 cycle, I feel confident that Jackson is going to emerge as a top-100 player, and he could get rated even higher than that.

I came across multiple comments from analysts and recruiting insiders on Twitter of late that suggest Jackson’s recruitment is on the verge of blowing up. recently published updated national rankings for the top-100 prospects in the 2023 class, and Jackson is four stars and No. 31 overall.

According to Jackson’s own Twitter page as well as his bios on various recruiting Web sites, he already holds a bunch of high-major offers, from teams such as Seton Hall, Maryland, California, Ole Miss, La Salle, Rider, Siena and VCU.

A recent tweet from Pro Insight director of scouting Andrew Slater about Jackson reads in part, “Would like to hear from Syracuse, Georgetown & Ohio St.” We’ll obviously keep tabs on any and all involvement that Orange coaches have in Jackson’s recruiting process moving forward.
...

Item: We all know Jim Boeheim’s going to coach forever, right? But whenever it is time to announce the name of only the eighth basketball coach in Syracuse program’s current 118 years of existence, the likelihood is overwhelming that Boeheim’s successor will have a Syracuse pedigree.

Those in business leadership always have to cover their bases. Especially in today’s world of instantaneous communication. Once something is uttered in real time at an event or on social media, it’s permanent, no deleting.

So, naturally, Syracuse athletic director John Wildhack has to proclaim that when it comes time to zero in on a successor to Boeheim’s legendary career building the program’s regional name to national prominence from scratch, he says he’s going to find the best candidate to take the reins, period.

“We’re (proceeding) as we did with men’s lacrosse,” Wildhack said at his June 15 academic year-end press conference. “We hired Gary (Gait) not because he’s an alum, because we thought he was the best person to be the leader of our men’s lacrosse program. We’ll apply the same criteria to our men’s basketball program.”

While that certainly sounds like a person in charge, consistently evaluating performance and reviewing the succession plans for each of the seven men’s sports and 11 women’s sports programs Wildhack oversees, after what North Carolina by appointing alum and assistant coach Hubert Davis to now follow the retired Roy Williams, and Duke following suit identically with the selection of John Scheyer to take the reins in 2022 from Mike Krzyzewski, how can Boeheim’s successor NOT be a current member of the coaching staff and alumni to boot?
...

Yeah, I know, bracketology projections for Syracuse basketball and its peers around the country at this juncture are super premature and a little silly.

But they’re still fun, right? Particularly when ESPN’s resident bracketologist, Joe Lunardi, has the Orange slotted as the last team in for his latest projected field of 68.

Some ‘Cuse fans have a love-hate relationship with Lunardi, and he’s not shy about acknowledging that fact. Regardless, Lunardi moved the Orange down a bit from his previous mock bracket.

In that one, he placed Syracuse basketball as a No. 8 seed in the East Region, with the ‘Cuse set to suit up against No. 9 seed LSU in the round of 64.

More recently, Lunardi arranges the Orange as a No. 12 seed and facing off with fellow No. 12 seed Colorado State in the First Four. No worries. The ‘Cuse seems to thrive as a double-digit seed in March Madness, evidenced by its run to the Sweet 16 during this past spring’s Big Dance.

Syracuse basketball is near the proverbial bubble, according to ESPN’s Joe Lunardi.

Should the Orange conquer Colorado State in the First Four, the ‘Cuse would then square off versus No. 5 seed Connecticut in the round of 64. That is a tantalizing potential encounter between two former Big East Conference rivals within the Midwest Region.
...

When it comes to last season dealing with the pandemic and everything that came along with it, almost every conference was affected in one way or another. But an argument can be made that among the power conferences, it was ACC Basketball that was impacted the most.

After being spared from what would’ve been a brutal Selection Sunday for the conference in 2020 (was projected to get a max of 5-6 bids), the ACC was overall a very mixed bag. Despite having two preseason top-10 teams (Duke and Virginia), none of them finished the season in the top-10. North Carolina bounced back compared to the disastrous season prior but was in the middle, while Duke took the Tar Heels place as the biggest embarrassment to the league, not making the NCAA Tournament for the first time in two decades.

At the top ended up being Virginia and Florida State, along with surprise team Virginia Tech. The Hokies actually finished with the same number of losses (4) as the other two but due to postponed games, finished in third and was placed as a 10 seed as a consequence.
...

Some Recruits That Duke Took Away From Syracuse (DBR; King)

As Duke fans, watching the news break of Mike Krzyzewski’s retirement was pretty personal. He’s always seemed like someone we know very well even though we don’t know him at all, having only spoken to him a couple of times over the years (Boswell is a different story there). We seriously doubt he has any idea who any of us are except for Barry and Jim.

So we’ve processed the news in a different way than other fan bases might and have covered his retirement plan with more affection than most sites.

Not that we’d expect UNC, Kentucky or Maryland fans to genuflect or anything but you get our point.
... 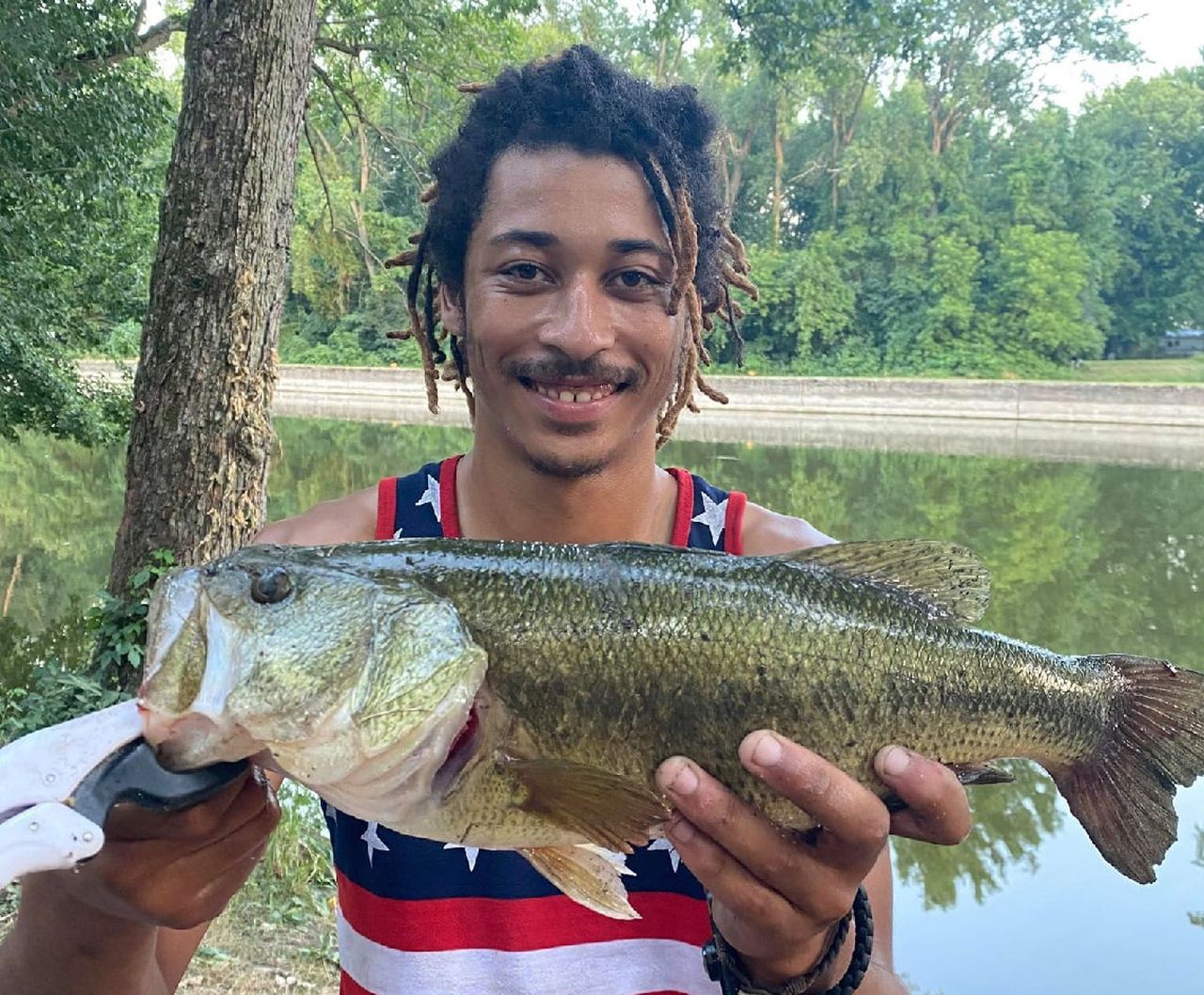 Demond Malik Gary, of Weedsport, holds up a nice largemouth bass he caught on the Seneca River in Montezuma using a Double Down Plopper topwater lure.

Free Fishing Weekend: A great time for novice anglers to try the sport out (PS; $; Figura)

This coming weekend (June 26-27) is a Free Fishing Weekend in New York State.

“New York is home to some of the most exceptional fishing opportunities in the nation and anglers from around the world visit our state’s waters every year in search of their next big catch,” said Basil Seggos, commissioner of the state Department of Environmental Conservation. “I encourage all anglers, from first timers to experts, to take advantage of the upcoming free fishing weekend by casting a line in New York’s waters and experiencing the joy that comes with fishing.”
...