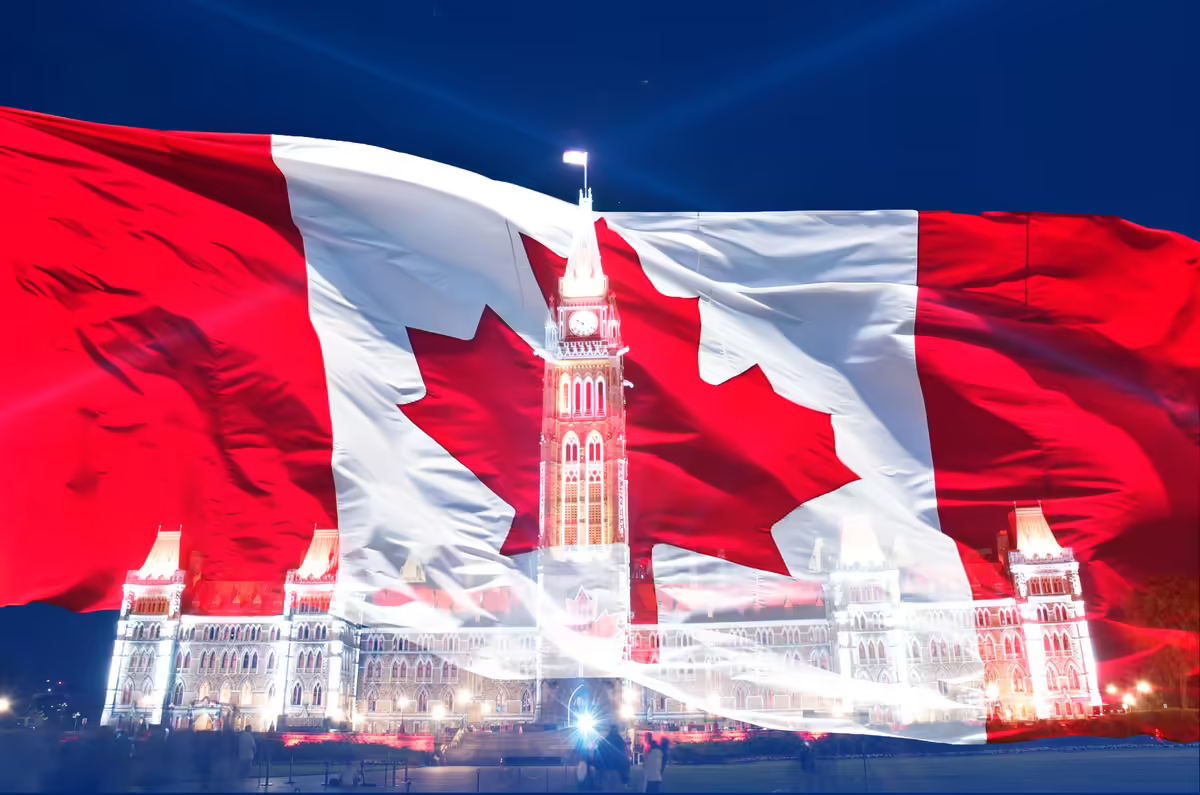 Canada Day celebrates the country's movement to self-government. On July 1, 1867, Canada became a self-governing Dominion of Great Britain, after the passage of the British North America Act. It also became a federation with four provinces: New Brunswick, Nova Scotia, Ontario, and Quebec. These provinces were made from the British colonies of New Brunswick, Nova Scotia, and the Province of Canada (previously Upper Canada and Lower Canada). The Act allowed for other provinces and territories to join the country in the future. Indeed, more land was added, and Canada now consists of ten provinces and three territories.

On June 20, 1868, the Governor General said the anniversary of Canada becoming a Dominion should be celebrated. It became a statutory holiday in 1879 and was known as Dominion Day at the time. The first official celebrations weren't held until 1917, on the Dominion's fiftieth anniversary. It began being celebrated more frequently after World War II, and even more so after the 100th anniversary in 1967. It began being called Canada Day by celebrants and has been officially known as Canada Day since 1983. This was stipulated by the Canada Act of 1982. Canada also became a fully independent country with this act, no longer being under the dominion of Great Britain. 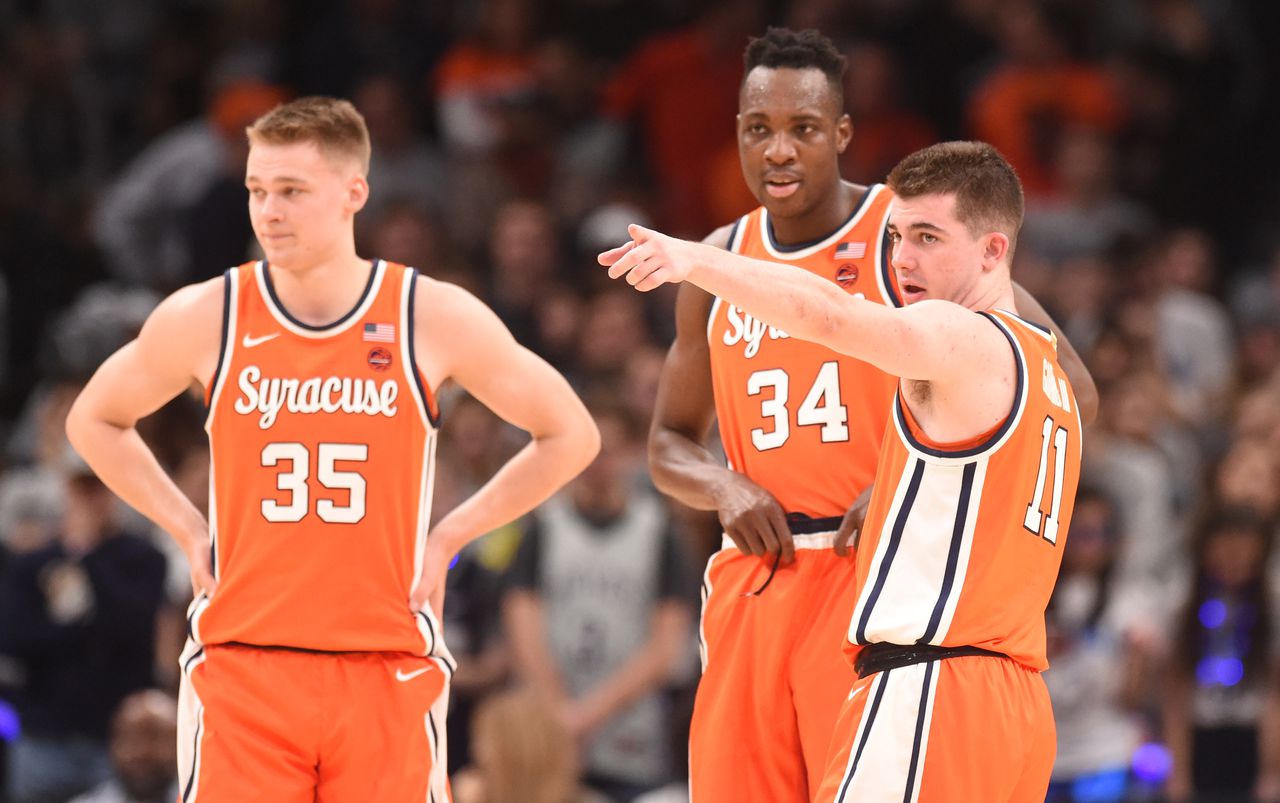 How many scholarships does Syracuse have available for 2022 recruiting class? (Mike’s Mailbox) (PS; $; Waters)

Looking ahead and looking back.

This week’s Mike’s Mailbox begins with an often-asked question regarding Syracuse’s roster situation and the number of scholarships available and then looks back at a recruiting scenario from a few years ago when Syracuse was working with a reduction of scholarships.

Plus, we’ve got questions about Syracuse players in the NBA and Jim Boeheim’s presence on the summer recruiting circuit.

Q: How many scholarships does Syracuse have available for the ’22 recruiting class? What does the roster look like for the 2022-23 season?

Mike: These days it’s really easy to lose track of who’s on the roster, what year are they in terms of eligibility and how many scholarships are available in the coming years.

With players leaving school early and the transfer portal acting as Grand Central Station for basketball players, I had to write down all the players’ names and years before answering this question.
...

Syracuse basketball 2022 high-priority target Donovan Clingan has by all accounts kept his recruiting process close to the vest, not really tipping off any favorite or favorites to potentially land him.

In fact, as we’ve noted in numerous columns in recent months, national analysts and other recruiting insiders have said that they believe the recruitment of Clingan is tough to gauge, in terms of a possible front-runner.


Even with that as context, one of the best analysts in the business has made a projection about where he thinks the 7-foot-1 center will end up.

Eric Bossi, the national basketball director for 247Sports, has predicted that the elite four-star big man will pick Connecticut. Bossi assigns a medium confidence level to his projection for Clingan.

Now, this doesn’t mean that the Huskies have won the recruiting battle over the four-star Clingan, and that by extension the Orange is out of the running. The recruiting world is fluid and fickle, and things can change rather rapidly.
...

Here's why Syracuse basketball recruiting is finally back - The Juice Online (the juice; Irvine)

There was a time when some Orange fans would argue that recruiting hadn’t dipped.

Sure, the team wasn’t winning as much and the Orange hadn’t gotten a top-50 recruit in an Orange uniform in a few years, but head coach Jim Boeheim always said he didn’t recruit based on rankings. He recruited players.

Sometimes it takes a return to normalcy to realize just how bad things were. With Justin Taylor, a four-star class of 2022 forward, joining five-star wing Kamari Lands in Syracuse’s 2022 class, the Orange have jumped to 4th in 247Sports’ composite team rankings. That’s the highest the Orange have been in a long time.

Instead, because the top players end up playing the most and determining how good teams become, it is more instructive to look at the rankings of a school’s top two recruits each year. Examine the chart below, which includes every class since the Carmelo Anthony’s in 2002, and see if you can spot where Syracuse’s recruiting swoon happened:

Syracuse is on a recruiting roll, who might commit next? (cnycentral.com; Tamurian)

Taylor is a consensus Top-50 player that brings so much to the table as a 6'6" wing that can get it done at the top of the zone on defense and just about anywhere offensively.

The other residual effect of Taylor's commitment?

It continues a domino effect.

Back in the spring, SU landed another major recruit in Kamari Lands.

That's now two players in the Top-50 committed for the Class of 2022. The rest of the recruiting world is on notice.

It's almost like the Super Teams of the NBA. Anthony Davis and LeBron James wanted to join forces in L.A., The Nets were able to have Kyrie Irving, Kevin Durant and James Harden come together because of the prospect of combining their talents in a championship quest.

I'm not comparing high school recruits to those incredible NBA stars, but the logic is the same.

That said, here are some of the top names SU is going after in addition to Lands and Taylor in the Class of 2022.
... 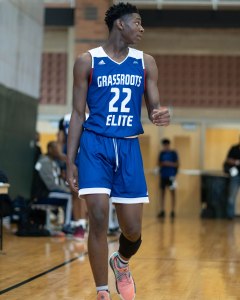 Syracuse basketball, over the years, has fared well recruiting players who hail from Canada, and the Orange offered a scholarship last summer to 2023 five-star prospect Elijah Fisher, one of the best high-school players regardless of class designation or country of origin.

The 6-foot-7 wing is a sophomore at the Crestwood Preparatory College in Toronto, Ontario. Recruiting services list him as either a shooting guard or a small forward.

Despite his recruiting process likely having a way to go, Fisher holds a bunch of high-major offers from teams beyond the ‘Cuse. But one of the top squads in college basketball is reportedly displaying significant interest in Fisher, according to a report.

Jason Jordan, the director of basketball recruiting for Sports Illustrated, said in a tweet that Kentucky is “picking up its interest” in Fisher.

I know what you’re going to say. The Wildcats were pretty awful a season ago. That’s true. But over the past decade, Kentucky is one of the premier teams in the sport, both for its regular-season success and its accomplishments in the Big Dance.
...

The NCAA approved the interim Name, Image and Likeness (NIL) policy on June 30th, to take effect July 1st. Subject to laws in their respective states, student-athletes for college programs across the country are now able profit off of their NIL in what will change the landscape of collegiate athletics forever.

Student-athletes can be paid for endorsing products including on social media, charging for autographs, holding skills camps and other methods. This, of course, as long as it follows state NIL laws. If a state does not have NIL laws in place, it is up to the individual institution to provide parameters.

The NCAA's interim policy will be in affect until federal legislation is passed or new NCAA rules are implemented.

"This is an important day for college athletes since they all are now able to take advantage of name, image and likeness opportunities,” NCAA president Mark Emmert said in a press release. “With the variety of state laws adopted across the country, we will continue to work with Congress to develop a solution that will provide clarity on a national level. The current environment—both legal and legislative—prevents us from providing a more permanent solution and the level of detail student-athletes deserve.”
...

Authentic ACC, a series of original 30-minute specials produced by several ACC schools, will air throughout the two weeks of dedicated programming. These shows will highlight original content and storytelling unique to that institution.

ACC Traditions: Syracuse will premiere Wednesday, July 14 on ACCN. The half-hour program will cover a pair of legendary numbers for Syracuse: the No. 44 for football – worn by Orange football legends Jim Brown, Ernie Davis, Floyd Little – and the No. 22 for men’s lacrosse, started by one of the all-time greats Gary Gait. The show also details the success of the Syracuse men’s lacrosse program, as well as giving fans an all-access look at The Dome.

Packer and Durham, ACCN’s morning show from 7-10 a.m. each weekday morning, will return on Monday, July 19. 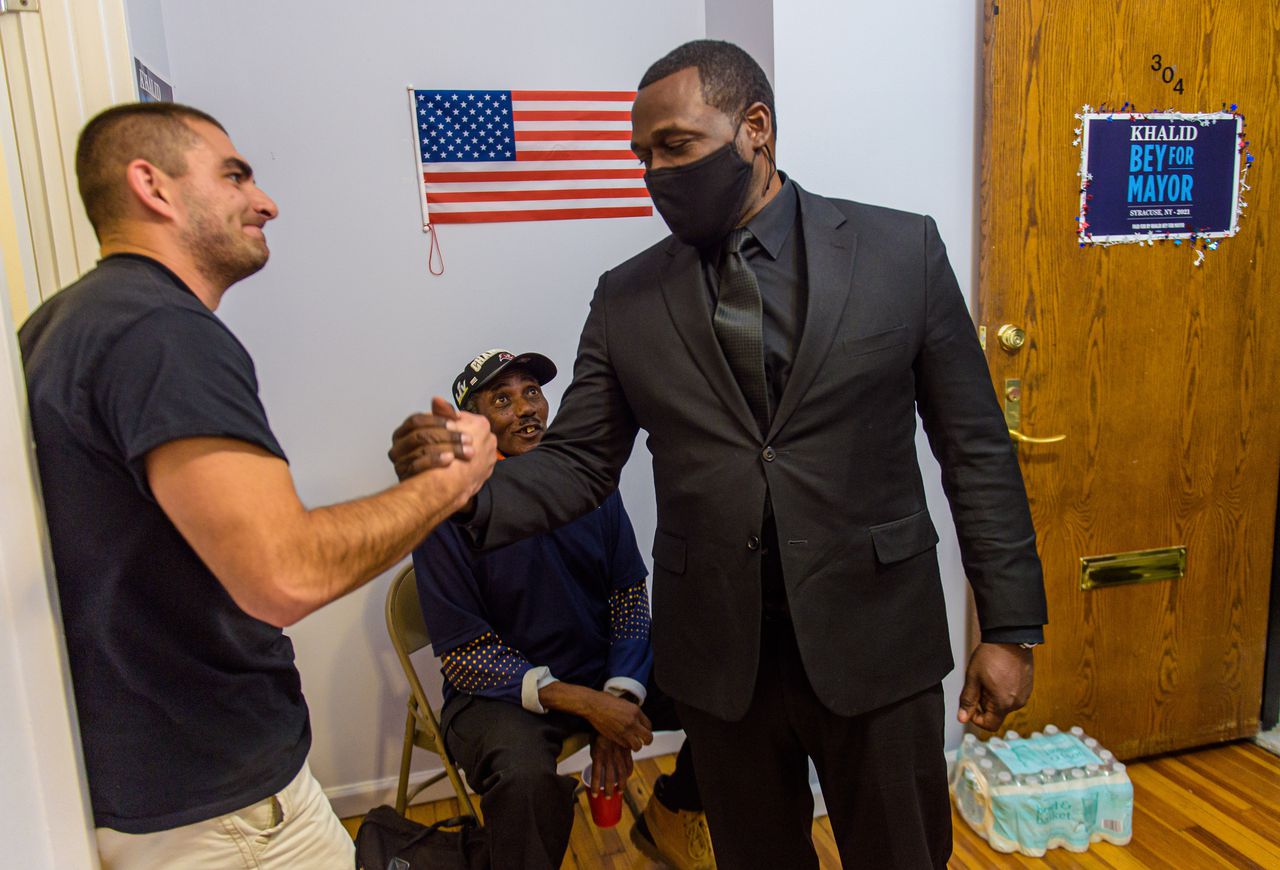 Already, though, Bey has achieved something no other Black politician has: He’s won a major party nomination for the city’s top job.

Bey, 50, won the Democratic Party’s nomination in a nail-biter of a primary race that wasn’t decided until a week after polls closed. With more than 6,000 ballots cast, Bey eked out a win over Michael Greene by just 34 votes. The race was ultimately decided by absentee ballots.

Now, Bey begins the final stretch of the race, where he’s up against Mayor Ben Walsh, an independent, and Republican Janet Burman. That race will mark the first time city Democrats (or Republicans) have chosen a Black candidate as their contender for the mayor’s office.

That doesn’t mean Bey is the first Black candidate to run.
...