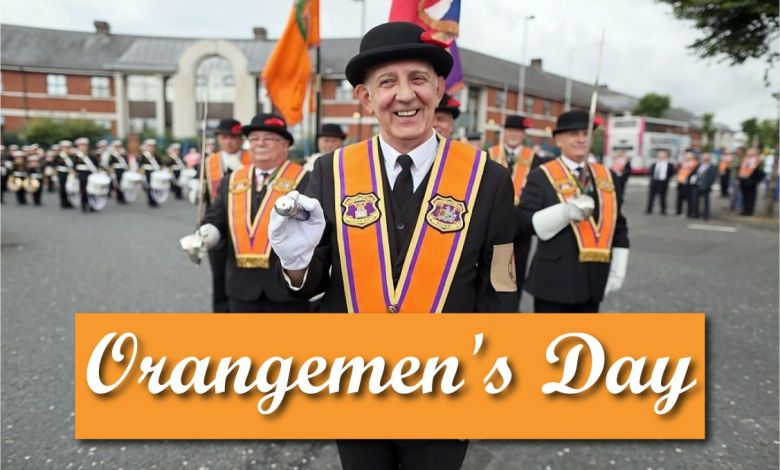 Also known as the Twelfth or the Glorious Twelfth, Orangemen's Day commemorates and celebrates the Battle of the Boyne, fought in 1690, and the Glorious Revolution of 1688, which took place when James II, a Roman Catholic, was deposed, and William of Orange, a Protestant, received his throne. Orangemen's Day primarily is celebrated by people with Protestant Irish or Scottish backgrounds. In some locations, it is observed on the Monday closest to July 12th.

The Battle of the Boyne was fought on July 1, 1690, outside of Drogheda, along the River Boyne, in what now is the Republic of Ireland. Prince William of Orange and James II of England and Ireland, who was also known as King James VII of Scotland, each raised an army of about 30,000 troops, and Prince William came out victorious in the battle. The battle remains a symbol of the sectarian struggles in Ireland between Protestants and Roman Catholics. Not long after it, the defeated Catholics formed underground societies in an attempt to restore the line of James. The Protestants countered by forming the Orange Order.

Buddy Boeheim #35 of the Syracuse Orange reacts following a made … [+] three point basket during the second half against the San Diego State Aztecs in the first round game of the 2021 NCAA Men’s Basketball Tournament at Hinkle Fieldhouse on March 19, 2021 in Indianapolis, Indiana. (Photo by Andy Lyons/Getty Images)

Buddy Boeheim made history last week and he didn’t sink a single three-pointer, make a flashy pass or even work up a sweat doing it.

Boeheim, the 6-foot-6 senior guard at Syracuse and son of Hall of Fame coach Jim Boeheim, became the first college athlete in the new Name, Image and Likeness era to sell gear with his name and also have it licensed with the trademark of the university. Boeheim announced July 2 on Twitter that he had teamed up with The Players Trunk “to bring you my official BUDDY BUCKETS merchandise,” including hoodies and T-shirts that feature an image of Boeheim shooting a ball and the block orange “S” logo for Syracuse basketball.

Syracuse head coach Jim Boeheim and associate head coach Adrian Autry will watch 2022 point guard JJ Starling on Sunday as he and the City Rocks participate in an AAU event in Florida. The Orange coaches have been buys this past week watching several top targets including Quadir Copeland, Kyle Filipowski, Christ Essandoko, Chance Westry and commit Justin Taylor. Now JJ Starling is added to the list. In addition, coach Autry will get a chance to evaluate any other players that may have a big game with him in attendance.

“It was great,” Starling said. “Being from Cuse, you kind of take everything for granted. But being on campus and around the players and coaches, it was a different feel that I didn't expect to have. It was a really, really great visit. The facility is nice. All that.”
...

Syracuse basketball 2021 five-star commit Benny Williams is on the Hill for summer work-outs, and the Orange fan base is so pumped to watch him suit up for the ‘Cuse this coming season.

Williams, a 6-foot-8 forward out of the IMG Academy in Bradenton, Fla., is one of the highest-rated recruits for the Orange in recent program history.

As we’ve detailed in recent columns, the Bowie, Md., native is a top-20 prospect within the 2021 cycle, according to , and he’s universally deemed a top-40 player overall by all of the primary recruiting services.

Of course, Williams has yet to play one minute of college basketball, but the excitement over his arrival in Central New York is logical and understandable.

It’s way too early to know whether Williams will stay on the Hill for just one season and then move on to the professional ranks. A lot of ‘Cuse fans on social media and in chat rooms believe that he’s a one-and-done player. Okay, that’s cool.

For me, I could see it going either way with Williams. If he’s electric as a freshman and gets all kinds of positive NBA Draft buzz, then departing after his freshman campaign would prove realistic.
...

Five-star guard Zion Cruz, who landed a scholarship offer from Syracuse basketball about two years ago, is seeing his recruitment heat up.

According to media reports, the 6-foot-5 Cruz could make a decision on his collegiate destination by the end of this summer. The Orange doesn’t appear to be heavily in the mix for the top-20 player, although you never know for sure in the rapidly changing recruiting world.


Cruz, a junior at The Patrick School in Hillside, N.J., has visited Southeastern Conference member Auburn as well as Oregon out of the Pac-12 Conference, according to reports and recruiting services.

It wouldn’t surprise me in the least if Cruz ends up taking an official visit to North Carolina as well. The Tar Heels, a blue-blood squad and fellow Atlantic Coast Conference participant, recently offered a scholarship to Cruz, per the Verbal Commits Web site.

Another recent offer that arrived for him is from Arizona State, which suits up in the Pac-12 Conference, according to the 247Sports Web site.
...

Syracuse basketball has pursued 2022 four-star prospect Chance Westry for a long time, offering him a scholarship about two years ago.

The 6-foot-5 Westry, an elite guard in his cycle, visited the Hill not too long ago, along with several other official visits that he has taken.

A lot of Orange fans on social media and in chat rooms have opined of late that they don’t think Westry is going to choose the ‘Cuse. And now at least one national analyst has made a projection as to Westry’s eventual collegiate destination.

Jamie Shaw has said on that he believes Westry will pick LSU out of the Southeastern Conference. The Tigers are a strong SEC team that has done well on the recruiting trail in recent years.

Westry, a top-45 prospect nationally in his class, recently went on an official visit to the ‘Cuse, along with Auburn, Nebraska and LSU. There have also been some media reports suggesting he may be in line for a professional deal.

Recently, Westry said via Twitter that he will spend his senior year at Hillcrest Prep in Gilbert, Ariz. A native of Harrisburg, Pa., Westry previously attended the Sierra Canyon School in Chatsworth, Calif., as well as Trinity High School in Camp Hill, Pa.
...

Syracuse basketball got a verbal commitment from 2022 four-star wing Justin Taylor not too long ago, giving the Orange two stars to date in this cycle.

The 6-foot-6 Taylor, a junior at the St. Anne’s-Belfield School in Charlottesville, Va., chose the ‘Cuse over four other finalists in North Carolina, Indiana, Virginia Tech and Virginia.

National analysts have said of late that Taylor is performing quite well in AAU events for his squad, the Washington, D.C.-based Team Takeover. Strangely enough, though, Taylor recently fell in one set of national rankings and is rated way too low in a second one, from my perspective.

ESPN recently updated and expanded its national rankings for the 2022 cycle, and the recruiting service is now including the top-100 players.

Although Taylor wasn’t previously included in ESPN’s national ratings, he has squeaked into the latest version at No. 99 overall. So I guess that’s a good thing.

In my opinion, however, Taylor should be placed higher than No. 99. He’s a top-50 to top-60 prospect. ESPN also has Taylor as the No. 26 small forward and the No. 3 prospect in Virginia.

We should note that Taylor also suits up at shooting guard, and I believe that is the position he’s likely to play for the Orange. Particularly since the 6-foot-8 Kamari Lands, a fellow four-star wing from Prolific Prep in Napa Valley, Calif., has also given a verbal commitment to Syracuse basketball.
...

Syracuse basketball has made scholarship offers to multiple players in the 2023 cycle, and the Orange has reportedly shown interest in numerous other prospects who just wrapped up their sophomore years of high school.

Recruiting service recently published an update of its top-100 players in this class, and we’re going to take a look at where various ‘Cuse prospects are placed in these new rankings.


First and foremost, as we detailed in a recent column, five-star point guard D.J. Wagner is No. 1 across the country in the ratings. Syracuse basketball has reportedly reached out to Wagner, who attends Camden High School in Camden, N.J.

Last summer, the Orange offered elite Canadian wing Elijah Fisher, who fell three spots to No. 7 overall. The five-star prospect is out of the Crestwood Preparatory College in Toronto, Ontario.

Aaron Bradshaw, one of the top centers in the 2023 class, has also reportedly heard from the ‘Cuse coaching staff. The four-star big man, also from Camden High School, entered the rankings at No. 19.
...

Gregg Popovich has been repeating a similar refrain ever since he got the job to coach the U.S. men’s national basketball team. The world, he insists, is catching up.

That was the way the U.S. team that departs next week for the Tokyo Olympics began its slate of tuneup games, a stunning loss on Saturday night — the end of a 25-game home winning streak for U.S. teams with NBA players, and the first time such an American team lost to any national team from Africa.

“In a way, I’m kind of glad it happened,” Popovich said. “That loss means nothing if we don’t learn from it. But it could be the most important thing in this tournament for us, to learn lessons from this.”
...

A pilot aborted a takeoff this morning at Syracuse Hancock International Airport, and the plane went off the runway, according to airport officials.

The twin Comanche with only the pilot onboard went into a grassy area off the side of runway 15-33, airport officials said at about 10 a.m. There were no injuries reported and the airport is expected to reopen soon.

The call for a plane off a runway came in at 8:28 a.m. Sunday, according to police dispatchers.

By 9 a.m., emergency lights could be seen on a runway southeast of the terminal. The airport has been using its southeast-northwest backup runway while reconstruction work is underway on its main runway, which runs east-west.

A departing American Airlines flight (operated by subsidiary Piedmont) to Philadelphia left the gate as scheduled at 8:16 a.m., but flight tracker FlightAware showed that it was still on the ground by 10:15 a.m.
...