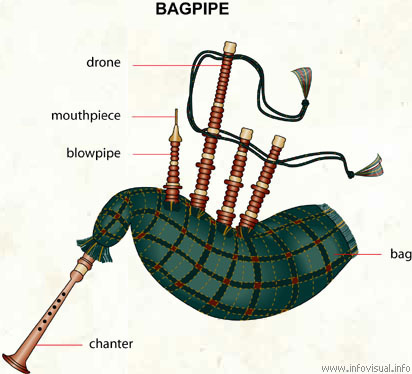 Today we celebrate the bagpipes! The instruments have long been associated with the Scottish Highlands, although they have come from many different places, and there are many variations of them. They have also been used in many different contexts.

The main components of the bagpipe are the bag, chanter, and drones. The bag is usually made of animal skin or rubberized cloth. It is inflated either by having air breathed into it through a blowpipe or by using a bellows. Air can then be fed throughout the instrument to make the sound, by placing arm pressure on the bag. The bag allows sound to be continuous while giving players the chance to take breaths, as well as for several tones to be played at the same time.

The chanter, or melody pipe, has finger holes that let a player make notes to form melodies. The other pipes, called drones, may have single or double reeds. They play single, constant notes that accompany the melody. They are tuned with the chanter by lengthening or shortening their extendable joints. The pipes are in wooden sockets, or stocks, which are tied into the bag. 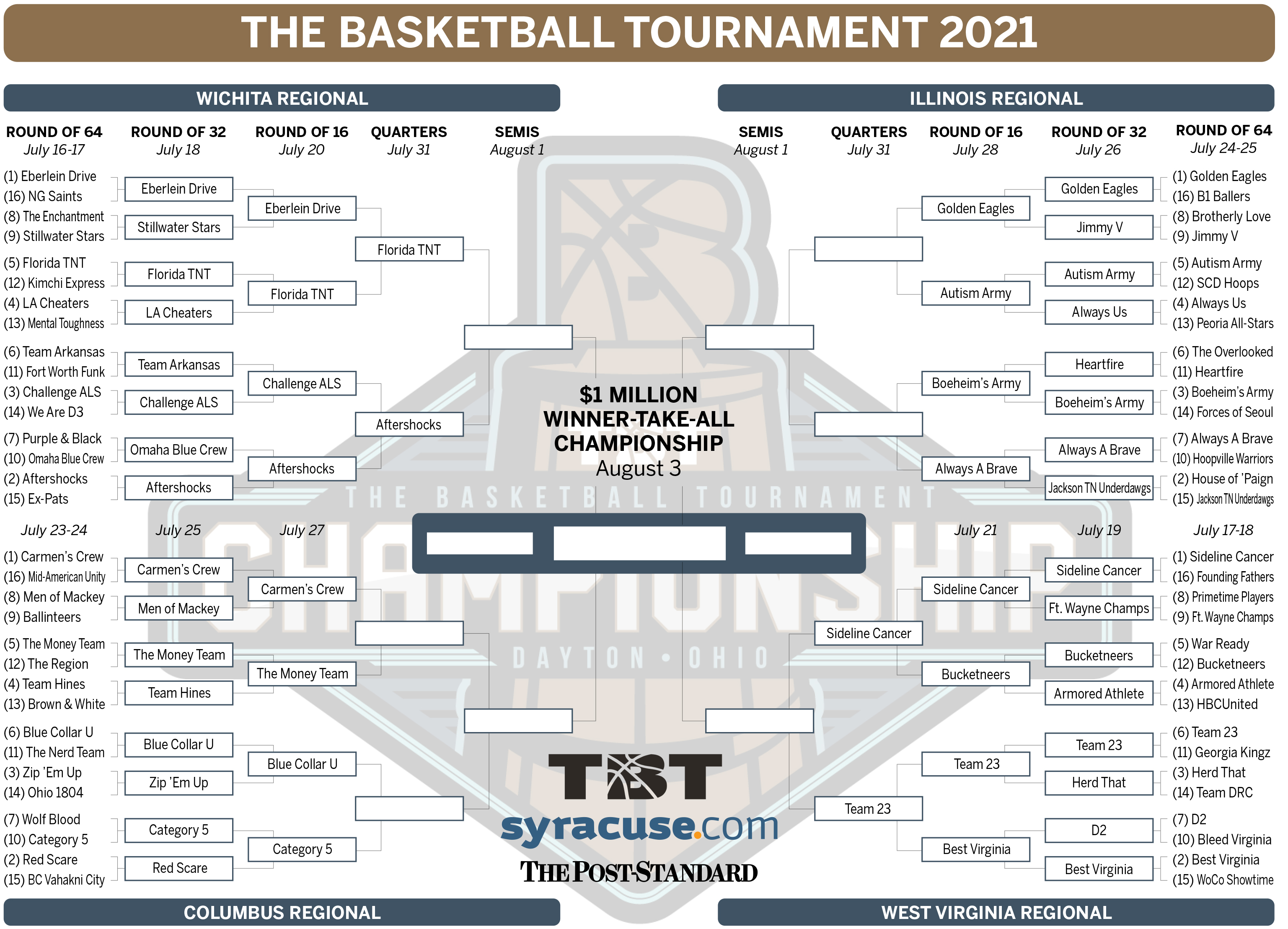 Boeheim’s Army survived and advanced in the second round of The Basketball Tournament on Monday.

Two games are on the TBT schedule Tuesday.

Get to Know Boeheim's Army's Next Opponent: Always A Brave (SI; McAllister)

Boeheim's Army knocked off Heartfire in the second round of The Basketball Tournament 68-62. The Army now faces Always A Brave in the third round. Always A Brave is a Bradley alumni team. With games being played on their home court, Always A Brave will have an advantage. Here is what you need to know about them going into the matchup.

CLICK HERE TO SUBSCRIBE TO THE FREE ALL SYRACUSE NEWSLETTER TO GET THE LATEST ORANGE UPDATES SENT TO YOUR INBOX!

Player: Daniel Ruffin
Position: Point Guard
College: Bradley
College Stats:
TBT Bio: A 3-year TBT veteran as the Always A Brave point guard from 2016-18, Ruffin returns to Bradley alumni team as head coach in TBT 2021 … Completed his first year as boys basketball varsity head coach at Peoria High School, where he teamed with Shaun Livingston for the 2003 Illinois 3A state championship … Point guard for Bradley teams that reached the 2006 NCAA Tournament Sweet 16, 2007 NIT second round and 2008 CBI championship series, then came out of basketball retirement to lead Always A Brave to the 2016 TBT semifinals … Ruptured an Achilles tendon early in that semifinal game against Team Colorado … 2-time All-MVC point guard played his entire senior season in 2007-08 as the nation’s active career assists leader and still ranks third in Bradley history with 644 career assists.
...

A second-half resurgence allowed Team Heartfire to continue its quest for the million-dollar TBT prize, but it was Boehim's Army with the final run in a 68-62 win over Homer Drew's squad on Monday.

The Hall of Fame Valparaiso coach orchestrated a roster that was dominant in a 78-65 first-round win over The Overlooked. They found that same spark for a 13-0 run in nearly three minutes to take a 44-41 lead with 3:27 left in the third quarter against the Syracuse alumni team, named after Hall of Fame coach Jim Boeheim.

AJ Walton scored the final four points of that run to give Team Heartfire a lead, erasing a 12-point halftime deficit. LSU product Aaron Epps scored 13 points with a key 3 in that run. Tevin Mack, who finished at Clemson, scored a team-high 14 points. Lew Wallace grad Branden Dawson did not play in either of the two games.

A deadball rebound was the first stoppage under four minutes in the fourth quarter, starting the Elam Ending. The target score of 67 (eight points added to leading team's score) was set with Boeheim's Army up 59-58 at that point.

Jared Wilson-Frame, of Pitt, hit a 3 to give Heartfire a 61-59 lead before Boeheim's Army went on a 9-1 game-clinching run. That was headlined by dunks from D.J. Kennedy and Chris McCullough, who scored the final four points. Boeheim's Army was led by Keifer Sykes, a Green Bay grad, who scored 17 points off the bench.
...

With speculation that we may be in store for another round of conference realignments, amid the media reports that Oklahoma and Texas are interested in joining the SEC, we felt it was a relevant time to put forth the most amazing super conference for Syracuse basketball.

First of all, you’re welcome. Second of all, if you have feedback, good or bad, please let us know. Thirdly, if you have your own ideas, definitely share them with us!

In drafting this perfect 16-squad super league for the Orange, and it is perfect, we have taken into account a variety of factors, including any previous history with the ‘Cuse, geographic proximity, fun mascot names and a whole host of other ridiculous criteria. Let’s have at it.

Colgate
This Patriot League member has proven terrific on several occasions in recent years, and we could all dress up as toothbrushes and/or toothpaste bottles during games. Hey, dental hygiene is important.

Vermont
I feel like this America East Conference team had some sort of upset over Syracuse basketball in the Big Dance a few years back. Not sure, though.

St. Bonaventure
The Bonnies are a really good Atlantic 10 Conference group. Plus, I just like the name Bonnies.

Boston College
We have to include at least one Atlantic Coast Conference team. The Eagles will provide the Orange with one to two victories every season, right?

St. John’s
I simply want to play at Madison Square Garden every year.

Iona
Rick Pitino is the head coach of this squad. That is all.

Buffalo
Coach Boeheim doesn’t like Buffalo. Naturally, I want them in this league.

Bryant
The Bulldogs, out of the Northeast Conference, nearly knocked off the ‘Cuse a season ago. Solid group.

Oregon
The Ducks seem to pluck away Syracuse basketball players all too frequently.

Rutgers
The Scarlet Knights are trending in a positive direction. Another former Big East foe.

Vanderbilt
My son lives in Nashville, Tenn., so selfishly, I want Vandy in the mix.

South Dakota State
The nickname of this team is the Jackrabbits. Enough said.

Alright, y'all - the NBA Draft is this Thursday, so here's my 20% for basketball: I'm going to give you one last mock draft:

The DBR Podcast crew takes a deep dive into how the likely implosion of the Big 12 could impact the future of the ACC and Duke. We talk about which schools the ACC might be interested in bringing into the fold and what could happen if someone like the SEC comes calling for some of the ACC’s football heavy hitters.

Then, after the break, we are back to basketball with the release of more summer practice scrimmage footage from Durham. Jason Evans actually took the time to chart every single play in the scrimmage video and has some stats to share.

Finally, we wrap it up with the latest from the recruiting trail. One big-time recruit is only days away from making his choice known and we let you in on the latest deadeye shooter that Coach Scheyer is eyeing for Duke’s future.
... 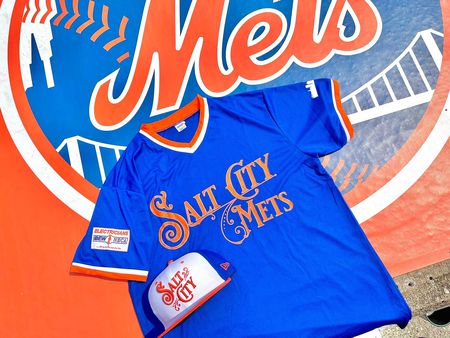 The Syracuse Mets will become the Salt City Mets on Saturday night against Scranton/Wilkes Barre.

The Syracuse Mets are back in Central New York this week for a six-game homestand against the Scranton/Wilkes-Barre RailRiders (New York Yankees affiliate).

Fans can expect to see several promotions if they choose to attend one of the many games at NBT Bank Stadium.

Throughout the week, the Mets will honor local healthcare workers during “Healthcare Heroes Week.” The franchise will also debut its “Salt City Mets” nickname this weekend, along with two nights of fireworks presentations.

Here is this week’s complete list of promotional highlights:

Wednesday, July 28 (6:35 p.m.): Wednesday is Safe At Home Awareness Night, presented by the Joe Torre Safe At Home Foundation. Safe At Home delivers school-based intervention and prevention services to children exposed to violence and trauma, promotes awareness, and provides professional training and consultation to organizations and schools on these issues.

Thursday, July 29 (6:35 p.m.): Dollar Thursday will be known this week as Syracuse Orthopedic Specialists Night. Fans can expect to see the usual dollar specials, including hot dogs and coneys, Coca-Cola fountain drinks and a $1.00 souvenir from the Team Store. $2.00 draft beers are also available.
...

Amazing Grace
You must log in or register to reply here.