Poets believe there is beauty within the flow of words. Similarly, calligrapher’s find beauty assembling those words on paper in an artistic and beautiful fashion. Furthermore, calligraphers design words in a harmonious, almost romantic elegance, respectively.

Calligraphy is an ancient art form that is one of the oldest forms of communication. Interestingly, calligraphy first appears as early as 200 BC in China. Additionally, this historic art form is apparent in almost every region of the world as the main source of manuscript writing and communication. In early findings, religious documents, such as the original Bible, are written in Biblical Hebrew calligraphy. With western influence, calligraphy would take on a more creative point of view.

Quadir Copeland brings a creative flair to Syracuse: ‘We knew he was going to be wearing Orange’ (PS; $; Curtis)

Quadir Copeland’s basketball journey began on hardwood floors and blacktops throughout his home of Southwest Philadelphia.

The game has taken the highly-recruited point guard a couple of hours west to Gettysburg, Pa., back east to Burlington, N.J. and all the way south to Bradenton, Fla., where he’ll spend his upcoming final season of high school hoops at national powerhouse IMG Academy.

After that, Copeland will bring his talents to Central New York to play for Jim Boeheim and the Syracuse Orange.

“I’ve seen a lot coming from where I’m from so being able to show kids — people that I love, that I’ve been around since I was a kid — that it’s possible is amazing,” Copeland said Tuesday after announcing his verbal commitment to SU. “And that’s really the whole goal. It’s just setting up things for the next generation.”

Copeland started the year outside of the Top 100 in the Class of 2022 national rankings, but surged into the No. 85 spot on in late May. The national spotlight isn’t something that intimidates him. It’s something that Copeland has been working towards his entire life.
...

One of the best basketball players to compete in the YAIAA in recent years has committed to one of the most prestigious college programs in the country.

He plans to spend this upcoming year at prestigious IMG Academy in Florida — the school year York County product Jarace Walker plays for.

Then he'll move on to the ACC basketball program famously coached by the legendary Jim Boeheim.

Syracuse reached the Sweet 16 this past season and last made the Final Four in 2016. Boeheim has led the Orange to five Final Fours and 34 NCAA Tournament appearances in 45 years. The program won its lone NCAA national championship in 2003 when future Hall of Famer Carmelo Anthony starred for the program. 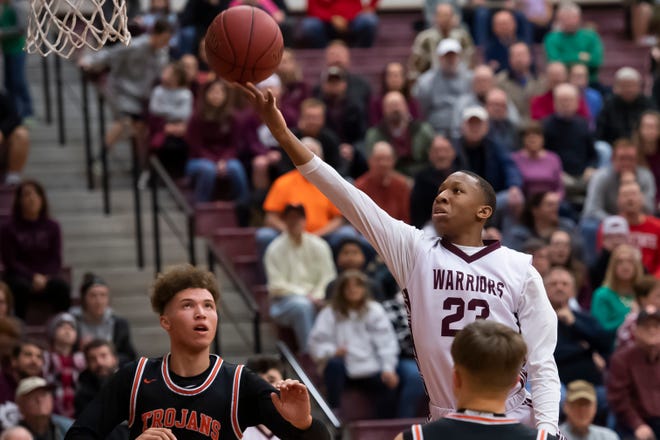 A 6-foot-6 guard, Copeland received numerous NCAA Division I scholarships over the past few years. He recently announced his top eight as Oklahoma State, La Salle, Penn State, DePaul, Miami, Maryland, Oregon and Syracuse.
Originally from Philadelphia, Copeland moved to Gettysburg in middle school and became a varsity player his freshman year. He was a second-team YAIAA Division II all-star as a sophomore, but really blossomed as a junior after he sprouted from 6-foot-1 to 6-foot-6.

As a junior in 2019-20, he averaged 22.1 points, 11 rebounds and 4.2 assists per game and produced incredible highlights on a daily basis. He led Gettysburg to a 22-0 regular season, though the Warriors ultimately finished 23-5 after a dismal postseason.
He was named first-team all-state in Class 5A that year.

But only 16 at the time, Copeland decided to reclassify in the class of 2023 and transfer to a prep school last August. He scored 969 points in his Gettysburg career.
...

The former Gettysburg High School star announced his verbal commitment to play at NCAA Division I Syracuse University in an Instagram post on Tuesday.

Syracuse went 18-10 in 2021, including a 9-7 mark in the Atlantic Coast Conference. The Orange reached the Sweet 16 in the NCAA Tournament.

Syracuse is coached by Jim Boeheim, one of the best-known figures in college basketball. Boeheim has led Syracuse to 34 NCAA Tournament appearances, including five Final Four appearances and three appearances in the national title game. Syracuse, led by Carmelo Anthony, won the 2003 national title.

Copeland spent last season at Life Center Academy in New Jersey after he transferred from Gettysburg following a sensational junior season. The 6-foot, 6-inch point guard reclassified to the 2022 class, giving him another year of high school eligibility.

His transfer to Life Center Academy and college commitment follow a similar plan that led a former basketball star from his hometown to the sport's highest level. NBA guard Dion Waiters (originally from Philadelphia, like Copeland) played at the New Jersey prep school before he starred at Syracuse and was the No. 4 pick in the 2012 NBA draft.
... 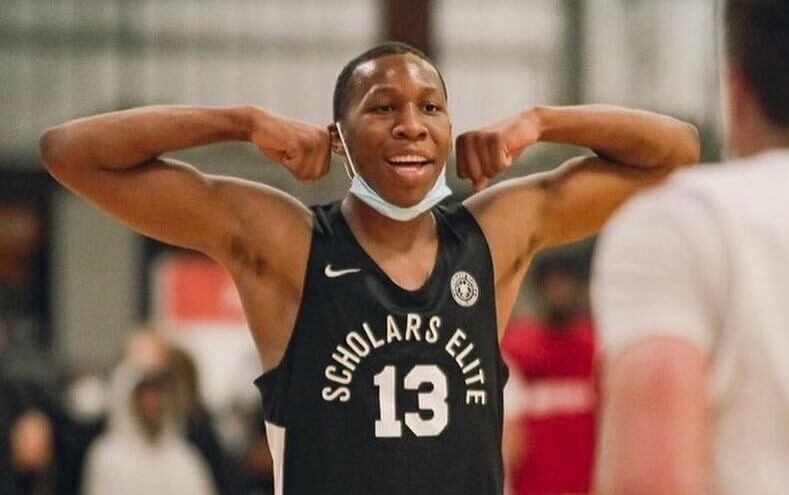 Syracuse lands its point guard of the future in Quadir Copeland (theathletic.com; $; Gutierrez)

Quadir Copeland’s idea of a perfect afternoon doubles as the way he spends most days he’s not seated at a desk, studying in school. He rises shortly after the sun, eager to embark on a variety of workouts from around 7 a.m. until lunch sometime around 1 p.m. He follows up his long mornings with foul shooting or a game of pickup in a park near his southwest Philadelphia home, often until the sun sets in the evening. Copeland likes it this way, remaining engulfed in the craft of self-improvement, awash in the satisfaction of a full day doing what he loves most. The feeling of the ball in his hands, then the ball falling through the net, brings him a sense of comfort he doesn’t find anywhere else.

Syracuse picked up a big commitment on Tuesday when class of 2022 point guard Quadir Copeland pledged Orange. AllSyracuse.com caught up with him to find out why he viewed Syracuse as the right choice.

"Just the best fit in my eyes," Copeland said. "To take my game and just really be myself. Coach Boeheim, Hall of Fame coach. Coach G-Mac, that's my guy. He's really going to be able to help me with my weaknesses. To play with a shooting guard like Justin Taylor and a guy like Kamari (Lands), that's a really nice team coming in, in 22."

When Copeland told the Syracuse coaches he was joining the program, he says he got quite the reaction.

"They were all excited," Copeland said. "If you watch the video, you can tell in the end, they were all really excited."

In the video below, you can see Copeland telling both Jim Boeheim and Gerry McNamara about his decision. Speaking with Boeheim is at the 2:18 mark while McNamara is at 2:44.
...

Some quick takes on another big score for Syracuse basketball and the most important thing Dino Babers will say before the start of the 2021 football season after we tip the cap one more time to the World Series champion Onondaga Babe Ruth baseball squad.

Syracuse men’s basketball is locking down a path to have the highest-rated recruiting class under coach Jim Boeheim since joining the ACC in 2013.

Quadir Copeland, a 6-foot-6 point guard and highly-recruited prospect in the Class of 2022, verbally committed to play college basketball at Syracuse on Tuesday.

Copeland joins joins Kamari Lands, a 6-8 forward from Indianapolis, who’s ranked No. 35 in the class; and Justin Taylor, a 6-6 wing who attends St. Anne’s-Belfield in Charlottesville, Va. and is ranked No. 62.
...

Copeland joins four-stars Kamari Lands and Justin Taylor in an already star-studded 2022 class for Jim Boeheim and company. SU’s three commits triples the amount it was able to land in 2021 (Benny Williams), with over a year left to recruit.

Syracuse offered the 6-foot-6 combo guard, and made him one of its top priorities, in November of 2020. He subsequently visited Central New York the following summer, on June 22, describing the official as an “amazing trip”.

All of this took place as Copeland transferred from Life Center Academy in New Jersey to IMG Academy in Florida, where incoming SU freshman Williams attended. A fact that might seem irrelevant, but is actually valuable, as the amount of high-level competition will undoubtedly rise.
... 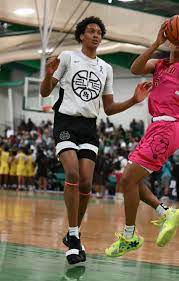 Syracuse basketball is reportedly showing interest in a tremendous big man within the 2023 class who has seen his stock absolutely soar of late, according to media reports and comments from national recruiting analysts.

Four-star Isaiah Miranda is a 7-foot-1 prospect who it appears can suit up at either power forward or center. That kind of agility and versatility would certainly mesh well with the Orange’s 2-3 zone, and his growing skill-set would absolutely be welcomed by ‘Cuse fans.

Like other 2023 high-school players, Miranda’s recruiting process has recently taken off, particularly as college coaches could begin making direct contact with prospects in this cycle starting in mid-June.

By the way, Miranda recently tweeted out that he is transferring from The Phelps School in Malvern, Pa., to the Springfield Commonwealth Academy in Springfield, Mass. On the AAU circuit, Miranda runs with Rhode Island Elite.

I am excited to announce my commitment to Springfield Commonwealth Academy this fall. I am also deeply appreciative of the Phelps School for developing me into the student and athlete I am today. Thank you for all of the time and support the coaches, staff and faculty put into me pic.twitter.com/HTzjQ42V2T
— Isaiah Miranda (@IsaiahSaMiranda) August 2, 2021
Expand... 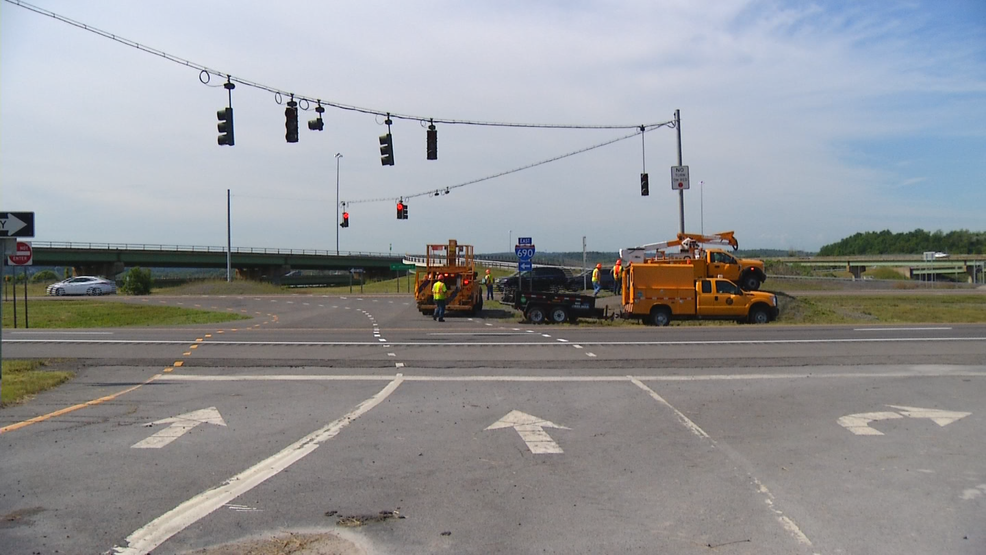 For years, it was as sure a sign as any that the New York State Fair was on its way: The arrival of the traffic signal across Interstate 690.

Not this year. The 2021 fair will be the first without the red light across the highway.

The state has overhauled numerous aspects of the fairgrounds in recent years, including the busy Orange parking lot. It has been expanded and paved and a new ramp will now take traffic directly from the lot to eastbound 690.

That ramp eliminates the need for the unusual signal across the highway, which crews erected temporarily every year. Officials have said it was one of the only regularly scheduled traffic controls across an interstate in the country.

The light stopped eastbound traffic on 690 to let fairgoers out.

The new ramp completes a $38 million project to improve the Orange lot, which also serves as the main parking area for the St. Joseph’s Health Amphitheater at Lakeview. The project added thousands of new spaces, in addition to paving.

It also added another new on-ramp from the lot to westbound 690.

Fair leaders are planning for 100% capacity indoors and outdoors. The 2020 fair was canceled due to the Covid-19 pandemic, but Gov. Andrew Cuomo announced in June the event would return in 2021.

There have been a few bumps. Some big-name vendors have pulled out, but fair officials say plenty of regulars are fully committed, including some who believe this could be one of the best fairs ever.

Outstanding pick up; exciting addition to our class! 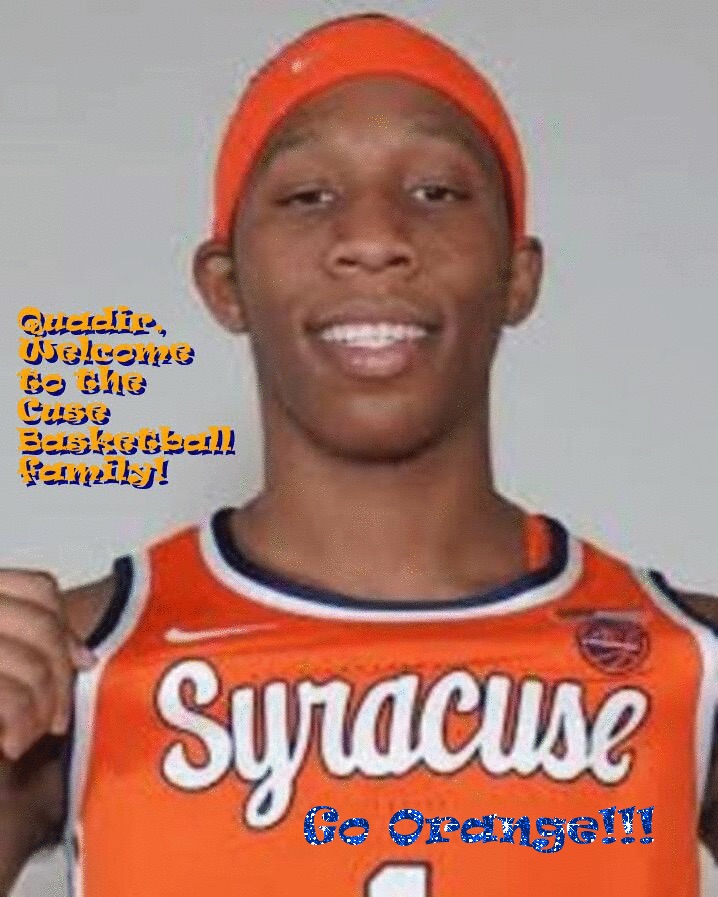