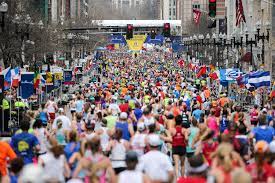 The Boston Marathon, the oldest annual marathon in the world, takes place today. It was first held on April 19, 1897, when fifteen runners participated. It was inspired by the first Olympic marathon, which was held the previous year in Athens, Greece. John Graham, a Boston Athletic Association (B.A.A.) member and team manager of the first Olympic team, created the marathon. At first, it was a local event, but runners now come from all over the world.

The distance of the original Olympic marathon in 1896 was 24.8 miles, which was based on the distance that Pheidippides was said to have run between Marathon and Athens when he delivered the news that Greece had defeated the Persian army. At the 1908 Olympic games in London, the distance was set to 26 miles, 385 yards. The race began outside of the Windsor Castle so that the royal family could view the start. It was then 26 miles to the Olympic stadium. An extra 385 yards were added so that the runners could finish around a track, and so that the race would finish in front of the king and queen's royal box. Olympic marathon distances varied following this until they were permanently put at the 1908 length starting in 1924. Similarly, the Boston Marathon length had varied over the years but was also made to match the Olympic distance in 1924.

Maliq Brown, a 6-foot-9 power forward in the 2022 recruiting class, will narrow his list of schools to five on Monday. Brown will reveal his top five on the Twitter feed of 336Edits.

Brown, a senior at Blue Ridge (Virginia) High School, visited the Syracuse campus a week ago.

Brown is a long, rangy forward with a 7-foot wingspan. He was listed at 210 pounds as a junior last year at Blue Ridge School. He is an elite defensive player and rebounder.

Brown is a former AAU teammate of Justin Taylor, a 6-6 guard from Charlottesville, Virginia, who committed to Syracuse in June. The two played for Team Loaded a year ago. Taylor is currently enrolled at IMG Academy in Bradenton, Florida.

Syracuse also has a commitment from Quadir Copeland, a 6-6 guard in the 2022 class. Copeland is a native of Gettysburg, Pennsylvania, but he is also spending his senior year at IMG Academy.

Syracuse has a third verbal commitment from Peter Carey, a 6-11 senior center from Northfield Mount Hermon School in Gill, Massachusetts.

In addition to Brown, the Syracuse coaches are waiting for decisions from JJ Starling, a 6-3 guard from Baldwinsville who currently attends La Lumiere School in La Porte, Indiana, and Chris Bunch, a 6-7 forward who attends Wasatch (Utah) Academy. Bunch has said he will make his announcement on Oct. 31.
...

Syracuse basketball 2022 high-priority target Chris Bunch has three finalists and is expected to announce his collegiate destination on Halloween. So he’s got to choose the Orange, right?

All kidding aside, we’ll soon know whether the four-star wing is headed to the ‘Cuse, Mike Hopkins-led Washington or Rutgers. All three are strong contenders, but my gut says that the Orange might have the best shot at landing Bunch, who is a top-60 prospect across the country in his class, according to 247Sports.

To date, I haven’t seen predictions from national analysts and recruiting insiders on the 247Sports Web site and https://n./content/prospects/2022/chris-bunch-256079, so that’s something to monitor.

And as I always say, these projections have to get taken with a grain of salt. Plus, these recruiting processes can change rapidly and sometimes unpredictably. Still, I have a few thoughts on why I think that Bunch will select the ‘Cuse.

First and foremost, I think it’s at least worth pointing out that the 6-foot-7 Bunch took two official visits to the Hill, whereas he made one trip each to Washington and Rutgers.

In a recent interview that he conducted with 247Sports national analyst Brandon Jenkins, Bunch said in part, “One of the more important things for me is winning.”

Now, Rutgers is a program on the rise in the rugged Big Ten Conference. Washington was bad a season ago, but Hopkins has had some success with the Huskies, and he’s a tremendous recruiter.

However, if we’re talking about the most accomplished program of the three, the Orange has to be at the top of the list. Even amid some regular-season struggles since joining the Atlantic Coast Conference in 2013-14, the ‘Cuse has still advanced to a Final Four and a couple of Sweet 16s.
...

Syracuse basketball 2023 five-star target Justin Edwards recently discussed some of the main teams prominent in his recruitment during an interview with a national analyst.

Did the Orange get a mention? Unfortunately, not. That being said, the junior at the Imhotep Institute Charter High School in Philadelphia could have a long way to go in his recruiting process, so we’re not shutting the door on the ‘Cuse at this juncture.

By the way, Syracuse basketball offered this stellar small forward over the summer. The 6-foot-7 Edwards, ranked in the top-10 across the country in his cycle according to some recruiting services, has a ton of high-major offers.

We’ve noted in recent columns that Edwards, at least for the time being, hears the most from former Big East Conference rival Connecticut.

According to a recent article from basketball recruiting director Rob Cassidy, some of the key players in Edwards’ recruitment are UConn, Penn State, Maryland and Kentucky.

The Wildcats are certainly a squad to watch, given that team’s prowess on the recruiting trail. “Now Kentucky is coming heavy,” Edwards said to Cassidy.

In fact, we published a piece not too long ago, detailing how Kentucky has landed a prediction for Edwards from a recruiting insider on .
...

Syracuse Basketball: Here’s the path to score 20-plus wins this season (itlh; Adler)

Syracuse basketball did what Syracuse basketball does during this past spring’s NCAA Tournament, as the double-digit seeded Orange knocked off a few teams in route to a Sweet 16 appearance, an 18-10 overall record and a No. 25 ranking in the final Coaches poll.

Now the ‘Cuse is preparing for the upcoming 2021-22 campaign, and the team recently learned its full schedule after Atlantic Coast Conference officials unveiled the league’s docket.

As I’ve said a couple of times lately, the Orange has a pretty brutal and exciting non-conference slate, and its ACC calendar is no picnic, either.

At the same time, the sizable amount of strong opponents in 2021-22 presents Syracuse basketball with many opportunities to build a post-season resume that will enable the ‘Cuse to hear its name called on Selection Sunday.

This is my initial projection of how Syracuse basketball will fare in 2021-22.

Okay, I’ve listed below each game for the Orange this season, and how I think the ‘Cuse will do in every encounter. Then I’ll have some further comments after the listing of contests.


Friday, Nov. 26: Auburn/UConn/Loyola Chicago/Michigan State at 2021 Battle 4 Atlantis
Win (over one of those four possibilities) 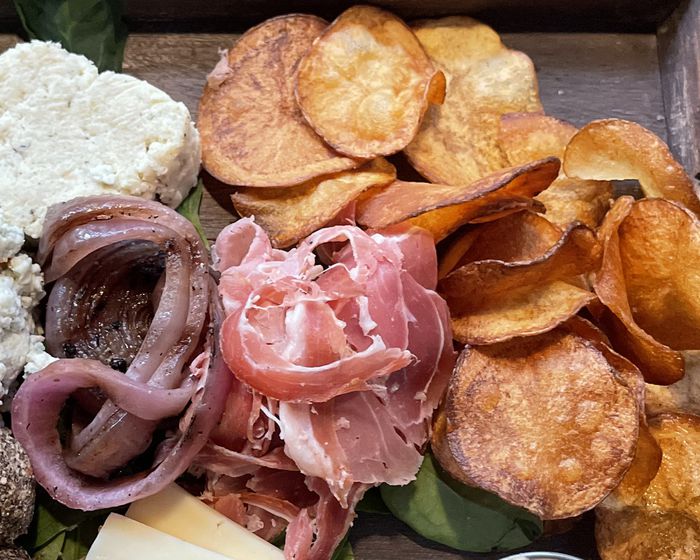 Prosciutto is nested at the center of the Traditional Board, with chicken and sage mousseline, cheese, grilled onions and chips at Board & Bar Charcuterie, Syracuse, N.Y. (Jared Paventi | jaredpaventi@gmail.com)

Syracuse’s Board & Bar Charcuterie: Not your average meat and cheese board (Dining Out Review) (PS; Paventi)

Board & Bar Charceuterie’s Neapolitan board is not the traditional array of cured meat and cheese. In fact, there wasn’t a speck of speck or salumi found on the large wooden block in the middle of our table.

Meatballs, Italian sausage and breaded chicken fritters were served with fresh mozzarella, ricotta and parmesan cheese with a copper-clad mini-skillet of marinara sauce. Grilled red onions and roasted plum tomatoes adorned the board, as did a mound of pesto hummus.

It was visually striking with regard to color and texture and even more enjoyable to eat. The rigid, somewhat crunchy exterior of the meatballs showed evidence of frying, not baking or cooking in sauce, a pleasant departure from what we have come to expect from restaurant meatballs.

Large Italian sausage links were advertised as spicy, but were really just assertively spiced with flavors of fennel and other herbs. We found the chunky marinara to be bold and full of roasted tomato flavor with hints of garlic and a dash of crushed red pepper.

Together with the house focaccia, we had the tools to assemble bite-sized chicken parmesan, meatball and sausage sandwiches. Housemade potato chips created the ideal carrier for the earthy, fresh flavor of the pesto hummus.
... 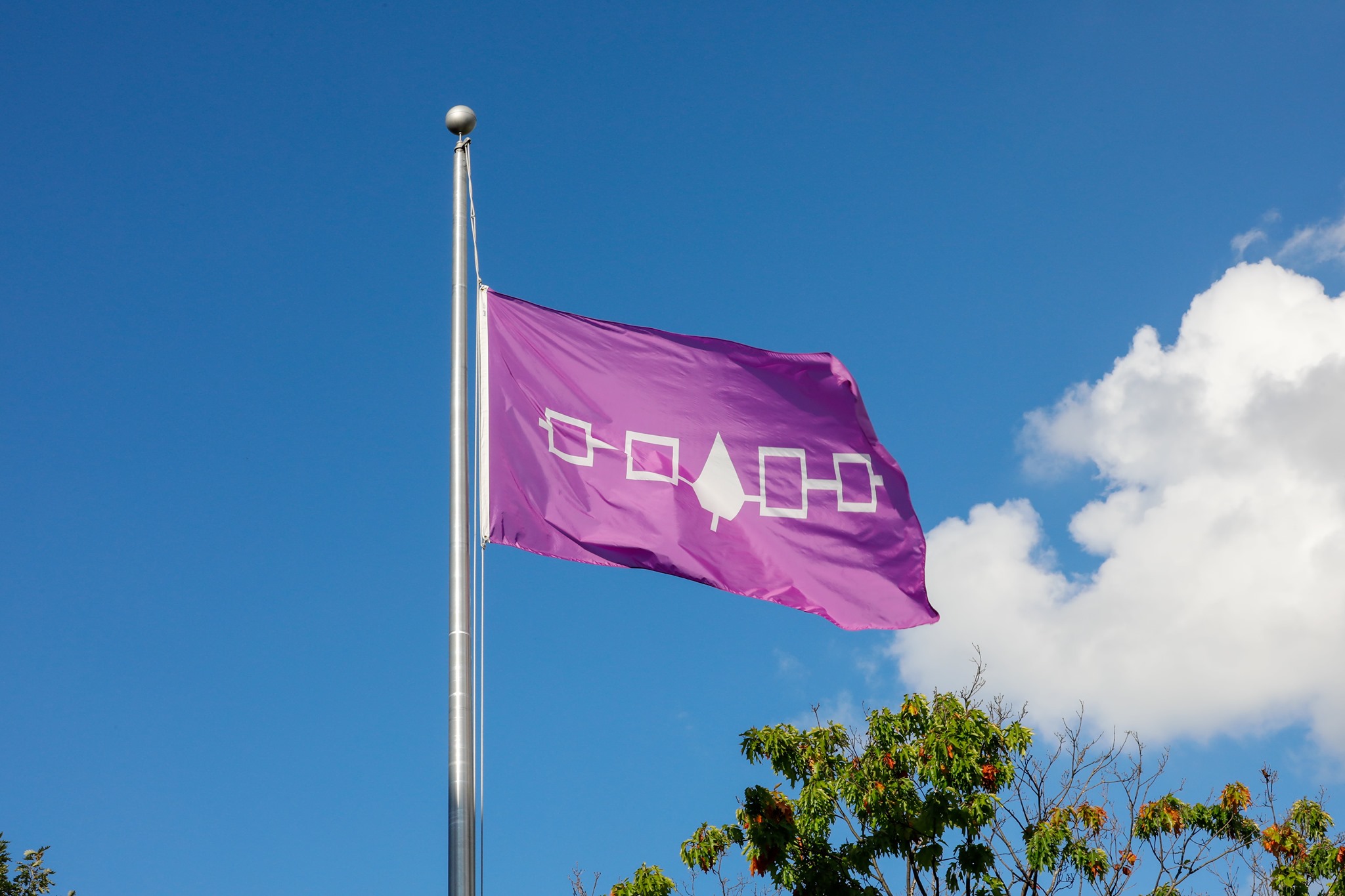