Today we celebrate and indulge in chocolate, the sweet treat that is made from the cocoa bean, which comes from the Theobroma cacao tree. The word "chocolate" itself comes from the Spanish, and it stems from the Aztec word xocolatl, which means "bitter water." The Aztecs pounded cacao beans and drank them without adding any sugar, and they thought that the beans came from the gods. Indeed, Theobroma means "food of the gods." Cocoa beans are about 50% "cocoa butter" and 50% "chocolate liquor." Hernando Cortés brought cocoa beans back to Spain, and a chocolate drink that included sugar became popular there right away. This seems to contradict the accounts that say chocolate wasn't introduced in Europe until 1550. The word "chocolate" first appeared in print, in England, in 1604.

During the eighteenth century, a chocolate drink became fashionable throughout Europe, and it first became manufactured in what would become the United States in 1765. The first chocolate factory opened in the United States in 1780, but hard chocolate candy was not yet made until the dawn of the nineteenth century. Hardened chocolate candy bars first started being sold on a large scale by the Cadbury Company of England in 1842, and "chocolate creams"—candies with sugar-cream centers—were first eaten by Americans in the 1860s. 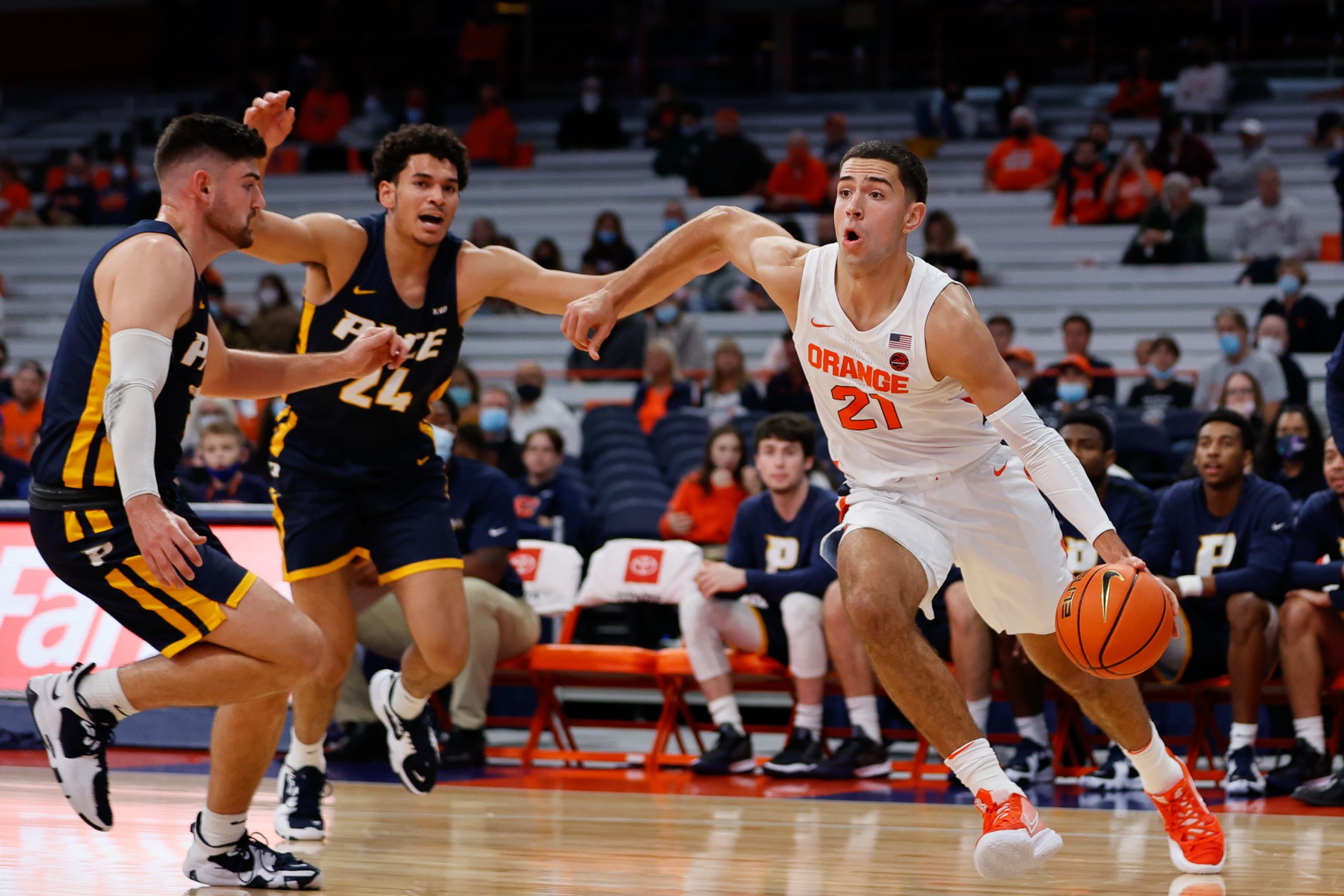 Syracuse's Cole Swider (21) drives to the paint during an exhibition game against Pace University on October 27, 2021.

For the first time since February 2020, fans watched Syracuse basketball at the Dome in person. Fans created anticipation in the air as the Orange took the court, the first game which featured brothers Jimmy and Buddy Boeheim playing together for the Orange.

The first half was a solid return for SU. Junior guard Joe Girard III scored the game’s first points and ignited a 9-4 run in the first five minutes. Girard controlled the Orange offense and accounted for seven points and six assists on the night.

The Setters kept the game close with a 9-9 tie game nearly six minutes into the night. Not long after, senior guard Buddy Boeheim scored the first of his three three-pointers to wake up the Orange. The shot sparked an SU offensive burst and led to a 20-6 run to make the score 29-15. 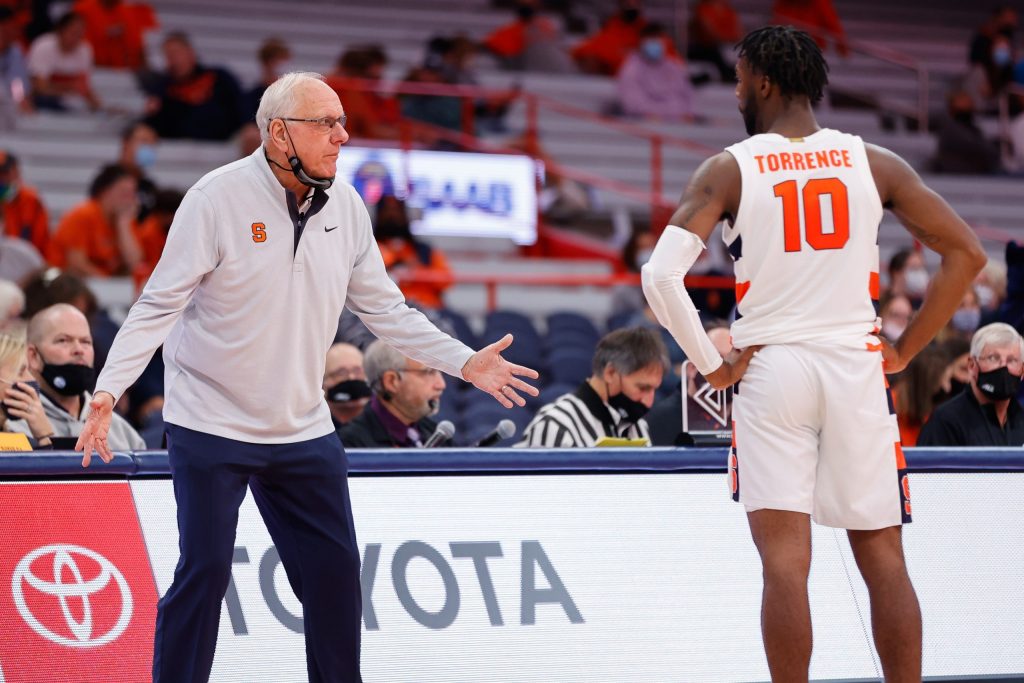 Junior center Jesse Edwards filled in for graduate center Bourama Sidibe, who is expected to miss the next four weeks recovering from a knee injury. Edwards did it all on both sides of the court, accounting for 12 points and leading the Orange defense with four blocks.

Syracuse entered the second half with a comfortable 43-26 lead and continued where they left off in the first. After the first five minutes, senior forward Cole Swider led a run consisting of 15 unanswered points. Swider had the hot hand, scoring a game-high 21 points and shooting 5-7 from beyond the arc in his first game since transferring from Villanova.

Freshman forward Benny Williams chipped in with seven points and nine rebounds. Williams created the highlight of the game, swiftly spinning past his defender, and gliding in the air to find graduate forward Jimmy Boeheim for the layup.
...

Syracuse opened its 2021 exhibition schedule on Wednesday evening, as the Orange cruised past Pace, 79-60. Here are some quick thoughts from the game.
...

Two Syracuse basketball centers who have drastically improved, according to Orange coaches, should get the bulk of minutes in the early part of the 2021-22 campaign, given that graduate student Bourama Sidibe is unfortunately injured yet again.

Last year, as a senior, Sidibe missed virtually the entire term. He elected to return to the Hill for a fifth stanza of eligibility, but word broke on Wednesday that he will miss some time to start 2021-22.

According to a tweet from national analyst and journalist Jeff Goodman, “Sidibe suffered a knee injury and will be out approximately a month,” with the tweet adding that “Sidibe missed last season with injury to his other knee.”

First and foremost, my heart goes out to Bourama. He’s a really nice young man, and I sincerely hope that he’s back at full strength soon. It’s proven a rough two seasons in a row for him, although I hope he can get going in the near future of his grad-student year.

Junior Jesse Edwards is poised to be the team’s starting center in 2021-22, and he was in head coach Jim Boeheim’s starting rotation when the ‘Cuse hosted Pace in an exhibition contest on Wednesday night.

Edwards has added strength and, in my opinion, is primed for a nice junior term. But he’s not going to play 40 minutes a game, and with Sidibe out for the foreseeable future, that provides sophomore Frank Anselem with an opportunity to show what he can do on the court.

As we noted in a recent column, Boeheim has said that Edwards and Anselem “are light-years away from where they were last year,” according to a tweet from Donna Ditota of Syracuse.com.
...

Let's talk basketball for a moment - specifically, the 2022 NCAA Men's Basketball Tournament. Here are the host cities (those in the ACC footprint highlighted in bold blue)...

You may order your "pre-sale" tickets now - click here for the ncaatickets web page.

Syracuse Basketball: In updated rankings, 5-star target is No. 1 in country (itlh; Adler)

Recruiting service 247Sports recently updated and expanded its national rankings for the 2023 class, and a Syracuse basketball five-star target checks in at No. 1 around the country.

Five-star point guard D.J. Wagner, who received a scholarship offer from the Orange coaching staff in August, is the top-ranked junior, according to 247Sports.

The 6-foot-3 Wagner, by extension, is also the No. 1 prospect in the 2023 cycle according to numerous other recruiting services, including ESPN and https://n./content/prospects/2023/dajuan-wagner-jr-256424, as well as the industry-generated 247Sports Composite.

That being said, I have read some comments of late from several national analysts and recruiting insiders that suggest other top-flight 2023 players could be in a position to significantly contend for this cycle’s No. 1 rating as well.

Orange coaches offered Wagner at the team’s annual Elite Camp over the summer. He attends Camden High School in Camden, N.J., which some experts view as the nation’s No. 1 public high-school team heading into the upcoming campaign.

Besides the ‘Cuse, Wagner holds offers from squads such as Memphis, Kentucky, Villanova and Temple. Auburn is reportedly recruiting him, and Wagner has interest from Duke, Gonzaga, Michigan, Arkansas and Penn State, among others, according to recruiting services and media reports.

He recently took official visits to recruiting juggernauts Kentucky and Memphis, and it wouldn’t surprise me at all if those two schools end up as the front-runners to land Wagner.

Wagner is the son of Dajuan Wagner, who suited up for Kentucky head coach John Calipari at Memphis for one season prior to getting selected at No. 6 overall in the first round of the 2002 NBA Draft.
... Heuga’s Alpine in Tully: A room with a view (Dining Out Review) (PS; $; Paventi)

Stringy and tender, the braised beef ($21) at Heuga’s Alpine was exactly what I would hope from a restaurant at the bottom of a ski hill. Cooked low and slow in tomatoes and beef stock, it evoked the idea of pot roast but without the pesky vegetables and need for a knife.

No, this was purely about meat. There was complexity, as herbs and aromatics penetrated the beef to complement its fat-enriched flavor from cooking. Serving it over a bed of soft polenta was an astute choice, as the mushy cornmeal absorbed some of the cooking liquid while offering a modern alternative to a potato. Not that there is anything wrong with potatoes, but using them here would have been easy. The delicate, fussiness of polenta was a welcomed option.

Heuga’s Alpine, named after Olympic skier Jimmy Heuga, debuted in June, opening in the former ski lodge at the base of Song Mountain in Tully. Our table faced out at the downhill trails, with the outdoor patio in our range of view. It’s a shame that it rained on our Saturday evening visit, as we would have absolutely moved outside by the firepit after dinner for a couple of beers.

Under the leadership of general manager Tyler Dunlap and chef Tim Dickerson, it has pivoted away from feeding hungry skiers to a modern American menu bent on year-round service.

It starts with the thin and crispy flatbreads. The Meat and Veggie versions seemed unoriginal, but the Goat ($11) jumped off the page. It’s all about the marriage of caramelized onion and goat cheese, as the sweet, soft onions are paired with funky, earthy goat cheese perfectly. A tart cherry glaze, reduced to a syrupy consistency, added an acidic balance to the plate.
...