Welcome to Go for Broke Day!

Go For Broke Day is a day for taking a chance, giving it all you have, and leaving nothing undone. It may be a day to put all your money down when gambling, to risk everything for a new project or business endeavor, to start a new job, or take a chance on a new relationship.

The motto of the American 442nd infantry division during World War II was "Go For Broke." This division was made up of Nisei, Americans of second-generation Japanese descent. The soldiers fought in Europe and became the most decorated regiment in American history. Of the close to 14,000 that served, 9,486 received Purple Hearts. Twenty-one members received the Medal of Honor. The first to do so was Sadao Munemori, who died on April 5, 1945, after sacrificing his life to save fellow soldiers near Seravezza, Italy. There is some indication that Go For Broke Day is celebrated on April 5 because of his valor.

Syracuse forward Cole Swider announced on Sunday that he is foregoing his final year of eligibility in order to enter the NBA Draft and pursue his professional aspirations. All Syracuse caught up with Swider to discuss his decision, reaction from the Orange coaches, his time with the program and more.

Q: Why did you decide to turn pro?

Swider: "Talking to my parents and talking to coach Boeheim, the age thing was definitely one of the biggest factors of me deciding to go to the NBA, choosing to go pro and sign with an agent. I had a pretty good year this year, obviously the wins and losses weren't what we wanted, but I think being 6-9, averaging 14 (points) and seven (rebounds), shooting 40% from three, I've shown what I can do. I put myself into position to be looked at by the NBA. Being able to graduate this year and kind of put my name in the draft, I got pretty good feedback. So hearing those things, kind of led to my decision."

Q: What was the reaction from the Syracuse coaches when you told them about your decision?

Swider: "They were all on board. I kept constant communication with all of the coaches the entire time I was going back and forth. Coach Boeheim thought at the beginning that I wasn't going to come back at all. So, to have that constant communication was great. Coach Boeheim was really influential to me. He told me if I come back it's more about what I want to do in college, it wouldn't be for my pro aspirations. He was great in showing me all options. Same with G-Mac and Red and Allen Griffin as well."

Q: How close was the decision? How strong of a consideration was there about potentially coming back?

Swider: "It was a very strong consideration. This year at Syracuse has meant everything to me and my family. It's been a wonderful year. The fans have been unbelievable even though we didn't have the season we wanted to have. Playing for coach Boeheim and G-Mac and all the coaches, playing in the Dome, was a dream come true for me. The urge to come back and win and make the Tournament and do all those things was a very high possibility for me. But after hearing the feedback I heard, it made it hard not to sign with an agent and going pro."
... After averaging 14 points per game last season in an expanded starting role, the once-Villanova transfer Cole Swider has decided to forgo his final year of eligibility to prepare for the upcoming NBA Draft.

All Glory to God. Words can’t describe how much this year meant to my family and I. I will be Orange for Life. Thank you Syracuse. pic.twitter.com/wivODyLnHH
— Cole Swider (@coleswider21) April 3, 2022
Expand...

This should elicit a wide variety of responses from those in the Salt City. Swider kicked off the season in struggling form, looking like the non-factor player Jay Wright molded him into over three years as part of the Wildcats. For the murmurs about three-point shooting ability, the senior connected on three of his first 22 attempts from distance, all in games against Lafayette, Drexel, Colgate and VCU. So the majority of hope SU fans had for Swider’s length and potential from outside simmered early.

That was until the Rhode Island native scored in double figures in 11 of the next 13 games, further proving that his ceiling had barely been scratched and the potential was there. But that sentiment was none more evident than toward the end of the regular season. Swider erupted in the final 13 games of SU’s long-winded 2022, averaging nearly 19 points per contest, which included 18-point outings against Wake Forest, Boston College and Georgia Tech, and above that point total four more times to finish out the year.

No performance was as gargantuan as his career-high 36 points in Chapel Hill, in which the senior almost led the ‘Cuse to an upset victory over the now-national championship contending North Carolina Tar Heels. Many forget that Swider also dropped 28 points on 60% shooting in SU’s opening round ACC tournament win over Florida State just over a week later.
... 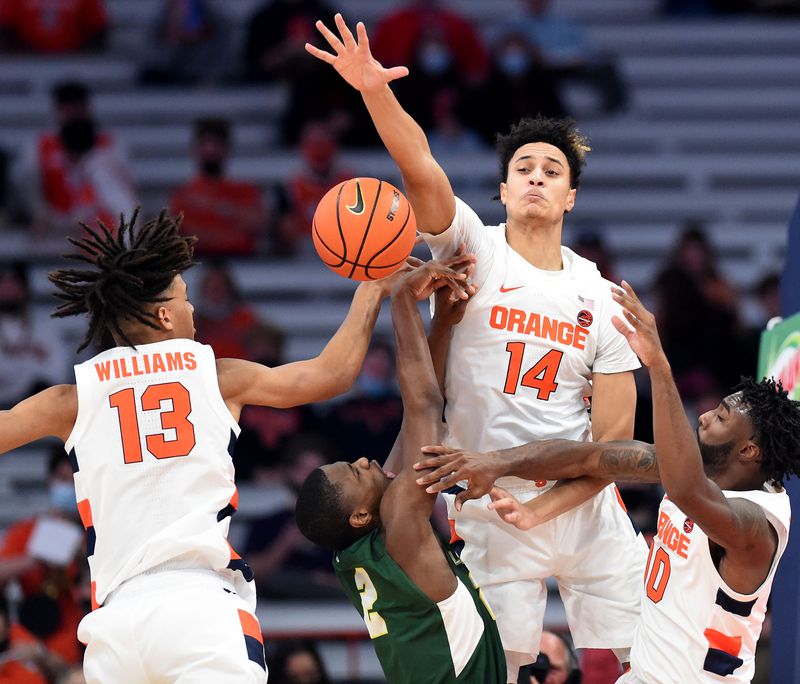 The Villanova transfer, who played one season for the Orange, will not use his extra year of Covid eligibility to play a final season in Syracuse.

All Glory to God. Words can’t describe how much this year meant to my family and I. I will be Orange for Life. Thank you Syracuse. pic.twitter.com/wivODyLnHH
— Cole Swider (@coleswider21) April 3, 2022
Expand...

Swider will graduate from college this year and turns 23 next month. His decision to step away from the college game means Syracuse next season will be without three of its top five scorers, its statistically-best rebounder and one of its best 3-point threats.

Swider made 41% of his 3s last season; no other Orange player was better in that category. Right now, Syracuse will enter 2022-23 with a dearth of experienced scorers: Buddy Boeheim (19.2 ppg), Swider (13.9 ppg) and Jimmy Boeheim (13.7 ppg) have each moved on, leaving Joe Girard (13.8 ppg) and Jesse Edwards (12.0 ppg) as returning starters who will be tasked with carrying a heavier scoring load.

The Orange will need to replace each of its starting forwards, who combined for close to 30 points and 13 rebounds per game last season.

Benny Williams, stuck behind two experienced scorers in Swider and Jimmy Boeheim, will be the lone Syracuse forward with any college basketball experience. Williams averaged 11.5 minutes per game last season. He missed the last three SU games as he recovered from an undisclosed injury sustained in the Feb. 28 game at North Carolina, though Jim Boeheim has said the injury was not serious.
...

Tim Leonard and Tyler Aki bring you everything Orange with the Locked On Syracuse Podcast. They have you covered Monday through Friday with the latest 'Cuse news, analysis, exclusive interviews and more. Subscribe for Syracuse news in your feed daily...

Syracuse Basketball will not have Cole Swider next year. The Villanova transfer has signed with an agent and will put his name in the 2022 NBA Draft. Was the Cole Swider season a success? And then what does this mean for the roster next year for the Syracuse Orange? Tim Leonard projects the Syracuse Basketball starting five and gives his best guess at how Jim Boeheim will distribute minutes to Judah Mintz, Justin Taylor, Maliq Brown, Peter Carey and others. 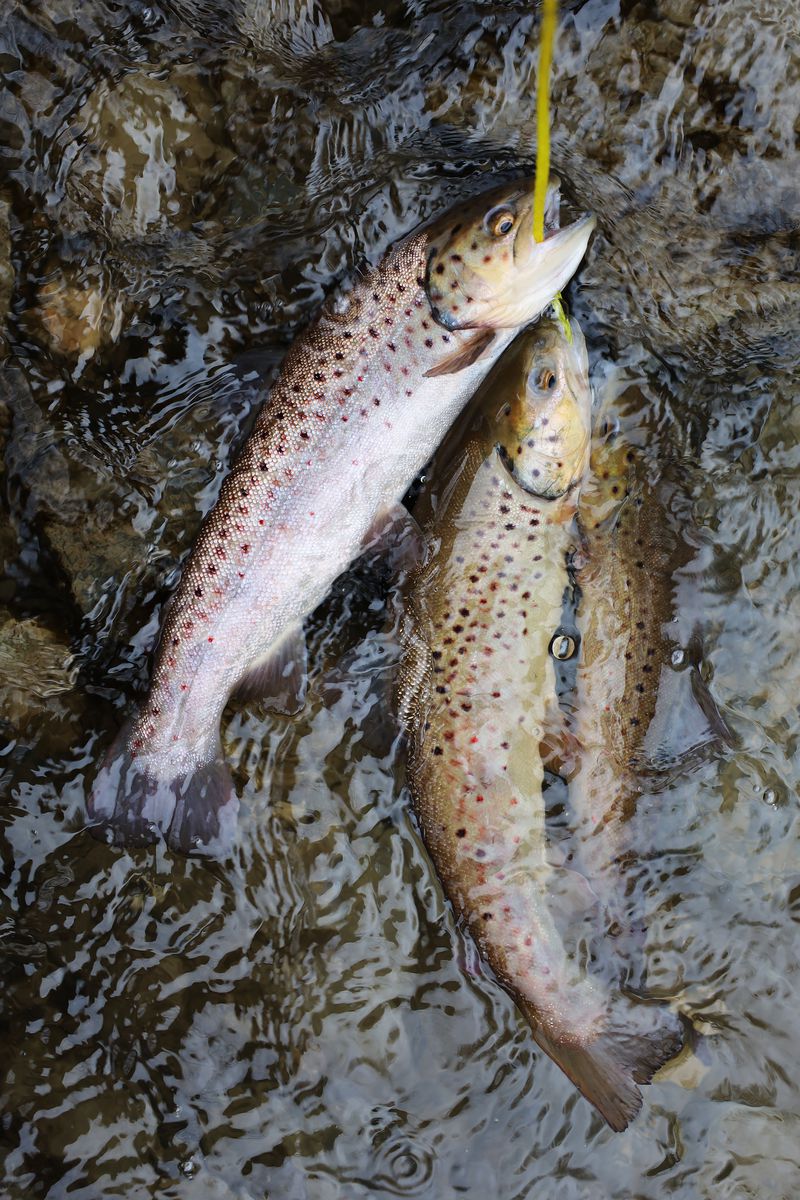 ‘It was like a stampede’: Anglers shrug off heavy water, sleet, snow to haul in tons of trout (28 photos) (PS; Featherstone)

Mother nature threw the kitchen sink at Central New York on Friday. Rain, snow, ice pellets, and whatever you call that fiendish stuff that isn’t quite rain, snow or ice. In other words, a normal opening day of trout season.

But trout anglers are a devoted bunch. Matt O’Brien of Skaneateles caught a 15-inch brown trout on the overgrown banks of Limestone Creek near Route 80 in Fabius that evoked fond memories of trout fishing with his father, who passed away 14 years ago, he said.

“Opening day is like a religious holiday,” O’Brien said. “I try to get out every year at least once.”

Creeks and streams across Upstate were running high, fast, and cloudy due to run-off. But despite less than ideal conditions, many anglers limited out and went home early. Around 10 a.m., Matt Vito of Liverpool stood on a bend of Ninemile Creek just outside the village of Camillus. The creek bank under his boots had been churned into a muddy sludge by previous anglers.
...