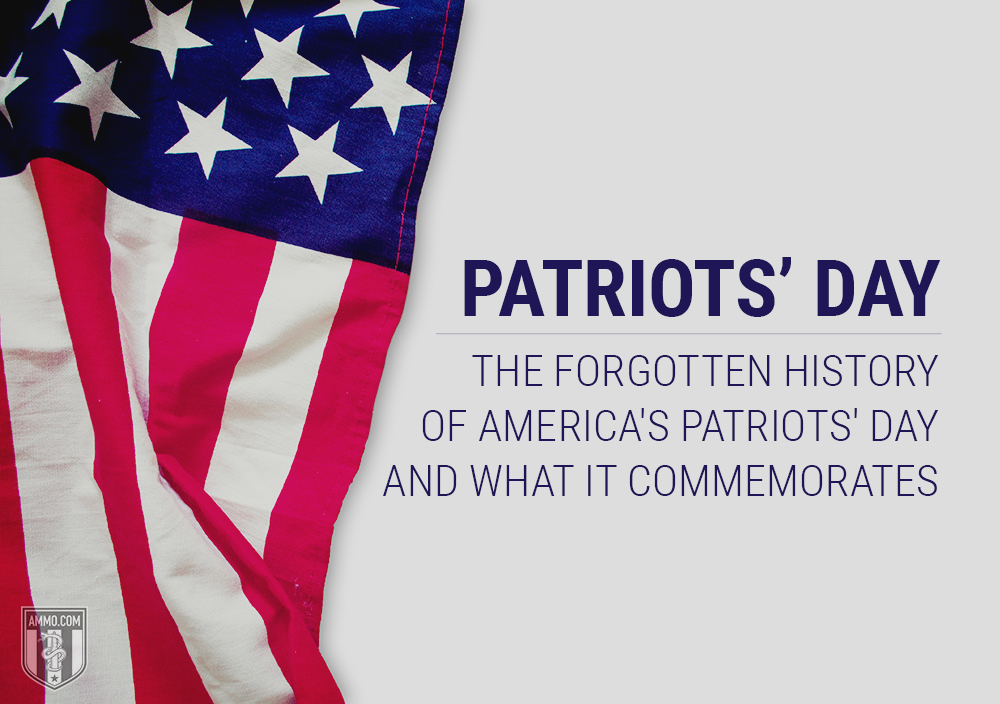 Patriots' Day is a holiday commemorating the battles of Lexington and Concord, which took place on April 19, 1775. The shots fired at these two cities on the outskirts of Boston were the first shots of the American Revolution. Following the war, Lexington Day and Concord Day began being celebrated in their respective cities. The cities later petitioned Massachusetts Governor Frederic Greenhalge to create a state commemoration. He created Patriots' Day, which replaced Fast Day. It was first celebrated on April 19, 1894. The new holiday also originally commemorated the anniversary of the Baltimore riot of 1861, where some of the first bloodshed of the Civil War took place, and four members of the Massachusetts militia died. In 1938, the Massachusetts legislature passed a bill making the battles of Lexington and Concord the sole focus of the day.

Until 1969, the holiday was celebrated on the actual anniversary of the battles, but it since has been observed on the third Monday of April in most states that officially commemorate it. As of 2018, it is a state holiday in Maine and Massachusetts. Schools in Wisconsin observe it on April 19 (if it's a weekday) by having students learn about the battles and their importance to American history. Those in Florida are encouraged to celebrate the day, although it isn't an official holiday there. Connecticut began officially observing the day in 2018.

Florida State transfer big Quincy Ballard committed to Wichita State on Saturday over Syracuse. Ballard was being recruited to replace Frank Anselem, who is in the transfer portal, as the primary backup to starting center Jesse Edwards. How does the Orange respond? Here are the options moving forward.

Option 1: Find Someone in the Portal

While it did not work out with Quincy Ballard, that does not mean it necessarily would not with someone else. Syracuse can continue to monitor portal options for someone who is willing to come in and backup Jesse Edwards for a season with the potential to compete for a starting spot the following year. This may require patience, however. That pitch is very difficult within the portal as most that enter it do so expecting an opportunity with significant playing time immediately. Playing time is the biggest reason for entering the portal in the first place. However, with the abundance of portal entrants, there can be a bunch of players that are left without a home as summer draws near. Perhaps at that point Syracuse can find a player who may be more willing to accept such a role if other opportunities do not present themselves.

With the difficult pitch of convincing a transfer, who is likely leaving to get more playing time, to accept a small amount of playing time immediately, an option for the Orange is to stick with what they have. That would mean John Bol Ajak and Peter Carey as backups, or potentially a forward such as Maliq Brown to slide over if needed. Carey has not played this season due to injury, and we do not know how well that will be recovered by the time he arrives. Nor how ready he will be right away. Bol Ajak is a 6-10, 220-pounder who is entering his fourth season with the program. Bol Ajak has appeared in 22 games over the last two seasons, averaging 5.1 minutes, 0.3 points and 1.2 rebounds per game. Jim Boeheim noted multiple times last week that Bol Ajak was performing well in practice. Perhaps with an offseason of hard work that could translate to game performance with a more consistent role.

With the transfer portal, the junior college ranks often get overlooked. That can lead to players who would otherwise go to a high major program falling to a mid-major or lower. Perhaps Syracuse could find a junior college big who is willing to accept a reserve role for a year. Beyond that, the international route has helped the Orange in the past and maybe could be valuable once again. Syracuse has added Marek Dolezaj late in the recruiting cycle that way, and signed Jesse Edwards during the late period as well. An international big may be ready and willing to take on a reserve role in year one with the potential to earn a starting spot after that.
...

Where should Syracuse head after missing on Quincy Ballard? - The Juice Online (the juice; Cheng)

Syracuse’s 2022-23 roster remains in flux, with Florida State transfer Quincy Ballard spurning the Orange for the second time in his college career. Ballard, who had SU in his final two teams after he entered the portal in March, chose Wichita State over the Orange on Saturday.

In 2020, Syracuse was a late entrant for his services before he ultimately picked the Seminoles. But the 7-0, 240 pound center entered the portal following his sophomore season after being a bit player, appearing in 18 games and averaging just 4.7 mpg, 0.9 ppg and 1.2 rpg. He has three years of eligibility remaining. He was a three-star recruit and the 336th ranked player according to the 247 Sports composite.

Syracuse only has one scholarship available, with the addition of six scholarship freshmen in the offseason. Other returners reportedly include Joe Girard, Symir Torrence, Jesse Edwards, and Benny Williams. The only other two scholarship players that are unaccounted for at this point are Chaz Owens and John Bol Ajak, though with each passing day, it becomes more unlikely they would choose to leave Syracuse.

If Syracuse decides to recruit the remaining scholarship, the roster appears to have two needs: (1) A backup center that can provide 5-10 minutes a game depending on if Edwards gets in foul trouble; (2) A veteran wing that can provide experience to a group that has Williams, a sophomore, and three unproven freshmen in Maliq Brown, Justin Taylor and Chris Bunch.

Perhaps Syracuse can kill two birds with one scholarship. Here are some names worth tracking as the Orange mulls its next move:
...

Syracuse basketball recently scored a huge commitment from 2022 four-star guard Judah Mintz, who has signed his national letter of intent to play for the Orange, per a recent tweet from his high-school head coach.

The 6-foot-3 Mintz, who at the end of March picked the ‘Cuse over other finalists DePaul, Wake Forest and N.C. State, is a senior at the powerhouse Oak Hill Academy in Mouth of Wilson, Va.

Per the industry-generated 247Sports Composite and the On3 Consensus, Mintz hovers around the No. 50 overall ranking within the 2022 class, and he’s the highest-rated commit for the Orange in what is now a strong six-member cycle.

To that end, since Mintz committed, the Syracuse basketball 2022 class had moved up to No. 7 across the country when I penned this column, according to .

Let’s examine the national ratings of the Syracuse basketball 2022 cycle.

At the time of this writing, was the most bullish, rankings-wise, regarding the Orange’s 2022 class. On the 247Sports Web site, this ‘Cuse cycle was rated No. 15 nationally and No. 4 in the Atlantic Coast Conference.

Additionally, via the On3 Web site, the Syracuse basketball 2022 class is placed at No. 27 nationwide and No. 5 in the ACC. I’m not a recruiting expert, but only 27th nationally? That seems a bit low, in my humble opinion.

When we last saw Jimmy Boeheim and Cole Swider in action for the Syracuse Orange, they were helping a short-handed squad take the Duke Blue Devils to the wire in the ACC Tournament. Now the two former Orange players are making their case for professional opportunities starting at the Portsmouth Invitational Tournament.

Action got underway last night in this event which is played over four days in Portsmouth Virginia and features only four (or five) year college players. Jimmy Boeheim is a member of the Jani-King team and in last night’s opener they were defeated by the Norfolk Sports Club 79-67. Jimmy got the start and played 28 minutes but struggled with his shot going 2-6 from the field and 0-2 from the foul line. He did have five rebounds and two assists but it wasn’t an ideal start to the weekend.

Looks like Jimmy Boheim had 5 points, 5 rebounds and 2 assists in the Portsmouth Invitational. Wonder how Jimmy Boeheim did? pic.twitter.com/faXekCsJoa
— NunesMagician.com (@NunesMagician) April 14, 2022
Expand...

Jimmy’s team will be back on the court this afternoon at 3:15 as they face K&D Rounds Landscaping. Hopefully they find that missing “E” for today’s box score. Cole Swider will also be in action today as a member of Sales Systems, LTD. They will be playing the Portsmouth Sports Club at 7:00 tonight. You can follow the live stats for games in Portsmouth here.

One note for Syracuse fans is that Virginia Tech’s Keve Aluma also played last night which means he’s unlikely to return to the Hokies. Any player who participates in Portsmouth would have to petition to regain eligibility in college otherwise they would have to sit out two NCAA games for every game played at this event.
...

Justin Edwards, a 2023 five-star forward who holds a Syracuse basketball offer, plans to narrow down the list of schools still in the running for him in the next few weeks, according to a high-school hoops analyst.

The Orange coaching staff offered a scholarship to the 6-foot-7 Edwards last summer. One of the top players in the junior class, Edwards has a range of high-major suitors.


I don’t get the sense that the ‘Cuse is heavily in the mix for Edwards, who recently helped lead the Imhotep Institute Charter High School in Philadelphia to a Class 5A state title in Pennsylvania.

A recent tweet from high-school basketball analyst Alex Karamanos says that five schools “have been the most consistent with Edwards,” and they are Tennessee, Kentucky, Auburn, Kansas and Oregon.

2023 5 Justin Edwards (@Jedwards3_) will be narrowing down his list of schools in the next couple of weeks
The following schools have been the most consistent with Edwards:
– Tennessee
– Kentucky
– Auburn
– Kansas
– Oregon @TeamFinalEYBL @Hidden_Talent_K
— Alex Karamanos (@TheCircuitAlex) April 14, 2022
Expand... 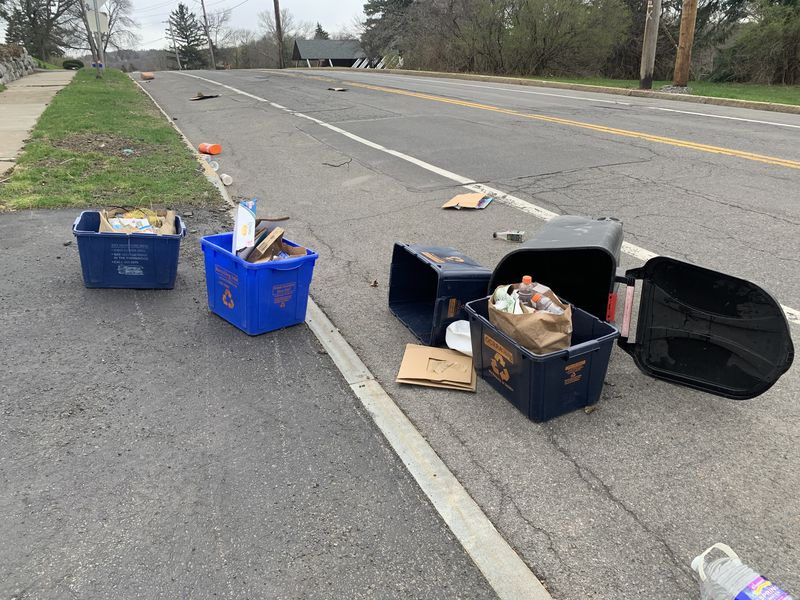 Pity the poor blue bin, the workhorse of Onondaga County’s recycling program for a generation.

About 800,000 of the plastic bins have been filled and emptied, tossed and cracked, snowed and rained on, and crunched by cars and snowplows. Of those, 300,000 are in service.

Now, after at least 32 years as the symbol and substance of the county’s recycling dream, most of the blue bins are their way out. They’ll be replaced by wheeled, lidded plastic cans known in the industry as carts or totes.

A third of county residents have already gone binless. The county’s second-largest town, Manlius, will switch to carts next month.

And the city of Syracuse, which makes up nearly half of the remaining bin users, is planning to switch to carts for both garbage and recycling over the next two years. The move comes as the city is once again running behind on picking up recyclables because of labor shortages and truck mechanical problems.

The change should address Syracuse’s trash problems in the long run. The city is already proposing to replace its aging sanitation fleet with new, $200,000 trucks, which the city says will end recycling pickup delays. At the same time, that automation should cut down on worker injuries, a common issue among trash collectors.

To start, Mayor Ben Walsh has proposed buying 10 new trucks this year. But the big switch won’t start until next year for garbage and 2024 for recycling.

Blue bins were first distributed in Onondaga County circa 1990, and they quickly became the symbol and stimulus for recycling.

“The blue bin had a purpose in the very beginning, and I think it served it admirably well,” said Kristen Lawton, recycling and reduction director for the Onondaga County Resource Recovery Agency, which has overseen the county’s recycling efforts since 1992. “And now we see that there’s a new path to follow that’s better for the environment.”
...