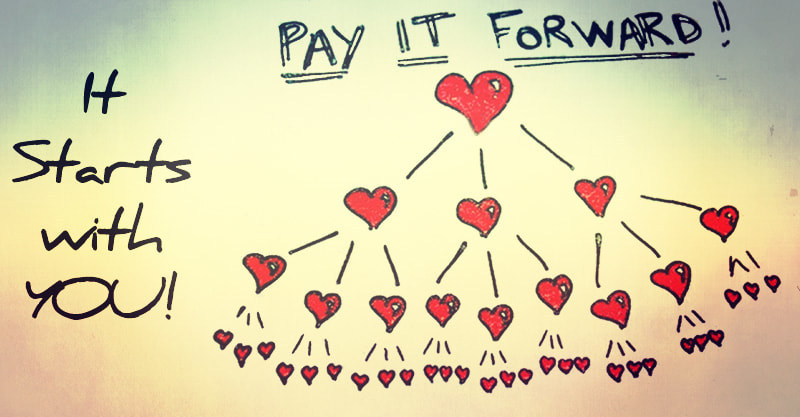 The concept of "pay it forward" is nothing new. The phrase may first have appeared in print in 1916, in the book In the Garden of Delight, although the concept goes back much further. Since 2007, there has been a yearly event devoted to it. International Pay it Forward Day is a "global initiative that exists to make a difference by creating a huge ripple of kindness felt across the world." Each year, people in over 80 countries participate by performing over 10 million acts of kindness. When small acts of kindness and giving are performed by millions of people, there is a potential for the world to be changed for the better, which is the ultimate goal of Pay it Forward Day.

Australia's Blake Beattie created the day, being inspired by Catherine Ryan Hyde's book Pay It Forward, which was published in 1999 and adapted into a feature film the following year. Pay it Forward Day was first held in 2007, and by its second year was being marked by people in five countries. By the fifth year, people in 35 countries were celebrating and there had been seven state proclamations and fifteen city proclamations. By 2017, people in over 80 countries were celebrating each year, and over 100 city and state proclamations had been made in honor of the day. 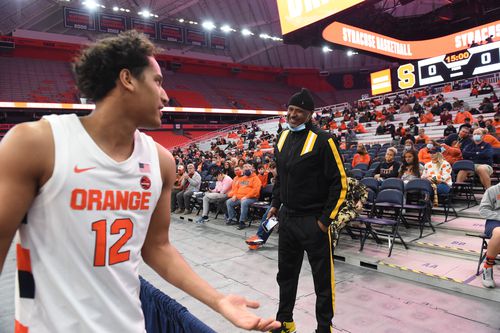 Syracuse Orange forward Chaz Owens (12) runs over to his dad Billy Owens a former Syracuse great after the dunk contest. The Orange played a scrimmage in the Carrier Dome Oct. 22, 2021. Dennis Nett | dnett@syracuse.com

Owens, a 6-foot-5 sophomore, appeared in just eight games during his two seasons with the program. After playing in only two games as a freshman, Owens saw game action six times during the 2021-22 season.

Five-star big man Derik Queen, who hails from Baltimore, likely has a way to go with his recruiting process, although I’m hopeful that Syracuse basketball will emerge as a serious contender for the 6-foot-9 power forward/center.

Queen is a consensus top-10 national player in the 2024 cycle, but since he’s just a sophomore, it may be a while before we get a sense of which schools are prioritizing him, and also which teams he’s honing in on during his recruitment.

In the 2021-22 campaign, as a sophomore for the powerhouse Montverde Academy in Montverde, Fla., Queen didn’t log a ton of minutes, because he was an underclassman and the Eagles featured an absolutely loaded line-up.

In fact, the Montverde Academy captured the 2022 GEICO Nationals in early April at the Suncoast Credit Union Arena in Ft. Myers, Fla., as the Eagles won this prestigious event for the second year in a row.

Still, Queen earned honorable-mention All-America honors in the 2024 class for his play in the 2021-22 stanza, when he averaged 6.2 points and 4.2 rebounds per encounter, according to MaxPreps.

Syracuse basketball has shown interest in five-star Derik Queen for a while now.

Dating back to at least the fall of 2020, I started coming across some media reports suggesting that the ‘Cuse coaching staff was displaying interest in Queen, who starred as a freshman for the Saint Frances Academy in Baltimore before transferring to the Montverde Academy.

Last October, the Orange officially offered a scholarship to Queen. He has at least 10 offers at this juncture, from squads such as Alabama, Illinois, Indiana, Auburn, DePaul, Maryland, Texas, Virginia Tech, Georgetown, LSU, Arizona State and Xavier, per recruiting services.
...

Syracuse basketball 2023 priority recruiting target Elmarko Jackson has earned a lot of praise from numerous national analysts for his performances during two live periods in April on the AAU circuit.

With college coaches, analysts, scouts and others able to watch high-school prospects during these NCAA live periods, the four-star Jackson certainly did seem to raise his stock.

Rated as a top-80 overall player in the 2023 cycle by the majority of primary recruiting services, the 6-foot-4 point guard/shooting guard had a couple of really nice games this past weekend for WE R1 on the Under Armour Association (“UAA”) circuit in Kansas City, Mo.

The Orange coaching staff offered a scholarship to Jackson earlier this month, and he said in an interview with a national analyst a few days ago that the ‘Cuse is among the college squads recruiting him the hardest.

Jackson, who had a strong junior season during the 2021-22 term for the Academy of the New Church in Bryn Athyn, Pa., registered 19 points, three rebounds, two assists and a steal in one UAA contest in Kansas City, per box scores provided on underarmournext.com.
...

Syracuse basketball recruiting target Robert Wright III appears to be one of the hottest prospects in the 2024 class, and his stock is clearly on the rise.

The 6-foot-1 point guard put forth a monster sophomore campaign for his high-school squad in Philadelphia, and this past weekend, during an NCAA live period where college coaches and others could watch prospects in person, Wright competed at an elite level for his AAU group.

For example, according to a tweet from high-school hoops analyst and scout Samad Hines, Wright averaged 18.7 points, 5.7 assists and 5.0 rebounds per contest through four games for the Philadelphia-based Team Final, which is a terrific program on Nike’s EYBL circuit.

Not only that, but per Hines, during this live period in the Indianapolis area, Wright connected on 51 percent from the field and a ridiculous 62 percent from beyond the arc.
...

With a significant roster overhaul happening to the Syracuse basketball program, there’s probably something else that will undergo a major change – the speed the team plays at.

Last year’s group played as a slightly faster pace than the national average, as did the previous year’s squad. That moderate tempo had become a bit of a trend as the team leaned into shooting three-pointers and going for more offensive punch as the Orange defense was not as strong as it had been for most of the previous decade.

While it is far too early to write anything into stone, next year’s roster is mostly devoid of proven offensive firepower. Joe Girard III is just outside the top 50 in all-time scorers at SU with 1,126 points in his career and Jesse Edwards posted in double figures 16 times last season before he went on the shelf due to injury.

After that, the cupboard is pretty bare.

While logging the most playing time in his three collegiate seasons in his first year at SU, Symir Torrence also set a personal high-water mark in single-season scoring… with 77 points. Playing starter’s minutes in the final two games, Torrence tallied 16 of those markers. Benny Williams had 14 points late in the regular season against Duke, suggesting he was finally getting comfortable on the floor, but just 42 points beyond that in his freshman campaign.

At the start of the season, Jon Bol Ajak’s seven career points will rank fifth on the roster, should it remain in its current state.

Girard will undoubtedly draw a ton of defensive attention. Edwards did a lot of his work this past season with the starters, running a lot of four-out offensive sets with three prolific outside shooters in Buddy Boeheim, Girard, and Cole Swider and another player who often set up outside in Jimmy Boeheim. With three of those four out the door, Edwards is not likely to get lots of open space in the paint with the same frequency next season.

So, with a less explosive offense, it would make sense that the team would try to slow things down, grind out defensive stops with a more athletic version of the zone, and pull out some lower-scoring affairs. The 2-3 zone should definitely be better with Edwards’ experience from last season helping him grow into as a stronger defensive backbone.
...

Syracuse football fans might want to consider buying an NFL jersey for one of their own. The only question is, which one?Brad Klein explains. Plus, Dino Babers and Syracuse football have a lot to cover this offseason. Find out what the top of the priority list should look like. Syracuse basketball is already turning heads on the recruiting trail for 2024, but how does that relate to 2022's class? 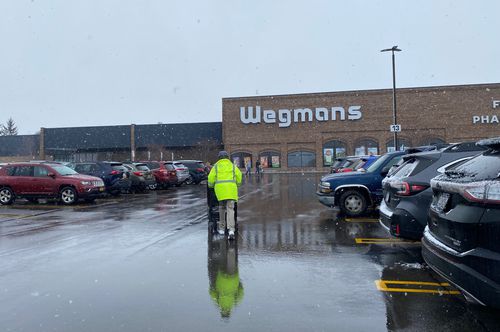 Wegmans to open another store in New York (PS; Doran)

Rochester-based Wegmans has announced plans to open its first store on Long Island.

The 100,000-square foot store will be located in Lake Grove, in a Suffolk County shopping plaza at the corner of Middle County and Moriches roads.

Wegmans has not announced a timeline for when the store would be built, or when it would open.

Wegmans has entered into an agreement to purchase 8.5 acres of the existing 28-acre DWW plaza, company officials said. Prestige Properties and Development will continue to own and operate the remainder of the plaza, according to a Wegmans news release.

Wegmans operates 106 stores in seven states and has more than 50,000 employees chainwide. The company has announced plans for additional stores in Virginia, Delaware, and Manhattan, all scheduled to open over the next two years,

Wegmans also plans to construct a two-story store in Connecticut. That store will be in Norwalk.