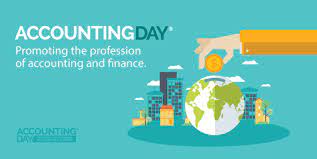 While accounting may seem like a boring profession, it’s vital to every business out there. Without accountants, people won’t get paid promptly nor be able to understand their debits and credits. Even with an accountant, these can still be hard to understand. Accounting is work that isn’t something many people enjoy.

Accountants enjoy the prospects of so much that they form their whole career around managing numbers and company finances. That’s why, for those mathematicians out there in the industry, there is International Accounting Day to celebrate! 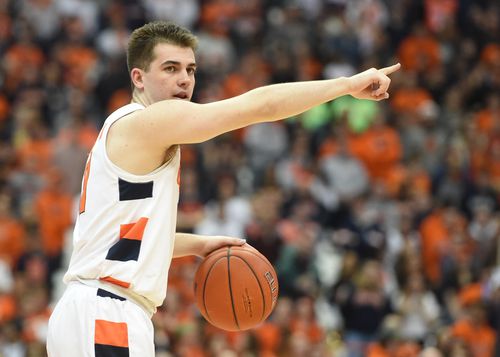 Syracuse guard Joe Girard III (11) during a game against Pittsburgh on Saturday, Jan. 25, 2020, at the Carrier Dome in Syracuse, N.Y. (Dennis Nett | dnett@syracuse.com)

What did Syracuse do this past basketball season that it had done only once in past 25 years? (Mike’s Mailbox) (PS; $; Waters)

Sometimes I get questions from readers that require me to do a good bit of research.


That’s the case with the first question in this week’s Mailbox. That’s why I’m just getting around to a question regarding last year’s Orange and a remarkable statistic that had happened only one other time in the past 25 years.

Q: This past season, the five Syracuse players who started the most games averaged at least one assist per game. How often has that happened in the Jim Boeheim era?

Mike: When all five of Syracuse’s main starters finished this past season with at least one assist per game, it didn’t seem all that remarkable.

It turns out that having the five players who started the most games all finish with at least one assist per game is actually quite rare.

Syracuse has had just seven teams do it in Jim Boeheim’s 46-year coaching tenure, and it’s happened just twice in the past 25 years.
...

At a recent AAU event in Pennsylvania, multiple four-star and five-star Syracuse basketball recruiting targets proved among the best performers at this showcase, according to experts.

I came across a handful of comments from national recruiting analysts and scouts that spoke to the stellar outputs given by at least three top-flight prospects who hold scholarship offers from the Orange coaching staff.

This event, by the way, is known as the KYDA Invitational, and a bunch of really good grassroots basketball squads suited up during the showcase that took place in Scranton, Pa.

Syracuse basketball recruits balled out at an event that featured top AAU teams.

National scouting service ELITE High School Scouting said via Twitter that the 6-foot-4 Jackson tallied 26 points in one contest, “showing a great blend of pace + skill with his elite athleticism.”

The ‘Cuse offered Jackson last month and has seemingly made him a priority target in the 2023 cycle. His AAU squad is WE R1, and Jackson attends the Academy of the New Church in Bryn Athyn, Pa.
...

Former Syracuse basketball star Buddy Boeheim struggled in his first game at the 2022 NBA G League Elite Camp this week, but the 6-foot-6 shooting guard sure did make up for it during his second contest in front of professional scouts, coaches and front-office execs.

Boeheim, one of the top scorers in the Atlantic Coast Conference over the past two seasons, was one of 44 players invited to this year’s NBA G League Elite Camp, which was held on May 16 and May 17 at the Wintrust Arena in Chicago.

At this camp, Boeheim and others had been competing in games, while also doing strength and agility drills, in front of personnel from both the NBA and the NBA G League.

According to a tweet from ESPN NBA Draft analyst Jonathan Givony, seven players who suited up at the NBA G League Elite Camp have received invites to the 2022 NBA Draft Combine, which is also taking place at the Wintrust Arena, from May 18 to May 22.

Unfortunately, and somewhat surprisingly, Boeheim didn’t get an invite to the combine.
...

Steve and Paulie discuss the end of the Crunch season and Buddy Boeheim's performance in his G League Elite Camp scrimmage prior to their discussion with lead anchor from Sirius XM PGA Tour Radio Brian Katrek. Later, they are joined by Kayla Treanor to preview the quarterfinal matchup with Northwestern.

Boeheim is college basketball’s oldest coach. Another CNY native could be the youngest (PS; $; Axe)

The oldest and youngest coaches in college basketball now have direct ties to Central New York.

Syracuse University men’s basketball coach Jim Boeheim, 77, has been the elder statesman of Division I college basketball for a few years now.

Matt Bolton didn’t set out to become the youngest coach in college basketball, but it looks like he now has that title.

Bolton, a Cato native, was promoted last week at the age of 25 to lead the University of the Ozarks men’s basketball program, a Division III program in Clarksville, Arkansas. Bolton served as an assistant coach there last season. 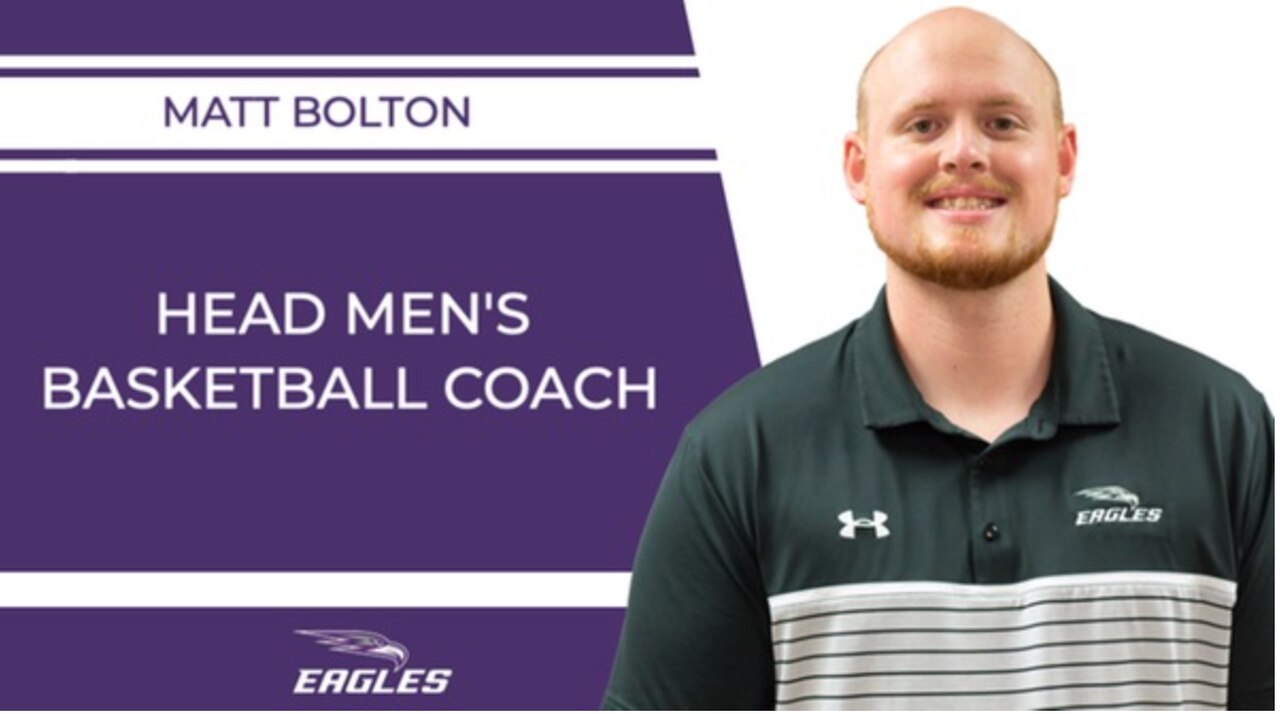 Cato native Matt Bolton, 25, is believed to be the youngest head coach in college basketball. 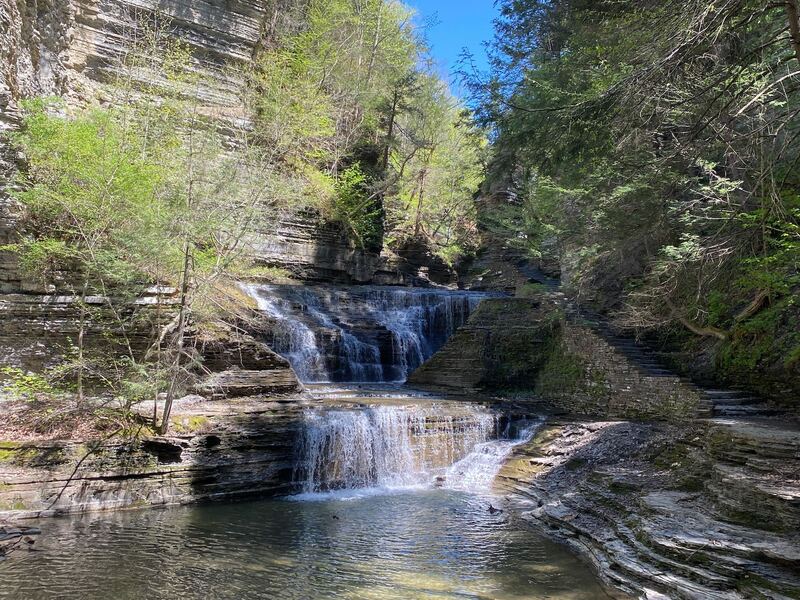 The scenic Buttermilk Falls is located in Ithaca — the perfect summer day trip if you’re looking for a change of scenery.

Splash into these 5 waterfalls in the Syracuse area this summer (DO; Bailey)

As the spring semester ends and its stressors begin to subside, this summer is the best time to check out waterfalls around the Syracuse area. Each waterfall has its own quirks and characteristics, making them all a new adventure to take on solo or with friends and family.

The Daily Orange explored some of these aquatic wonders. Here’s a break down of a few you can visit too:

Located about 25 minutes from Syracuse University in Pompey, New York, Pratt’s Falls offers both a visually impressive waterfall and plenty of opportunities for family activities. The park is dotted with picnic tables and grills, giving visitors a chance to experience the natural beauty of the 137-foot waterfall while still relaxing and conversing.

But leisure is not all the park specializes in. It also contains 6 miles of hiking trails, with the longest one, the North Rim, stretching 2.6 miles. The shortest one, the Falls Trail, is only 0.6 miles, but still brings hikers to the centerpiece of the park, Pratt’s Falls itself.

The park’s summer hours are from 7 a.m. until 8:30 p.m. April to August, allowing adventurers and waterfall lovers from all over to visit the magnificent falls.

After driving through small towns and farmlands, this unique waterfall is a welcoming, undemanding park. Thirty minutes from SU, Tinker Falls is great for walking and light hiking. The falls do not have strong water pressure for most of the year, allowing visitors to safely walk close to the waterfall and even follow a path behind it.
...