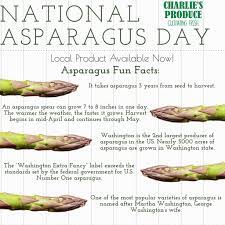 Asparagus, from the genus family Asparagaceae, is made up of more than 200 species. The most common and economically important is garden asparagus, which is cultivated to be eaten, and is celebrated today! It is usually green with a purple-tinged top, but white asparagus is another common variety and is often grown in Europe. In particular, in France's Argenteuil, asparagus is grown underground so that chlorophyll does not develop. This white asparagus is thick, is smoother than green types, and is known for its tenderness and delicate flavor. There is also a purple variety of asparagus called viola.

Asparagus was a delicacy of the ancient Romans and Greeks, and its name comes from the Greek word "asparagos." The name first appeared in print in English around 1000 CE. Native to the Eastern Hemisphere, it is not known exactly when it came to America; there is record of it growing in New Jersey by at least 1740. It was being grown in California by the 1850s, and 70 percent of the national crop is still grown there.

Syracuse basketball offered class of 2023 shooting guard Reid Ducharme last August following his Elite Camp performance. Considered one of the best shooters in the class, the 6-6 guard has stayed in contact with the Orange ever since, primarily through assistant Gerry McNamara. Ducharme says he has now scheduled an official visit to Syracuse that will take place June 14th-16th.

Ducharme stars for Brewster Academy in high school and runs with BABC for AAU ball. In addition to Syracuse, he holds offers from DePaul, Iowa, Penn State, Providence and Stanford, among others. He was named Second Team All-NEPSAC AAA as a junior and has enjoyed a solid AAU season as well. Ducharme was named to the Nike EYBL Orlando Third team after averaging 16 points, four rebounds and one steal per game. He was also named the MVP of the All Academic Rising Stars game with 35 points.

"It came down from coach Boeheim and it was after we had finished talking," Ducharme said after picking up the offer last August. "He went over to me and my dad and just said that he wanted to make sure I knew that I had an offer from him. I was really excited when I heard say that because Syracuse is definitely a school I could see myself playing for. For it to come from a legendary coach like Boeheim was really cool."
... 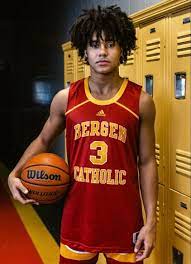 Multiple media reports of late have suggested that Syracuse basketball, Texas Tech and Tennessee have been recruiting 2024 five-star prospect Elliot Cadeau the hardest.

Of course, those squads prioritizing the elite 6-foot-1 point guard could change as his recruiting process carries onward. But for the time being, it seems, Orange coaches are in heavy pursuit of Cadeau, who is ranked as a top-10 national prospect and the No. 1 point guard in his class, according to numerous recruiting services.

I’ve written lately that it appears the ‘Cuse has a good shot at landing an official visit from Cadeau at some point in the future. And he’s already starting to line up official visits, although at this juncture, his planned trip so far is to another suitor, not the Orange.

Offered a scholarship by the ‘Cuse last November, Cadeau attends Bergen Catholic High School in Oradell, N.J., and he runs with the New York City-based New Heights Lightning on the AAU circuit in Nike’s EYBL league.

To date in the spring portion of the grassroots basketball circuit, the New Heights Lightning is deemed one of the top AAU squads around the country, according to analysts and scouts.
...

Four-star combo guard Judah Mintz, one of six commits for Syracuse basketball in the 2022 recruiting cycle, is among the highest-rated Orange signees that the program has hauled in over the past two-plus decades, according to data from the industry-generated 247Sports Composite.

The 6-foot-3 Mintz, who had a stand-out senior season for the top-10 Oak Hill Academy in Mouth of Wilson, Va., during the 2021-22 campaign, checks in at No. 45 across the country in his class, per the composite.

Some individual recruiting services, like ESPN, have Mintz higher than No. 45, while others, such as On3, have him placed lower within the 2022 cycle.

That’s why for the purposes of this article, in which I’m examining Mintz’s national ranking as compared to other highly rated Syracuse basketball commits dating back to 2002, I’m relying on the 247Sports Composite, which aggregates individual rankings into its composite ratings.
... Late last week, Syracuse began releasing its schedule for the 2022-23 season. So far, the Orange have confirmed Lehigh and Colgate as opponents. Also, sources say Bryant will come to the Dome in late November.

Two of those programs made the NCAA Tournament, but that isn’t exactly elite competition. Also, even though March Madness sweetheart Doug Edert just transferred to Bryant, the competition isn’t exactly exciting either. It would benefit Syracuse greatly to have some marquee matchups before ACC play begins for multiple reasons.

That’s not to say SU is planning a cakewalk of a non-conference schedule. The ACC-B1G challenge is always exciting. Syracuse is participating in the Empire Classic in Brooklyn Thanksgiving week. That event features old Big East rival St. John’s. It’s also safe to expect Georgetown to visit the 315. But that is nowhere near enough.

It’s hard to imagine Central New York is eager to buy tickets to see Syracuse play Lehigh. Who would draw a crowd? Uconn, Providence, or another old Big East rival. A high-major program. From a marketing perspective, SU would be foolish to schedule a Bucknell or a Morehead State as opposed to a tougher opponent. It won’t draw a big crowd, nor will it generate TV revenue. Sorry Jessie J, it’s all about the money, and Syracuse will rake it in with tougher opponents.

From a recruiting perspective, the top talents in the country want the best competition. Will five-star and four-star recruits be happy if their visit includes Syracuse playing a Northeastern or a Rider? Absolutely not. But what if the Orange welcome an Oregon or a Seton Hall? That’s more enticing, isn’t it? The top prospects in the country expect to go to the NBA. Weak competition will not prepare them for it. If SU wants top recruits, it must have better competition in the non-conference slate.
...

Oakland University Men's Basketball has announced Syracuse University as a keymark game in the non-conference slate for the 2022-23 season on December 6, 2022 with a time to be announced.

The matchup will continue the trend from the 2021-22 campaign where OU visited four power five conference opponents, defeating Oklahoma State in the process. SU finished 16-17 last season with a 9-11 ACC record.

The Golden Grizzlies last visited the Carrier Dome on December 18, 2019 in a matchup that was featured on ESPNU. Prior to that, Oakland has gone to Syracuse three other times in 2017, 2009, and 2008. Oakland is 0-4 all-time against the Orange.

The 10-year deal rebrands the stadium as the JMA Wireless Dome, or the JMA Dome for short. It marks the first time the Carrier Dome’s naming rights have changed hands since the venue opened in 1980, with the university’s 40-year partnership with Carrier coming to an end last month.

Syracuse University said that JMA Wireless will support the Dome’s digital infrastructure transformation by establishing “advanced connectivity offerings” for fans and other guests.

JMA Wireless was recently appointed to provide 5G equipment for SoFi Stadium, home of the NFL’s Los Angeles Rams and Chargers. The company is also opening a new 5G campus in the City of Syracuse.

The university announced last month that it will embark on the next phase of its work to enhance, elevate and expand the experience at the Dome, which has a capacity of around 50,000 for American football games.
... 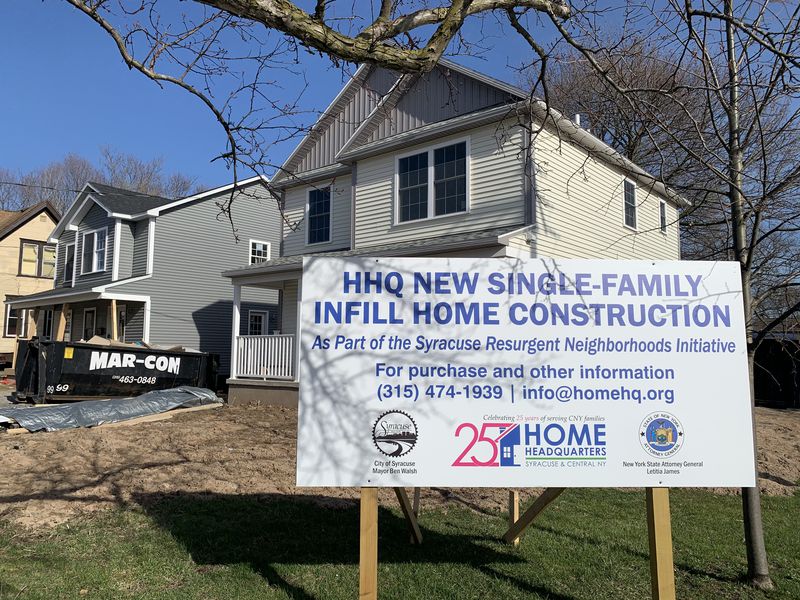 UPDATE: The Common Council unanimously passed a proposal to use $11 million of federal stimulus money to fund the construction of houses in Syracuse.

Syracuse, N.Y. -- Syracuse Mayor Ben Walsh’s plan to build 125 new homes in the city could get an $11 million boost today after a two-year delay caused by the Covid-19 pandemic.

Syracuse lawmakers will vote on whether to set aside $11 million in American Rescue Plan funding -- federal stimulus money -- to build and rehabilitate homes across the city. The money will be used to build at least 30 new homes, according to Neighborhood and Business Development Commissioner Michael Collins.

The $11 million would be the biggest monetary commitment to the project since it was announced.

“We’re now able to reinvest in these neighborhoods that deserve it,” Collins said. “It’s an opportunity we wouldn’t have without ARPA.”

The initiative was first proposed by Walsh in January 2020 at the State of the City address. There, Walsh proposed the construction of 50 single-family, owner-occupied homes and 75 two-family homes. Construction was delayed during the early portion of the pandemic as the state limited 2020 funding it could put toward the housing initiative.

After the homes are built, they’ll be sold for about $150,000, less than half of what they cost to build. Rising construction costs mean each house could cost up to more than $400,000.

Walsh proposed the plan to stabilize neighborhoods, motivate investment and because just 38 percent of Syracuse residents are homeowners, half the rate of Onondaga County’s suburban areas.

The first two houses to be built as part of the initiative were finished last summer. Seven houses have been fully built and another nine are currently under construction.
...