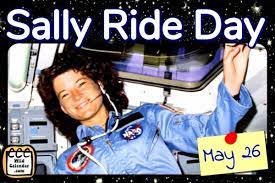 The first American woman in space, Sally Ride, is a role model for young people, particularly for girls and those interested in science and space. At the time of her first flight, Ride also was the youngest astronaut to ever travel in space, being just 32. It is unknown who started Sally Ride Day, which honors Ride and takes place on the anniversary of her birth, but it has been observed at least since 2003, nine years before Ride's death.

Sally Ride was born in Los Angeles on May 26, 1951. She earned a bachelor's degree in English and physics from Stanford University in 1973, and continued her education there, earning a master's in physics in 1975 and a Ph.D. in physics in 1978 following research work on the intersection of X-rays and the interstellar medium. While still at Stanford, she applied for the National Aeronautics and Space Administration (NASA) astronaut program and became one of 35 selected out of 8,000 applicants. Her cohort was designated as NASA Astronaut Group 8 and included NASA's first six female astronauts. After completing her training in 1979, Ride worked as a ground-based capsule communicator (CapCom) on Space Shuttle Columbia's second and third flights, in 1981 and 1982, and also worked to develop the shuttle's robotic arm.

Last month, former Syracuse basketball players Cole Swider and Jimmy Boeheim, both forwards, participated in the Portsmouth Invitational Tournament in Portsmouth, Va., where they suited up in front of NBA scouts and team execs.

Although Boeheim didn’t ultimately land an invite to the 2022 NBA Draft Combine, he did showcase his skills at the G League Elite Camp, and media reports say that he’s also worked out for several NBA squads.

Ahead of the NBA Draft, which will take place on June 23, the terrific Wes Cheng of sujuiceonline.com caught up with NBA scouting consultant Ryan Blake on a podcast.

Blake, who has seen the Boeheim brothers and Swider in action of late at these events I just mentioned, provided some interesting insights into this trio of former Orange players in his chat with The Juice on the Cuse Podcast.

Buddy Boeheim, who led the Atlantic Coast Conference in scoring during the 2021-22 stanza at 19.2 points per contest, recently connected on a ridiculous 71-of-80 attempts from beyond the arc when he worked out for the New York Knicks, according to college basketball insider Adam Zagoria.

“Shooting-wise, when you’re 6-6 and have that kind of shooting touch, that’s always going to be wanted in our game,” Blake said, noting that if Buddy doesn’t get picked in the upcoming NBA Draft, “he’s going to have a lot of inquiries for the (NBA’s) summer league.”
Expand...

Syracuse Basketball: Judah Mintz, from one legendary coach to another (itlh; Adler)

Judah Mintz, a four-star guard who is one of six commits for Syracuse basketball in its strong 2022 class, was a stand-out in his senior year for the Oak Hill Academy in Mouth of Wilson, Va.

This prep-school powerhouse, a top-10 team across the country during the 2021-22 campaign, competes in the National Interscholastic Basketball Conference (“NIBC”), which is arguably the toughest high-school league nationwide, and Oak Hill Academy made the prestigious 2022 GEICO Nationals.

As a senior for the Oak Hill Academy, the 6-foot-3 Mintz was among the leading scorers in the NIBC, and he has also been praised in recent months by analysts and scouts for his defensive prowess, along with his versatile three-level scoring ability.

A native of the fertile Washington, D.C., metropolitan area, Judah Mintz transferred to the Oak Hill Academy after spending his first three seasons at the Gonzaga College High School in D.C.

Four-star guard Judah Mintz committed to Syracuse basketball at the end of March.

While at the Oak Hill Academy this past season, Mintz was coached by the legendary Steve Smith, who is one of the top head coaches at the high-school level in the history of the sport.
... Syracuse Orange men’s basketball coach Jim Boeheim joined former NFL player Greg Olsen on the May 11th edition of the Youth Inc podcast, The pair discussed what it was like for Boeheim to coach his two sons Jimmy and Buddy last year, along with how his sons dealt with external pressure growing up.

Boeheim said last season was the best year he’s ever had coaching due to his sons both playing for the Orange. However, he didn’t always think a future in Division 1 was the path for his sons.

“They had private workouts and weight training but I didn’t think they would be Division 1 players,” Boeheim said. “My daughter did the same thing and she became a good high school player and won three state championships, which have never been done here, and played in a division 2 school at Rochester for a year. But the boys always wanted to be players and kept working at it. They were not recruited in high school, struggled a little bit in AAU, and yet they just kept working. Just because you’re not quite there as a high school senior doesn’t mean you can’t get there.”
Expand...

Regardless of the doubt he once had, Boeheim is nothing but proud of the work and discipline his sons applied to their craft to get to the D1 level.
...

Syracuse basketball had one of its worst seasons ever in 2021-22, and the worst ever under Jim Boeheim when it did not reach .500. The Orange had the 75th highest non-conference strength of schedule according to kenpom.com, which is not great, but compare that to previous years.

The numbers back it up, even with those easier schedules, Syracuse still made it to the NCAA Tournament. Playing a tough non-conference schedule, especially with a young, inexperienced team, would be catastrophic.

Syracuse fans will still show up in big numbers in December no matter who the Orange are playing. No recruit is visiting Syracuse in December, they’re coming in February to big ACC games. December is right in the middle of their high school season anyway.

Playing tough games might build character and give opportunities to build a resume, but it could also take the wind out of a team’s sails early, and demoralize a group. Last year’s game against Colgate signaled what was to come for SU.
...

The topic of NIL is a hot conversation among college athletics right now with most recently Alabama’s Nick Saban, Texas A&M’s Jimbo Fisher and Jackson State’s Deion Sanders exchanging words in the media.

But one coach that thinks athletes being able to profit off name, image and likeness is Syracuse’s Jim Boeheim and he is using North Carolina as a prime example.

Boeheim was asked about the NIL at the NBA Draft Combine last week in Chicago by Adam Zagoria, and he offered up this interesting answer:

“By the NIL, guys at Carolina, guys at Miami, guys at these schools are coming back because they’re making more money than they make in the G league so it wasn’t meant to do that but college teams this year, several, are going to be a lot stronger than they would have been because of NIL,” Boeheim, 77, told me at the NBA Draft Combine last week in Chicago.
Expand...

He took a different route than Saban did and praised ACC teams UNC and Miami with the NIL.

UNC is returning four of their five starters from a team that reached the title game last year and are expected to be the favorites to win it all this season in a few months. A big reason why some of those players returned was to reap the benefits of the NIL and make some money. Caleb Love just recently signed a deal with an agency and both R.J. Davis and Armando Bacot have picked up partnerships.
... 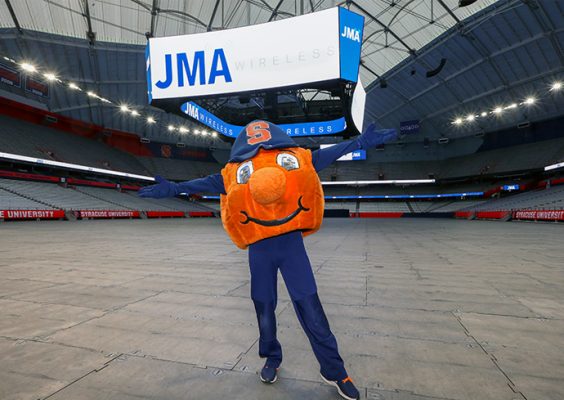 5 Things to Know About the JMA Wireless Dome (syr.edu)

...
Here are five takeaways from the event.


1. The technology transformation will be unlike anything we’ve seen before.​

As the company that was recently tapped to help prepare SoFi Stadium, home of the NFL’s Los Angeles Rams and host of Super Bowl LVI, with 5G technology, JMA has outfitted venues with some of the most advanced technology available. According to Mezzalingua, “There’s a revolution brewing in sports and 5G is at the heart of it.” Connectivity enhancements within the JMA Dome will help optimize performance (e.g., augmented reality sensors; advanced coaching tools; and ultra-fast communication between players and coaches) and create an elite fan experience that seamlessly integrates the in-person experience with fans’ digital worlds. “This partnership will give the JMA Dome the first and most advanced 5G network of any collegiate stadium in the world,” Mezzalingua said. “It will not only transform the experiences of fans, players and coaches, but it has the potential to supercharge the competitiveness of Syracuse University and create excellence at the level that we all expect.”


2. Our Athletics program will benefit tremendously from this partnership and ongoing investments in the building.​

“This announcement, combined with the upcoming renovations to the JMA Dome, sends a very clear message about the future,” Wildhack said. “Syracuse University is committed to its athletics program. We are committed to providing the best experience, competitively and academically, for our student-athletes to compete successfully in the ACC and on a national level.” Or as Coach Legette-Jack put it, “We’re coming and we’re putting you on notice right now, we’re ready to go!”


3. The entire Central New York community will also get a boost.​

In addition to being the venue for hundreds of athletic competitions, the JMA Dome will continue to be a hub of activity and catalyst for economic impact for the greater Syracuse community. Chancellor Syverud shared that the Dome brings upwards of 935,000 visitors and more than $240 million in economic activity to the Central New York region each year. “We think these improvements will make it one of the most attractive venues in the world for large crowds to attend, not just for sporting events but for many types of competitions and concerts,” Chancellor Syverud said. “I’ve learned to be very careful in making predictions, but we expect the economic impact to the region to grow significantly with these enhancements.”


4. The University and JMA Wireless both have deep roots in and an unwavering commitment to Syracuse.​


5. The historic building will never lose ‘that special feeling.’​

“I’ve seen everything that’s happened in this Dome, big and small, exciting, heartbreaking, thrilling, historic,” said Sala. “When we first opened the doors of this building in 1980, I don’t think any of us imagined how special, how sacred, how iconic this venue would become.” Whether you’re there to watch one of your favorite musicians bring down the house, sway and sing the alma mater with friends at Commencement, or cheer on the football team alongside 35,000 of your closest friends, the JMA Dome will continue to deliver those uniquely Orange experiences—now with a new name, a transformative partner, and more power, speed and connectivity than ever before.
... 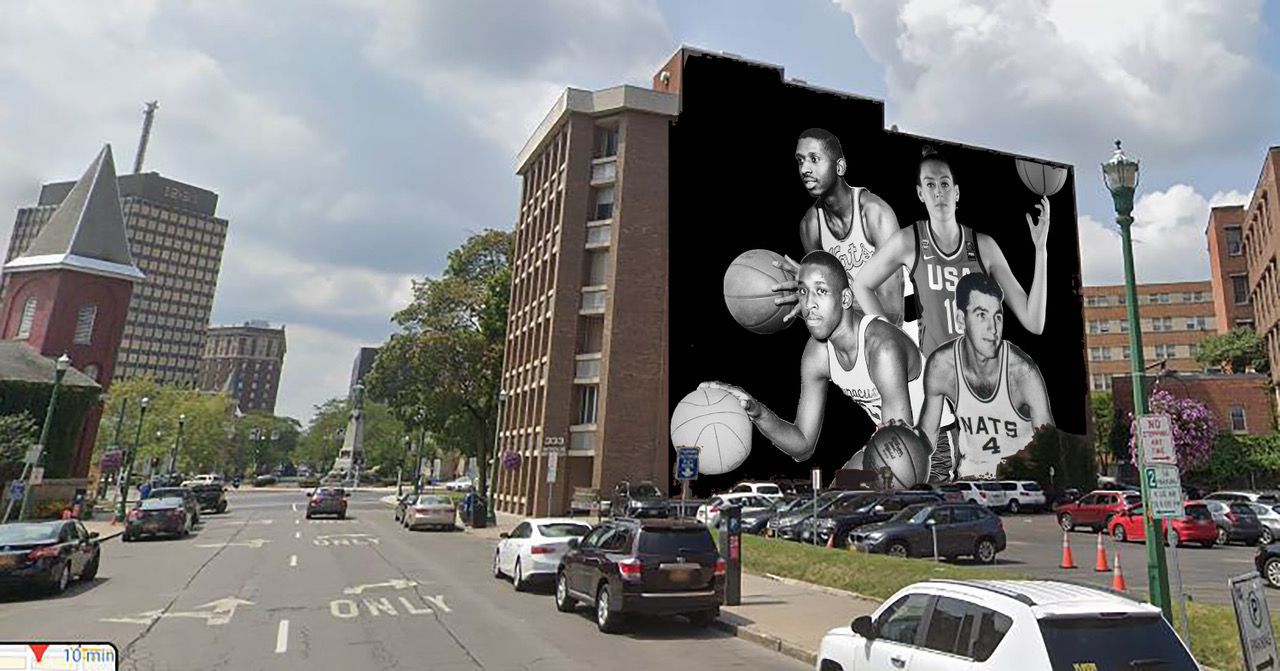 Work began on a massive downtown mural that organizers are calling the “Mount Rushmore of Syracuse basketball.”

Artist Jonas Never began work on the Monroe Building at 333 East Onondaga St., adding simple grid lines to the wall on Wednesday morning, to help him map out the mural sections. He hopes to start painting next week, if rain holds off.

Never hails from Venice, California. He will live in Syracuse for roughly a month as he completes the project.

Never has been creating photo-realistic murals of famous faces for about 16 years. Never’s portfolio includes large-scale tributes to LeBron James, Jackie Robinson, Ronda Rousey, Bob Ross, Kid Cudi, and Kobe Bryant in murals across the United States. Many are famous athletes or musicians.

Several people stopped to chat with Never on Wednesday.