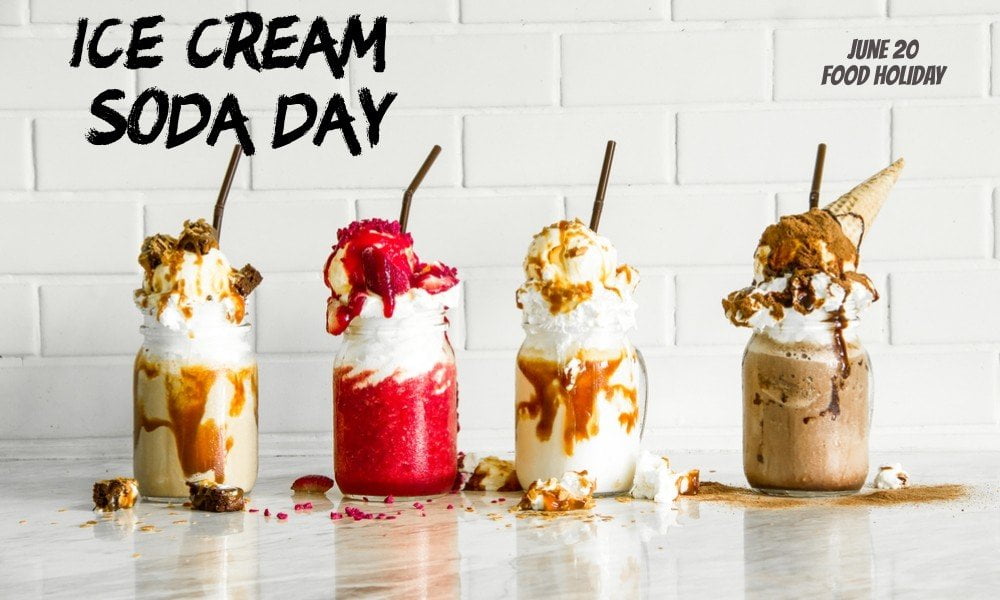 This is a day dedicated to ice cream sodas, also known as ice cream floats, which are drinks consisting of ice cream in a soft drink, or in flavored syrup and carbonated water. There are innumerable variations of the drink that can be made by changing the flavor of either the ice cream or the soft drink. Which variations are the most popular depend on where in the world you go. Most likely, Robert McCay Green invented the ice cream soda in 1874, in Philadelphia, Pennsylvania, at the semicentennial for the Franklin Institute. It is believed that Green ran out of ice for the cold drinks he was selling, so he used some ice cream from a nearby vendor, thus creating the new type of drink. By Green's account, the ice cream soda's creation was no accident, but something he worked to create so that it could be used to lure customers away from a bigger, fancier soda fountain, to his own. There are other accounts of how the ice cream soda was invented, but the story of Green is the most prominent. It didn't take long for the ice cream soda to gain in popularity, and it was served at soda fountains across the country.

One of Syracuse basketball's top targets in the 2023 class is sharpshooting guard Reid Ducharme. The 6-7 shooting guard, who stars for BABC on the EYBL circuit and Brewster Academy in high school, got to see just about every aspect of the program during his trip.

"I was able to workout with the players," Ducharme said. "I did that both days. I had meetings with academic advisors. I looked at the Faulk school, that was pretty interesting. They have an NIL class that they just started, so I like that. Had meetings with coach. We went to coach Boeheim's house for a barbecue with the pool and lawn games and the players. That was fun."

The workout with the players included pickup games with current Orange players.

"The first day we played five on five," Ducharme said. "The second day we were only able to play four on four. We got to go up and down a lot, kind of a look at how they run their offense. Not the full offense, but the baseline stuff in how they operate and what they're looking for. It was really cool to play with them.

"We kept switching up so it was never the same team. I pretty much played with everybody on the team. I thought I played well. I didn't feel out of my place. I felt confident playing with those guys. I felt like I belonged there. It was good to see guys like Joe Girard, who is recognized in college basketball, and see how they work to learn from them and guys like that on the court."

The barbecue at Jim Boeheim's house was also a highlight as it allowed Ducharme to see the personal side of the coaches as well as the culture of the program.
...

Right now, Syracuse doesn’t have a commitment in the basketball class of 2023. That’s a prospect that’s starting to get scarier and scarier as the AAU circuits roll on. The top player in the 2023 class, small forward DJ Wagner, plays in nearby Camden, New Jersey, and there’s a wealth of hooping talent in the Garden State. However, there is also a bevy of players slightly north waiting for offers. Right now, New York’s best players are not considering Syracuse.

Last August, Spencer Mahoney, the top player in New York, did an interview with Stockrisers’ Jake Weingarten. He mentioned Harvard, Cal and DePaul as schools which were heavily involved in his recruitment. When it came to Syracuse, he said, “Cuse offer felt great, Coach Griffin’s pitch was that my game would fit perfectly into their system and that it is close to home.”

Cuse offer felt great, Coach Griffin’s pitch was that my game would fit perfectly into their system and that it is close to home.
Spencer Mahoney to Jake Weingarten
Expand...

However, does that mean he’s coming? Probably not. Mahoney, a 6-foot-8 forward from Xaverian in Brooklyn, hasn’t visited the ‘Cuse campus. Instead, he’s gone to DePaul and Northwestern. The Orange could always use more wings, especially if something occurs with one of Benny Williams, Chris Bunch, Justin Taylor or Maliq Brown. Here’s what Weingarten thinks of the wing’s game:

For those who don’t know about his game, Mahoney is a two-guard, or the three, and has great size and is a capable plus defender. He’s a three-level scorer and can hit the outside shot at a very good rate. In addition, he plays his role and will clearly do whatever it takes on both ends to secure a victory. My favorite part of his game is his ability to use his size and get to the rim. If not, he’s taking the outside shot with a very good shot at landing it.
Expand...

Matt Bonaparte and Brad Klein do the Syracuse Basketball $15 challenge.

Who's the top basketball school in your state?

I'll hear arguments for UVa over VT, even after last season.
Where ACC teams got edged out:

The 2022 NBA Finals are officially over. Golden State is the winner, but NBA TV ratings were the loser!
...

Forwards are expected to dominate Thursday’s NBA draft, starting with the trio of Gonzaga’s Chet Holmgren, Auburn’s Jabari Smith and Duke’s Paolo Banchero. They are the headliners at the position and have been widely ranked as the top prospects overall with their size and open-floor potential.

Here’s a look at the draft’s top forwards:

The nation’s No. 1 recruit lived up to expectations for the Zags as a second-team Associated Press All-American.

STRENGTHS: The 7-foot, 195-pound Holmgren has an unusual mix of fluid perimeter skills with a roughly 7-5 wingspan. He averaged 14.1 points, 9.9 rebounds and 1.9 assists while shooting 60.7% alongside a returning AP All-American in Drew Timme.

He made 39% of his 3-point tries and had 14 games with at least two made 3s, showing the kind of consistency sure to pull less-mobile bigs from the basket. And he has the ball-handling skills to take advantage — just look at his length-of-court, behind-the-back drive for a dunk against UCLA for proof — for unique shot-creating potential in such a long frame.


At the other end, Holmgren proved an elite rim protector, ranking fourth in Division I with 3.7 blocks per game.
... 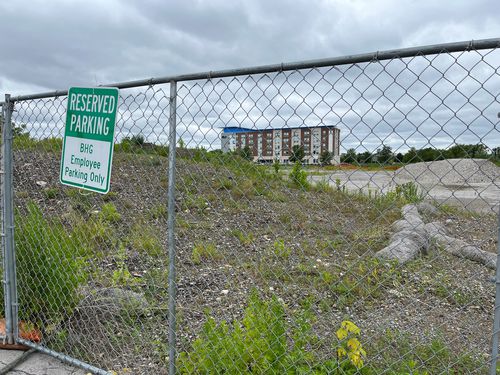 Bankers Healthcare Group had planned to build a new headquarters near the Inner Harbor in Syracuse. Teri Weaver |

A five-story corporate headquarters for Bankers Healthcare Group — now called BHG Financial — was going to have a two-story-atrium, a commercial kitchen, gym and parking for 500 cars.

Syracuse Mayor Ben Walsh and Onondaga County Executive Ryan McMahon were among those who attended a groundbreaking in October 2019. Construction on the $35 million project was to start the next January. Renderings were released amid the fanfare.

The state also stepped up, agreeing to help the project with a $4 million capital grant and $7 million in Excelsior Jobs Tax Credits, which were contingent on the number of jobs the company created. Overall, the company has planned to create 330 new jobs, then-Gov. Andrew Cuomo said three years ago.

The new owner forced the city school district’s bus company, which transports about 11,000 students a day, to find a new home to clear the way for construction.

The headquarters, however, was never built.

Now the site for that headquarters is on the market for $5.6 million. The building was to sit on six acres in Syracuse’s historic Franklin Square, directly across West Kirkpatrick Street, near the Inner Harbor and close to downtown.
...
You must log in or register to reply here.