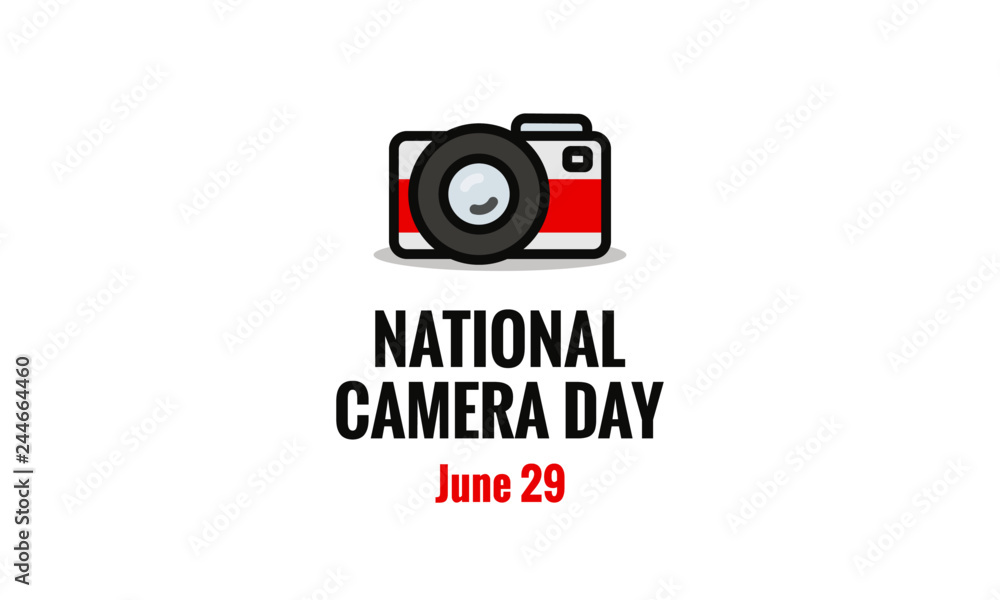 Everything comes into focus on June 29th each year when we recognize National Camera Day. The day commemorates photographs, the camera, and their invention. A camera is an irreplaceable tool used to record and replicate memories, events, and people/places. Before the invention of the camera, the only resource to document a vision was a painting. Capturing an image of a person or place in a drawing took time and skill. Very few people can perfectly draw the likeness of someone, let alone capture the essence of an event.

The power of a camera provided many with a simple, inexpensive, and fast solution. George Eastman, also known as “The Father of Photography,” brought the camera to the masses. While he did not invent the camera, he did develop many additions improving the use, ease, and production of the camera. His developments made the camera widely available to homes around the world.

A Syracuse basketball five-star recruiting target from New York City has moved to the top spot nationally within his class, according to new rankings from one of the primary recruiting services.

has updated and expanded its top-125 player ratings for the 2024 class, and checking in at No. 1 across the country is five-star guard Ian Jackson.

The 6-foot-6 Jackson, offered a scholarship by the Orange coaching staff in April, recently was selected to the 2022 USA Basketball U17 national team, which will soon compete at the upcoming FIBA U17 World Cup in Málaga, Spain.

Jackson, who has picked up a few offers from blue-blood programs of late, is a rising junior at Cardinal Hayes High School in the Bronx, N.Y., which is an excellent squad.

MaxPreps named him the national sophomore of the year during the 2021-22 campaign, and Jackson has proven electric this spring and early summer on the AAU circuit suiting up for the Bronx, N.Y.-based Wiz Kids in the Adidas league.

In the new national rankings for his cycle, Jackson moved up two spots to claim the No. 1 overall rating.

I know that a lot of my fellow ‘Cuse fans are likely to opine that Syracuse basketball has a tiny chance of ultimately landing Jackson, and they could be right.

Then again, in late May, we noted in an article how Jackson had said in several interviews that the Orange was among the programs in consistent communication for him.

Of course, the recruitments of these top-flight prospects will ebb and flow, but I always want to see the ‘Cuse pursue five-stars like Jackson.

Besides Syracuse basketball, other early offers that had come in for him included from Kansas, UCLA, Oregon, St. John’s, Seton Hall, Oklahoma State, Connecticut, Nebraska, Kansas State and Bryant.
... 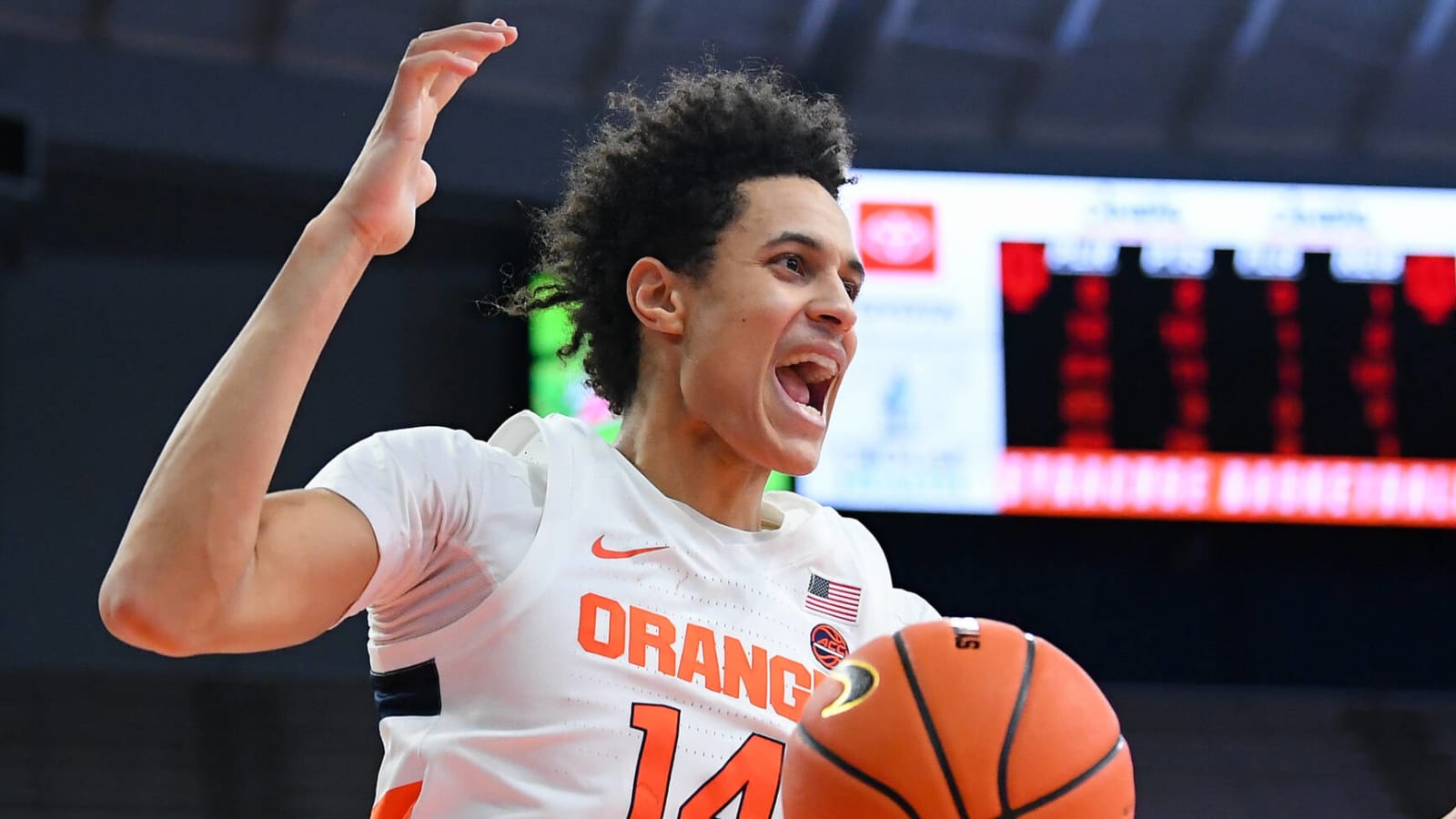 With Mike Krzyzewski officially out of the picture at rival-Duke, Jim Boeheim of the Syracuse Orange now stands alone at the top of the all-time wins leaderboard for active head coaches in Division I men's basketball. The 2021-2022 campaign was an underwhelming one for Syracuse, as it failed to qualify for the NCAA Tournament for just the fourth time in 14 seasons and finished under .500, remarkably, for the first time in the Boeheim-era.

One of the biggest blows to the Orange's tournament chances last winter was the season-ending wrist injury to starting center Jesse Edwards in February. On Tuesday morning, CBS Sports insider Jon Rothstein gave an update on Edwards.

Edwards' points and rebounds per game were career highs through his first three seasons, as were his steals (1.1) and minutes per contest (27.8.) He has also shot a team-best 69.1% from the field and 59.8% from the free throw line.

The Wolfpack is coming off their worst season under Kevin Keatts. Pat Welter explains how NC State men's basketball is planning to get things back on track. 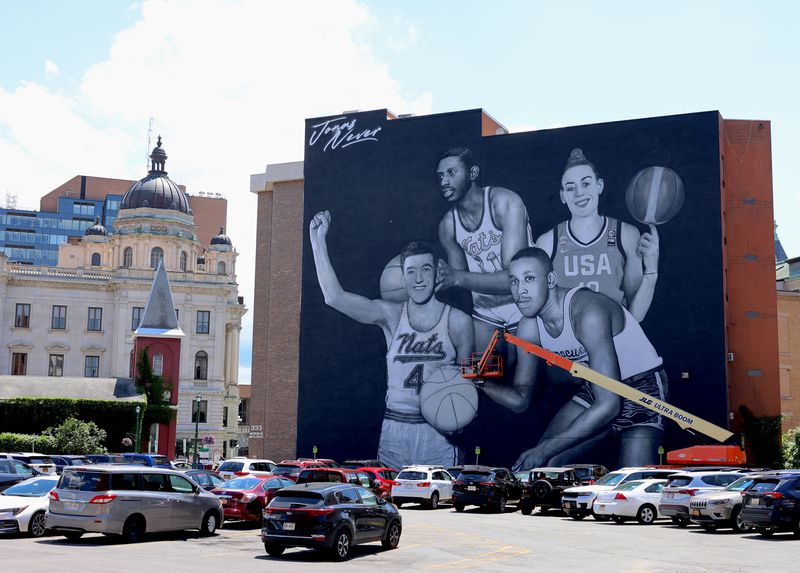 Never, of Venice, California, began work on the Monroe Building at 333 East Onondaga St. on May 25. Never estimated the building is 90 feet wide and 70 feet high. He painted about one person per week and completed the mural within a month.

Over the last month, many passersby stopped on East Onondaga Street to watch him work, calling the mural “beautiful” and “so realistic.”

NBA star Danny Schayes, whose father was basketball legend Dolph Schayes, visited Syracuse in mid-June to see the mural and help unveil a sign for Earl Lloyd Way outside the Oncenter War Memorial, where Lloyd competed for the Nationals from 1952 to 1958. The honorary street name covered the 200 block of Madison Street.

“What makes the mural so poignant is it ties the evolution of Civil Rights in the 50s and 60s with Earl and Manny, that entire half century, and then it brings it into the present day with Breanna and makes that message current and fresh,” Schayes told syracuse.com. “The irony is some of the issues that were big then are as big or bigger today.” 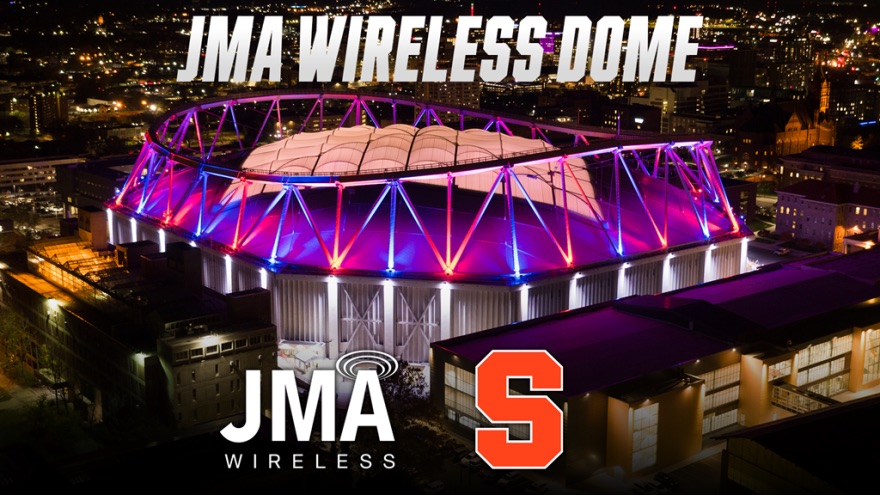 Y'all need to get it LIT up in the JMA!
You must log in or register to reply here.