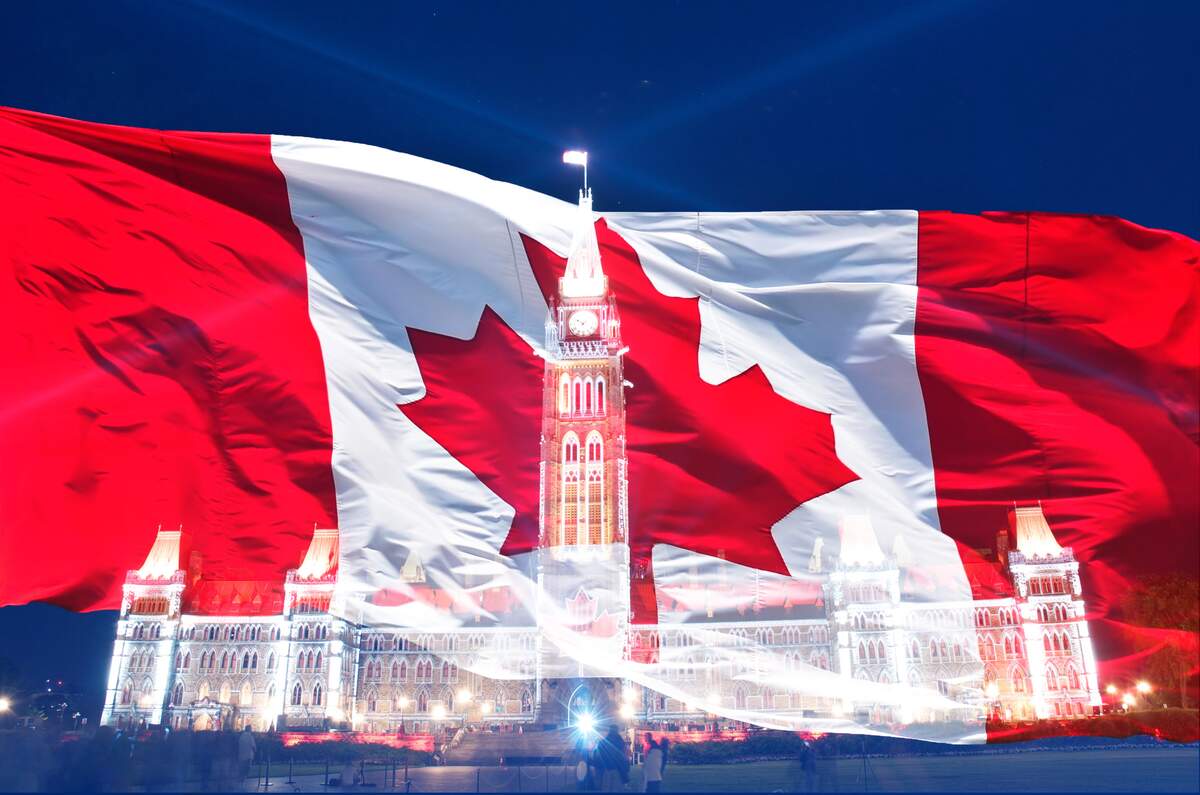 Canada Day celebrates the country's movement to self-government. On July 1, 1867, Canada became a self-governing Dominion of Great Britain, after the passage of the British North America Act. It also became a federation with four provinces: New Brunswick, Nova Scotia, Ontario, and Quebec. These provinces were made from the British colonies of New Brunswick, Nova Scotia, and the Province of Canada (previously Upper Canada and Lower Canada). The Act allowed for other provinces and territories to join the country in the future. Indeed, more land was added, and Canada now consists of ten provinces and three territories.

On June 20, 1868, the Governor General said the anniversary of Canada becoming a Dominion should be celebrated. It became a statutory holiday in 1879 and was known as Dominion Day at the time. The first official celebrations weren't held until 1917, on the Dominion's fiftieth anniversary. It began being celebrated more frequently after World War II, and even more so after the 100th anniversary in 1967. It began being called Canada Day by celebrants and has been officially known as Canada Day since 1983. This was stipulated by the Canada Act of 1982. Canada also became a fully independent country with this act, no longer being under the dominion of Great Britain.

The Syracuse basketball non-conference calendar in 2022-23 is almost completed, and it doesn’t appear to be as brutal as a season ago.

Then again, we have no idea how good (or not good) the teams that the Orange will play in the non-conference slate this coming term will prove, and everything in that regard is pure speculation.

But at least on paper, 2022-23 seems less daunting as far as the ‘Cuse non-conference docket is concerned, and for me, I think that’s a good thing.

I say this, because the Orange ahead of 2022-23 has a vastly remade roster. Several roster members from a year ago exhausted their eligibility or left via the transfer portal.

In the upcoming campaign, the ‘Cuse does have several veterans back, but the roster also features six incoming freshmen, rising sophomore forward Benny Williams and center Mounir Hima, who transferred in from Duquesne and has three years of eligibility left.

Most of the Syracuse basketball non-conference foes in 2022-23 are known at this point.

I do believe that the 2022-23 line-up for the Orange will boast a lot of athleticism and talent, but it’s also pretty darn young, save for a few seniors like guards Joe Girard III and Symir Torrence, as well as center Jesse Edwards.
...

The Atlantic Coast Conference opponents for Syracuse basketball during the 2022-23 season have gotten disclosed, and on paper anyway, the 20-game slate appears to be favorable for the Orange.

Of course, making any sort of prognostications now, with the season several months away, is pure speculation. However, I do think that the ACC calendar will prove more than manageable for the ‘Cuse, a squad with a significantly revamped and relatively young roster coming into the 2022-23 campaign.

Syracuse basketball, hopefully, can pile up victories in ACC competition.

According to early projections from pundits (and I acknowledge these predictions are super, duper early), North Carolina and Duke are expected to be at the top of the conference.

Both went to the Final Four in the 2022 NCAA Tournament, with the Tar Heels reaching the title game before falling to Kansas. The Blue Devils, under first-year head coach Jon Scheyer, boast a ridiculous 2022 recruiting class.

So for Syracuse basketball to get only home battles with Duke and UNC is huge. Some pundits, at least so far, are eyeing Virginia as the third-best ACC group, with the Orange playing on the Hill and in Charlottesville, Va., versus the Cavaliers.

The road-only match-ups for the ‘Cuse don’t appear to be tremendously daunting. Of the four here, Miami was an Elite Eight team this past spring and could be strong once again in 2022-23, but Clemson, Florida State and Louisville aren’t vastly scary to me.
...

Syracuse men's basketball has learned which teams in the Atlantic Coast Conference it'll be playing at home, away, or both this winter. The conference announced its 2022-23 regular-season matchups on Thursday.

In Year 47 of the Jim Boeheim era, the Orange will take on six programs twice before the postseason, once in the JMA Wireless Dome and once on the road: Boston College, Pittsburgh, Georgia Tech, Notre Dame, Virginia and Virginia Tech. Home-only foes include Duke, North Carolina, North Carolina State and Wake Forest while SU will travel to face Clemson, Florida State, Louisville and Miami.

Game dates and tip times will be announced by the ACC at a later date.

The Lakers are among just a handful of teams that will participate in games in San Francisco and Salt Lake City that serve as a lead-in to the better-known summer league in Las Vegas.

Swider signed a two-way deal with Los Angeles shortly after the conclusion of the NBA draft last week.

The Lakers and three other teams will play doubleheaders on Saturday and Sunday in the California Classic in San Francisco. Los Angeles is scheduled to play Miami on Saturday. The game is scheduled to start at 5 p.m. Eastern time on NBA TV.

On Sunday, the Lakers will play Golden State in a 7:30 p.m. (Eastern) tipoff on NBA TV.

Steve and Paulie open the show comparing the Syracuse Football schedule to the Men’s Basketball schedule. Then, 2-4-7 Sports’ Stephen Bailey hops on to discuss Dino Babers’ job security and the QB situation. Lastly, the guys react to Syracuse Men’s Basketball Freshmen’s sneaker choices and look back at some of their favorites growing up.

Part I: Best moments for each 2022 Boeheim’s Army member - The Juice Online (the juice; Gustin)

This is part one of two, and the second part will run tomorrow.

The new 2022 roster is once again made up of former Syracuse and non-Syracuse collegiate and professional players. As we look ahead to this year’s tournament and Boeheim’s Army squad, here are each player’s top career moment.

Although only a one year Syracuse player, veteran wing Andrew White III celebrated his Senior Day in Orange by dropping 40 points on 75% shooting against the Yellow Jackets.

The regular season finale brought Syracuse to 18-13 on the year but eventually falling short of an NCAA bid. However this performance by White on his Senior Day still remains significant because of the pure efficiency of the shooting guard.

White shot 8-9 from the three point arc against Georgia Tech and had almost half of the teams ninety points. With the largest attendance in college basketball that year at the Dome, the senior guard brought in on his day, creating his best memory at Syracuse.

To close out the Big East era in 2013, Syracuse faced Georgetown in the Big East Conference Semifinals for the last ever conference matchup between the historic rivals. The overtime thriller was down to the wire in historic Madison Square Garden between two top teams in the country.

Despite finishing with just six points on 3-16 shooting, Fair drove to the rim up two with less than two minutes left. An emphatic slam over Otto Porter Jr. pumped up Fair and Syracuse to get the job done late and advance to the Big East Finals.
... 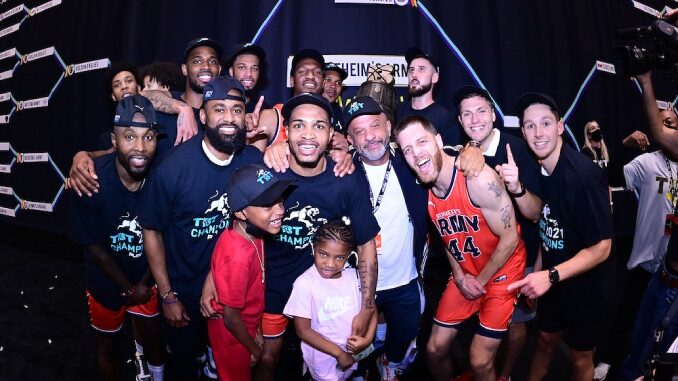 On Thursday, we did Part I of the best moments for each Boeheim’s Army team member, which included CJ Fair, Andrew White, Kyle Witjer and DJ Kennedy.

Today, we finish out the remainder of the roster.

Known for his aggressive playing style in his career in Orange, at just 6’10, 200 pounds, Marek Dolezaj was a versatile forward for many years at Syracuse.

In 2001 while facing Georgetown, Dolezaj with just a minute left in a seven-point game, took a hand to the face and one of his front teeth popped out and blood gushed from his mouth. Instead of coming out of the game, Dolezaj stayed in to help the Orange get the win.

While memes surfaced the internet postgame, one thing was for certain. Despite his build Dolezaj was the toughest guy on the court battling every night. In his senior year, this moment added to Dolezaj’s known resume of being that guy.

While competing in one of the best conferences in basketball, Deandre Kane helped lead his team to a Big 12 Tournament Championship back in 2014.

Kane, with 17 points, 7 assists, and 7 rebounds, dominated Baylor in the championship game to give the Cyclones their first Big 12 Championship since 2000.
...

A total of seven standout athletes and an award-winning broadcaster have been selected for the Greater Utica Sports Hall of Fame’s Class of 2022.

The Greater Utica Sports Hall of Fame’s annual induction ceremony and banquet is scheduled for Sunday, Sept. 18, at Delta Hotels by Marriott in downtown Utica. Tickets for the event, available at CNY Awards and Apparel in the New Hartford Shopping Center, are $50 for adults and $25 for those under 18 years old.

Myslinski, son of longtime Rome Free Academy assistant football coach Tom Myslinski, was an All-Southeastern Conference lineman at the University of Tennessee, where he also starred in track and field. He had a long playing career in the National Football League and has served as strength and conditioning coach for several NFL teams.

Burton and Babiarz are two of the most accomplished basketball players ever from the Mohawk Valley.

Brown was an outstanding football and track and field athlete at Thomas R. Proctor and Notre Dame high schools in Utica. He went on to start for four seasons in the defensive backfield at Ohio State, making the All-Big 10 team twice.

Mauro, a graduate of Notre Dame High School, earned many honors as a baseball player at the United States Naval Academy, where he played with his brother, Steve.

She went on to St. John’s University, earning All-Big East honors. She remains among the top 5 in the school’s single-season leaders in goals and points.

He spent the early years of his career at WIBX Radio in Utica, and has been the television voice of the Philadelphia Flyers for nearly 30 years.
... 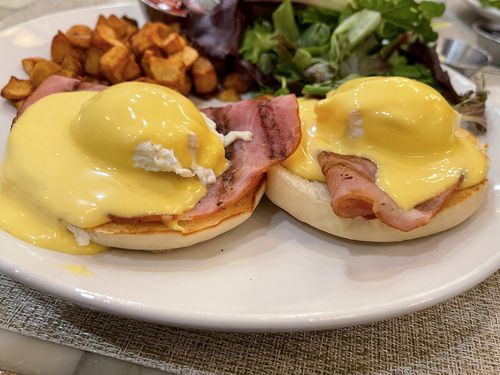 A brunch worth waiting for at Oh My Darling (Dining Out Review) (PS; $; Paventi)

The thing we liked best from our dinnertime visit to Oh My Darling three years ago was how the kitchen made the most from simple flavors by pairing them together to create a complementary finished product.

We recently returned for Sunday brunch and found the same story at a different time. Take the lemon ricotta pancakes ($16), for instance. The stack of three cakes was fluffy and dense with slightly crispy edges. Though the batter is merely a blend of dairy and flour, there was a richness to each bite. Homemade lemon curd painted across the top of each pancake offered a tangy brightness, while fresh berries brought color and a hint of sweetness. Ramekins of syrup and butter sat untouched, as the blend of flavors was just right.

Ryan and Leigh Ann Benz opened the restaurant, and its accompanying speakeasy-style bar The Fitz, in March 2019 as part of their redevelopment of the Whitney building on South Salina Street in downtown Syracuse. It remains a highly-regarded spot at recommendation websites and earns high marks and praise from commenters at syracuse.com’s Where Syracuse Eats Facebook group.
...