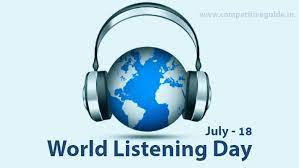 World Listening Day is an annual global event that was started in 2010 by the World Listening Project, a group "devoted to understanding the world and its natural environment, societies and cultures through practices of listening and field recording." The day celebrates the listening practices that occur around the world, as well as acoustic ecology—a discipline that studies the relationship between humans and the natural world in regards to sound.

Dozens of organizations and thousands of people have participated in the day, and each year there is a new theme and events that reflect that theme. People participate in the day by taking soundwalks, listening to field recordings, going to site-specific performances, going to other listening events and concerts focused on the theme, and going to talks and lectures regarding listening and acoustic ecology. The day takes place on the birthday of Raymond Murray Schafer, a Canadian composer and environmentalist who founded the study of acoustic ecology. He first began studies of it in the late 1960s at Simon Fraser University in Vancouver, Canada.

It’s a massive understatement to say that the 6-foot-11 center is one of the hottest prospects around the country not only in the rising-junior cycle, but nationwide across all classes in high-school hoops.

We recently detailed how, not too long ago, Missi soared from No. 39 overall via to No. 12 nationally, according to that recruiting service. has also installed Missi as five stars.

That rankings jump, though, was just the tip of the proverbial iceberg. Another primary recruiting service, On3, has followed suit with its new 2024 national ratings for Missi, and it is even more bullish on the talented big man.

Syracuse basketball recruit Yves Missi could make a run at No. 1 in his class.

When On3 recently refreshed its national rankings for the 2024 cycle, it placed Missi as five stars, No. 6 overall, No. 2 at center and No. 1 in Maryland.

A disruptive force on the defensive end, Missi is an excellent shot-blocker and rebounder. His offensive skill-set is underrated and improving.

He is a rising junior at the West Nottingham Academy in Colora, Md., and Missi competes in grassroots basketball for the Bronx, N.Y.-based PSA Cardinals in Nike’s EYBL league.

With the contact period opening up in mid-June for college coaches to have the ability to directly communicate with 2024 players, Missi’s recruitment is undeniably going to keep on flourishing.

He’s proven one of the best performers this spring and summer on the AAU circuit, which has helped grow his offer sheet and buoyed his skyrocketing rise in the national ratings.
...

On a Friday Fun Day, Steve and Paulie ponder SU’s desirability in Sports Illustrated’s ranking, and Kevin Wall from NunesMagician gives his thoughts on it and more. Plus, the guys hear from Jacob DeGrom after his start for the Syracuse Mets. 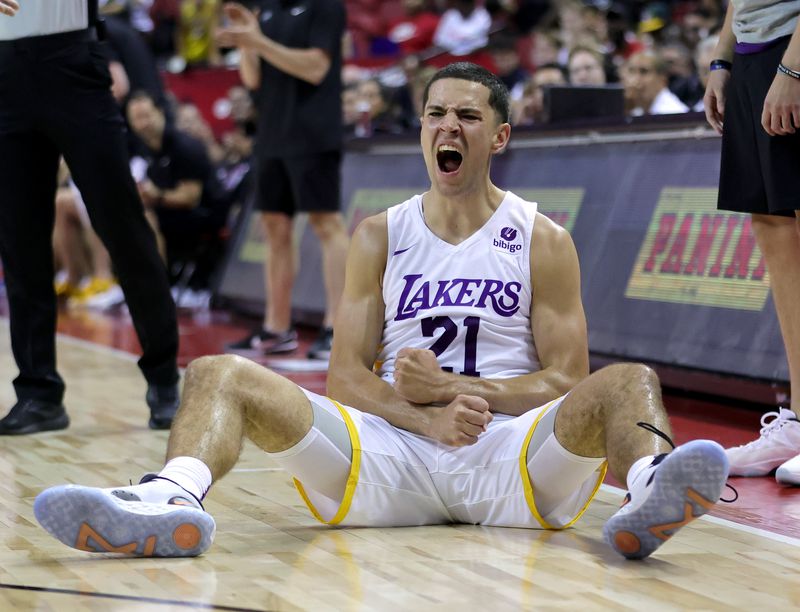 Cole Swider #21 of the Los Angeles Lakers reacts after hitting a 3-pointer and getting a foul call against the Charlotte Hornets during the 2022 NBA Summer League at the Thomas & Mack Center on July 10, 2022 in Las Vegas, Nevada.Getty Images

The former Syracuse forward scored a team-high 16 points to lead the Lakers to a 95-84 win over the Dallas Mavericks in Las Vegas on Saturday night.

It was the fifth and final game in Las Vegas for the Lakers. Swider scored in double-figures in four of the games and wound up averaging 15.4 points per game during the NBA summer league.

Swider’s offense, as it has throughout his run in Vegas, came primarily from the 3-point line. The 6-foot-9 Swider went 4-for-6 on 3-pointers against Dallas.

In the Lakers’ five games, Swider made 50% of his 3-point attempts, connecting on 19 out of 38 shots from beyond the arc.

The Lakers signed Swider to a two-way deal after the NBA’s June draft. He will go to training camp with Los Angeles in the fall. He greatly improved his chances of earning a permanent roster spot with his performances in Las Vegas.
...

Devendorf has a new role with Boeheim's Army. Is he really done playing in TBT? (PS; $; Ditota)

There’s one thing you need to know about Eric Devendorf and Boeheim’s Army this summer.

The former Syracuse basketball star, the face of Boeheim’s Army (and arguably The Basketball Tournament) since the team’s inception, will absolutely, under no circumstances pull on a uniform and play in a game.

Devendorf is fully transitioning from player to coach, one year after he and his Boeheim’s Army teammates won a TBT title and the $1 million check bestowed upon its winner.

That lefty finish in the lane, an enduring, disarming Devendorf staple, is officially retired.

“I still have the fire in my belly,” he said, “but I have to put that energy in a different place, into coaching and giving it to these guys so hopefully it can rub off and they can make things happen.”

Devendorf is 35, the white more competitive now in his ginger beard.

Last summer, his friend Adam Weitsman set about helping Devendorf in particular and Boeheim’s Army as a collective to win TBT. The team had tried and failed to win that elusive winner-take-all prize money six times. Devendorf had decided, back then, that 2021 would be his final year in uniform, his final chance to cash the big check.
...

Five days from now Boeheim’s Army’s 2022 will debut in defense of their 2021 championship in The Basketball Tournament .

Most of the team was at NBT Bank Stadium on Sunday to throw out the first pitch before the Syracuse Mets-Jacksonville Jumbo Shrimp game.

The Army then signed autographs for fans for about a hour on the concourse level of the stadium.

Boeheim’s Army will play its first game – a 7 p.m. matchup July 22 — against the Syracuse region’s No. 8 team, India Rising, in the SRC Arena at Onondaga Community College.
...

What do the top coaches in college basketball think about the recruiting rulebook? This ESPN roundtable, featuring six ACC men's basketball coaches, break down some of the challenges in the recruiting process from the coach's perspective. 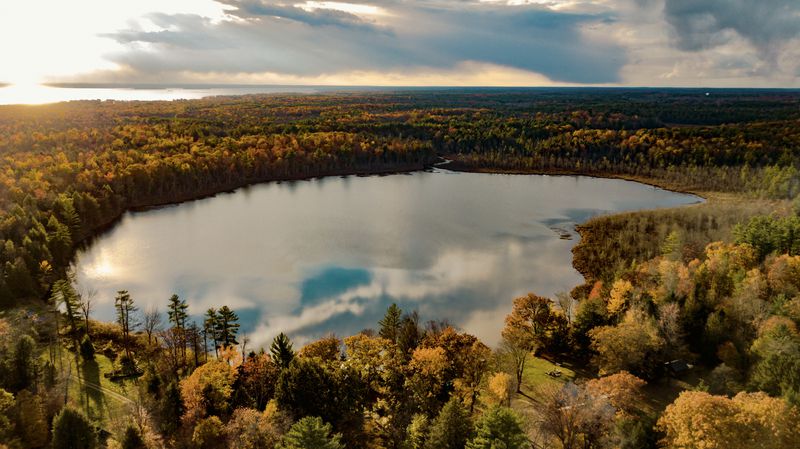 They bought this 850-acre Oswego County retreat for $1.3M, and are renting it to nature-lovers (PS; $; Croyle)

For years the family of Frank Channing Soule, one of the most prominent Syracuse businesspeople of the late 19th and early 20th centuries, found rest and relaxation at Vanderkamp, his 850-acre estate near Cleveland on the north shore Oneida Lake.

And now, thanks to a Syracuse real estate development company, Commonspace, you can too.

The developers bought the massive property that was formerly a religious retreat center for $1.3 million in 2021. They’ve spent about $1 million restoring many of the buildings, and have plans for much more. They just started renting out the property on AirBnB and they’re already booked through the summer.

A common thread winds through the property’s history. The importance of getting back and enjoying the peacefulness of nature with family and friends.

In his obituary in the March 14, 1942 Herald-Journal, the newspaper said that Soule and his wife Grace “derived their greatest pleasure in seeing this property develop into one Central New York’s most beautiful estates.”

Eighty years later, Joe Sisko of Commonspace says that the old-growth forests of Oswego County will once again be a “place to reconnect to what is and who is important to you.”
... 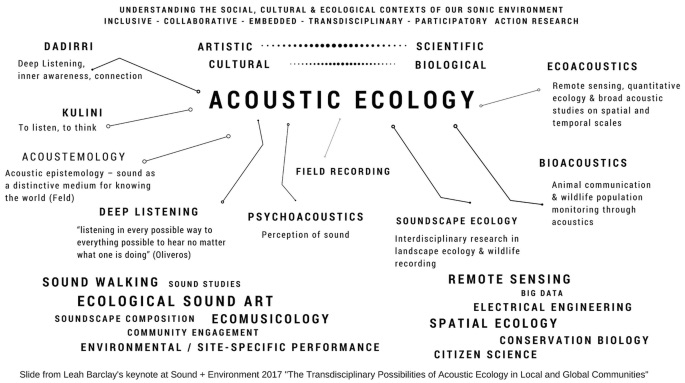