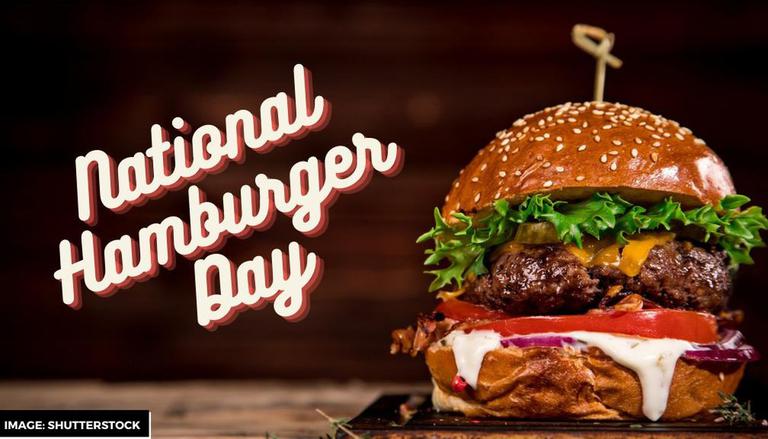 National Hamburger Day takes place twice a year, and there are other burger-related holidays throughout the year as well. Why more than one day for burgers? Is it because they are so good? Well, that may be part of it. Another reason may be there are so many people who claim to have invented the burger. Some sources say that Louis Lassen did it, at Louis' Lunch in New Haven, Connecticut, on July 28, 1900. This is the reason why July 28 is one of the National Hamburger Days. The choosing of December 21 for a day devoted to hamburgers seems to be arbitrary and doesn't appear to be connected to anything in particular. No matter who came up with the hamburger, it was created sometime around the turn of the nineteenth century, and its popularity was boosted at the 1904 World's Fair in St. Louis. Will Jim Boeheim play more man-to-man next season? Will Boeheim use his bench more?

If there’s a question that I’m asked even remotely close to those old standards, it’s got to be about the fullcourt press.

Syracuse fans love the idea of the Orange utilizing the fullcourt press. I get it. It’s fun to watch your team harass the opponent into submission. I think that idea was cemented in 2016 when Syracuse used the press to fuel its second-half comeback against Virginia in the NCAA’s Elite Eight.

So here we are again: Will SU press more next year?

Q: Given that Syracuse will be deeper this coming season, do you anticipate they will press more?

Mike: I do think there’s a strong likelihood that we see Syracuse go back to the fullcourt that we’ve seen Jim Boeheim use in the past – and the potential of more depth is just one reason why I think that.

Last year, Syracuse played its starters 80.2% of the time, according to KenPom.com. That ranked 347th out of 358 Division I teams. Buddy Boeheim, Joe Girard, Cole Swider and Jimmy Boeheim all played more than 34 minutes per game. That team was definitely not pressing much; and wasn’t going to be very effective when it did.

But depth does allow Boeheim a couple of things when it comes to the press. First, if he has depth, it means he can employ the press and not worry as much about tiring a group of starters who are already taxed physically. Secondly, Boeheim can take out a player who is in foul trouble or a player who maybe the weaker defensive player.
...

2023 four-star JP Estrella cancelled his official visit to Duke just a week before his visit to the Hill. Brad Klein brought Sports Illustrated Syracuse's Mike McAllister on to discuss what this means for Syracuse basketball.

One of the top players in the 2023 recruiting class has had a chance in plans. Originally slated to visit Duke this weekend, JP Estrella of Brewster Academy and Middlesex Magic has canceled that trip. The visits to Iowa and Syracuse remain scheduled.

The cancellation of the visit to Duke is significant news, as many considered the Blue Devils the favorite to land the 6-11 center. Both the Hawkeyes and Orange will get their chance to make a pitch to Estrella during upcoming visits. He says he knows exactly what he will be looking for on those trips.

"I'm really looking to see how the players and coaches react," Estrella said. "How the players interact with each other and see the all-around culture of the program."

Estrella added that after the visits have concluded, he plans to go home, reset his mind and discuss his options with family to see if he is ready to make a decision.

Syracuse was the first school to offer Estrella back in August of 2021. Iowa extended its offer a few months later and both schools have prioritized Estrella during the 2023 cycle. Both coaching staffs tracked Estrella during the AAU season, attending the games in which they were allowed by NCAA rules.
...

I published a piece on Tuesday night stating that three Duke predictions for 2023 four-star big man Joseph Estrella were removed from the 247Sports Web site, and I wondered to myself how this might “help” Syracuse basketball.

In all fairness, the 6-foot-11 Estrella holds around 25 offers at this juncture, and some of the main competition for the ‘Cuse includes a handful of strong programs.

Now, as I saw on Tuesday that those Blue Devils projections were no longer present on the 247Sports Web site, that got me thinking as to whether Duke was still heavily involved with this talented power forward/center, and also whether Estrella would still end up taking his planned official visit to the Blue Devils.

Those questions got answered on Wednesday, as On3 national analyst Jamie Shaw reported that Estrella was canceling his official visit to Duke on July 31. Additionally, Shaw reported that the “assumption is that the Blue Devils are no longer in the mix” for Estrella.

Syracuse basketball appears to have a good shot to prevail for Joseph Estrella.

Okay. With Duke potentially out of the picture for Estrella, I think it’s safe to say that this is a positive sign for the Orange’s chances with him.

However, to suggest that Syracuse basketball will end up landing Estrella simply because the Blue Devils may no longer be a factor is a foolish thing to suggest.

What’s more, Estrella has said in recent interviews that suitors such as Kansas and UConn have been recruiting him hard lately.

According to recruiting services, Louisville recently offered him, and the Cardinals are led by head coach Kenny Payne, who is an ace recruiter at the collegiate level.
...

Last week Syracuse announced its final non-conference game of the 2022 season, with Northeastern playing in the JMA Wireless Dome on Nov. 19.

Syracuse went 7-5 in non conference last season after a historical home loss to Colgate in the beginning of the year. With a younger roster, Orange head coach Jim Boeheim appears to want to ease his team into the season as compared to 2021. As we approach 100 days until college hoops is back, here is a preview of Syracuse’s non-conference schedule.

All three of these mid-major programs struggled last season while not making much noise in the offseason.
Contest-Makers: Colgate, Monmouth, Georgetown, Bryant

Most teams within this category have had recent history with Syracuse causing reason to believe in a close contest.
...

Five-star big man Ugonna Kingsley, who received a Syracuse basketball scholarship offer this past February, appears to be ready to make his college choice known in the near future.

Per a report from On3 national analyst Joe Tipton, the 7-foot center plans to reveal his commitment announcement on Monday, August 1. Tipton and others have recently reported that Kingsley is expected to reclassify from the 2023 cycle into the 2022 class.

According to media reports and recruiting services, Kingsley recently has taken official visits to Kentucky, Oklahoma and Oklahoma State. Not surprisingly, numerous analysts are giving the Wildcats a good amount of buzz for Kingsley on various recruiting Web sites.

When I penned this column on Tuesday, at least six predictions had come in for Kentucky in Kingsley’s recruitment between the 247Sports Web site, https://n./content/prospects/2023/ugonna-kingsley-279918 and the On3 Web site.

Syracuse basketball, to be fair, already has several big men in its 2022 class.

Kingsley’s decision to move to the 2022 cycle, at least to me, made it virtually impossible for the Orange to win out here, and I don’t pretend to know if Syracuse basketball was firmly in the mix even before this reclassification for Kingsley.

While the ‘Cuse does have one scholarship available ahead of the 2022-23 campaign, the team also possesses a couple of young big men who are incoming freshmen, along with center Mounir Hima, who transferred in from Duquesne and has three years of eligibility remaining.

Most recently, Kingsley attended the powerhouse Putnam Science Academy in Putnam, Conn., and on the AAU circuit, he is affiliated with the Team New England Basketball Club as well as the NY Jayhawks in the Adidas-sponsored league.
...

ESPN announced its early-season tournament schedule for the 2022-23 college basketball season early this week -- a slate that highlights some of the game's top programs and elite players, and builds on the 2021-22 campaign, which ended with four powerhouses in the Final Four: Kansas, North Carolina, Duke and Villanova. Here is our handy guide to the men's games that will all appear on the ESPN family of networks in those seven events.
...
...

Team to beat: Saint Mary's got a boost in April when Logan Johnson (11.9 PPG) announced that he would return for a fifth year, after leading the program to the second round of the NCAA tournament. Yes, the Gaels lost Tommy Kuhse and other standouts, but Randy Bennett's track record suggests that the team will be competitive in the West Coast Conference again.

Sleeper team: Mike Hopkins has not accrued the momentum many had anticipated when he arrived at Washington, following his role as a Syracuse assistant, but transfers Keion Brooks Jr., (Kentucky) and Noah Williams (Washington State) hope to give the Huskies a chance to be competitive this season.

Player to watch: Brooks struggled to find his way at Kentucky, where he averaged 10.8 PPG last season. A fresh start in Seattle could help him showcase his potential.

Something for the college hoops junkies: Since the 2007-08 campaign, Randy Bennett's Saint Mary's squads have finished with at least 25 wins 11 times.
... 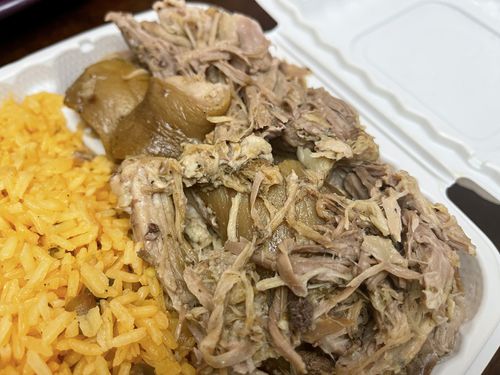 Mashed plantains, pork skin, garlic and olive oil doesn’t sound like much, but in the mofongo from Don Juan Cafe Restaurant in Syracuse, it was a lively component.

A hearty scoop of the traditional Puerto Rican dish swam in cooking liquid from the braised chicken accompanying it. On its own, the mofongo was starchy with the barest hint of sweetness and banana flavor of the plantains, as pork fat and garlic dominated. Sitting in the sauce of the roasted chicken during the 10-minute car ride home permitted it to absorb flavors of tomato, onion and bell pepper, carrying it to the far edges of the dish.

It reminded my wife, who is of Italian and Tyrolean descent, of polenta. Made from cornmeal, it is prepared and consumed similarly, as an accompaniment to a protein or as main dish. In addition to roasted chicken ($10.20), it can be paired with fried pork ($11.75) or on its own ($7.20).
...