Lammas, which takes its name from "loaf-mass," is the first harvest festival of the year, and celebrates the first wheat harvest. Other grains are also harvested around the time of Lammas, such as oats, rye, and barley, as are plants such as mint, meadowsweet, sunflower, and Calendula. Lammas is celebrated in some English-speaking countries in the Northern Hemisphere, such as Scotland, Wales, England, and Northern Ireland.

On the day, Lammas bread has traditionally been made from the new wheat crop, often being baked into shapes such as wheat, owls, or other figures. It was customary to bring a loaf to church where it would be blessed. In Anglo-Saxon England, it was then sometimes broken into four pieces and put at the four corners of barns, to protect the recently harvested grain inside. The day has also traditionally been marked by making corn dollies, and Lammas charms such as sprigs of mint, green Lammas ribbons, and twigs that are bundled together, called besom. Feasts have also been common on the day.


Syracuse Basketball's 2023 Recruitment is Heating Up​

It’s the start of August, and we’ve got plenty of Syracuse news from the recruiting world.

Starting with basketball, Syracuse extended an offer to 2023 point guard Mike Williams from Calvert (MD) Hall College. The four-star point guard is ranked 134th in his class, and holds offers from Clemson, LSU, Maryland, Houston, Illinois and DePaul, among others.

Syracuse has been long pursuing 2023 shooting guard Reid Ducharme, and he caught up with 247 Sports’ Dushawn London about his top three schools. The Wolfeboro (NH) Brewster Academy four-star prospect said the three schools recruiting him hardest are Syracuse, Xavier and Penn State. “Jim Boeheim has been a legendary coach for so long and (Gerry McNamara) as well. They’ve been showing me a lot of love and to be able to be apart of that legacy would be awesome.” He’s rated four-stars by 247 Sports, and is ranked 97th in his class, though his star seems on the rise after an eye-opening Peach Jam performance.
There’s been significant movement in the JP Estrella sweepstakes in the past week. The Brewster (NH) Academy four-star center, ranked 54th in the class of 2023, was initially though to be a Duke lean, with 247 Sports having several predicted Crystal Balls in the Blue Devils favor. But Duke appears to have placed more focus recently on 2023 forwards TJ Power and Andrej Stojakovic (son of former NBA star Peja Stojakovic) and all of the initial Crystal Ball predictions have since been removed.
…

Carter Bainbridge and Cam Ezeir are back on this week’s Fizz Five to discuss men’s basketball recruiting, Sean Tucker’s chances for 2022 awards, and football’s conditions for success.

Tyler Betsey, a talented 2024 shooting guard/small forward who was offered a scholarship by the Syracuse basketball coaching staff earlier in July, was all kinds of awesome in grassroots basketball when Nike’s EYBL circuit recently wrapped up its summer session.

In fact, national analyst Travis Graf wrote in part in a recent piece, “Betsey made a strong case for being one of the top shooters in the rising junior class. He shot 19 for 42 from the outside, good enough for 45.2 percent.”

With the contact period opening up in mid-June, college coaches have been able to directly reach out to 2024 prospects, and undeniably Betsey’s recruitment is going to heat up.

According to recruiting services and Betsey’s own Twitter page, he already has accumulated at least 20 offers, with some of the more recent ones coming from teams such as Pittsburgh, Rutgers, Nebraska, and West Virginia.


Syracuse basketball recently got into the mix for soaring wing Tyler Betsey.​

On the AAU tour, Betsey competes for the New York City-based NY Renaissance. He was a stand-out for Windsor High School in Windsor, Conn., as a sophomore and will play as a junior for the St. Thomas More School in Oakdale, Conn., in the upcoming 2022-23 term.
…

Several Syracuse basketball recruiting targets in the 2023 and 2024 classes have received praise from experts for their recent performances in grassroots basketball.

As part of Peach Jam awards doled out by analysts and scouts on theseasonticket.com, Team Takeover’s Darren Harris was named to the All-Underclassman squad.

The 6-foot-6 Harris is a 2024 four-star small forward who attends St. Paul VI Catholic High School in Chantilly, Va. Per media reports, the Orange appeared to have reached out to Harris once the contact period for 2024 prospects opened up on June 15.
… 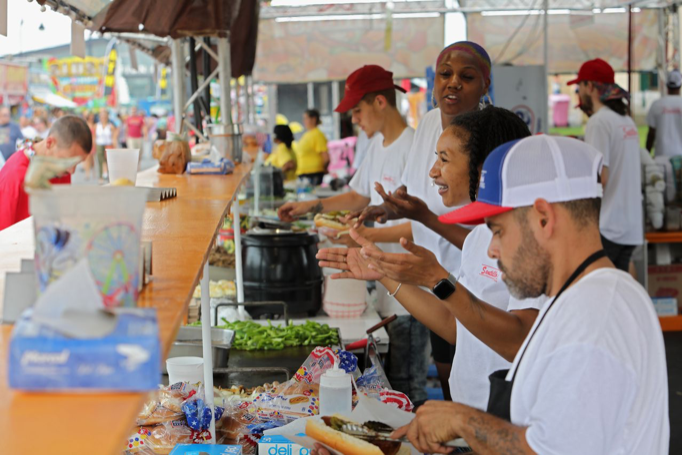 In the six years since Mike Sharlow launched Syracha’cuse, a line of local hot sauces, he’s pitched his products at lots of festivals, shows and events, including a few held at the New York State Fairgrounds.

But until this year, he’s never had a stand during the run of the State Fair itself.

“I’m excited to be at the fair because it’s a great opportunity to get some exposure,” he said. “If you have one person that discovers you today who didn’t know you yesterday, that’s a win.”

Syracha’cuse will be one of at least 15 food vendors making their State Fair debut this year. At the request of syracuse.com, State Fair officials have released a preliminary list showing a little more than 100 food vendors signed up for this year (see below), with more contracts still being negotiated. The fair runs Aug. 25 to Sept. 5.
…