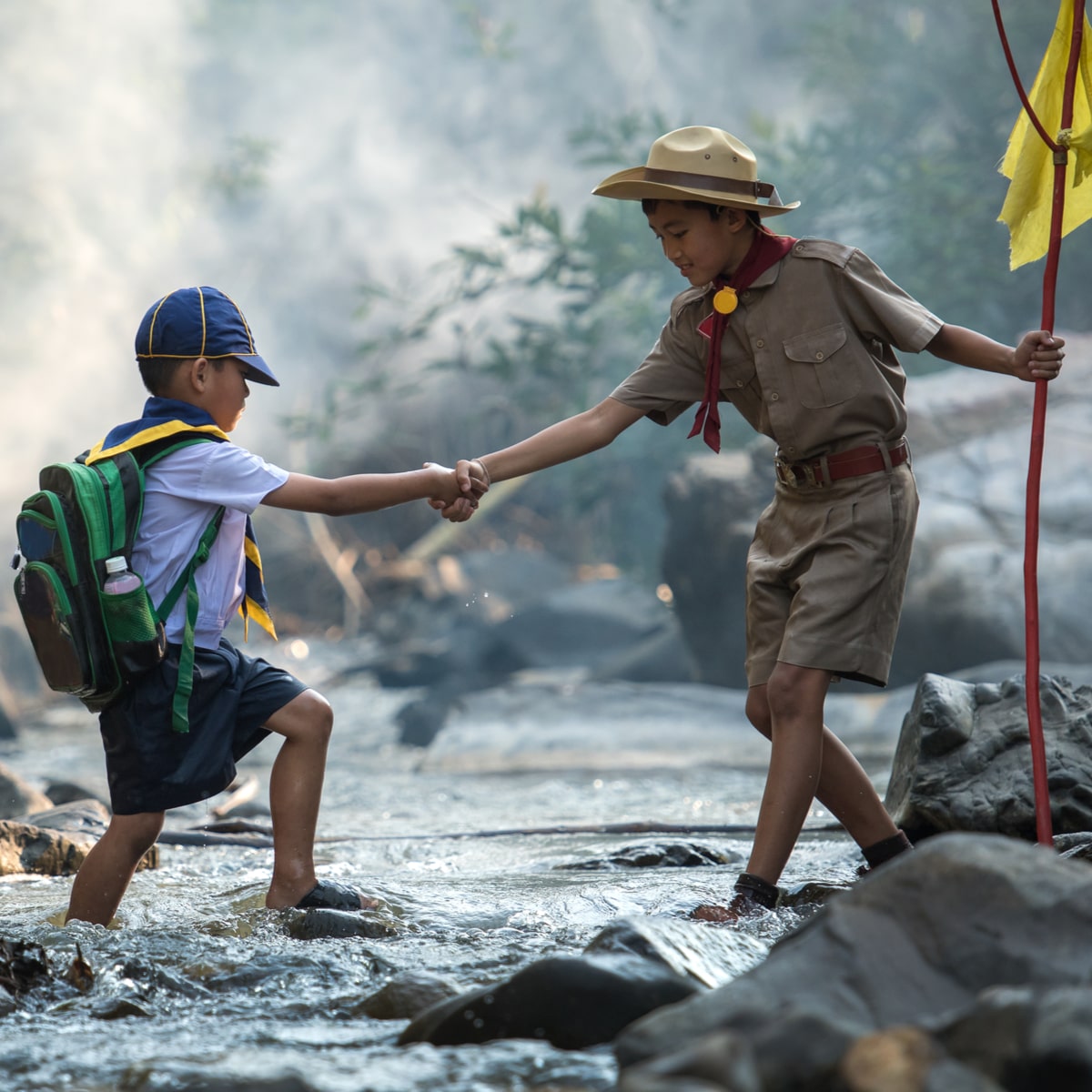 Welcome to Be an Angel Day!

Angels are thought of as being supernatural spirits or beings that can protect humans. On Be an Angel Day, humans play the role of protector or helper for fellow humans. The day was founded by Reverend Jayne Howard Feldman as a day to do small acts of service for someone and be a blessing in their life. It is a day to selflessly do random acts of kindness and to help others in need.

How to Observe Be an Angel Day

Celebrate the day by doing random acts of kindness and helping others in need without expecting anything in return. You could perhaps help others anonymously, so they really think they are being helped by an angel. There are many things you could do to be like an angel. You could mow someone's lawn, you could pay it forward at a restaurant or coffee shop, you could talk to someone who is sitting alone, you could volunteer at a charity organization, or you could do something else that brightens someone's day. In past years, this question would not be as fun to answer because of the size of Syracuse’s recruiting classes. Last season, Benny Williams was the answer to every superlative about the freshman class in 2021 because he was the only freshman. But, now with six guys in the fold competing for playing time, there is plenty of love to go around.

We’ve spent a lot of time at The Fizz breaking down what each player’s role will be this season. Which of them are going to start, are any going to redshirt, who fits in the most with the current roster and the upperclassman, etc. Judah Mintz, Chris Bunch, and Justin Taylor have been the primary factors of these discussions, simply because of where they’re rated, and the positions they play.

The Orange have a clear need for scoring on the wing after the departures of Buddy Boeheim, Cole Swider, and Jimmy Boeheim. That’s nearly 47 points per game that SU is losing from their perimeter players. Jim Boeheim returns Joe Girard III, who averaged almost 14 points per game, but the need for scoring and offensive production is clear. That’s why those three are getting the most hullabaloo about potential playing time and maybe being in the starting lineup.

But, offense is not everything. Syracuse’s offense was elite last season. The reason the Orange were able to finish 69th in kenpom.com’s rankings at the end of the season is that they finished 15th in adjusted offensive efficiency. That is terrific, and a testament to the three departures, Girard, and Jesse Edwards who also average double-figures before he went down with a season-ending wrist injury in February.

A season ago, Syracuse basketball senior shooting guard Buddy Boeheim led the conference in scoring and landed on the All-ACC first squad.

Edwards, who unfortunately got injured this past February and missed a handful of games in 2021-22, had a realistic chance to capture this honor before his stanza was cut short.

As we look ahead to the 2022-23 season, which gets underway this coming November, I believe there are numerous ‘Cuse guys who could make a run at the All-ACC teams and other conference awards.

Let’s look at Syracuse basketball players who can make runs at ACC honors.

The league’s top honor is the ACC Player of the Year. Removing my Orange-colored glasses, I’m not sure any Syracuse basketball guys are going to significantly contend for this award.

Then again, the games are played on the court, so we’ll see how the 2022-23 term shakes out for the ‘Cuse. If I had to venture a guess, the top-two Orange candidates for ACC Player of the Year would probably be Edwards, who is a senior, along with fellow senior Joe Girard III, a guard.
...

The last article about Symir Torrence should’ve answered the necessary questions about one of SU’s most experienced players. There is a stark difference with this one though. As much as Torrence, and even the expectations on Joe Girard and Jesse Edwards, are extremely high, none compare to Syracuse’s 2021 golden boy Benny Williams.

The forward skyrocketed up the rankings to close out his high school tenure, ranking in the top 30 of the class of ‘21 among most basketball recruiting outlets. Williams entered SU’s program as the highest ranked recruit in a long while. This naturally created gaudy expectations for the former five-star. Unfortunately for Syracuse, he did not deliver or at least looked quite uncomfortable during the brief minutes he received throughout the year. It is worth noting that last year’s lone freshman played under eight minutes per game so opportunities were sparse in the first place.

But that should change this season with his sophomore status.

Williams was known as a great slasher to the rim and a quick decision maker fresh out of high school. He also started close to every game and was a mainstay on whichever team rostered the high school stud. With all this success comes preconceived notions of how one should play at the next level, which is totally understandable. Syracuse fans thought the next coming of Malchi Richardson was walking through the door. A player who both met and exceeded expectations during his rookie year in 2015, landing on the All-ACC Freshman Team. But instead, Jim Boeheim rarely trusted his new shiny five star and rather deferred to more experienced and game-ready players.
...

One of the most fiercely debated topics among Syracuse basketball fans whom I interact with on social media and in chat rooms centers on the Orange’s defense.

For quite some time now, ‘Cuse head coach Jim Boeheim has relied exclusively on the zone, whether it’s a 2-3 scheme or some other version.

And that zone, when it employs athletic, instinctive and lengthy players, can be ultra-dangerous. The Syracuse basketball zone, for example, in 2013, 2016 and 2018, to me, was stellar.

In March Madness, said zone is a huge advantage for the ‘Cuse when it is playing opponents that don’t have a lot of time to prepare for it, and also haven’t seen a lot of zone throughout their regular seasons.

Of course, if the zone doesn’t have the characteristics I described above, it can be a massive detriment to the team. We can look no further than a stanza ago, when the Orange’s zone was awful, and the squad finished at 16-17 overall.

Could Syracuse basketball use some man-to-man defense in the 2022-23 term?

To be fair, in 2021-22, the ‘Cuse could really light up the scoreboard on offense. Yet the roster wasn’t all that athletic, and foes would often shred the zone.
...

On Saturday morning, an expert logged a prediction that skyrocketing 2023 four-star big man Joseph Estrella will end up wearing orange in college, but it’s not the Syracuse basketball brand of Orange for which ‘Cuse fans are hoping.

The 6-foot-11 power forward/center, who plans to unveil his commitment choice in early September, has more than two-dozen scholarship offers from a range of high-major programs.

However, the chatter from national recruiting analysts and other insiders is that Joseph Estrella will almost certainly pick one of the schools that he officially visited in recent months.

Those four college squads are Syracuse basketball, Iowa, Tennessee and Marquette. While I’m not in Estrella’s inner circle, I’d be really surprised if he announced a commitment to a suitor beyond the four I just mentioned.

At the beginning of August, David Eickholt logged a projection in the direction of Iowa in Estrella’s recruitment, assigning his prediction a medium confidence level. Eickholt is an Iowa Hawkeyes insider for 247Sports.
... Note: This is the second of a five-part untold story of NBA standout Larry Costello, who was born and raised in Central New York and became a hall of famer.

When Larry Costello chose Niagara University, it was a glamorous basketball destination. During the 1950s, six Niagara graduates played in the NBA.

The Little Three of Niagara, Canisius and St. Bonaventure spent weekends in New York playing for overflow crowds at Madison Square Garden. Because there were no college conferences, teams from across the country competed in Chicago, Buffalo, New York, Philadelphia and Louisville, said Hubie Brown, the longtime NBA analyst and Costello’s Niagara teammate.
... How a Syracuse institution diversified its management – and what that can teach us (PS; $; Coin)

The YMCA of Central New York has pulled off a feat that businesses and nonprofits around the country are struggling to do: Create a diverse leadership team that looks like the people they serve.

In the past few years, the Y has zeroed in on bringing people of color, women and those with disabilities into top positions. The chief executive officer is a Black man; the top money raiser is a Black woman. Of the dozen top leaders, seven are women, five are Black. One has a disability.

The volunteer board of directors, once nearly all white, has expanded and diversified, too. Four years ago, the board had just two people of color. Today there are 13. In 2018, six board members were women. Now, there are 15.

“Our goal is that our staff is representing the community in which we serve, because we need everyone to feel welcomed when they walk through our doors,” said Erin Clare Grayson, the Y’s chief talent officer, who is white and identifies as someone with a disability. “It is not checking the box. It is about creating a culture where inclusion and equity is what’s really important and is a part of what we do on a daily basis.”
...

Be an Angel Day​