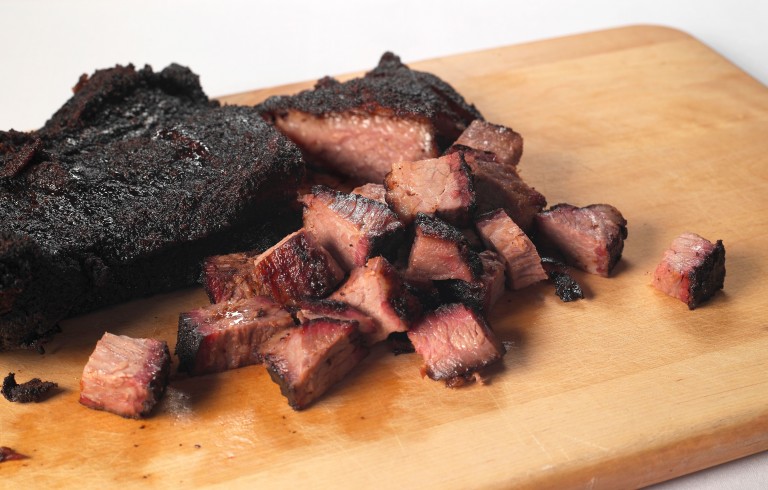 Once considered trimmings or left-overs, burnt ends come from the point of a brisket. However, these days burnt ends take center stage in a BBQ basket of smoky flavor and goodness.

The name comes from the longer cooking time required for tender brisket. As a result, these thinner points become a little charred and tougher than the rest of the meat.

Don’t let that description deter you, though. As a tradition in the Kansas City area, they’ve mastered burnt ends and a taste for them has spread across the country. About Boeheim's coaching record: Has the NCAA ever restored vacated wins? (PS; $; Waters)

We’re trying to be timely and relevant in this week’s Mike’s Mailbox.

Our first two questions are based on recent events – a column from my Syracuse.com colleague Brent Axe in which he interviewed SEC commissioner Greg Sankey and Syracuse’s Elite Camp, which was held this past weekend. Plus we have two more suggestions on lineups and scheduling.

Q: Brent Axe’s article quoting a conversation he had with SEC commissioner Greg Sankey about Jim Boeheim’s vacated wins got me thinking. When, if ever, has the NCAA restored to a school vacated wins in any sport?

Mike: It has never sat well with Syracuse fans that the NCAA included vacating 101 wins in its sanctions after concluding its investigation into the men’s basketball program in 2015.

Greg Sankey, the SEC’s commissioner, was a member of the Committee on Infractions that ruled on the Syracuse case.

I did some research and also checked with the NCAA and, to my knowledge, I don’t know of a time when the NCAA restored either wins or a championship in a case involving the Committee on Infractions.

The only occasion I could find of a penalty that included vacated wins being reversed was the Penn State football situation. The NCAA did restore Joe Paterno’s wins, however that was not a Committee on Infractions decision. That penalty was an executive action and, as the case involved crimes versus NCAA violations, was later ruled to be outside the NCAA’s authority.

So while Jim Boeheim’s career record is 1,099-426 in the minds of most Syracuse fans, I would expect the NCAA record book will continue to credit him with 101 fewer wins.
...

With long-time Syracuse basketball recruiting target Joseph Estrella, a 2023 four-star big man, expected to pick Tennessee on September 2, Orange coaches are moving quickly to get into the mix for other big men in the high-school senior class.

Just in recent days, the ‘Cuse coaching staff has offered at least two other 2023 big men, four-star Drew Fielder and William Patterson, according to their Twitter accounts.

The 6-foot-9 Fielder, a power forward/center, plays prep-school and AAU ball on the west coast. His stock blew up this spring and summer as he played at a strong level in grassroots basketball.

He is high-school teammates with a priority target for the ‘Cuse in 2023, four-star
Mike Williams, who plans to officially visit the Hill in mid-September.
...

One of the standout big men from Syracuse Elite camp, William Patterson recently received an offer from Syracuse after the camp concluded. The 7-foot-2 center is still developing but showed he is a rim protector, has good mobility and is a strong finisher around the rim. Patterson is an high upside big who’s best basketball is a head of him.

“Everything I’ve seen so far at Syracuse has been pretty amazing and exciting,” he said. “Just being around the staff is very exciting because I’m starting to build a relationship with them. Everything is going to weigh itself out.”

While Patterson is coming off an offer from Syracuse, he is also being recruited by Oklahoma State, Rutgers, Bryant, Central Florida, Miami and TCU.

Patterson has taken visits to Syracuse, Fordham and will potentially visit TCU in the future.

When it comes to TCU, that relationship is still building as a visit may come up in the future:

“I’m starting to build more with TCU. The head coach and I text often we just got to keep it up. I notice with them that they’re a fast paced team that likes to get the ball up the court and share the ball.”

As of right now, Patterson has a timeline in mind for a decision.

“I’m still undecided but I’ll make my decision the middle of my senior year and cut a list before that,” he said. “I’m l looking for a school that’s willing to work with me. I need gym time, weight room time, recovery, help in school and all that. Not just basketball but everything.”
...

On the first day of his Introduction to American Politics class, Chris Faricy imparts a message to his students that will serve as a guide for the semester.

Faricy, associate professor of political science at the Maxwell School of Citizenship and Public Affairs, takes a similar approach in his own scholarly work: he examines how, when and for whom American democracy works. His forthcoming book will examine whether the creation of new social and economic benefits for citizens will revitalize public trust in the federal government and democracy.

For his teaching and subject area expertise, Faricy has been selected to hold a new professorship created in hopes of advancing civil discourse and mutual understanding in today’s polarized political climate. Syracuse University basketball legend George Hicker ’68 and his wife, Kathy, have created the Hicker Family Professorship in Renewing Democratic Community.

Combined with funds pledged by the University in support of the Forever Orange Faculty Excellence Program, the endowment totals $2 million. Launched in early 2022, the program strives to advance academic excellence by generating the resources needed to recruit and retain diverse and talented faculty in a highly competitive academic landscape.
...

A reminder that the ACC is not just a power conference football:

According to this, nine of the top 50 38 brands are in the ACC, including the top two:

Even when these teams are down (ahem, "Pitt"), they are still big brands.
...

Wednesday was a promising start to the homestretch. The ticket-takers felt it. The food vendors felt it. The hot-tub sellers felt it. Even Patti LaBelle, the Godmother of Soul, felt it during what very well might be the final rain of the New York State Fair. “Let it stop raining!” she ordered.

The energy here seemed to build as 78,010 roamed the grounds on the last day of August. “Is it always like this?” asked Cinder Barbecue’s Taraile Stinnett, a first-time vendor here who was seeing unusually long lines Wednesday. “If tomorrow is like today, we’ll be putting on 20 briskets on Friday just to keep up.”

Fire up your smoker, Taraile. The forecast for Labor Day weekend is, like Wednesday, hit or miss. It won’t be oppressively hot like Monday, and we won’t seek shelter from a monsoon like Tuesday. Whatever the skies bring us, we should be able to ride rides, play games and eat food that we won’t be able to eat come Tuesday.

I write about food for syracuse.com and The Post-Standard, I rely on readers to tell me what’s good in Central New York. That’s exactly what I’ve been counting on during the State Fair. I’m taking your suggestions and highlighting the best food and drinks here. If you find something that makes your belly smile, text me (315-382-1984) and I’ll give it a shot. I might even join you for a meal or drink and pick up the tab. As Bluto from “Animal House” said: “Grab a brew. Don’t cost nothin’.” I’m working my way through a decent-sized list, and a few readers have taken me up on that offer.

Lunch: After eating way too much over-the-top food for the past eight days, I pulled the throttle back and ordered a salad for lunch.

Oh, stop. Don’t look at me like that. It’s a salad at the State Fair. I know where to go to get a salad that’s not really a salad.

Stephen’s Greek Cuisine in the Eatery Building serves one of the best breakfasts on the fairgrounds, and owner Stephen Nicolaos has been making one of the best gyros this side of Chevy Court for 38 years. He also makes a damn good salad.
...