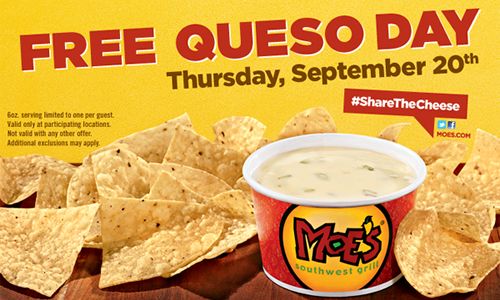 Salsa and chips are always free at Moe's Southwest Grill, but queso—or "liquid gold," as they call it—is also free today. Why? Because it's Free Queso Day! Each year on the day, Moe's gives out a free six-ounce cup of their queso as a way to thank their loyal customers. In past years, the restaurant—which is a fast-casual franchise that serves southwestern food in around 700 locations—has held contests giving those who enter the opportunity to win free queso for life. (Well, at least one free cup a week for 24 years.) In 2019, the day was expanded to "Queso Season," and queso was celebrated all of September. Not only was free queso available in-store, but also by using the Moe Rewards app, online ordering, and catering. Moe Rewards members also got an extra 100 bonus points for every purchase of queso they made during the month.

Syracuse basketball coaches offered a scholarship to fast-rising 2023 big man Drew Fielder at the end of August, and these days the Orange is among the suitors recruiting the top-100 player the hardest, according to media reports.

Just in the last couple of days, the fall recruiting period opened up, allowing college coaches the opportunity to visit with priority recruits in off-campus settings.

Recruiting guru and Stockrisers.com founder Jake Weingarten noted in a recent tweet that the Syracuse basketball coaching staff was among the teams that have already visited the 6-foot-9 Fielder at his prep school on the west coast.

The talented power forward/center, an Idaho native, is a senior at the Southern California Academy in Northridge, Calif. Fielder received a lot of high praise from national analysts and scouts for his play in recent months as a member of the Los Angeles-based West Coast Elite in the Under Armour Association league.

Without question, it’s an encouraging sign that Fielder will travel to Central New York. That being said, he holds nearly 30 scholarship offers, according to recruiting services, and has a wide range of impressive suitors.

Kelly wrote in his piece that, at present, Fielder is hearing from squads such as the ‘Cuse, USC, Providence, Iowa, TCU, Nebraska, Boise State and Miami.

Syracuse basketball coaches are busy doling out scholarship offers to, and showing interest in, a range of 2024 high-school prospects.

One such player is four-star forward Jadyn Harris, who is from the talent-rich Baltimore and Washington, D.C., corridor. As we previously noted, when the contact period for this class opened up on June 15, the ‘Cuse reached out to the 6-foot-6 Harris, per Stockrisers.com founder Jake Weingarten.

More recently, Weingarten said in a tweet that numerous teams, including Syracuse basketball, are expected to visit Harris in the coming weeks, as the fall recruiting period has begun.

Old Dominion and Penn State have offered 2024 prospect Jadyn Harris a scholarship, he told @Stockrisers. Ohio State, Syracuse, Georgetown, Vanderbilt, Maryland, are expected to go see him over the next few weeks as well.
This is a name to keep tabs on.
— Jake (@jakeweingarten) September 10, 2022
Expand...

GREENSBORO, N.C. (theACC.com) – The Atlantic Coast Conference today announced its 2022-23 men’s basketball conference schedule. Comprised of 150 games, the ACC’s regular-season conference slate opens Dec. 2 and finishes March 4.
“We are thrilled to announce this year’s ACC men’s basketball schedule as there is tremendous anticipation surrounding the upcoming season,” said ACC Commissioner Jim Phillips, Ph.D. “The schedule will once again feature incredibly competitive games and we look forward to watching our amazing student-athletes and programs compete for championships. There’s never a shortage of excitement when it comes to ACC basketball – especially after another incredible postseason that our league enjoyed last year – and we appreciate our television partners making every game accessible to our fans.”
For the fourth straight season, ACC play consists of a 20-game schedule for each program. Teams will play their two primary rivals both home and away (four games) and four repeat opponents both home and away (eight games). The remaining eight opponents will be single games, with four at home and four on the road.

The conference schedule tips off the weekend of Dec. 2-4 with a full slate of seven games.

The 2023 New York Life ACC Men’s Basketball Tournament is slated for March 7-11 at Greensboro Coliseum in Greensboro, North Carolina. The event returns to Greensboro for a record 29th time.

Game times and television designations for both non-conference and conference games will be announced when available. Matchups for the 2022 ACC/Big Ten Challenge were previously announced.

The ACC’s current 15 member schools have captured three of the last seven NCAA Championships, with 92 NCAA Tournament wins in that seven-year span. Current ACC schools have won eight NCAA titles in the last 21 years and own 17 national championships overall. Current ACC member schools have combined for 66 Men’s Final Four appearances and a national-best 657 NCAA Tournament wins.
The ACC posted a 14-5 record (.737) in the 2022 NCAA Tournament – the most wins and best winning percentage of any multi-bid conference – and has the highest all-time NCAA Tournament winning percentage of any league (.619).
All 15 league members own 1,000 or more all-time wins, including eight schools with 1,500 or more victories. Four of the top eight and six of the top 30 winningest programs in NCAA Division I basketball history currently reside in the ACC.

I hope you enjoyed the Classic Football Games, but the ACC is also very good at another sport...

Here are a couple of classic hoops games from the ACCDN archives...

Florida State vs. Duke: FSU made their first trip to the ACC Tournament Championship Game since they joined the conference in 1992, but they lost the title game to the Duke Blue Devils, 79-69. Jon Scheyer scored a game high 29 points and was named tournament MVP. Gerald Henderson scored 27 points, dished out four assists, and grabbed two rebounds. For Florida State, Tony Douglas led the Seminoles with 28 points.
...


The ACC does try to protect its basketball brands, although I don't think they are going overboard with it (Yellow Jacket fans may disagree!). Every team except Virginia has at least one game during the student school break, and no team has more than three games (and eight teams have just one). Should the ACC have taken one away from GT and given it to UVa? Probably - but I will say this: if anybody can fill an arena during Xmas and New Year's, it's the schools in the biggest cities.
... 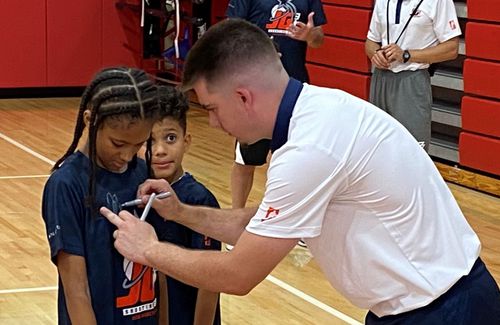 Girard’s NIL deals: How much he’s making; how those deals get done (PS; Ditota)

The Syracuse University guard held a basketball camp that bore his name in his native Glens Falls. About 70 boys and girls attended the JG3 Shooting Stars sessions at Glens Falls High School, where Girard wandered between basketball skills stations to observe and demonstrate, put on a clinic of shooting and ballhandling brilliance for mesmerized kids, then signed a slew of autographs. The $50 registration fee included a stylish tech T-shirt.

A few days later, he and his dad stopped by the Novus headquarters in Latham. There, they worked with Dan Jason, the company’s director of operations, to “curate design options” and choose gear Girard would ultimately add to the JG3 Collection. Fans could already buy various JG3 branded shirts and hoodies; this season, Girard will add a beanie and three different colorblock hoodie options. All will bear his trademark #BeDifferent slogan.

Those August transactions were available to Girard because he and every other college athlete can now profit from their name, image and likeness (NIL). Girard, whose social media following sprung from his extraordinary high school success in basketball and football, was positioned to take advantage of NIL once it became operational last summer.

In July 2021, his parents put together an LLC called JG3 Enterprises to handle all of Girard’s NIL deals. His mom, Arlene, works at a bank and set up a checking account for that business. His dad, Joe Jr., investigates companies seeking deals, handles the contracts and explains to JG3 what those companies require of him.
... 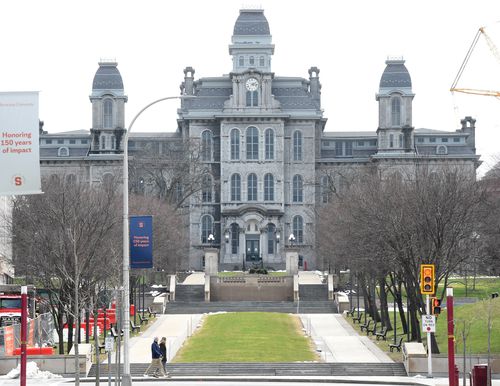 University Ave looking toward the Hall of Languages, which normally would be busy at lunchtime. March 25, 2020. Syracuse University directed students and employees to stay home because of the coronavirus outbreak.

Syracuse University is expanding a program that aims to help school employees buy homes in the city, part of an effort to help them live closer to campus and bring more homeowners and owner-occupied houses to the areas south and west of the campus.

The guaranteed mortgage program, run through Solvay Bank, is open to all full-time and part-time professors and staff members.

It will allow Syracuse employees to finance up to 100 percent of the price of the home and receive the bank’s best interest rate.

Participants will also have the option to receive a forgivable home improvement loan valued at 10 percent of the purchase price (up to $15,000), potentially helping improve older homes or turn rental properties into owner-occupied houses.

“We want to help our neighbors and our neighborhoods,” said Cydney Johnson, the school’s Vice President of Community Engagement and Government Relations, . “How do we help people buy a home in areas where the home stock isn’t new build or it was multi-family and someone wants to be the owner occupant? It helps to add to the blend and balance in a neighborhood adjacent to the university so it’s not all rentals.”

The program covers one-family, two-family, townhomes and condominiums. Purchasers must live in the homes to access the programs. 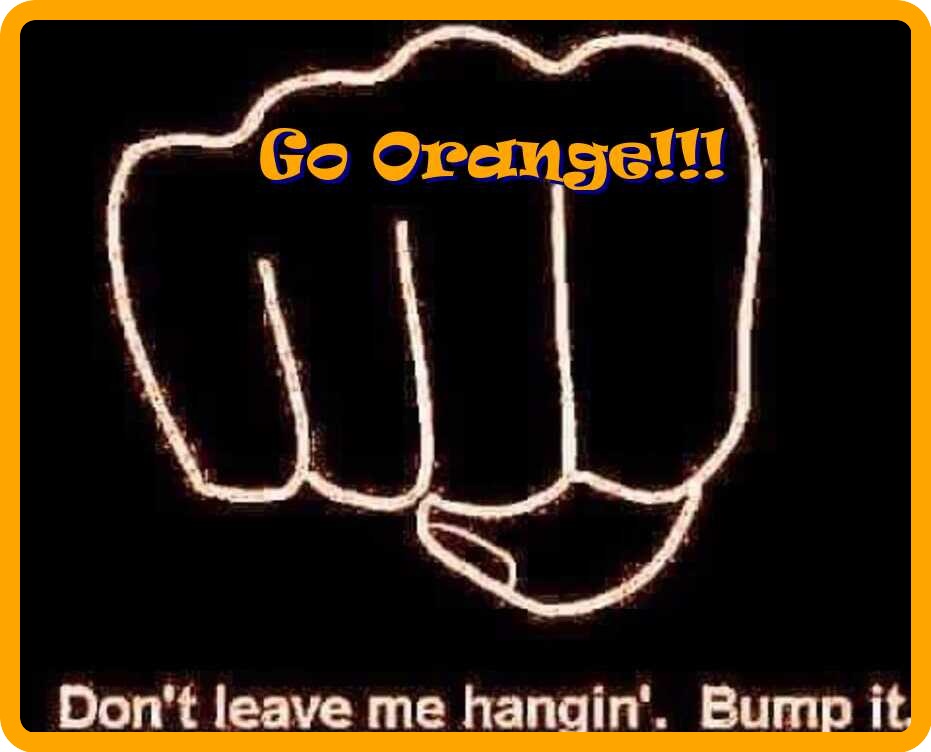