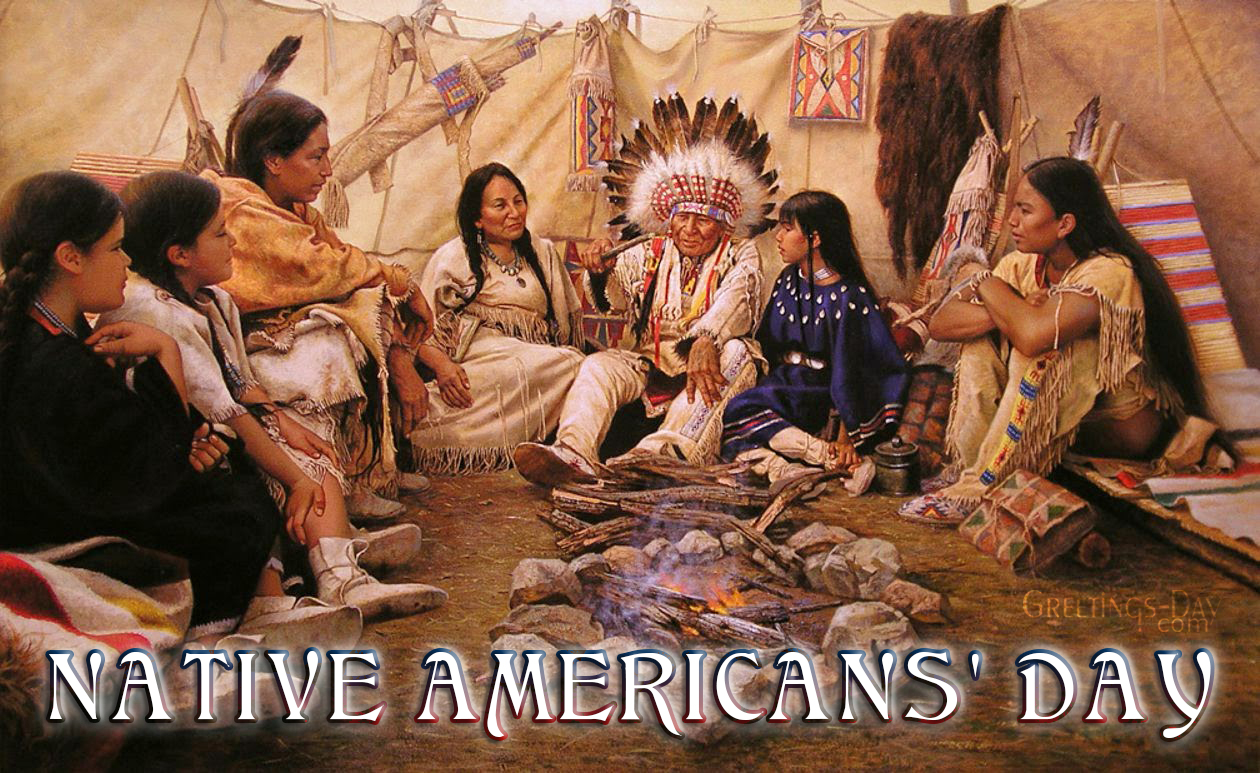 U.S. Native American Day is celebrated on the fourth Friday of September every year, falling on September 23 this year, as a way of honoring those who have been a part of the American tradition even before the nation of the U.S.A. came into being.

As Josh Reavis and Ryan Schmitt from GoHeels Productions worked around Pete Nance to set up all the camera angles and lighting that would make one of his first Tar Heel interviews look good, the newest Tar Heel graduate transfer was asked if this felt familiar.

Nance was, after all, a radio and television major at Northwestern, a school with a renowned media school. He proceeded to rattle off multiple tricks only a savvy interview subject would know, and then he grinned.

Indeed he has, which is precisely what makes him so valuable to the 2022-23 Tar Heels. Nance isn't an unproven freshman who will need to adjust to college basketball. He's an honorable mention All-Big Ten selection who started every game for the Wildcats over the last two years and averaged 14.6 points per game as a senior. In that last year in Evanston, he notched a pair of double-doubles against Maryland, including a 28-point, 14-rebound monster performance, scored 20 against Ohio State, and put up 21 points against Illinois.

Yes, he's done this before.

Despite the gaudy statistics, though, what he hasn't done is play in an NCAA Tournament game. After leaving Northwestern, he went through the NBA Draft preparation process before deciding to return to college for one more year. When picking his new home, the opportunity to play in the postseason was an important consideration.
...

In the past few weeks, two separate collectives and Adam Weitsman have made public their intention to support athletes hoping to monetize their names, images and likenesses (NIL).

The 315 Foundation and Athletes Who Care operate independently of Syracuse University. The Syracuse-centric collectives pool money from individual donors and then broker deals for SU athletes.

Weitsman, SU’s most visible booster, can now do things in the NIL space previously banned by the NCAA.

What’s permissible within NIL keeps evolving, but two NCAA rules remain clear: Pay-for-play and recruiting inducements are prohibited. Athletes cannot be compensated for their performances. And boosters can’t entice high school athletes to attend a college or university with promises of payment.

There are, of course, nuances to every rule and smart people who understand how to technically abide by them.
...

According to a recent report, Syracuse basketball coaches are showing interest in 2024 four-star wing Dwayne Pierce from New York City.

College basketball insider Adam Zagoria recently tweeted out that the Orange was among the teams expected to see the 6-foot-5 shooting guard/small forward amid the fall recruiting period.

Per national analysts and journalists, ‘Cuse coaches are checking in with a variety of targets during the fall recruiting period, when college coaches and others can visit high-school prospects in off-campus settings, such as open gyms.

Pierce, ranked in the top 100 within his class according to several recruiting services, is a junior at the famed Christ the King Regional High School in Middle Village, N.Y.

One of his teammates there is 2025 prospect Kiyan Anthony, a 6-foot-3 shooting guard who is the son of Orange legend Carmelo Anthony. Some experts deem the Royals as a pre-season top-25 squad ahead of the upcoming 2022-23 campaign.
...

Coming up on 20 years later, and the chants of “Let’s go Orange!” filling Albany’s downtown arena are still vivid in Gerry McNamara’s memory.

It was 2003 when McNamara, then a freshman guard for Syracuse, and his teammates stormed through Albany to win the East Region of the NCAA Men’s Basketball Tournament on the way to the program’s lone national championship, with the Sweet 16 and Elite Eight turned into de facto home games in front of an Orange-mad crowd that made the short journey west across the NYS Thruway to support the team.

“As soon as the bracket came out that year, we knew that we were in the East Region, so if we advanced to the Sweet 16 we were coming here,” said McNamara, who Thursday night was just uphill from the site of that memorable weekend at the Albany Capital Center as the recipient of the Inspiration Award at the 2022 Capital Region Coaches vs. Cancer Basket “Ball.” “We knew that would be a big advantage for us, and I just remember the chants of ‘Let’s go Orange’ here. Incredible environment.”

That year, Syracuse — the No. 3 seed in the East Region — pulled out a 79-78 win over Auburn in the Sweet 16 before dispatching No. 1 seed Oklahoma 63-47 in the regional final to send head coach Jim Boeheim’s team to New Orleans to the Final Four, where they won the national title behind Carmelo Anthony’s Most Outstanding Player effort, six 3-pointers in the first half of the national title game from McNamara and Hakim Warrick’s game-saving block to swat away Kansas’ last chance of a comeback.
...

Syracuse basketball recently hosted 2023 four-star guard Mike Williams from Maryland on an official visit, and according to a media report, that visit went quite well.

As we noted not too long ago, some national recruiting analysts had suggested that a strong official visit to the ‘Cuse could put the Orange in the lead for the 6-foot-4 Williams, who is a top-100 prospect and a top-15 shooting guard in his class, per 247Sports.

Certainly, that his trip to the Hill was positive is an encouraging development. At the same time, though, Syracuse basketball coaches have offered scholarships to more than 20 players in the 2023 class, with no commitments to date.

Understandably, that has left many Orange fans feeling frustrated about the team’s recruiting efforts in this cycle. In all fairness, though, the ‘Cuse did bring in a six-member 2022 class as well as a big-man transfer this past off-season, so it’s conceivable that the Orange’s 2023 cycle won’t be all that big.

A senior at the Bishop Walsh School in Cumberland, Md., Williams holds around 20 offers from a range of high-major programs.

At the end of July, ‘Cuse coaches offered Williams, who earlier this summer helped lead the Baltimore-based Team Thrill to the 17U division championship in the Under Armour Association league.
... 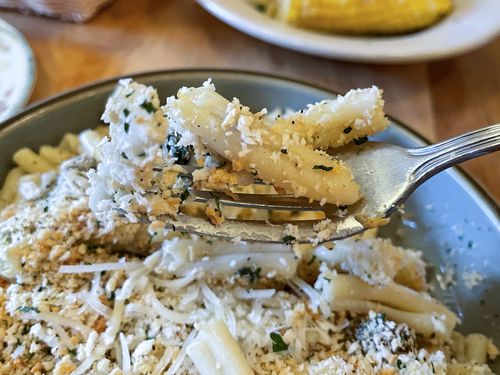 A forkful of strozzapreti with toasted breadcrumbs and parmesan cheese at the Moosewood Restaurant, Ithaca, N.Y. (Jared Paventi | jaredpaventi@gmail.com)

Leave it to the Moosewood Restaurant in Ithaca to break convention with its black bean burger ($17), making one that is actually juicy. Crumbly and dry is usually the result when you mash black beans together into a patty and fry it, but not so much here.

I couldn’t really tell how the patty was treated to get its juiciness — my guess is coconut oil, since the item is listed as vegan — but it was evident in the runoff from the burger. On top was a cilantro-spiked slaw that mixed together with chipotle aioli to add some earthy, tangy depth. We detected cumin and paprika in the burger itself, which lent itself to a smoky and spicy, but not hot, flavor. If there was a complaint with the dish, it was the paltry portion of roasted potatoes served as a side. They were good, but few.

The Moosewood has long been a trendsetter since its 1973 opening, pioneering both plant-forward vegetarian and farm-to-table dining concepts. Though it still inhabits space in the Dewitt Mall on North Cayuga Street, gone are the chalkboard menus and diner-style atmosphere. The collective of owners that founded and ran the Moosewood sold it to the daughter of a founding member. It reopened in May with a refined, upscale menu that merited a recent feature in the New York Times.

Our recent Saturday evening visit nearly didn’t happen. We were very lucky to score one of the last reservations available before 8 p.m., though it meant dining indoors and not under the large canopied area outside. The brightly-lit sunken dining room looks up at the street-level and passersby through large picture windows.

Moosewood’s commitment to local farming translates to an extensive list of Finger Lakes and New York wines, as well as locally-distilled liquors for its cocktails.

The Cayuga Daiquiri ($13) puts a twist on the classic, using local gin instead of rum. It was blended with Luxardo liqueur and lemon for a refreshing, boozy elixir. Liquid State, a brewery located a mile away, supplied a traditional gose ($9) with tart lemon flavors and an intentionally salty finish.
...