Change Ad Consent Do not sell my data Orangeyes Daily Articles for Wednesday - for Football | Syracusefan.com
Menu
Log in
Register
Install the app
You are using an out of date browser. It may not display this or other websites correctly.
You should upgrade or use an alternative browser.

Blackout Wednesday, sometimes referred to as Drinksgiving, takes place the night before Thanksgiving Day, and in some parts of the United States is one of the biggest drinking and party nights of the year. Many college students come back to their hometown for Thanksgiving, and go to bars the night before to meet their friends whom they haven't seen while away at school. Many bars mark the occasion by having promotions and drink specials as well. Thanksgiving is usually a low stress holiday for college aged kids, where gifts don't need to be purchased, and older family members do the preparing of meals. This leaves college aged kids with more expendable cash, and the luxury of eating a big meal the day after drinking without having to prepare it.

The highly touted senior from Parkland High School in Winston-Salem, N.C., announced his decision on Twitter.

The 6-foot-2, 210-pound Kpogba is rated three stars and the No. 20 outside linebacker this cycle by 247Sports.com's composite rankings. Kpogba, who is rated four stars by , has been offered by SU, Florida State, West Virginia, Duke, Tennessee, Virginia and Purdue, among others. He took an official visit to Syracuse two weekends ago.

Kpogba, who decommitted from WVU in October, was one of three high-profile recruiting targets to visit Central New York for the team's win over Louisville. Mikel Jones, a four-star linebacker from Florida, and James Hudson, a Michigan offensive tackle transfer who was rated four stars in the Class of 2017, were also on campus.

The Orange now has 12 commitments in its Class of 2019, including two linebackers in Kpogba and Canadian Geoffrey Cantin-Arku.

All verbal pledges are non-binding until the player signs a national letter of intent, which can be done during the early signing period from Dec. 19-21 or after National Signing Day on Feb. 6.
... 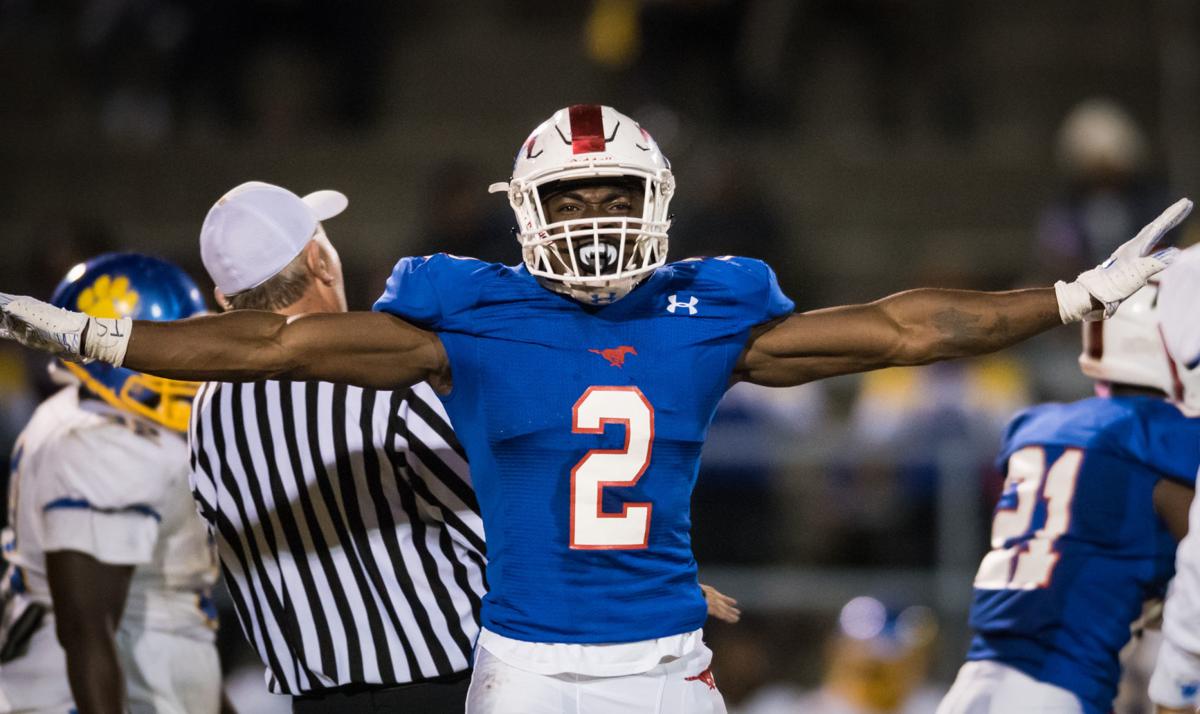 The 6-foot-2, 210-pound senior received an offer from the Orange in April, and recently took an official visit on Nov. 10.

...... my recruiting process is over ...thank you god for giving me this opportunity #BeTheA19HA #juicedup pic.twitter.com/aMzMcewWyE

Kpogba, a 4-star prospect ranked No. 109 within the Rivals250 list of top high school recruits in the country, decommitted from West Virginia on Oct. 9 to explore other options. He looked to end recruitment before the early signing period in December. Kpogba was extended an offer from the Mountaineers in June 2017 and followed it up with a verbal commitment four months later.

Kpogba received offers from multiple Football Bowl Subdivision programs, including several from the Power 5 conferences. Florida State came along with an offer on Oct. 15, just after his decision to decommit.

At Parkland, Kpogba has led the defense with more than 80 tackles, 14 sacks and three fumble recoveries in his final season. He's also played a role in the Mustangs' ground game, accounting for more than 500 yards rushing and nine touchdowns on the year.

Parkland, an eighth seed in the NCHSAA Class 3-AA playoffs, defeated No. 9 Asheville on Nov. 16 to earn the team its first postseason victory since 2007. Kpogba and the Mustangs take on No. 1 Watauga on Friday in Boone in the second round of the playoffs.

Four months ago, I gathered with hundreds of other football junkies at the ACC’s Football Kickoff event in Charlotte, NC. While there, I found myself going back and forth about how many games SU would win this year. Six, seven, or would they fail to reach a bowl game yet again?

Not once did I think this Orange team had the potential to win nine games. They can do that on Saturday against Boston College.

My thought process was simple: Syracuse will make a bowl game and at best case win eight games. Anyone who thinks they’ll win more than eight is crazy. Well, it looks like I’m the crazy one. I expect the Orange to win this weekend. When they do, we all owe Dino Babers and his staff an apology.

Syracuse has bucked so many negative trends this year, including no wins after the bye, winning away from home in the ACC and being able to overcome injuries to significant players. Babers told us before the season that his program made adjustments and we are seeing those changes come to life.
... For four years, Eric Dungey has gone hard on every play, and it’s safe to say his efforts have produced results.

He’s Syracuse’s all-time leader in total yards and second in touchdowns, but more importantly, has quarterbacked the first ranked Orange team since 2001.

To that, Syracuse certainly has Dungey to thank. In his senior season, Dungey ranks 4th in the ACC in passing yards, and second among the conference’s quarterbacks in rushing.

However, against Notre Dame this past Saturday, Dungey went down with what the team called an “upper body injury.” But from the looks of it, it appeared that Dungey was grabbing his back as he went to the ground.

Whatever the exact diagnosis is, Dungey’s status for Saturday at Boston College remains unclear, with Dino Babers adding that he hopes the senior is able to play.
...

BC Opens As 7.5 Point Favorite Over Syracuse (bcinterruption.com; AJ Black)

Boston College surprisingly opens as a 7.5-point favorite over visiting No. 19 Syracuse.

Seems like a lot, but Vegas must be accounting for Syracuse QB Eric Dungey possibly missing the game.

Updated bowl projections, where the fun stuff is outside the CFP race (sbnation.com; Kirk)

Week 12 wasn’t expected to be a shakeup Saturday, and boy, it wasn’t! For the eleventeenth week in a row, very little altered the Playoff race. But everything else, though?

Each week, I update a board of projected winners for every FBS game, tally up records, and guess what the Playoff committee and bowl committees would do with the results. Things get closer and closer to eventual accuracy as Selection Sunday nears, but more importantly, it’s some weekly fun!

Below, projections for all 40 2018 bowl games. A lot of these will change dramatically over the next month, so if you don’t like where your team is listed, I bet a few wins on the field will change things!

Championship (Santa Clara, California): No. 1 Alabama vs. No. 2 Clemson

This part’s easy for now and has been mostly the same for weeks. Ohio State beating Michigan would probably just change the name of the team that loses to Bama. Most other things wouldn’t matter. Georgia beating Bama would race hell from coast to coast. For now, the madness is not at this level.
...

There’s a ton at stake this week when the Virginia Cavaliers football team travels to Blacksburg to take on Virginia Tech: bragging rights, an 8-win season, catharsis for Virginia fans, validation for the Bronco Mendenhall rebuild, juice on the instate recruiting trail, a chance to kick Tech while it’s down, a possible meltdown of the Hokie fanbase, and more.

But beating the Hokies would also give Virginia its best chance to reach an attractive bowl game. The Hoos are right in the thick of the ACC’s bowl teams and only have one last opportunity to make an impression to bowl committees. Winning on Friday could send Virginia to a drive-able game against an SEC opponent. Losing could send the Hoos to a far flung destination against a Group of Five team.

The 2018 season has exceeded most everyone’s expectations, and it would be great for fans to celebrate the team’s success with an enjoyable bowl experience. The team deserves a great bowl turnout. The fans deserve a party.

If the Hoos can win Friday, bowl season could be an awful lot of fun.

Just like last week, there’s little consensus among the pundits about Virginia’s postseason destination. Out of the ACC’s Tier 1 and Tier 2 bowl games, Virginia had at least one projection for six of them.

The 2018 ACC Championship Game is set: Clemson vs. Pitt

TicketMaster is the official source, but VividSeats also has tickets available for the ACC CG - for as little as $60 as of this writing (but not many of those cheap tix!)

(NOTE: Neither TicketMaster nor VividSeats compensates me in any way for this blog).

Did you see the NFL game between the Rams and the Chiefs? Here's the final score:

Leading to the obvious question: should the Big XII add Kansas City?

Staying in the Big XII, it's official: Kansas football has hired Les Miles, former "Mad Hatter" of LSU. I'm not saying he's getting senile or that he's been hit in the head one too many times, but you HAVE to listen to this video:

In honor of the ACC CG participants, here's a look back at the last Pitt met Clemson:

Golic & Golic Jr: The advantages of joining the ACC are minimal for Notre Dame :: WRALSportsFan.com (wralsportsfan.com; podcast; Adam and Joe)

ESPN Radio's Mike Golic and Mike Golic Jr join Adam and Joe to discuss Notre Dame in the ACC, why they liked and disliked Rams/Chiefs and why the Saints are the best team in the NFL.

There were more than a few USC fans happy with the Trojans’ loss to UCLA last weekend. To them, it marked the death knell of the Clay Helton coaching era. As Helton and his team entered the tunnel to the visiting team locker room at the Rose Bowl after the 34-27 loss in the Crosstown Showdown, there was a sign greeting them. “HELTON OUT. TIME FOR CHANGE.”

Helton never really was anyone’s first choice when he was named head coach at the end of the 2015 season. Well, no one except the only person that mattered at the time, athletic director Pat Haden. Helton was elevated to interim coach when Steve Sarkisian had to take a leave of absence to deal with his substance issues in mid-October. He went 5-2 losing to Notre Dame and Oregon, but he won five conference games, including a win over UCLA, securing the Pac 12 South Championship. Within two days of that, the interim tag was removed, and he was named head coach. The Trojans promptly lost the conference championship game to Stanford and the Holiday Bowl to Wisconsin.

The howling got louder in 2016 when USC started 1-3, with losses to Alabama, Stanford, and Utah. The team rattled off eight wins in a row after that including back-to-back victories over UCLA and Notre Dame, and capped off the season with a thrilling three-point win over Penn State in the Rose Bowl to finish 10-3.
... 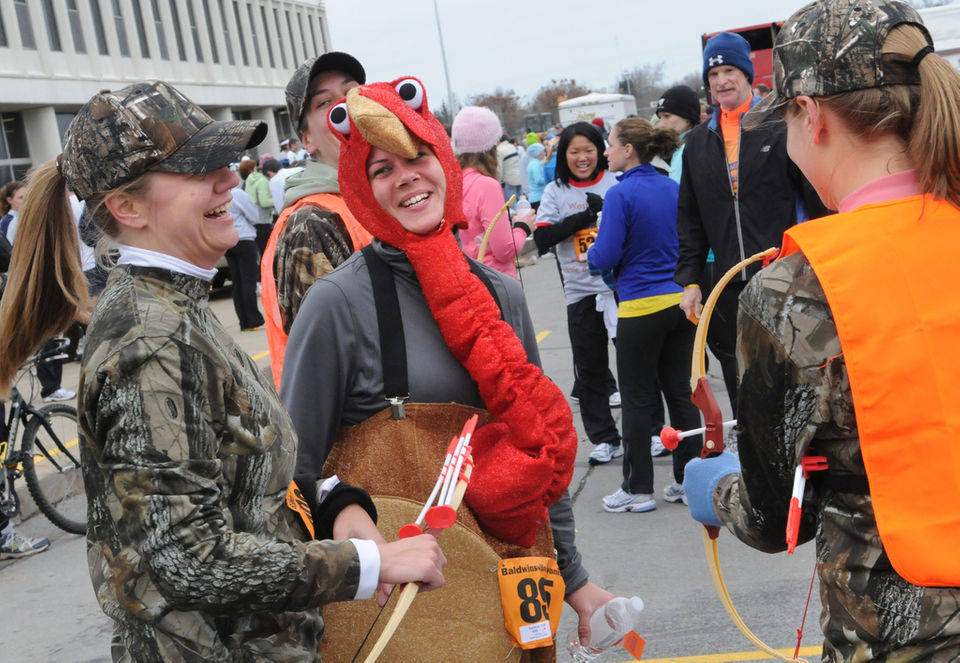 Happy Thanksgiving, Central New York! Start your Thanksgiving Day off with one of many morning Turkey Trot runs before diving in for the food. Then head out on Friday for the Clinton Square tree lighting or any number of other festive activities.

Get some exercise before you fill your face with turkey and sit on the couch and watch football all day.