Animal-shaped cookies similar to animal crackers were being eaten in the United Kingdom in the 1800s. By the 1870s, animal crackers, which are a type of snack and not a brand, were being made in the United States. The Stauffer Biscuit Company started making them in 1871. The most popular brand, originally known as Barnum's Animals, began being made in 1902 by the National Biscuit Company (now known as Nabisco). They were named after P.T. Barnum and were sold in small packages that were designed to look like circus trains. The packages had a string at their top and were intended to be hung on Christmas trees. Now known as Barnum's Animals Crackers, they have been shaped into 37 types of animals throughout the years. In general, animal crackers are usually shaped into zoo or circus animals such as lions, tigers, bears, elephants, and monkeys.

Syracuse football enjoyed one of its best seasons in nearly 20 years with a 10-3 2018 campaign. It was a resurgence for the Orange under third year head coach Dino Babers, who has changed the culture within the program and instilled a winning attitude that is sustainable beyond just one season. Looking ahead to 2019, there is plenty about which to be optimistic.

Syracuse returns many of its skill position weapons on offense, many key contributors on defense, one of the best punters in the country and the Lou Groza Award winner at kicker. Expectations will be high headed into the season, especially with, on paper, the appearance of even more depth than was enjoyed in 2018. That despite losing players like Eric Dungey, Jamal Custis, Chris Slayton and several others.

With that in mind, let's take a look at what the depth chart could look like when Syracuse kicks off the 2019 season at Liberty with the conclusion of spring football.

Entering spring football, Tommy DeVito was the clearcut starter as Eric Dungey's replacement. Nothing changed during the spring session he was strong throughout. He saw meaningful action last season, leading the Orange to victories over Florida State and North Carolina. DeVito has a big time arm with tremendous arm talent and has shown the ability to be extremely accurate down the field. That will benefit the Orange offense. With Chance Amie gone, Welch is the clear backup. Rex Culpepper is the third string guy. Both Welch and Culpepper had solid springs, and their battle for the backup spot is not over. If needed in an emergency, true freshman David Summers would be the guy after that.
... 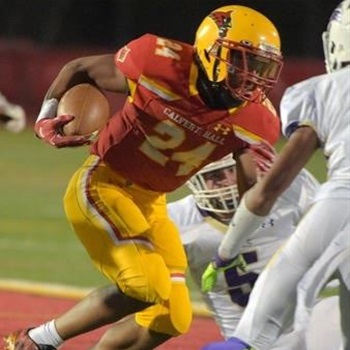 The Syracuse football team has added a former track star in the 2020 class. Our recruiting analyst broke down his tale of the tape here.

Right as the Syracuse football spring game was beginning, the Orange added a running back who will eventually play in that same game. Sean Tucker, a track and football star from Towson, Maryland announced his intentions to commit to Syracuse.

Tucker is a tremendous speedster for the Calvert Hall Cardinals, a prep school in Baltimore. According to the Daily Orange’s Billy Haden, Tucker ran the second fastest 100-meter dash in Calvert Hall history. The high school junior lists his 40-yard dash on his HUDL profile, as a 4.3.
... 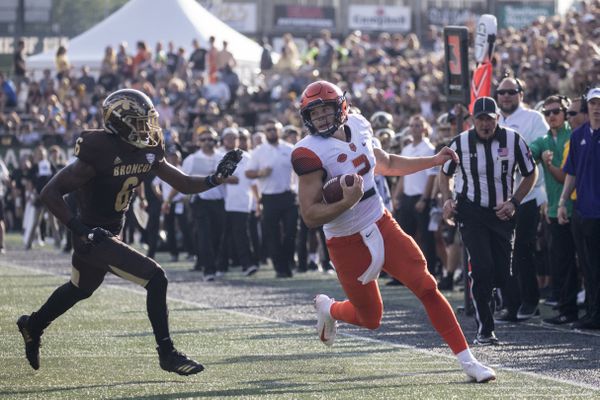 Western Michigan’s future nonconference football schedules are starting to take shape, and the matchups include some marquee home games within the friendly confines of Waldo Stadium.

The program officially announced Wednesday the addition of a home-and-home series with Syracuse for 2020 and 2023 and another with Pittsburgh for 2021 and 2022.

The Broncos also travel to Syracuse this season for the second game of another home-and-home series that saw the Orange come to Kalamazoo in 2018.

The two Atlantic Coast Conference teams will be the seventh and eight squads from a Power 5 or BCS conference to visit Waldo Stadium in the past 20 years.

"We always strive to provide our fans an opportunity to watch the Broncos take on Power 5 opponents in Kalamazoo," head coach Tim Lester said in a release. "These two series bring two of the most historic programs in the country into Waldo Stadium and we couldn't be more excited for the challenge."
...

Here's a summary of the ACC teams in the top 30:

Now, a team in the ACC holds the easiest schedule in college football.

Wake Forest University announced on Tuesday that it has moved its football game at Rice University to a Friday night.

The game, originally scheduled for Sept. 7, will not be played on Sept. 6, with kickoff slated for 8 p.m. – the same time high school football games across the state will be played.

According to a release from Wake Forest, the game is being moved to accommodate Conference USA’s television package.

The N.C. High School Athletic Association has long opposed Friday night college football games because of its potential adverse effect on high school football, particularly when it comes to the money schools make at the gate.

“At the high school level, Friday night football games provide much of the revenue that underwrites other athletic opportunities for students, which in turn may help to provide them with an opportunity to perhaps reach the next level of competition,” NCHSAA Commissioner Que Tucker said. “Futher, we believe that a healthy and vibrant high school football community in the state and country provides the foundation for the success of the college and professional games many across our nation enjoy each Saturday and Sunday.”
...

Injuries, players who haven’t lived up to their talent evaluations and late arrivals not participating in spring practice have forced the Miami football team to move the offensive line.

Rising junior center Corey Gaynor’s injury that has him out for the remainder of the spring has had the biggest impact on the movement of the offensive linemen on the Miami football team this spring. Navaughn Donaldson has played right guard for most of his Miami career, was recruited as a tackle and has played center with Gaynor out. 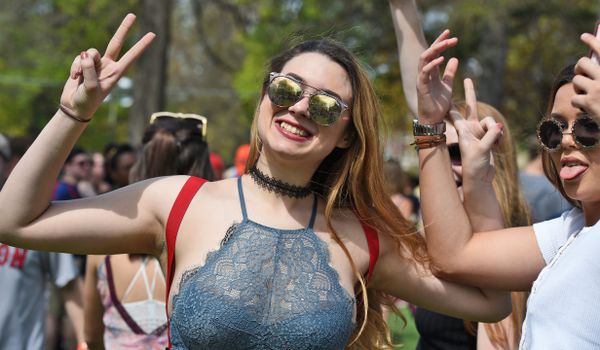 Seven colleges in Upstate New York are among the top 100 party schools in the U.S., according to a new list.

Niche, a Pittsburgh-based website that analyzes neighborhoods, school districts and colleges, has released its 2019 list of the top party schools in America. Syracuse University is the highest ranked party school in all of New York state at No. 19 overall, up from No. 27 on Niche’s list last year.

“Amazing school to go to. Crazy parties not just on campus but also off," one student wrote on Niche’s website.

Syracuse University has also been named one of the top party schools by the Princeton Review, including No. 4 last fall and in the top 10 seven years in a row. Playboy magazine also named Syracuse a top 10 party school in 2015 and online delivery service goPuff dubbed SU the “Booty Call Capital” of America.
...

"Booty Call Capital" - maybe we can use that as a recruiting bonus.

Hey, we can't play against ourselves... that MUST be it!

Hey, we can't play against ourselves... that MUST be it!
Expand...

No, but with yourselves...well, that’s an option. Doesn’t help your strength of schedule, but it won’t hurt it either!
You must log in or register to reply here.