Giving Tuesday is a global day of giving that kicks off the charitable giving season. Coming just after Black Friday and Cyber Monday, it was created in part as a response to the commercialism and consumerism of those days. It was started in 2012 at the Belfer Center for Innovation & Social Impact at the 92nd Street Y—a cultural center in New York City that has focused on values such as service and giving since its founding in 1874. The Belfer Center partnered with the United Nations Foundation in the days' creation. The day has been sustained by the founders, as well as a team of influencers, including CEOs from various companies, and the Bill and Melinda Gates Foundation, which has provided leadership support. On the day, a diverse group of individuals and organizations—nonprofit, civic, business, and corporate—celebrate by donating and giving their time, talents, and resources. Thousands of organizations now participate in the day worldwide, in almost 100 countries.

Syracuse football is looking to improve the QB room in 2020. They got 1 step closer to that with a pending Cade Fortin decision. Here are details.

Prepare yourselves Syracuse football fans, there’s going to be a lot of transfer portal news and nuggets over the next several weeks.

Dino Babers and Kirk Martin are expected to make an in house visit on Monday, per Cade Fortin.
Syracuse football has struggled to consistently recruit quarterback prospects excluding Tommy DeVito. Outside of landing their prized savior, the Orange have swung and missed on a slew of prospects.
Landing Fortin would be a monumental win for Syracuse.
He said that he plans on making his decision official prior to the early signing day (December 18). The Orange don’t have a quarterback recruit committed for the 2020 class to date.

Tommy DeVito, Rex Culpepper, and David Summers is your group of guys. Clayton Welch is graduating and Culpepper and Summers aren’t realistic threats to push Tommy for playing time in 2020.
...

Many otherwise decent ACC football teams had one glaring weakness this season which desperately needs to be fixed - by their bowl game if possible. So I'm posting my comments from a thread I created on CSNBBS to discuss "the ONE thing" each ACC football team needs to fix...

Boston College needs better defensive back play. Kansas passed at will, and stopping the pass has been a struggle for the Eagles (125th in passing yardage allowed).

Duke - stop pretending you can beat Alabama and Notre Dame in the same season. You can't (not yet at least). Replace one of those with a cupcake and you're in a bowl. Just be Duke.

Florida State needs better pass protection from the offensive line (I'm pretty sure the FSU quarterbacks had nightmares of another blindside hit from a Gator pass rusher). By the way, is it just me or does their left tackle need to split out a little wider?

Georgia Tech may have more than one thing to work on but PLEASE find a QB who can actually throw a catchable pass! Man, that was ugly!

Louisville - when the opponent demonstrates an inability to pass, STOP THE RUN! Gap integrity was terrible, with cut back lanes for that Kentucky player they call a QB all day. Sometimes it's not about how fast you get into the backfield - it's about making sure there are no holes to run through.

Miami... I'm not sure what you guys need, but I have a feeling it's something to do with not preparing properly. How can you nearly beat Florida, then lose to UNC, then win 3 of the next 4 (including the eventual division champs), then lose to freaking 3-9 Georgia Tech, beat Pitt, FSU and Louisville, then lose to FIU and Duke? You have to get up for EVERY game, not just the exciting ones.

UNC played very well as the underdog, but needs to learn to play as the favorite and/or the hunted (e.g. the Wake Forest and Appalachian State games). Similar to Miami's problem.

NC State didn't win another game after beating Syracuse. They finished the season with 6 straight losses. Wow. Could be a depth issue - better hit the recruiting trail hard!

Pitt finally got the defense fixed - and couldn't remember how to score! In particular, the Panthers need to improve on red zone scoring (97th overall).

Syracuse needs to beef up that offensive line and start running the football more effectively - but more than that, I think they to take non-conference games more seriously - at least as seriously as conference games (that was an issue in the Big East as well, IMO). If the Orange had simply beaten Maryland (like almost everyone else did), they'd be in a bowl game this year. They need to win their P5 OOC game next year! (Fortunately, it's at Rutgers).
...

From the official ACC press release:

The Jacobs Blocking Trophy has been awarded annually since 1953 to the player selected the most outstanding blocker in the ACC by a poll of the league’s head coaches and defensive coordinators. Becton is the first Cardinal to earn the trophy since Louisville joined the ACC in 2014.

The trophy is given in memory of William P. Jacobs, who served as president of Presbyterian College from 1935 to 1945. Becton will be recognized next weekend during activities surrounding the 2019 ACC Football Championship Game between Clemson and Virginia, which is set for Saturday evening at 7:30 p.m. at Charlotte’s Bank of America Stadium.

Becton, a 6-foot-7, 369-pound native of Highland Springs, Virginia, is a three-year starter for the Cardinals. He is a key player in a Louisville unit that leads the ACC in offensive efficiency (169.3) while averaging more than 442 yards per game. The Cardinals rank third among ACC teams in rushing yards per game (214.4) and fourth in points scored (32.7 per game).

Becton earned ACC Offensive Lineman of the Week honors on Oct. 7 following the Cardinals’ 41-39 win over Boston College and was credited with seven knockdown blocks in a late-season 56-34 win over Syracuse.
...

From an official ACC press release:

The Piccolo Award has been given annually since 1970 in memory of the late Brian Piccolo to the "most courageous" football player in the ACC. As a standout running back at Wake Forest, Piccolo was the ACC Athlete of the Year in 1965 and played for the Chicago Bears before his career was cut short when he was diagnosed with cancer. His courageous fight against the disease was an inspiration to the Bears and the entire football community.

Yeargin will be recognized this weekend during activities surrounding the 2019 ACC Football Championship Game between Clemson and Virginia, which is set for Saturday at 7:30 p.m. at Charlotte’s Bank of America Stadium.

In June of 2017, Yeargin, who began his college career at Clemson and had just completed his second season, was involved in a car accident near Greenville, South Carolina. His injuries included fractures of the C5 through C7 vertebrae at the base of his neck and a concussion.

Yeargin graduated in December of 2017, enrolled in a master’s program and was set to return to action for the Tigers in 2018, but symptoms related to the accident persisted and he decided to retire from football. Yeargin underwent surgery and became a student coach for the Tigers’ national championship run, but he continued to rehab under the watch of the Clemson strength and conditioning staff.
...

This is going to be a 2-part article. First, I'll show you what CBS, ESPN and Yahoo are projecting for bowl match-ups in part 1. Then in part 2 I'll tell you what I think will happen... 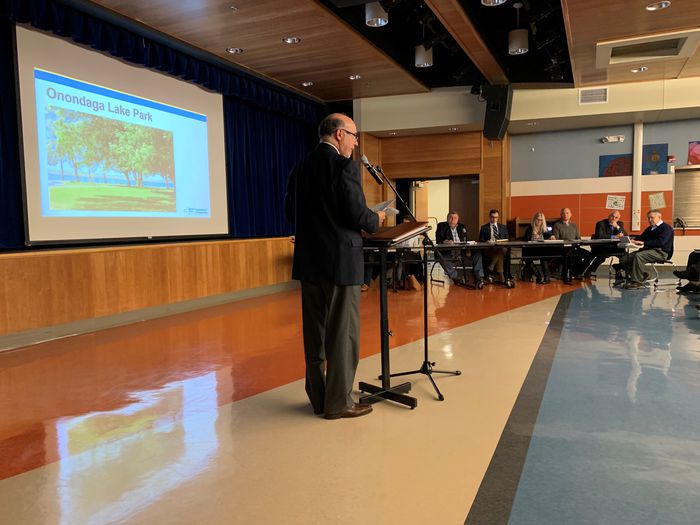 More than 100 people came to a public meeting tonight, many with the hopes of asking state transportation officials direct questions about proposed changes to Onondaga Lake Parkway.

An official from the Department of Transportation gave a 45-minute presentation about the changes, which includes reducing parts of the parkway from four lanes to two. But Ed Rodriguez, a DOT assistant regional design engineer, declined to stay for a public hearing to address questions from village residents and business owners.

“To have him leave right now, that’s not an interactive meeting,” said Bill Storm, a Liverpool resident for more than three decades. “It seems like it’s a one-sided initiative.”

During a 90-minute public hearing that followed, no one spoke in favor of the state’s proposal to take the two-mile parkway from four lanes to two. Instead, they have other ideas they say could make the parkway better:
...