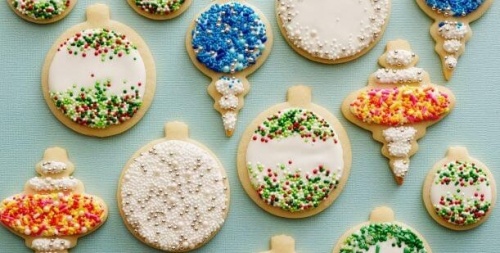 With Christmas three days away, most of us probably have already baked our Christmas cookies—maybe even having done so on Bake Cookies Day. But what good are cookies if we don't get the chance to share them and their recipes? National Cookie Exchange Day was created so that cookies and recipes could be shared and swapped at home and office parties. The day was created by Jace Shoemaker-Galloway, "the Queen of Holidays."

While Syracuse football offensive coordinator Sterlin Gilbert was navigating the end of a tumultuous 2020 season, he was actively working to bolster his unit's chances of an improved campaign next fall. For the past month or so, Gilbert has been heavily recruiting Mississippi State transfer quarterback Garrett Shrader.

A former four-star recruit who entered the transfer portal two months ago, Shrader committed to the Orange on Saturday night. Speaking with 247Sports on Sunday, he outlined the pitch Gilbert and head coach Dino Babers made to him.

"I wanted to go somewhere that has a pretty wide-open offense," Shrader said. "That was the biggest thing. I don't really care about the cold. I know we don't really have to deal with it playing in the Dome anyway. That was the biggest thing. I wanted to go somewhere where we put up points. I don't want to just be a game manager.

"... I wanted to go somewhere that's explosive where we throw the ball a lot, have an RPO game with a quarterback run and obviously (have) bunch of talent around (the quarterback) because you're only as good as the people around him. So Syracuse checked all of those boxes with me."
...

Syracuse football’s season may be over, but the look forward to next season has already started.

Last week, the Orange signed 19 players at the start of the early signing period, and with the exception of Hayden Nelson flipping to UCLA the day before, there was little drama for the Orange, as they got NLIs from every player they expected.

Now that we’ve had a week to digest, the question becomes how those 19 players will fit into Syracuse’s rebuild after a 1-10 season. I chatted with Stephen Bailey from 247 Sports on The Juice on the Cuse podcast to find out more about the 2021 NLI class.

But before we started on the incoming freshmen, I wanted to ask Stephen about the big news over the weekend, with four-star Mississippi State quarterback Garrett Shrader transferring to Syracuse.

“Bottom line is that they have two quarterbacks that are capable of playing at the Power 5 level,” Stephen said.

With Tommy DeVito announcing his return, there will be a quarterback competition in the spring. But regardless of who wins, it’s likely that both will play at some point. The last time SU didn’t have to play two quarterbacks in a season was back during the Ryan Nassib era in 2012.
...

Syracuse football head coach Dino Babers and Sterlin Gilbert made a splash on Saturday, landing a commitment from Garrett Shrader, a transfer quarterback from Mississippi State. A former four-star recruit, Shrader will look to compete immediately with Tommy DeVito for the starting job at SU.

Shrader told 247Sports that Babers himself guaranteed a chance for the sophomore to earn the nod in 2021.

"He said he's not bringing someone in to be the backup," Shrader said. "He's bringing me in to compete and ultimately try to win the job. I'm not coming to sit. That was a big thing when he said that. He said, 'I'm not bringing you in to sit here and back up. I need you to go win the job.' But he said, 'I'm not going to hand it to you.' He wants me to come in and make that quarterback run better and make the team better, and that's what I'm trying to do."

I’ve already taken a look at what Shrader could bring to the Orange in a breakdown of the team's quarterback room, but here I’ll take a much deeper dive into his skill set and fit under Babers and Gilbert.
...

Syracuse on SI’s Mike McAllister joins the show to talk SU Football, including what shakeups could happen now that former Mississippi State QB Garrett Shrader will join the Orange.

Ifeatu Melifonwu is the latest member of the Syracuse football secondary to declare.

Syracuse football slugged through a rough 2020 term in which it went 1-10 and saw a boatload of its players either opt-out amid the novel coronavirus pandemic or unfortunately get injured.

But Orange Nation can revel in the possibility that three members of the ‘Cuse secondary from the recently concluded campaign have a realistic chance to hear their name called in the 2021 NFL Draft.

Cornerback Ifeatu Melifonwu, a redshirt junior, said via Twitter that he will forgo his remaining eligibility on the Hill and enter his name into next year’s NFL Draft.

Melifonwu is an extremely talented defensive back who has received some buzz as a possible 2021 NFL Draft selection, according to analysts.

He joins star junior safety Andre Cisco and fellow junior defensive back Trill Williams, who by his own right is really, really good, as those players within the Syracuse football secondary who have declared for the 2021 NFL Draft.

That’s quite exciting to see for all of us ‘Cuse fanatics out there, although, at the same time, an Orange squad that proved sub-par in 2020 will have a lot to replace at defensive back in the 2021 stanza.

Thankfully, the ‘Cuse secondary boasts multiple other excellent players already on the roster. Plus, the team’s 2021 recruiting cycle features three-star safety Malcolm Folk and cornerback Duce Chestnut, who is rated three stars by 247Sports and four stars by .
...

2020 Strength of Wins/Pain of Losses

For those of you who aren't familiar with it, every year Phil Steele calculates two metrics he calls "strength of wins" and "pain of losses", which he also combines to get an overall number. Basically, "strength of wins" is the total number of wins of all the teams your team beat, while "pain of losses" is the total number of losses of all the teams your team lost to.

If you think about it, this is really a measure of the strength of your team's schedule and how they performed against that schedule - a sort of "strength of record" measurement.

Here's how ACC teams stacked up through the end of the regular season* in Phil Steele's Overall Strength of Wins / Pain of Losses Chart (* games played thru 12/12/20; not including Championship Week games).

note: everyone below Syracuse had zero wins
...

For those of you who want a simple explanation why Notre Dame was chosen over Texas A&M (and Cincinnati, for that matter) for the fourth playoff spot, SEC Shorts has you covered...


On the other hand, if you want a more advanced analysis, check out All Sports Discussion's "No reason to put Texas A&M in playoff over Notre Dame".
...

the shunning of Syracuse and the fixation on baby blue continues. Disgusting.

Highlighting programming this week on ACC Network, the 24/7 national platform dedicated to ACC sports, includes episodes from two original series ACC Traditions and All Access The ACC Life, as well as a festive special for the season - Packer and Durham Holiday Hangout.

About ACC Traditions
ACC Traditions is a series of 15, 30-minute programs produced in partnership with Raycom Sports, that focuses on the unique and rich traditions across the league’s 15 campuses, while showcasing a mix of fun, archival and new footage and interviews. Additional episodes of ACC Traditions will be announced in the coming weeks.

All Access The ACC Life
All Access The ACC Life gives a glimpse of a day in the life of ACC student-athletes, coaches, staff, parents and fans. The second installment of this 30-minute program premiering on Wednesday, Dec. 23 at 7 p.m., features eight-time NCAA Field Hockey Champion North Carolina and 2019 ACC Volleyball Champion Pittsburgh. The Tar Heel field hockey team recently wrapped up the 2020 fall season winning its fourth straight ACC Championship and 23rd overall, while Pitt Volleyball completed its 2020 fall season ranked ninth in nation. The show includes unprecedented access into the life of these student-athletes as they balance academics, practices and competition while following safety protocols during a global pandemic.

How Clark Lea’s tenure as SU’s linebacker coach led him to take over at Vanderbilt (DO; Shay)

Troy Henderson was a junior in high school when he had a 90-minute conversation with then-Syracuse linebackers coach Clark Lea. Henderson remembers Lea reviewing his film and giving him pointers on how to improve his play for his senior year. The coach detailed a plan that included academic, personal and spiritual components before offering Henderson a spot at Syracuse.

Henderson, who never had a conversation with another college recruiter that lasted more than five minutes, later accepted the offer and started at Syracuse in 2015. Lea made the decision to commit easy, he said.

“He was coming from a sincere standpoint with a good place of heart,” Henderson said. “That made me trust him and believe in him.”

Lea accepted a job at Vanderbilt, his first head coaching gig, on Dec. 14. His path back to Vanderbilt began in 2005 as a graduate assistant for the Commodores, and his journey to head coach included a three-year stint as Syracuse’s linebackers coach from 2013 to 2015. Under then-head coach Scott Shafer, Lea helped lead an SU defense that consistently was among the nation’s best in several defensive categories. His 15-player unit had six All-Atlantic Coast Conference selections, including future-NFL players Cameron Lynch, Marquis Spruill and Zaire Franklin.

He’s spent the past three seasons as Notre Dame’s defensive coordinator before being offered the job he’s wanted “since day one,” he said in his introductory press conference.

“I see him being one of the best coaches in Vanderbilt history,” Henderson said. “If I am a kid in high school and Vanderbilt offers me with Coach Lea, I am going there, 130%.”
...

The guys are back, recapping Clemson's dominant win over Notre Dame for the ACC Championship. What were the keys to the game that caused the game to get so lopsided, and how was this different than these teams' first meeting in South Bend? Afterwards, we found out that both Clemson and Notre Dame will be in the College Football Playoff, despite some frustrating arguments from the college football community surrounding the whole selection process. Finally, a quick look at the ACC's Bowl lineup and matchups! 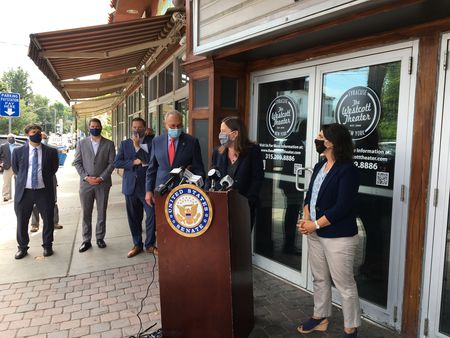 Covid relief bill includes $15B for independent concert venues, theaters: ‘We did it!’ (PS; $; Herbert)

Congress’ new $900 billion coronavirus relief bill includes good news for the entertainment industry, which has been largely shut down since the Covid-19 pandemic began in March.

Forbes reports the stimulus package includes a $15 billion SPA grant program for independent concert venues and theaters as part of the Save Our Stages Act. Introduced to the Senate by Sens. John Cornyn (R-TX) and Amy Klobuchar (D-MN) and to the House by Reps. Peter Welch (D-VT) and Roger Williams (R-TX), the legislation will help finance venue employees and the largely gig economy of workers in music events, theater performances, movie cinemas and other live exhibitions.

“I’m especially pleased this this bill will provide money for bars and restaurants, and $15 billion in SPA grants for theater operators and small venue operators through the Save Our Stages Act,” Sen. Chuck Schumer (D-NY) said Sunday night. “These venues are so important to my state and so many other states across the country. They are the lifeblood of our communities.
...
Last edited: Dec 22, 2020

Wow, big change. A costly one too!
You must log in or register to reply here.