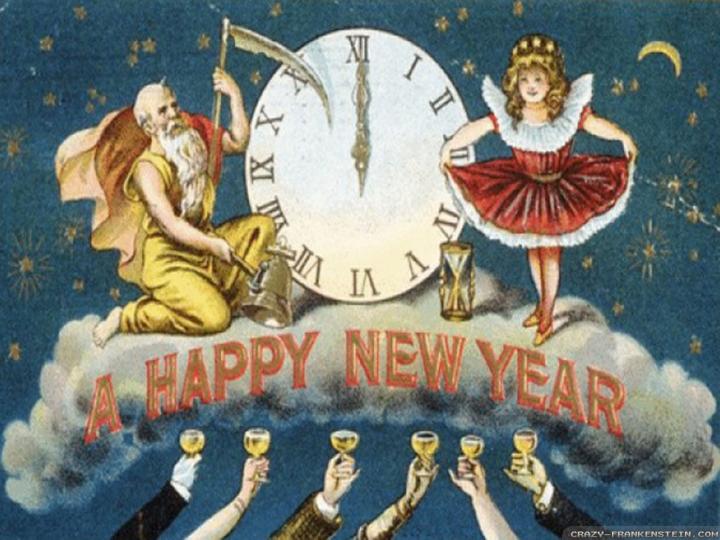 Old New Year's Day—the day that was seen as being the start of the new year—was observed on March 25 by many countries up until the creation of the Gregorian calendar in 1582. Even after this, some countries still observed the new year on March 25. This had begun in some places after Dionysius Exiguus introduced the Anno Domini calendar in 525 CE. Dionysius assigned March 25 as the new year because Jesus was to be conceived on the Annunciation, nine months before Christmas Day. The new year also was placed at this time because it was near the spring equinox.

Many countries in Europe used "Annunciation style dating" or "Lady Day style dating" during the Middle Ages and after. Scotland changed its new year to January 1 in 1600. England began observing New Year's Day on March 25 in 1155, and did so until they adopted the modern day Gregorian calendar in 1752. In England and nearby areas, during the March 25 new year, year-long contracts between landowners and tenant farmers began and ended. Farmers moving to new farms would travel on this day. When the calendar changed in 1752, these customs began being done on April 5. The UK tax year still follows the old calendar today. The tax year begins on April 6, which adds twelve days to March 25. Russia did not adopt the new calendar until 1918, and the Old New Year's Day is still regularly celebrated in some countries.

Testing times filled with adversity and challenges can make or break sportsmen. The last year or so has certainly been filled with those, although looking ahead to the 2021 football season, Syracuse Orange will be aiming to bounce back stronger. Building on experience and while not ignorant of past disappointments, the team will be keen to look ahead towards a much more positive new campaign.

Syracuse lost all but one of their eleven games in 2020, with the sole Orange victory coming against Georgia Tech at the Carrier Dome, underlining the fact that much improvement is needed this year. Once again, the strongest rival in both the ACC and the Atlantic Division will be Clemson Tigers, who have reached four of the last five National Championship games, winning twice and losing twice.

Looking at the early American football odds for the NCAAF 2021 Championship, the +100000 price for Syracuse would suggest they are distant outsiders. The Orange have gone without a conference title since 2012, and the last claimed national title was back in 1959. This implies that fans will need to remain patient, while encouraging the team to surpass all expectations this year.

The last time head coach Dino Babers led his team to a winning season was 2018, when Syracuse went 10-3 overall and finished second in the ACC, despite being picked to finish last by preseason media polls. As that campaign goes to show, college football results can often be capricious and unpredictable, whenever a group of players begin hitting the right groove and upsetting the odds.
...

Brent discusses the Syracuse Women’s Basketball season coming to a close last night and his thoughts on the program in the five years after their national championship appearance. In “H0T Takes” ESPN’s show “Get Up” is talking about the SU football team?

“Chapters: The Legacy of John Swofford” to Debut March 25 on ACC Network
GREENSBORO, N.C. (theACC.com) – “Chapters: The Legacy of John Swofford,” a 60-minute documentary that details the distinguished career of the former Atlantic Coast Conference Commissioner, will debut on Thursday, March 25 at 6 p.m. on ACC Network.
“Chapters” offers personal reflections of Swofford’s career, beginning with his days as a high school football star in North Wilkesboro, North Carolina, and continuing through his unprecedented 24-year run as ACC Commissioner. Produced in black and white, the documentary provides a unique perspective on Swofford’s time as a University of North Carolina quarterback under first-year head coach Bill Dooley; his first job at Virginia under athletic director and former league commissioner Gene Corrigan; his tenure as North Carolina’s athletic director; and the important impact of his family on his career.
...

UGASports - Five ACC programs off to a hot start for 2022 (r1vals.com; Gorney)

The 2022 recruiting class has just kicked off but there are already teams in Power Five conferences that have jumped out and started to load up. Here is a look at five ACC programs that are doing well so far.

The question has been asked whether the 2022 class will be Florida State’s start to its turnaround to be a national contender again. That’s unknown, but the Seminoles are definitely off to a fantastic start with this group.
Five-star Travis Hunter leads the way and he would arguably be among the top players at both wide receiver and cornerback. Former Florida pledge Sam McCall is another high-profile pledge at defensive back and three-star defensive end Nyjalik Kelly has had a terrific offseason.

There is still a long way to go and many other top prospects to compete for in this recruiting class, but coach Mike Norvell and his staff are definitely on the right track.

Coach Jeff Hafley has drawn rave reviews since arriving in Chestnut Hill and early on in the 2022 class he has the Eagles with the second-best class in the conference. Boston College has nine commitments, more than any other program in the ACC, so that has helped its ranking.
All nine are three-star prospects, so the average star ranking is not great, but BC has shown an aggressiveness to get out and land top targets early. High three-star cornerback Jamal Hood leads the way as Hafley and his staff have done a great job winning some regional battles.
...

The nation’s second largest movie theater chain will reopen next month after being closed for most of the past year.

Regal Cinemas will reopen April 2 with “Godzilla vs. Kong” in select theaters, parent company Cineworld Group announced Tuesday. Attendance will be limited to 25% to 50% capacity in about 500 locations, and face masks will be required at all times, except when seated and eating or drinking.

“We have long-awaited this moment when we can welcome audiences back to our Regal theaters and restore our essential role within the communities we serve,” said Cineworld CEO Mooky Greidinger. “With the health and safety of our customers, staff, and communities as our top priority, we continue to take all the necessary precautions and abide by our CinemaSafe guidelines to confidently provide a safe and comfortable experience.”

A rep for Destiny USA said they did not know if the Syracuse mall’s Regal theater would be among those locations opening. Regal did not immediately respond to a request for comment.

Gov. Andrew Cuomo allowed movie theaters in New York City to reopen earlier this month at 25% of their maximum capacity and no more than 50 people per screening. Theaters in Upstate New York have been allowed to open at 50% capacity.

Regal briefly attempted reopening in October under Covid-19 restrictions, including at Destiny USA, and 10 other locations in the state, but closed three weeks later. Other theaters, including AMC Theatres in Upstate New York and Movie Tavern in Camillus, have been open.
...
You must log in or register to reply here.