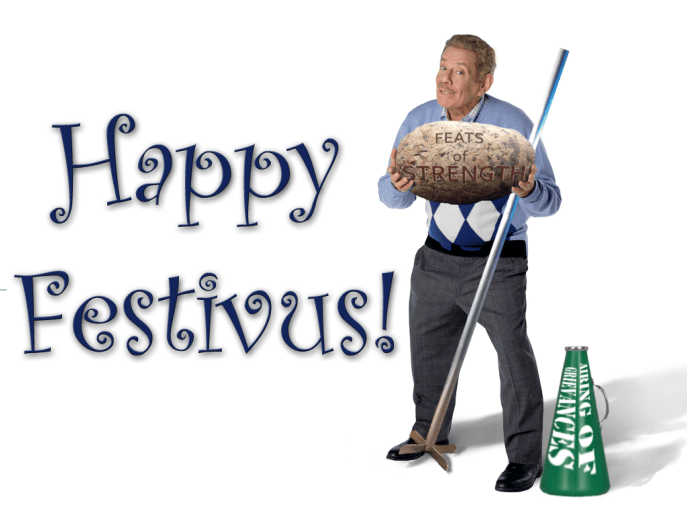 Festivus is a holiday that shuns the commercialism and pressures of the Christmas season, and takes place on December 23 each year. It was invented by writer Daniel O'Keefe, and originally celebrated by his family. The holiday permeated American culture after O'Keefe's son, Dan O'Keefe, wrote the holiday into an episode of Seinfeld titled "The Strike," which was first broadcasted on December 18, 1997. In the episode, the holiday was created by George Costanza's father Frank, and was celebrated at Frank and Estelle Costanza's house, with the attendance of Kramer, Jerry, Elaine, George, George's boss Kruger, and two men that Cramer invited that Elaine had been trying to avoid. 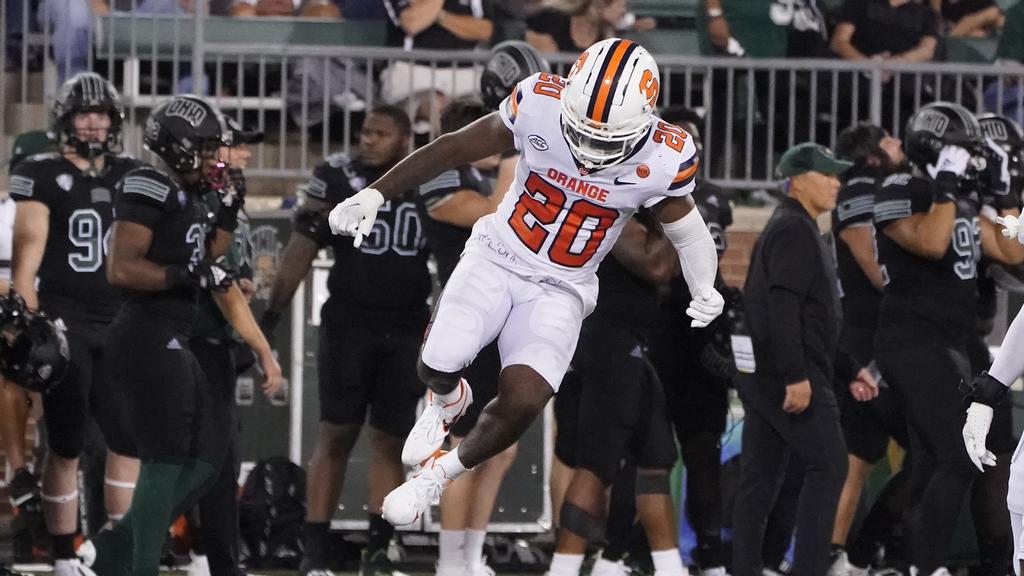 Duce Chestnut was named the Eastern College Athletic Conference's FBS Football Rookie of the Year for his breakout freshman campaign.

The Camden, N.J. native as named a Freshman All-American by ESPN, Pro Football Focus and 247 Sports, and finished second in ACC Defensive Rookie of the Year voting this year. He was named a third-team All-ACC selection at corner.

Chestnut wrapped up his true freshman season with the second-most passes defended in the ACC. His three interceptions led all Syracuse players, which he complimented with eight pass breakups. Louisville's Kei'Trel Clark led the passes defended category in the ACC (12). The Orange's Garrett Williams (10) led the league in pass breakups.

He became the third Orange true freshman defensive back in the last 40 years to earn a week one starting job out of camp, joining Andre Cisco (2018) and Markus Paul (1985). Both of whom eventually went on to be drafted in the first four rounds of the NFL Draft.

Season ticket deposits for the Orange's 2022 campaign are available now. The Orange can return as many as 17 starters of the 22 positions on offense and defense and will host a challenging home schedule that features non-conference games against Notre Dame, Purdue and Wagner in addition to the four home league games.
...

James Szuba from NunesMagician.com joins to discuss Syracuse's early struggles and his level of faith that the Orange can turn it around. Plus, the guys give their list of the three most important players for SU heading into ACC play. Also, what does Syracuse's path to the NCAA Tournament look like in a suspect ACC? Tyler Aki and James Szuba discuss it all and more on the Thursday edition of the Locked on Syracuse Podcast.

Teel: Yes, bowls have become glorified exhibitions, but ACC's football image sure could use a few wins (richmond.com Teel)

Playoff obsession has neutered most college football bowls, rendering them made-for-TV exhibitions that some players training for the NFL, or entering the transfer portal, deem unworthy of the time, effort and risk.
And that’s fine. As much as we’d like to see teams at full-strength, as counter-intuitive as not finishing the season feels to many of us, opting out of bowls is a personal choice. When you’re exploring transfer options or positioned to accrue considerable wealth in the NFL, even a New Year’s Six game can feel pointless.

All that acknowledged, and despite not having a College Football Playoff team for the first time, the ACC sure could use some bowl victories in the next two weeks, the pandemic willing.
The reason is image repair.

Not to suggest that a winning bowl record would prompt comparisons to the SEC, but after a disheartening regular season, this on the heels of an 0-6 postseason last year, the worst ever by a Power Five conference, the ACC needs some positive vibes.
During the regular season, ACC teams went 6-15 in nonconference games versus Power Five peers. One of those victories, Pitt’s at Tennessee, came against an opponent that has a winning record — the Vols are 7-5 entering their Music City Bowl matchup with Purdue.


Worse yet for the ACC: The league is a collective 0-9 this year versus nonconference opponents that were ranked by the Associated Press at kickoff. If you include nonconference foes among the current top 25, the mark dips to 0-11.

Now if you prefer to contort reality, North Carolina’s victory over Wake Forest was a nonleague game, staged because the state rivals meet so infrequently via the ACC’s flawed scheduling rotation. But that doesn’t mask the conference’s subpar regular season.

Virginia Tech, Florida State and North Carolina extended Notre Dame deep into the fourth quarter, or beyond — the Seminoles lost in overtime — but none could close.
Indeed, after going 0-3 versus ranked nonconference opponents last season, all in bowls, an ACC team hasn’t defeated a top-25 squad from outside the league since Clemson’s 2019 Fiesta Bowl victory over Ohio State.

The last ACC program other than Clemson to beat a ranked nonconference opponent was Pitt in September 2019, over Central Florida.

This postseason was going to offer the ACC two top-25 matchups, its fewest since 2012, with Pitt facing No. 10 Michigan State in the Peach Bowl, and Wake Forest playing No. 25 Texas A&M in the Gator Bowl.
...

Here are half of the ACC bowls for 2021 previewed courtesy of the ACC Digital Network...

The No.13 Pitt Panthers will look for their first win against a talented No.11 Michigan St. squad in the Peach Bowl. Pitt features a prolific offense that led the ACC in scoring (43.0) and was 2nd in yards (502.9). The Pitt defense is one of the ACC's best, ranking 5th in both points (23.1) and yards (348.6) allowed. They will need to put forth a total team effort to beat a talented group of Spartans.

The 2021 SERVPRO First Responders Bowl will feature Air Force versus the Louisville Cardinals. The 'Cards will be seeking their 12th bowl win in school history. They will look to do so behind an offense led by dynamic quarterback Malik Cunningham (3,702 TOT YDS, 37 TDR). The Louisville defense will have their work cut out for them as they try to stop the nation's top-ranked rushing attack in Air Force. Get set for this fantastic matchup right here!

The Ohio State football team is pursuing one of the best young pass-rushing defensive ends in FCS. Jared Verse, formerly of the University of Albany, entered the transfer portal on November 30th and has gotten a lot of interest from Power 5 programs.


The Buckeyes were briefly in touch last week, but Ryan Day spoke directly with Verse recently. The redshirt freshman told long-time Ohio recruiting expert Bill Kurelic of Bucknuts he liked what he heard from Day. Verse said the OSU head coach talked to him about taking a visit to see what the Buckeyes have to offer. So far, he has been to Florida State, Tennessee, Syracuse, and Houston. That leaves him with one more he can take and he said Ohio State is a possibility.

Verse is 6’4” and 247 pounds. His 10 ½ sacks are good enough for eleventh in FCS, earned him the Colonial Athletic Association’s Defensive Rookie of the Year, and second-team all-conference. He was a three-sport athlete at Central Columbia High School in Pennsylvania and ran on a state champion 4X400 relay team, so he has the type of speed and athleticism you want in a defensive end.

Right now, the Buckeyes are playing a waiting game to see what their defensive end group is going to look like heading towards the 2022 season. Tyreke Smith is leaving, but we are unsure of what Zach Harrison (read my article about his status here), Javontae Jean-Baptiste, and Tyler Friday, who missed all of this season with an injury, are going to do. If all three return and join Jack Sawyer, J.T. Tuimoloau, and four-star recruit Kenyatta Jackson, it is going to make for another crowded year at this position.

Will Verse want to walk into a situation like that? Out of the four schools he has already visited, the Ohio State football team is easily the most prestigious program. They also have Larry Johnson, who is regarded as the best defensive line coach in the country.
...

5 college football teams that will make some noise in 2022 (saturdayblitz.com; Lloyd)

Due to a strong 2021 showing and the possibility for one in 2022, a college football program from each Power Five conference should stand out next season.

With the current bowl season underway, the landing gear is officially out for this year’s installment of college football to come to its landing. With that said, teams and fans alike are looking ahead to what all the 2022 slate will have in store for them.

For some, a college football season is rarely “easy.” However, some others may have a good deal of positives to go off of, to such a degree that they can prepare for putting on one heck of a show next fall.

Now there are obviously a handful of teams out there that are almost guaranteed a solid season, including the likes of Alabama, Ohio State, and so on. But on the other hand, several have recently seen some underwhelming days, and have done a good job of beginning to bounce back from them.

Here is one college football team from each Power Five conference that has foreshadowed a strong showing for 2022.

In the ACC in 2021, there were multiple teams that defied expectations in a good way, along with those that did so in a bad way. The NC State Wolfpack fall into the former, winning nine regular-season games and coming just short of what would have been their first-ever ACC title game appearance.

Wolfpack head coach Dave Doeren has done an outstanding job building up his squad to be one of the top teams on the Atlantic Coast, beating the Clemson Tigers and taking Wake Forest (the Atlantic division champion) to the final moments of their battle with one another.

With this season’s showing, NC State has had its second-straight year with eight wins or more. It’s safe to say that the Wolfpack should make some serious noise next season.
...

As Year 3 of the COVID-19 pandemic approaches, college athletics continues to grapple with how to function with an ever-changing surface. According to a report from Andrea Adelson of ESPN, the Miami football program has entered COVID-19 protocols.

The Hurricanes are scheduled to play the Washington State Cougars on Dec. 31 in the Sun Bowl. Miami was scheduled to depart for this game on Dec. 26; however, that may be tricky now.

Adelson notes that different position groups have been impacted with several players testing positive for the virus.

From what I understand, there are multiple positive players across several position groups and it will be a challenge to leave as scheduled for El Paso on Dec. 26. But Miami definitely wants to try and play if possible. https://t.co/De6mLZSVIG
— Andrea Adelson (@aadelsonESPN) December 21, 2021
Expand...

The Miami women’s basketball program had to cancel a recent game vs. Duke while in the COVID-19 protocols, too.
... 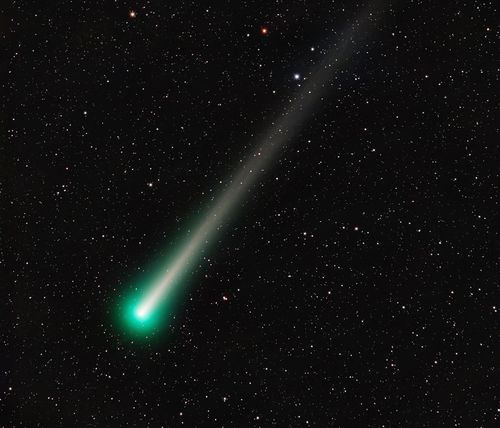 Last December, the “Christmas Star” was the big sky event that was drawing lots of attention. But this month the buzz is focused on another cosmic holiday treat — the “Christmas Comet.”

The newly discovered comet, officially called Comet C/2021 A1 but also known as Comet Leonard, is being billed as the brightest comet of the year, and some experts say it can be seen from anywhere in the United States and other parts of the northern hemisphere.

You will likely need binoculars or a small telescope to catch a glimpse of this icy ball of dust, but astronomers from NASA say “it may be visible to the naked eye under very clear and dark observing conditions.”

In general, your chances of seeing the comet get better if you find a dark area away from bright city lights or street lights. Experts from the University of Arizona say you also have a better shot at catching a glimpse if you look “very low above the horizon just after sunset.”
...
Last edited: Dec 23, 2021