Change Ad Consent Do not sell my data Orangeyes Daily Articles for Monday - for Football | Syracusefan.com
Menu
Log in
Register
Install the app
You are using an out of date browser. It may not display this or other websites correctly.
You should upgrade or use an alternative browser.

What is Pi?
“Probably no symbol in mathematics has evoked as much mystery, romanticism, misconception and human interest as the number pi”

Pi (often represented by the lower-case Greek letter π), one of the most well-known mathematical constants, is the ratio of a circle’s circumference to its diameter. For any circle, the distance around the edge is a little more than three times the distance across.

Typing π into a calculator and pressing ENTER will yield the result 3.141592654, not because this value is exact, but because a calculator’s display is often limited to 10 digits. Pi is actually an irrational number (a decimal with no end and no repeating pattern) that is most often approximated with the decimal 3.14 or the fraction 227.

Syracuse football has some changes within its recruiting department. The Orange has hired Khalil Ahmad as its new Director of High School Relations. He was previously a Player Development Assistant with Rutgers and an offensive/recruiting coordinator at Paterson Eastside High School in New Jersey prior to that.

The Director of High School Relations title was held by Deon Maddox. He remains with the program with a new title according to the Syracuse Athletics website. Maddox's new title is Director of Player Development/Alumni Relations. 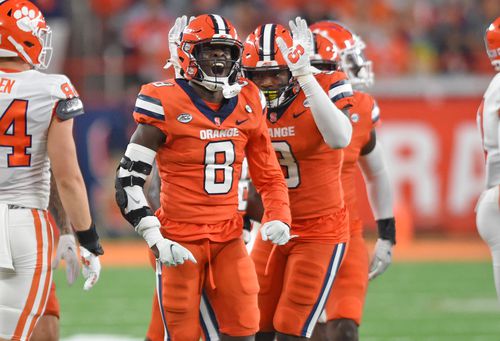 Both of them feel there is more they can do to prove themselves to NFL franchises and have belief that the team is primed for a successful season in 2022, citing the combination of factors as the reason they returned to Syracuse.

The choices of Jones, a linebacker, and Williams, a defensive back, were among the biggest doses of good news the Orange received this offseason, positioning the team’s defense to do big things as long as they’re able to capably replace their starting defensive line.

Together, the pair will lead a defense that has high aspirations in 2022. Syracuse will return eight starters on its defense, including all of its linebackers and defensive backs. The Orange has also added potential talent to the defensive backfield in Rutgers transfer Alijah Clark and Louisville transfer Bralyn Oliver.

Williams entered last season as Syracuse’s most talked about NFL draft prospect. At a rangy 6-feet and 189 pounds, he led the ACC in pass breakups as a sophomore (12) and had two interceptions, flashing high-level coverage skills as opponents tried to avoid more proven options in the defensive backfield such as Trill Williams, Ifeatu Melifonwu and Andre Cisco.
... 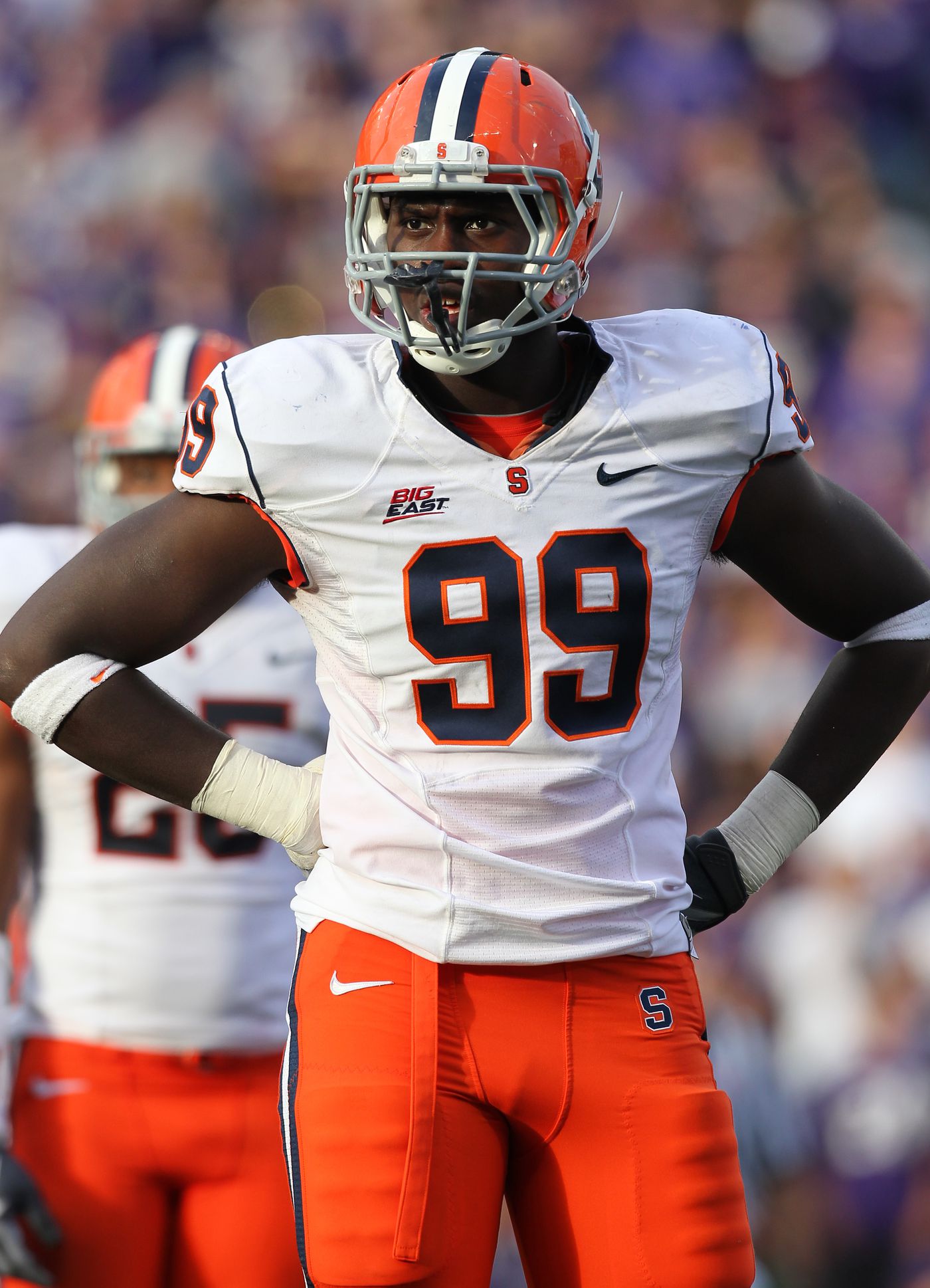 So you’re telling me there’s a chance?

The Buffalo Bills don’t have a lot of cap space entering the NFL’s legal tampering period on Monday, but money isn’t everything to soon-to-be free agent Chandler Jones. In fact, it’s not about money at all. That alone gives Buffalo a chance at signing the star pass-rusher.

Via AzCardinals.com, Jones told The NFL Players Podcast what he is looking for in free agency.

“To be completely honest, it’s not about money at all,” Jones said. “Where I am in my career, I’ve gotten contracts, I’ve gotten the Super Bowl, but I think scheme is huge. Or for me, winning more championships. I’ll say it again, it’s not about money. I will say I want to go to a place that maximizes my talents. There have been times in my career where I’d say I caught myself out of position. I do take the blame, but at the same time it’s like, ‘Hey, should I have been doing that?’ I have enough comfort where I am in my career and this age to say that.”

Of course, Jones isn’t going to sign for pennies on the dollar, but the Bills could at least convince the pass-rusher to take a bit of a “hometown discount” to end his career in Buffalo. As for finding the funds to sign a player like Jones, Buffalo still has some cuts and restructures that they can make in the next few days.
...

Louisville added another big piece to the puzzle of their 2023 recruiting class tonight with the addition of Jahlil McClain. McClain is an athlete prospect from California who is rated as a four-star prospect in the 247 composite and a “high three-star” in the On3 consensus. Lance Taylor is McClain’s lead recruiter so it seems obvious that the staff plans to play him at wide receiver though some teams view him as a cornerback. He also holds offers from Texas, USC, Oregon, Pitt, Arizona State, Arizona, and Michigan State.

McClain is a teammate of Pierce Clarkson at St. John Bosco in California and like Clarkson, there is a limited amount of film on him. Bosco is loaded with talent and that leads to guys having to wait their turn to get playing time but McClain got on the field enough to show his talents. I think that he has room to grow but McClain’s quickness really shows in his route running. He sets up his breaks well and he understands how to separate. He also makes a few tough catches and shows the willingness to take a hit.
...

Doughty will be recognized during Friday night’s first New York Life ACC Tournament semifinal game at Barclays Center. McLaughlin, who was not able to attend this year’s tournament, will be presented with the award in his hometown of South Boston, Virginia.

The Francis Award, presented by the Atlantic Coast Sports Media Association (ACSMA) recognizes individuals for distinguished service to, or coverage of, the ACC.

A 1974 University of Virginia graduate, Doughty spent 47 years at The Roanoke Times, compiling more than 10,000 bylines. Most of those stories were written about Virginia athletics, including more than 500 football games and 1,500 basketball games.

Doughty led The Times’ coverage on many of the Cavaliers’ biggest moments – including the men’s basketball program’s 1981 and 1984 NCAA Final Fours and 2019 National Championship team, as well as national titles in men’s and women’s lacrosse, men’s soccer and baseball. It is estimated that Doughty has driven close to 400,000 miles commuting round-trip from his home to Charlottesville for football and basketball games.

One of the first to cover high school football recruiting on a regular basis, his annual Top 25 ranking of Virginia high school players ran for 38 years. Inducted into the Virginia Sports Hall of Fame in 2018, he retired from The Times in January of 2021. However, he continues to make regular appearances on sports talk radio.

Doughty and his wife, Beth, live in Roanoke, Virginia, and are the parents of four children: Allison, Caroline, Michael, and Matt. 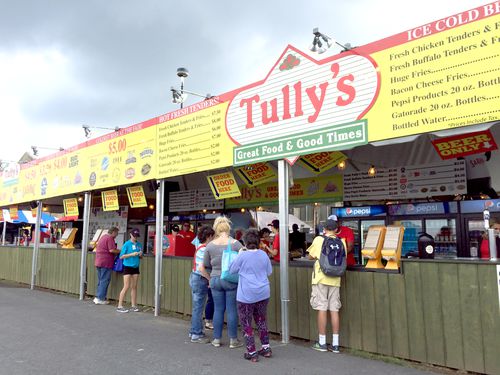 Before the first chicken tender is slipped into the fryer, owners of Tully’s have had to arrive in advance of opening day at the New York State Fair to build a plywood base beneath their tent.

“Every year we spend three weeks literally building a floor,” said Dan Giamartino, a partner in the family-run business that operates all the Tully’s locations.

After 20 years, that tedious task will end this year when the fair begins the first phase of a $1.4 million, permanent building that will replace the big tent where Tully’s has operated near The Eatery.

The building won’t be done until 2023, but a new concrete pad will greet Giamartino when the 13-day fair opens Aug. 24.

“It’s a big relief,” he said. “Not to mention this year of all the years. Can you imagine what lumber prices are going to be like?”

The state is paying for the 2,740-square-foot building and surrounding improvements out of its capital improvement fund, which comes from state taxpayers.

The new building will cover up the dumpsters that create an eyesore in that area of the fair and further the state’s goal of replacing tents with permanent buildings for safety reasons.

Tully’s gets to stay there because any vendor whose site is converted to a permanent building gets the right of first refusal, fair officials said.

But it will more than double the rent for Tully’s during the fair’s 13-day run.

And the fair’s $1.4 million investment will include much more than a place to fry chicken tenders. The project, which was awarded through a competitive bid, includes upgrades to fair’s wastewater and energy systems in that corner of the fairgrounds.
...