Change Ad Consent Do not sell my data It's All Cuse's Fault - Scarlet Knight Bitterness | Syracusefan.com
Menu
Log in
Register
Install the app
You are using an out of date browser. It may not display this or other websites correctly.
You should upgrade or use an alternative browser.

Looks like RutgersFan is now hopping mad with the Pac 12 block of Texas and OU... and it's all our fault:

WARNING: THIS POST IS BASED ON EMOTION AND FAN LOYALTY. IF YOU ARE A PREGNANT WOMAN, OR OTHERWISE UNABLE TO READ AND ANALYZE CRITICAL COMMENTARY, GO ELSEWHERE. READER DISCRETION IS ADVISED.

Why the title? Until last weekend, I had always hoped that Rutgers would go to the ACC rather than the Big 10. Better cultural fit, better geography, the ability to see away games. Those advantages still exist. I liked the idea of competing with the North Carolinas, North Carolina States, Dukes, Florida States and the rest. A good conference of rightfully proud members. Those advantages still exist. Syracuse and Pitt leaving? Hey it looked like WV was out the door with an SEC invite they couldn't refuse. The hole in the dike so to speak. Teams leaving were understandable. So what changed?

West Virginia's not leaving. And the reason Pitt is, is because of Syracuse.

I have no desire to see Rutgers in any conference with scumbags like Syracuse and Boston College. That's it. No other reason. I would rather Rutgers stay in the BE, try to rebuild it with West Virginia and UConn and others, than debase itself by being in a conference with these two private school Quislings.

What about Pitt you may ask? I understand Pitt leaving. Pitt, Rutgers, and West Virginia stood alone against the basketball onlies, and their gutless allies like Notre Dame and Syracuse trying to shove Villanova down the football conference's throat. Only these 3 teams stood up and said NFW, this will do nothing for football. The AD's of these three walked out on BE meetings because they were so disgusted. Pitt had enough of trying to make BE football into a decent conference. They got worn down by the constant BS pushed by basketball and their gutless football allies. The chance to go to the ACC came up and they took it. Godspeed Pitt. Good luck in the ACC.

But it is Syracuse that comes in for a special heaping of abuse. This is one of the teams, one of the football teams, that refused to stand up for the football conference and say that the Villanova choice was an absolute joke; that the only reason it was even suggested was to benefit the basketball schools by keeping out another football school; that by accepting Villanova and their joke of a plan for playing D1 football at tiny soccer stadium the BE would become the laughingstock of Division I. Why didn't Syracuse stand up? Because they are, in fact, nothing more than a basketball school.

Well so what? If Syracuse feels their interests are more fully aligned with basketball why not? No, there is no criticism here if Syracuse wanted to back their basketball friends. The criticism is what they did afterward. After standing by and probably in fact contributing to the pressure on Pitt, WV, and Rutgers to knuckle under and accept another basketball school as a pathetic excuse for football expansion, Syracuse turned around and hopped on the first train out of town, the first chance they got. This "founding member" of the BE turned its back not only the football schools it played with, it abandoned the basketball schools it supposedly supported.

So this is what you accepted ACC. If you were disappointed with Boston College, you ain't seen nothing yet. BC at least made a few ACC championships after joining. Syracuse football will never rise above the level of scum in the Great Dismal Swamp. Pitt will turn out to be a savvy addition. They have the motivation and desire to do well not only in basketball but football as well. Syracuse? They don't even have the motivation to field a baseball team. The only team in the ACC that doesn't have one.

And they have lied to you about how they will deliver NYC to your doorstep. As their chancellor bragged about providing the ACC with a "NYC dimension" the New York Times, an entity actually within 4 hours of New York City, felt otherwise. 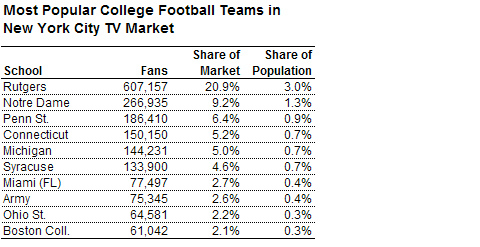 Seriously UConn would have been a better choice. And the ACC will be smart to eventually take them, blackmail from BC nothwithstanding.

To sum up? I had always hoped that Rutgers would eventually find a home in the ACC. But now? No thanks. Better to throw in our lot with a school like West Virginia, that has shared the brief victories and continuing defeats of trying to safeguard eastern football since the 80's with Rutgers. Better to continue to watch the ND/Big Ten comic opera than take a sure thing in a conference now sullied by the presence of a school that betrayed not only the football schools of the BE, but the basketball schools too, while simultaneously lying to the ACC about their NYC "dimension."


Good luck ACC. Pitt and eventually UConn will do well for you. But you have acquired another small northeastern school that bowl partners will shun like Boston College, in Syracuse University.
Expand...

I thought you all would find this read a good Wednesday morning laugher...

Long discussion on this last night. See link to thread.

kingtidge said:
Looks like RutgersFan is now hopping mad with the Pac 12 block of Texas and OU... and it's all our fault:

I thought you all would find this read a good Wednesday morning laugher...
Expand...

He may have a point about bowl bids. I recall many members of the board enjoying BC's #@$tty bowl bids even after a good season. Could happen to SU too. "small northeastern school that bowl partners will shun like Boston College, in Syracuse University."

He has no idea what kind of a program DM is building here.
You must log in or register to reply here.

A program spinning it's wheels