Change Ad Consent Do not sell my data Klosterman's Top 50 College BBall players of all time (going to cause a ruckus)... | Syracusefan.com
Menu
Log in
Register
Install the app
You are using an out of date browser. It may not display this or other websites correctly.
You should upgrade or use an alternative browser.

Klosterman's Top 50 College BBall players of all time (going to cause a ruckus)...

48. Gerry McNamara (Syracuse, 2002-2006): There have been many players better than Gerry McNamara. But how many humans ever played better than McNamara during the best week of his life? His four-game performance in the 2008 Big East tournament was more extraordinary than Billy Owens' entire career.

Odd that in a list of all-time greats he would put so much emphasis on one week.

i think he is pretty well deserved of this...

i dont think the week put him on the list, it just clinched his spot on the list.

Reddick ahead of Morrison?

No AI, no Shaq? dont think i saw david robinson?

NONE of the gtown centers?

OK... i read the rules for this list. I prob should have done that 1st.

It is not a ranking of the best college players.

It is a ranking of the most unorthodox college players who fizzled in the nba.

so i say again, NO PEARL?

Hard to take this clown seriously when he starts off the criteria by contradicting himself. Talent is most important...except when it's not.

Whatever you say, pal.

48. Gerry McNamara (Syracuse, 2002-2006): There have been many players better than Gerry McNamara. But how many humans ever played better than McNamara during the best week of his life? His four-game performance in the 2008 Big East tournament was more extraordinary than Billy Owens' entire career.
Expand...

Good concept...Brutal List. Pearl made the dome a happening and should have been in over GMac.
Chris Mullen absolutely deserved to be on that list also. And if Ewing "was too good" then the enforcer Michael Graham should have represented the physical Gtown style of the 80's

Yeha, it's not exactly a list of the top 50 college players of all time.

But please, on a list of the actual 50 best college players of all time, Gerry doesn't sniff it. But for what this list is, I'm sure it's a fine choice.

CiceroSwamp said:
Good concept...Brutal List. Pearl made the dome a happening and should have been in over GMac.
Chris Mullen absolutely deserved to be on that list also. And if Ewing "was too good" then the enforcer Michael Graham should have represented the physical Gtown style of the 80's
Expand...

Love the El-Amin description "unstoppable fat kid"... so true until that night that Jason Hart stole his lunch money twice in a row to start the game at the dome and we ran them off the court. One of the best wins for that team if I remember correctly.

Kind of shocked that there is no mention of DC or Lawrence Moten or the Pearl... if Jerome Lane makes the list they should to

Also no Patrick Ewing? I don't know how you can have a top 50 list that includes Jerome Lane but doesn't include Ewing, DC, Moten, Pearl, Chris Mullins, Kerry Kittles, Bobby Hurley, Donyell Marshall, Ray Allen, and probably a bunch of others I can't remember.

Should read the description. Title is a little misleading...

Whoops...Missed that one. his list went up a few points with me

Joe Lunardi makes lists too. Just because you can make a list doesn't mean you know anything.

This list is fun, but the knee-jerk reactions to it make it priceless.

Morrison should be top 5 on this list. That picture is hilarious, too. 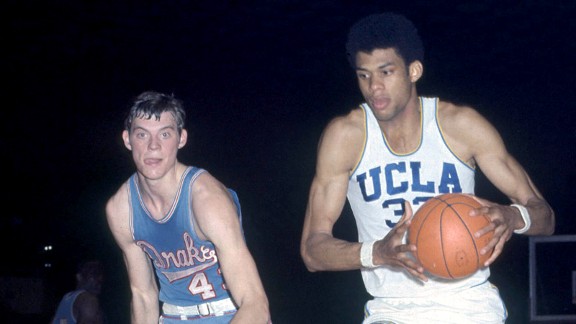 Never really thought about McNamara's week in 2006 as anything other than a great run as captain of the Syracuse team (and think it's goofy to compare it, however jokingly, to Billy Owens's career, which is why I don't like these lists). Looking it at statistically, though, it was interesting (and not very Owens-esque).

The assists and three-point field goal percentage were way higher than his career numbers (which jibes with my two most distinct memories of that week: he hit several clutch threes to win, tie, or keep us close in games; and he had a flawless first-half performance passing the ball against Connecticut - 9 or 10 first-half assists with 13 for the game, which I think was his career-high).

It's also remarkable that his two-point field goal percentage could be so dreadful. And those 3-14 and 6-17 games bring back bad memories of that three-year stretch.

All-in-all, though, a good week for McNamara and a great week for Syracuse. Though if I'm writing some silly list like this, my evidence comes in the form of his 43 against BYU and his 6-7 first half against Kansas, not in the form of these 2006 numbers. And the Billy Owens cheap shot was gratuitous (even though he was the best player on one of our most disappointing teams of all time that completed the Villanova/Richmond two-fer).

I would have put Bobby Hurley on that list, as much as I despise him.

(Sorry if Orangeyes or anybody else already posted this.)

Based on the criteria qualification, it's pretty reasonable.. I love the synopsis of why he picked him, but I'm young also, so I didn't exist during the Billy Owens years.

I was a little surprise Chris Mullin was not on it. I know it's made up of players who were not seen as quite as great in the NBA, but Walton and Kareem were both top 50 NBA players (when they retired) and made this list. Mullin seems to be in a similar category.

This list is a joke! Any list with JJ Riddick in the top 20 players of all time shows that there are way to many people without a clue calling themselves experts!
M