Change Ad Consent Do not sell my data Monday Articles | Syracusefan.com
Menu
Log in
Register
Install the app
You are using an out of date browser. It may not display this or other websites correctly.
You should upgrade or use an alternative browser.

SU Freshman Moore is biggest running back on roster

Here are some of their practice news & notes

ST. LOUIS, MO - AUGUST 13: Taj Smith(notes) #10 of the Indianapolis Colts gets past the defense on a 44-yard touchdown reception in the third quarter against the St. Louis Rams during the NFL preseason game at Edward Jones Dome on August 13, 2011 in St. Louis, Missouri. The Rams defeated the Colts 33-10. (Photo by Joe Robbins/Getty Images) 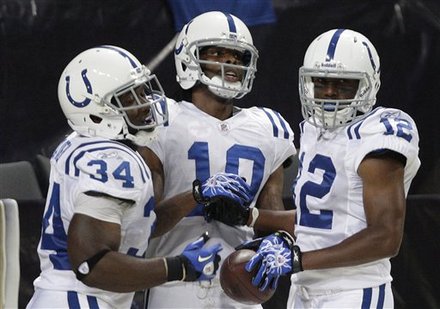 Hey, Tony: Do the Browns have any interest in T/G Adam Terry? -- Dennis Bartlett, Queensbury, N.Y.
Hey, Dennis: No.
CPD

Senior quarterback David Legree, who transferred from Syracuse in 2008, said the new locker room is larger than the one he used with the Orange, and he expects the improvements to have an immediate effect.

"Camaraderie. That's the biggest thing," Legree said. "Being able to have fun in the locker room with your teammates and not having to worry about rushing out because it's small. It just builds that team spirit."

Legree's excitement about the new digs spills over into talk about the 2011 season, which kicks off on Sept. 3 against Alabama A&M at Soldier Field in Chicago. Fueling his optimism is the spread offense of new coordinator Willie Snead, hired to spice up an attack that averaged just 17.5 points in 2010.

"  I love this system and I love what it does for our offense. It helps the offensive line and it helps the skill players. The ball is in their hands fast. It's out of my hands as fast as possible and in their hands, and we have some playmakers."

"Me as a player, my confidence has been through the roof, and as a team, we're feeling good," Legree said. "There hasn't been a time when we've competed with the defense on a consistent basis since I've been here. (Now) every day is a battle with the defense. They'll win three plays in a row, we'll win three plays in a row, and it's back and forth.

"As an offense, we're definitely trying to put up a lot of points. I feel like we have the opportunity to do it this year, more than any other year."
DP

But he got taken out by a cut block on a 16-yard screen pass and was stuffed by FB Tony Fiammetta on a blitz to give QB Jimmy Clausen time to deliver the TD pass to TE Greg Olsen.
SL

A&M moving? Whatever -- just wake us when the bleeding stops

This was done at FanFest​
You must log in or register to reply here.

A program spinning it's wheels