Some real quick thoughts on ROMO

Not going to get into my usual Odyssey in breaking down the coming game but a few general thoughts.

I have seen a few Robert Morris games but not enough to feel confident to give a full breakdown, Powellfan is likely our go to guy for that. That said from what I saw they are definitely a solid team with multiple upper level offensive weapons. They remind me a bit of some of those Albany teams in the past that had 4-5 seniors in there starting 6 and as such were hard to get flustered and a pain in the ass to play. 5 of their top six scorers are Seniors and Ryan Smith is the main guy who leads the team with 64 points. He's a canadian and a hell of a player. The good news if there is some for SU is that from what I know he is not an elite level dodger and I think Wykoff will match up a lot better then he did against Kavanaugh. Perkins is the #2 attackmen and scorer but is a smaller guy, listed 5'8 and that's generous. That matchup screams Horan. Getting Dami and Aviles (especially Aviles) back will be huge as the backups have really struggled at times which is to be expected. ROMO rotates 4 attackmen and the 4th guy (Kealey) had a 4 goals against Utah. Were really gonna need Horan and Murphy to rebound from ND and play fairly well. ROMO isn't as skilled in the midfield but are a threat there. Popovich leads the team with 24 pts but Jake Boudreau is second with 23 and properly the more well known name. I am unclear who they will put Kennedy on as their numbers are nearly identical. Boudreau has struggled against the power opponents as he was shut out by ND and Drexel and had 1 point against UVA and 2 against Duke. If I had to guess I assume Kennedy will take Popovich and Dearth will draw Boudreau. ROMO is a heavy Canadian team similar to Vermont so SU should be somewhat familiar with what to expect. They can move the ball extremely well but don't have that elite dodging ability that really causes SU problems ie Gray, Sowers, Kavanaugh etc. The big/little game and defending it will likely be key here, expect to see a million picks.

From an SU offensive standpoint ROMO is not a great Defensive team but who is at this point save for Maryland and ND. Against power teams the fewest goals they have given up is 14 against UVA, a game they had a chance to win and lost 14-12. I will say that I watched that game and UVA had an abysmal 4th quarter and tried like hell to give the game away. Assuming SU comes to play (far from guaranteed) they should be able to put points and a decent amount of them, again assuming they show up.

ROMO struggles at the X and is well under 50% for the year (.416). They use a 2 headed monster with the #2 guy actually having a better % (48%), then the main guy DelleMonache who is at 43%. In theory SU should have the advantage here but with Phaup it's hard to know for sure. He's looked better the last few weeks obviously with the UVA game being the big one but despite the numbers he was more competitive against ND then the 1st game. That said if he starts to struggle Desko has to go Varello quickly, this isn't the game to mess around. Wing play could end up being important here which isn't exactly our strong suit, cross your fingers. ROMO turns teh ball over and turns it over a lot. They are averaging 17.5 a game. 18 against Duke, 17 against ND, 18 against UVA (UVA had 26 that game), and 18 against Drexel. The problem here is that SU was horrific themselves with the ball last week and has had some real problems with turnovers this year. If SU takes care of the ball and plays the 1st midfield a majority of the game they should be able to score a bunch.

General Thoughts
1. I hope SU comes to play but based on this year I have no idea what to expect. I do expect ROMO to play like this is the NCAA championship game and if SU isn't careful we could blink and it could be 6-2 ROMO and were in a nightmare. This is isn't Holy Cross, mess around and SU will lose.

2. This is a game the Seniors and the "known" guys need to make a statement. Porter should bring his A+ game, Rehfuss should have 5+ points, Phaup should be at or North of 60%, Kennedy needs to dominate his matchup, the 1st line midfield should have 8+ points combined etc.

3. I highly doubt were going to see fresh faces at the 2nd mid line (god forbid) so the 1st mid line needs to play 75% of the time. Sub Quinn on the 1st line as needed ala Danowski when he had Myles Jones and Class. The 2nd midline beyond Quinn is a mess right now and should essentially be abandoned at least for this game.

4. Win the game. No excuses, Scanlan or no Scanlan get it done.

* Edit - On second thought I think SU is likely to pole Boudreau, I am assuming he drew Conners and ND's lock down LSM which is why he was a non factor. I assume SU will do the same as Kennedy is just as good as Conners.
Last edited: Yesterday at 9:12 PM

Aikman was better than Romo.

Good lord that was a fast response.
C

I think Aikman really was better but had a phenomenal supporting cast and coach. Romo is a great announcer though

Lfg Jeremycuse! We got this. Playoffs are a new season. It’s go time. Bring it on.

Great post Jeremey, I think you cover most everything I would touch on. I think the biggest story line for this game is, where is this Syracuse team mentally? On paper, SU should win this game, and I think they should win by a good amount. Yes, they've struggled against some good teams this year, but like you pointed out, Robert Morris struggles on defense and at the face-off X. Syracuse does well against teams that are shaky in those departments, even this year. I even think the Orange defense matches up well with the RoMo offense. Phaup has struggled against upper echelon FOGOs but not against those who aren't, even coming off big losses.

That said, this team has been through a lot recently, and it's hard to tell where their heads are at. It's not just the Scanlan news, these blow out losses have to have taken a toll on this team, especially after we've seen the same team do it them twice this year (Notre Dame). This team has to do some serious soul searching. Yes, getting back Aviles and Dami would be a huge step for the defense - but the D lost big with those two in the lineup. Is the zone defense something they'll stick with? It looked good against UVA, but the Cavs have a very unique offense and what works against them doesn't always translate well to other teams. It obviously didn't against ND, who exposed poor slides, poor communication and just flat out poor defending for an avalanche of goals. If zone isn't the answer what is? It really seems too late in the year to try new personnel. Right now they should be sharpening edges and refining things, instead they look like they need a complete overhaul. Needless to say, not what you want to see heading into the tournament.

Unfortunately, even a resounding victory over RoMo won't answer many questions. Frankly we've seen this team beat teams like this all year, pretty convincingly. But against tougher competition, this team has wilted and just given up. A win against RoMo won't convince me this team is now ready to play Denver, Georgetown, Rutgers or any of the other potential first round matchups. The only question that will be answered is if this team losses, or struggles in this game. That will tell me this team is done, and wants nothing more to do with this season.

getting Aviles and Dami back should be a huge pick up for the defense. Small is getting abused at SSDM. 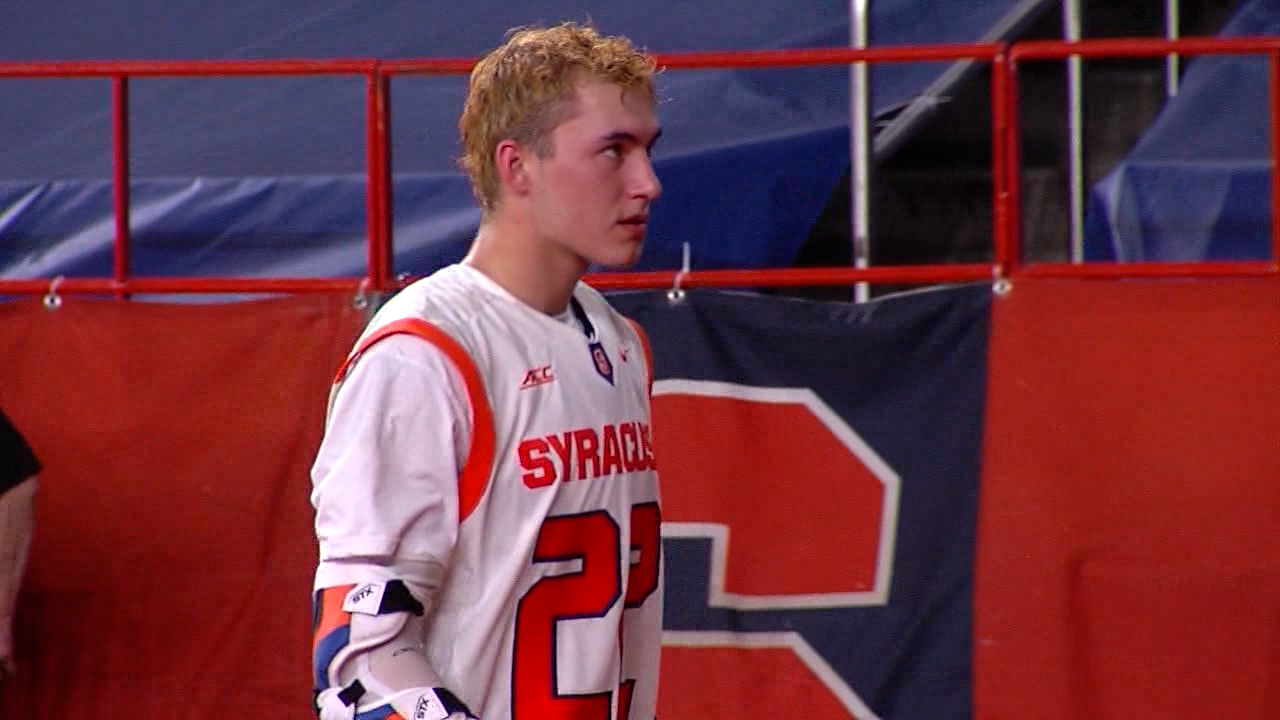 SYRACUSE, N.Y. (WSYR-TV) — Wednesday’s press conference for Syracuse Men’s Lacrosse Coach John Desko started off like they have for a couple of weeks. A Syracuse official reaffirming the…

Quit asking about the elephant in the room.

Ask about the other animals.
Last edited: Today at 5:13 PM

SYRACUSE, N.Y. (WSYR-TV) — Wednesday’s press conference for Syracuse Men’s Lacrosse Coach John Desko started off like they have for a couple of weeks. A Syracuse official reaffirming the…

Quit asking about the elephant in the room.

Ask about the other animals.
Expand...

Ya this hasn't become a distraction at all.....

JeremyCuse said:
Ya this hasn't become a distraction at all...
Expand...

You and I would have asked much better questions.

OrangeXtreme said:
You and I would have asked much better questions.
Expand...

Not a doubt in my mind, zero.

OrangeXtreme said:
You and I would have asked much better questions.
Expand...

Moment of Candor from Desko when he admitted he's worried the team is distracted by the Scanlan situation. Good question by Mark Larson.

A few quick thoughts on Albany

Potential Opponents with the Utah game being cancelled
2