Change Ad Consent Do not sell my data The Dino Babers Show- before Pittsburgh | Syracusefan.com
Menu
Log in
Register
Install the app
You are using an out of date browser. It may not display this or other websites correctly.
You should upgrade or use an alternative browser.

The Dino Babers Show- before Pittsburgh 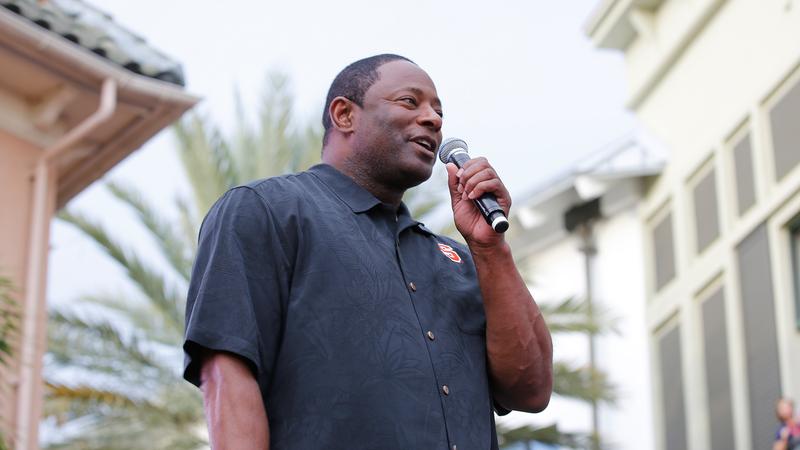 The season's first edition of the AmeriCU Dino Babers Show is set to air at 7 p.m. on Thursday, Sept. 2, live from Heritage Hill Brewery.

You can also listen to the show live each week on the Syracuse IMG Sports Network and Cuse.com. Wednesday's show will be on 99.1 FM and 97.7 FM, as well. The show will regularly air on 99.5FM (Syracuse) 99.1 FM (Utica) and 1200 AM.”
You can also get it on: Listen to Free Radio Online | Free Internet Radio | TuneIn

Coach, I’ve read that we are tied for the largest number of players to have entered the transfer portal with 8. Is this concerning, alarming or the new norm for schools in our situation?

Coach, in you introductory press conference in 2015, you asked us to close our eyes and imagine a full house, an electric atmosphere full of noise, a relentless defense, well-coached special teams and a no huddle offense that plays the game faster than we’ve ever seen. Are we there yet?

Dino’s final scheduled show of the season was a bigger fizzle than the basketball game. I asked if there would be a wrap-up show or a pre-bowl show and Brian Higgins, who was doing the show in matt Park’s absence, said that there were no plans for a post-season wrap up show “although we have done pre-bowl shows in the past”. The show began at 8. Dino left after 35 minutes, leaving Higgins to talk to Deon Maddox, and SU receiver form the 90’s who last spring was appointed SU’s “Director of High School relations”. That, in turn, was cut off by technical difficulties at 8:55 that they didn’t bother to fix and went back to playing some awful music. (The show was on K-rock FM 100.9 because the basketball post game was on 99.5 and the Crunch Hockey game was on 1200AM. I’m not sure what was on 97.7, their other station. ) I never got to ask my second question.

Higgins opened by suggesting that maybe there had been too much talk of a bowl game. Coach: “You got to take it one game at a time.” (But coach, we needed just one game!) “Our feet are in the present. Pitt is an unbelievable team but they are coming into our house. I wish the game was 1PM but it’s 7:30.” Higgins said “It’s fun to have a rivalry game on Thanksgiving.” Dino predicted that it will be “tougher, more physical” than our other games.

I called in my first question. DB: “It’s a little bit of the latter, a new norm. Most of the player sin the portal are guys having trouble beating out another player. You might have two quarterbacks and one goes to the portal.” [That makes it sound as if losing player to the portal is a good sign – it means you have someone better who is staying.] “With some of them you have the reason and the timing, and they are not similar. I’ve had guys coming up to me and reminding me that they’ve already played in four games and so they can’t play in this last game or they’d lose their redshirt year. And I like that because it shows they want to stay and get their Syracuse University degree. But it makes our depth chart rather thin at the end of the season. With the transfer portal and NIL and other things, coaches need to adjust and improvise.”

Higgins said that he saw a #34 Tucker T-shirt for sale and that eh liked the idea of “a guy did something and a guy got rewarded”. Dino: “It’s a little different when they haven’t done anything. But Sean has handled it well.” Higgins said that Joe Morris contacting Tucker was” a cool generational thing”. He asked Dino if the breaking of the record “has soaked in yet”. Dino: “It has and it hasn’t. We have one more game. Sean said that he would enjoy his success at the end of the year. He’s an amazing young man. His offensive line, the tight ends, the receivers, even the quarterback, have taken very good care of him. I saw Garrett blocking for him.” He reminisced about what he was doing when Joe broke the record back in 1979. Dino had just graduated from high school and was in his first year at Hawaii. “That’s a long time ago.” He said “You love all your children, but you have favorites. Sean came from nowhere and did it the old-fashioned way. He won people over the Sean Tucker way.

Brian asked about the ‘super seniors’ who are here because they got an extra year of eligibility due to Covid. They are going to have another senior walk after the game and Dino wants the fans to stay an honor and talk with the seniors, (and whatever juniors will be leaving). “For 95% of them, this will be their last time in a helmet and pads. It’s a changing of the guard. The new leaders will be in the locker room. Even if we go to a bowl game, that’s a new beginning for the team for next season.”

Pittsburgh has now clinched the coastal division. Higgins said that Kenny Pickett seems like a different quarterback than in past years. Dino: “It’s like he was an undergraduate and now he’s got a master’s degree.” Dino said that he’s the best quarterback in the conference, even over Sam Hartman of Wake Forest and Devin Leary of NC State. He’s up for the Davy O’Brien Award as the nation’s best quarterback and his top receiver, Jordan Addison, is up for the Fred Biletnikoff Award as the nation’s best receiver. He had 14 catches for 202 yards and 4TDs vs. Virginia. DB: “He’s an explosive player. Great quarterbacks and great receivers go hand-in-hand.”

Dino was coaching at Pitt in 2003 when Larry Fitzgerald was there, (and they whipped us in Pittsburgh 14-34: Dino had never been to the Dome before he came here). Dino didn’t coach Fitzgerald. He was coaching the running backs. He proudly noted that two of his charges, Lousaka Polite and Brandon Miree “played a long time for the Cowboys and the Broncos” Sort of:

www.pro-football-reference.com
Brandon Miree Stats | Pro-Football-Reference.com
He said he got a chance to see Larry perform and “I’ve never seen anybody better. He should have won the Heisman.” He finished second in the Heisman voting to Jason White of Oklahoma. There were a lot of players in the voting that were arguably better that Jason:
2003 Heisman Trophy Voting | College Football at Sports-Reference.com

What will be on the Coach’s plate for Thanksgiving? “Turkey, mashed potatoes, gravy, rolls, sweet potato pie and a second helping 4 ½ hours later. It’s traditional. I want to be consistently good, not occasionally great.” With the coach left and Coach Maddox sat in to fill the rest of the hour – until they were cut off by the technical problems.

Brian noted that every time he sees Deon, he is smiling. DM: “I just keep smiling. It’s awesome to be here and embrace the position I’ve bene given. I get to see young men do what I did and become man.” What does his job involved? “I’m involved with practice at a different level. Then there’s recruiting: it might involve watching 4-5 hours of film or calling recruits, coaches or alumni. I e-mail, tweet and use Facebook. We have 80,000 alumni here in New York but we also have 15,000 in California. We’ve got 70 football players living in the DC area alone. They say to me “I’m sending you this guy or that guy.”

Higgins noticed that Maddox came from Florida and that we’ve quite a number of Florida players on the team over the year to “give us some of that Florida speed”. Deon said it’s not just about the speed. “We have the mentality that we can go anywhere and shine.” Higgins wondered how much the focus has changed to places like the Carolinas and Virginia. Maddox agreed and added new Jersey, Pennsylvania and Connecticut. “We’ve got former coaches and players all over the East Coast. You have to build your relationships.”

How has the portal changed his job? “Not only do you have the FBS guys. You’ve also got the FCS guys now. There are so many guys to evaluate. We are looking for quality young men. You keep relationships with players and coaches and even their brothers and sisters. If they turn up you can say ‘I remember that guy’.” Brian mentioned Cole Swider with the basketball team. DM: “You have the option of accepting your role with the team or going elsewhere. When I came here, from Tampa I thought I was pretty good. But we had Marvin Harrison. My role was to go over the middle to clear things out for him. I would tell the quarterback that ‘If you start scrambling, I’m heading for the zone’. When I got here we had Qadry (Ismael), Shelby (Hill) and we’d just had Rob Carpenter and Rob Moore and Scott Schwedes. Kevin Johnson, (and Quentin Spotswoood) came after me. So we had quite a receivers room.” [Not like now.] “it was special. I knew I wasn’t going to play a lot. You play for who you are, your teammates, coaches and your school.” Higgins said that they used to “put it on Pitt in those days”. Deon agreed but “That was a long time ago.”

Maddox said that he could tell Sean Tucker was something special “on the grass field in August” and that that has given him reason enough to smile.

Brian said that he wanted to continue to reminisce about the old days and started to ask about Donovan McNabb when the show went silent. Then some bad music came on, followed by someone saying they were working on the technical difficulties and then that they’d decided to end the show at that point. And, barring a pre-bowl show, that’s how the Dino Babers show, 2021, came to an end.
O

"Then some bad music came on, followed by someone saying they were working on the technical difficulties and then that they’d decided to end the show at that point".

Thank you as always for these - this one must be especially difficult given how the season is ending on a low note (and I don’t dare to venture over to the basketball board after the last two losses).