Change Ad Consent Do not sell my data The View From 331: Purdue | Syracusefan.com
Menu
Log in
Register
Install the app
You are using an out of date browser. It may not display this or other websites correctly.
You should upgrade or use an alternative browser.

Good God. At 52, if this keeps up I'm going to have to start wearing ear plugs. My ears were ringing like I just left a Megadeth concert. This Wednesday they WILL be ringing because I just left a Megadeth concert. The football end of the day was so fun. So exciting. So emotional. It's been so long since we felt that way. It's been a long time, and I think even pre-Clemson win in 2017, since I have been in an SU environment like that. Imagine if it was full? For me it was reminiscent of McNabb to Brominski, or the Tennessee debacle.

Quad was buzzing. Same three food trucks as week one. Carrabas, Toss n Fire, and Limp Lizard. Womens Volleyball team on hand at 11 to sign. Nothing new to report out there.

Students are killing it. I don't know what got into them. The kids that are heading up the Otto's Army hierarchy are clearly making the difference. These kids are showing up, delivering, and staying. I suppose the real first test will be how they do in a game that we are not performing well.

I had a "soft" pretzel. To be fair, I've had them before and they were very good. This one was literally hard as a rock. One the bright side, I needed a new hammer.

The sound system had most certainly been dialed in a little bit. Music, Mr. Excitement, and even the video segments were way better. The video segments had the addition of subtitles which helped. The big trouble areas now are anyone with a mic. Dino's interview, the female host, and most of all the Marching Band announcer were awful. The female host is almost like watching a movie with the sound off. Just lips moving. The band director needs to be told by the powers that be to stop yelling into the mic. That would make the difference. I think we'll get there. Based on the sound a non-capacity crowd can make, I place more fault on the roof than I do the sound system. Just needs to be mastered.

There wasn't a whole lot to pick on. To make fun of. To take in outside of a great game. What I found myself doing the most, was looking at things as a first timer, like the Purdue fans who had never been here. This building is special, despite the haters. Look at this picture... 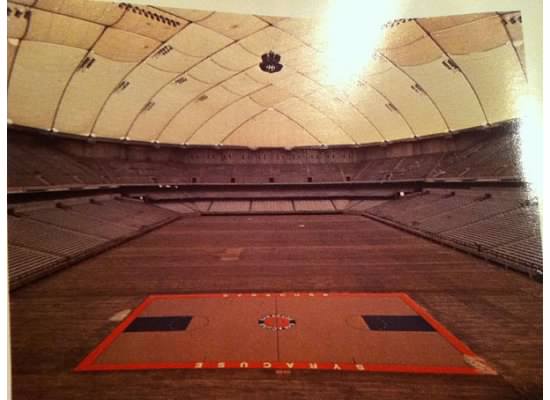 This picture is from the beginning. Oh how far we have come. What the newbies saw was a bright, fresh, reasonably high-tech, big-ass scoreboard, that was loud as hell. Louder than one Purdue writer said he had ever experienced, even in the Big 10. A facilty that holds many National Champion banners, many of which probably made them ask "what is lacrosse?'. I love this Dome. She is not perfect. Something can always be improved. Home sweet Dome. There is no place I would rather be.

The View From 331 this week, was magnificent.

LGO
You must log in or register to reply here.

The View From 331: Virginia

The View From 331: Florida State