Change Ad Consent Do not sell my data Throwback Tuesday | Syracusefan.com
Menu
Log in
Register
Install the app
You are using an out of date browser. It may not display this or other websites correctly.
You should upgrade or use an alternative browser.

This is some of the earliest film I have seen of a Syracuse team playing. Very good quality and get this, it is in color. If you are curious how football was played 90 years ago, check it out.

The year is 1939. The opponent is Cornell. The game is at Schollkopf. Cornell would end up winning 19-6, and claims a national championship for that year. They definitely had the better players.

The year before, these teams played one of the most famous games in Syracuse history, where a Rose Bowl bound Cornell team was stunned by a late comeback led by the stellar passing of Wilmeth Sadat-Singh, Syracuse’s first African American quarterback. 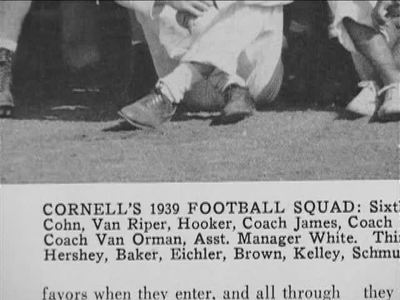 Highlights from the 1939 Syracuse football game in rare color footage. Also includes photos of the players and team roster. The film shows a full Schoellkopf Stadium, and cheerleaders are visible. The video has had musical accompaniment added over the footage. Cornell won the game 19-6 on the...

That’s awesome. They really tried to spread Cornell out. All 11 guys lining up within five yards of the ball.

They look slow. The linemen are small. And the ref in all white is a trip.

Lol...Now I'll be hearing my father's voice singing an off colored version of the Cornell Alma Mater in my head all day.
M

My Grandfather played in both of those games. Was the starting QB in 39 and played on the defensive line. I inherited his old scrapbooks when he passed. He and Duffy were co-captains and roommates. There's a picture in the Dome from the 1938 upset of he and Duffy and there's a game ball with the score written on it next to the pic. 19-17 I think.

Very cool.
You must log in or register to reply here.