Change Ad Consent Do not sell my data Wonder how hoya fans feel | Syracusefan.com
Menu
Log in
Register
Install the app
You are using an out of date browser. It may not display this or other websites correctly.
You should upgrade or use an alternative browser.

To everyone who went to the cuse at hoyas game on 3/9/13. I was not in attendance, however I heard the hoya fans were brutal to cuse fans. Wonder how those fans feel today, ahhhhahahhhahaahh

Georgetown has fans? You really do learn something new everyday 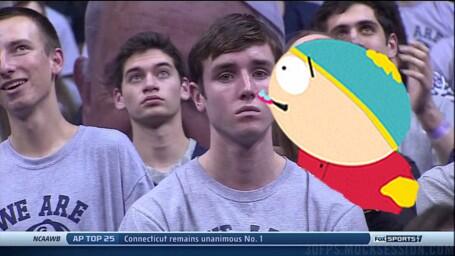 From the Washington Post write-up of the DePaul game:

“'I just told them what time we’re getting on the bus,' Hoyas Coach John Thompson III said when asked what he told his players in the locker room and if the NCAA tournament was discussed. 'The tournament, we’ll see. You’ve seen and heard what we’ve done. It’s kind of hard to sit and talk about that following this loss. We’ll see. I don’t know how things look after today.'

“'We beat a lot of good teams this year,' Trawick said, referring to victories over ranked opponents Virginia Commonwealth, Michigan State and Creighton, among others. 'We played a lot of good teams this year, but like Coach said, it’s hard to look at that after this loss tonight. It’s disappointing that we didn’t come out with the win. At the end of the day, I think we’re a tournament team.'”

And the beginning of the first (and currently only) comment on the article:

They both feel awful.

Couldn't happen to a more deserving team.
Cry those crocodile ears, Mr. Potatohead.
You'll be lucky to make the NIT.
You must log in or register to reply here.

It's time for your 15th annual IGGY AWARDS predictions
2 3