World Trick Shot Day is being observed today! It has been observed the first Tuesday in December since 2016. 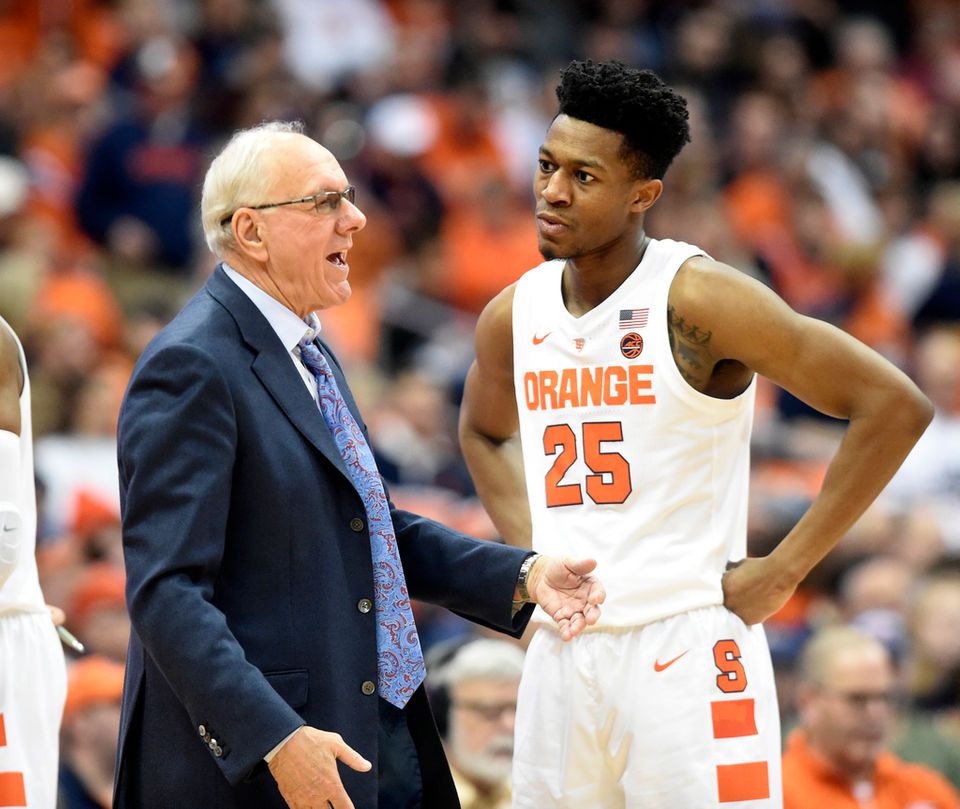 Syracuse basketball vs. Northeastern: 10 things to watch for (PS; Waters)

The Syracuse Orange will face a wounded but dangerous opponent at 7 p.m. Tuesday at the Carrier Dome (ACC Network Extra).
Syracuse will host the Northeastern Huskies, which is missing three keys players off the team that won the Colonial Athletic Association's regular-season title last year.
Northeastern has a 4-4 record this season, including an impressive win over Alabama in the Charleston Classic.
Syracuse, meanwhile, has improved its record to 5-2 after a 2-2 start to the season. The Orange is coming off a rather lackluster performance in a 63-55 win over Cornell on Saturday.
Here are 10 things to watch for in Tuesday's game:

Syracuse's starters
Jim Boeheim isn't one to tinker with his starting lineup, but Paschal Chukwu needs to start playing better or pretty soon he might not be listed among the Orange's starters.
Chukwu, a 7-foot-2 center, had just 3 points and five rebounds in Saturday's game against Cornell. He also turned the ball over twice. For the season, he's averaging 4.4 points and 4.8 rebounds. He is blocking a little more than two shots a game.
In addition to Chukwu, Syracuse's starters are guards Frank Howard and Tyus Battle and forwards Oshae Brissett and Elijah Hughes.

For Syracuse basketball, seven games and lots of questions - The Juice Online (the juice; Goodman)

I….. I….. I got nothing. No really. I sat down to write this column and give my impressions of the 2018-19 Syracuse Orange through seven games, and much like the team, I can’t put anything together.

It’s not my fault. I’m not suffering from writer’s block or anything. It’s just that this team is so uneven, so all over the place on a night to night basis, that formulating any sort of thesis or making any predictions is impossible.

After a couple of easy wins to open the season, the Orange looked terrible in back-to-back games at the Garden. But before I could write them off, the boys predictably beat Colgate and then went into Ohio State an brought home an impressive road win.

But, before I could get excited, Cornell, yes Cornell, knocked on the door of a huge upset before the Orange managed to hold on for the win. It was the first time in 13 years that the Orange didn’t win by double digits.

» Related: In battle of Boeheims, Syracuse basketball holds off Cornell

Do I harp on the fact that the Syracuse offense stalls out for giant stretches at a time and is only averaging 11.3 assists per game, good for 297th in the nation? I would, if it weren’t an uptick from the 10.68 assists per contest last year’s Sweet Sixteen team averaged. If that offense worked, why couldn’t this one?

So here I am still wondering about this team. Will Tyus Battle and Oshae Brissett need to play 36+ minutes per night to keep this team competitive, even against the likes of Cornell? Will they tire out if they do? Will Jalen Carrey find his way back onto the court and impact winning? Will Frank Howard find his feel and dish out more than three assists per contest?
... Syracuse (5-2) has won three games in a row and will face off with Northeastern (4-4) on Tuesday night in the Carrier Dome. The Huskies have won back-to-back games, including an 81-67 win over Eastern Michigan on Saturday. SU eked out a tight win over Cornell on Saturday, winning 63-55.

Here’s what our beat writers predict to happen on Tuesday night.

This game is an interesting one. Northeastern has a very capable offense led by Jordan Roland, who is shooting lights out of late, but the Huskies are without leader Vasa Pusica due to injury. But Northeastern’s defensive woes will be the difference in Syracuse pulling away at the end versus a tight contest down the wire. The Huskies rank 289th in defensive 3-point percentage and 323rd in 2-point field-goal percentage, per Kenpom.com. If Syracuse uses its athleticism to fight inside the paint, the Orange should have no problem taking down the Huskies.

In the early 2000s, Jordan Roland wandered into the Syracuse locker room with his brother, Ryan. They had special access: His father, Rahsaah, knew then-assistant coach Rob Murphy from Detroit.

Roland met Hakim Warrick and Gerry McNamara, among others. He went around with a poster of the team, asking for autographs. By the end of the night, the poster was filled.

Tuesday night, Roland, a Syracuse native, will find himself inside the Carrier Dome once again. This time, it’ll be in the visitor’s locker room. Roland is the leading scorer for Northeastern (4-4) in his first season since sitting out due to NCAA transfer rules, averaging 15.9 points per game. The Westhill (New York) High School graduate will return “home” with a chance to spoil the Orange’s (5-2) recent string of success.

“I’m just really excited to play in front of my family and friends that don’t really get to see me play as often,” Roland said.
...

Coach Adrian Autry joins the show to discuss the Orange’s win over Ohio State last week and what was different in Saturday’s game against Cornell.

The Fizz’s Tyler Aki and Tim Leonard break down what it means that the Orange is in the Camping World Bowl and preview West Virginia’s potent offense. They also wrap up Syracuse’s wins over #16 Ohio State and Cornell and what to look for in the week ahead.

The Huskies are back out on the road and facing off against their second ACC foe of the season when they head to Syracuse, N.Y. on Tuesday night where they will square off against the Orange at 7 p.m. at the Carrier Dome.

The two teams will meet for the first time since the 2007-08 season in a game to be features as an ACC Network Extra on WatchESPN.

Northeastern will be looking for its first ever victory over the Orange on Tuesday night and here are some other things you should know heading into Saturday's game.

Another week, another set of ACC Basketball Power Rankings. Here’s a look at the landscape of the league after the ACC-Big Ten Challenge resulted in a draw and Wake Forest melted down for its third loss of the young season to a team outside the top 100 in KenPom.

Led by Ty Jerome and Kyle Guy — a combined 35-of-81 on three-point attempts (43.2 3P%) — Virginia has shot 40.8 percent from beyond the arc this season. According to Synergy Sports, UVA has been off the catch this season: 1.2 points per possession (59.5 eFG%) on catch-and-shoot attempts this season.


De'Andre Hunter this season: 65 eFG% on catch-and-shoots, 70 FG% on half-court rim finishes. Got loose for a couple dunks vs. Maryland, playing so well off of closeouts. Passing game continues to evolve, too.​
... 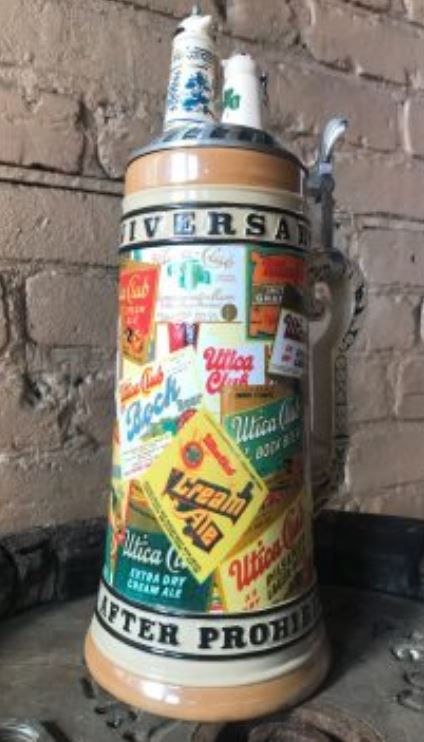 Erie Canal gift basket (Herkimer)
Gems Along the Mohawk is the name of one of Upstate's greatest regional gift shops. They stock an endless supply of products from the various regions of Upstate New York. If you can't settle on one particular region, I say go for the Erie Canal basket. This gift package holds a variety of goodies pertaining to New York's "great engineering marvel" (of its day). And, it includes something called Erie Canal Soap. Got your attention now?
Cost: $88
Website

85th anniversary beer stein (Utica)
Tours of the Saranac Brewery in Utica bring back all sorts of memories for Upstaters. Many, of course, remember when this was called the Utica Club Brewery Tour. The tour takes you through the entire beer-making process, ends at a wonderful vintage saloon (where you can actually have a real beer!) and then exits you through one of the best gift shops in Upstate. Collectibles, glassware, posters, clothing and more. And of course the wonderful beer stein collection! This year you can gift the beer lover on your list with an 85th anniversary Utica Club beer stein. It is nostalgic and beautiful all at the same time.
Cost: $99.95
Website
...