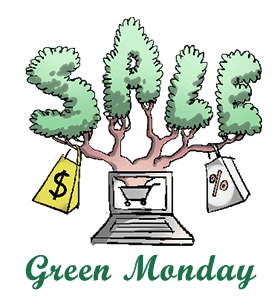 In order to participate in the day, all you need to do is buy something online. Many of the major online retailers have web pages or specials dedicated to the day, although deals are not as extensive as those for Black Friday or Cyber Monday. If you choose to use a standard form of shipping instead of the two day which some retailers now offer, you should still receive your orders in time for Christmas.

A look at a few plays down the stretch in Syracuse’s win over Georgetown (DO; Heyen)

After Syracuse (7-2) played a miserable first half against former Big East rival Georgetown (7-2) on Saturday, the Orange mounted a second-half comeback. But it all could have been for naught if not for a few key plays down the stretch.
Here’s an in-depth look at a few of the plays that helped Syracuse push past the Hoyas. All embeds via watchESPN.

Record: 5-3 (0-0 ACC)
Last week's ranking: 15
Last week's result: Win 80-56 vs. Charlotte
This week's schedule: None
What's to like: Wake Forest has the whole week off to try to get better, which is critical for one of the country's youngest rosters. After a slow start, sophomore Chaundee Brown, a former Top 50 recruit, has scored at least 14 points in three straight games.
What's not to like: The Demon Deacons are only 5-3 and haven't even played a team ranked among Ken Pomeroy's 100 best teams yet. There is only one team in the entire ACC, other than Wake Forest, that is ranked that low.
...
...
6
Last week's results: Win 72-49 vs. Northeastern; Win 72-71 vs. Georgetown
This week's schedule: Saturday vs. Old Dominion:
What's to like: Tyus Battle's game-winning jumper with 2.5 seconds left against Georgetown was the ACC's best finish last week and showed why he might be the best late-game option in the conference. The Orange has won all five games since the return of point guard Frank Howard. Only unbeaten Virginia owns a longer win streak in the ACC.
What's not to like: The lack of offense from both the point guard and center spots allows opponents to send help defense at SU's big three. The easiest solution would be Howard finding last year's form as he tries to return from a sprained ankle. He's averaging just 4 points and shooting 26.7 percent from the floor, down from 14.4 and 37.6.
...

Every week can’t be Rivalry Week. Every game doesn't hum with the anticipation of winning regional bragging rights and settling old scores.

Sometimes, there are afternoons like Sunday: raw outside, half-empty inside, and an opponent, Fairfield, with little local cachet and a lopsided record.

“We were a little bit lackadaisical,” point guard Ahmad Caver said. “People were real relaxed and we really weren’t that tuned in at first. We thought it was going to be, not an easy game, but we thought it was just going to come to us, but it didn’t.”

Coach Jeff Jones said he’d warned his players that Fairfield had been in every game but one. The Stags had dropped five games by three points or less and another by six.
...
...
The Monarchs play at Syracuse on Saturday. The farther up, the better the defense, and the farther right, the better the offense. Elite teams will be close to the upper-right corner, and not surprisingly, that’s where we find Duke and Virginia. The Cavaliers have the best defense in the ACC (surprise!) but maybe only the fourth- or fifth-best offense. Duke has been just plain scary.
The Blue Devils can be volatile year-to-year at the defensive end in the one-and-done era, and you just have to hope that they are going to struggle there, because they aren’t going to have problems scoring. Two recent sub-par years in this era were the result of poor defense: in 2014, Duke ranked 86th in defensive efficiency, and that Jabari Parker-led group flamed out against Mercer in the NCAAs. In 2016—this time led by Brandon Ingram—Duke again ranked 86th in DE, finished a modest 11-7 in the ACC, and didn’t get past the Sweet Sixteen.
...

Three ACC games Sunday and while two were not particularly interesting, VCU at Virginia was.

What it was was a game between two of four solid programs in Virginia (Virginia Tech and Radford are the other two). There was a time when the entire state was more or less a basketball wasteland. Virginia and VCU had occasional good teams but not much sustained success.

Tony Bennett has Virginia as a Top Ten program pretty much every season, post-season aside, VCU has prospered since Mack McCarthy coached in Richmond - Jeff Capel followed him, then Anthony Grant, then Shaka Smart and the Final Four, Will Wade and now Mike Rhoads, who is promising too.

Someone has made some excellent hires.

This was a close game until fairly late when Virginia went on a 19-6 run. As usual, Ty Jerome came through for the Cavs, scoring 10 of those 19.
...

Hurry up with the presents, and then buckle up. The ACC nonconference schedule is just about done.

Most of these institutions of higher learning, aka basketball powerhouses, are breaking for exams this week. No. 1 Gonzaga comes to Carolina on Saturday, and we’re ever closer to the grind that makes Tobacco Road home to the best college basketball in the nation.

Seven ACC teams have wins over ranked teams; they are a collective 10-8 thus far. And no, that’s not all Duke (two) and Carolina (one) — Florida State has beaten two, and even Virginia Tech is among those with one. Did you know Clemson has been ranked most of the season?

But the Blue Devils, Virginia and the Tar Heels — that was the predicted order, by a significant amount over Syracuse in fourth, and nothing dramatic has changed the landscape as we round the season’s quarter-pole.

That trio is loaded. And in the case of Duke and Virginia, particularly on defense.

The Blue Devils on Saturday eased past a very good Yale team — it has beaten Miami, Cal and went to double-overtime at Memphis — with still more comparisons to Duke defensive teams of the past. That’s high praise for the one-and-doners.
...

An early December 1968 advertisement in the Post-Standard declared that Tuesday, Dec. 10, 1968 would "be a most unusual day in Syracuse."
...
...
The event to which the ad was referring did not receive any coverage in the next day's Post-Standard, though it has had, now 50 years later, the most dramatic effect on the area and its people.


On that day, Wegmans, which proclaimed itself "a most unusual supermarket," made its Syracuse-area debut with the grand opening of its Clay store, on Route 57 at John Glenn Boulevard, two miles north of Liverpool.

Wegmans was already well-known in Rochester, where the company had started, in 1916, when John Wegman opened the Rochester Fruit & Vegetable Company.

By 1968, the company had grown to 26 supermarkets and the John Glenn store would be the first of four to open in quick succession in the Syracuse-area.

(The others planned were on East Genesee Street in DeWitt, on Onondaga Boulevard, in a plaza with a Fay's Drugs and Cook Department store, and one on Pond Street.)
...