Ingenious feats of engineering and architectural dexterity are on display in tall, multistoried buildings called skyscrapers, which we celebrate today. A confluence of factors led to the literal rise of these structures. For one, with increased urban commerce, as well as an increase in population density in urban areas, there was a need for them. Originally they were used for commercial purposes, but they are now often used as residential dwellings as well.

Another factor leading to their proliferation was the invention of the passenger elevator. The first one was installed in the Haughwout Department Store in New York City in 1857, and the first tall office building with one was the Equitable Life Building in New York City in 1870. A third factor, which ultimately made it possible for skyscrapers to be built, was the invention of the Bessemer process in the 1860s. This process paved the way for the mass production of steel, an alloy that is stronger and lighter than iron; steel was used to construct buildings and allowed them to be much taller.

The 10-story Home Insurance Company Building, completed in 1885, is usually seen as being the first skyscraper. Using steel girders and standing at 128 feet, it was designed by William Le Baron Jenney. Jenney's protégé was Louis H. Sullivan, another architect of early skyscrapers. It is on his birthday that National Skyscraper Day takes place.

Dior Johnson, a five-star point guard prospect out of the 2022 college basketball recruiting class, will be taking a visit with the Syracuse Orange. The visit will be unofficial in capacity and will take place starting on September 26.

News of the recruitment happening came by way of Rivals and Stockrisersreporter Jake Weingarten, who also mentioned the visit will run through the 27th.

It’s certainly worth mentioning the last we talked about Dior Johnson, the Arizona State Sun Devils were active in his recruitment process, both hosting the young man and offering him a scholarship.


Another thing worth pointing out, despite the 2022 cycle being a few years away from mattering in earnest, the youngster has over a dozen scholarship offers at this point.

Not all reputable recruiting service outlets begin tracking a player this far out. That being said, those that do not only have Dior Johnson pegged as a five-star caliber player, but as one of the 15 or so best talents in the entire 2022 grouping.

Obviously, that’s why the Syracuse Orange have so much interest in trying to land Dior Johnson.
...

The Maryland Terrapins just added a huge piece to their 2019 recruiting class. Literally.

Depending on who you ask, Marial is either a three-star, 210-pound or a four-star, 220-pound recruit (247Sports, ESPN), but he's unquestionably taller than seven feet. He also has a 7-foot-11 wingspan that Maryland coach Mark Turgeon expects will make him "an excellent rim protector."

"I've watched Chol the last three years and I can't say enough about him as both a person and a basketball player," Turgeon said in a release from Maryland, which lists Marial at 7-foot-2 and 230 pounds.

"One of the top players in his class when healthy, Chol's tremendous size and length make him an excellent rim protector. Chol possesses a humble demeanor and a strong work ethic that will fit well with our family. We can't wait to have him in College Park and look forward to helping him reach his dreams."


First, I would like to thank God!! Also the people that surrounded me in this journey and my family in the South Sudan and Arizona who has always believed in me. It has been a long journey, and I am blessed . I am proud to say I’ve committed to the University of Maryland.​

Originally from Rumbek, South Sudan, Marial moved to the U.S. as a middle-schooler in 2014. He also previously attended IMG Academy in Bradenton, Florida.

ESPN ranks Marial as the No. 2 center in Arizona and the No. 14 center nationally, while 247Sports says he's No. 6 and No. 26 in those two respective categories.

He visited Maryland on April 26, according to 247Sports, and also received offers from Georgetown, Florida State, Arizona State, Iowa, UConn and West Virginia.
...

By now most of us who have it have probably seen the ACC Network so some of this isn’t new. However, it is an interesting look at the studio behind the scenes as well as some information on the people who put it together. Kind of cool.
https://www.athleticdirectoru.com/articles/athletic-department-power-index-acc/ (athleticdirectoru.com)

It’s imperative to note the Athletic Department Power Index is not intended or developed to analyze the performance or potential of the current Athletic Director at the respective institutions. Rather it is an assessment of the opportunity generally through the eyes of both peers and aspirants to the position were it to become available.

Over 100 sitting Athletic Directors and executive-level administrators who currently are or could soon be an ACC AD were invited to share feedback on each AD job in the league. The data was used to provide detailed insights about the potential for success at each school.

The nine variables utilized to determine the rankings include:
Here are the overall results (graded on a scale of seven as ‘much better likelihood of success than peers’ & one as ‘much worse’):
... 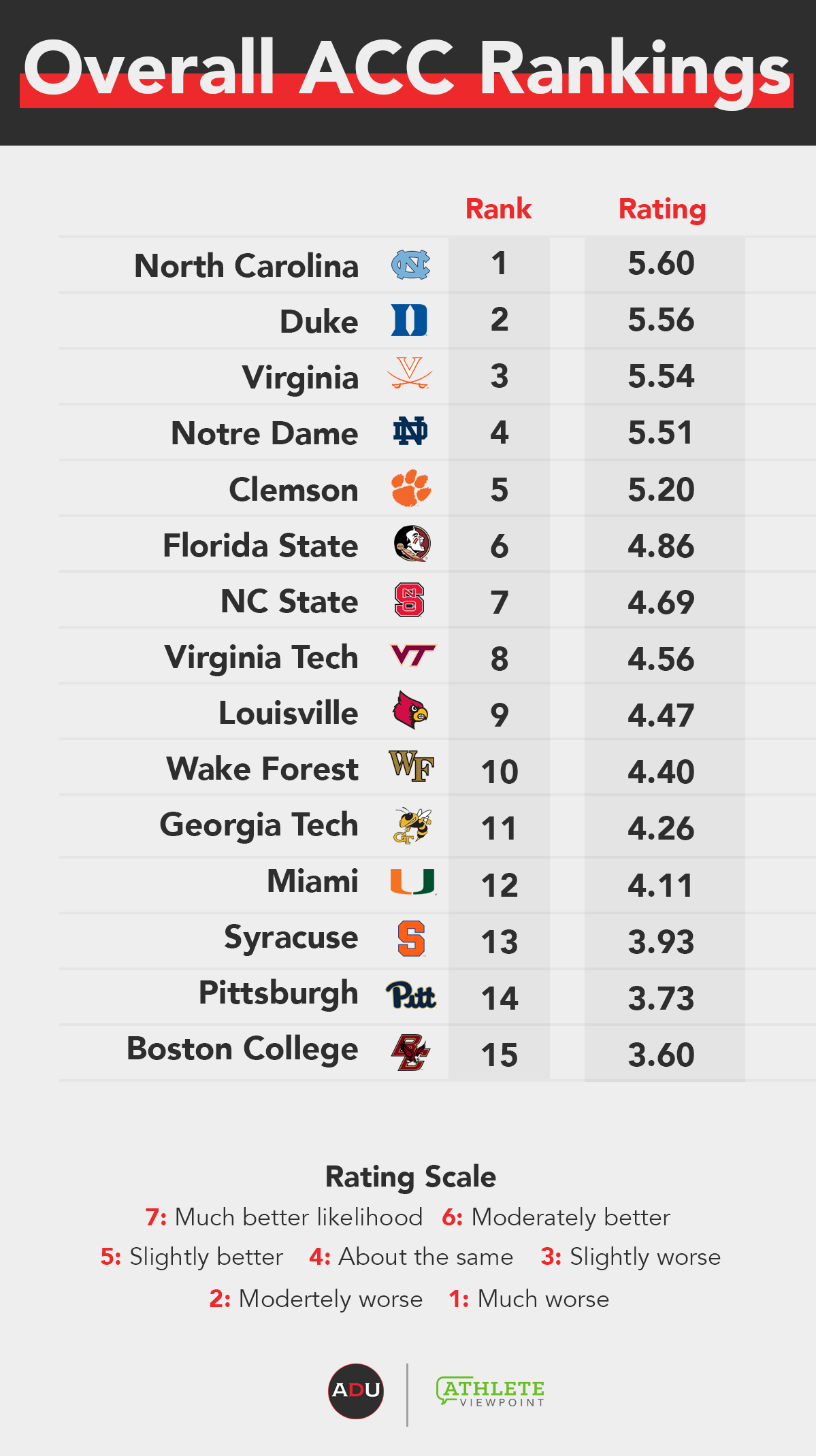 Wes Durham, who once served as the radio voice of Radford University basketball, is one of the stars of the new ACC Network.
Durham and Mark Packer will be the co-hosts of the new television channel’s “Packer and Durham” talk show, which debuts at 7 a.m. Friday. The program will air weekdays from 7-10 a.m.
“I’m just glad to be a part of [the ACC Network],” Durham said. “It was cool to be asked to be a part of this and for them to hand Pack and I the keys to do the show, which will be fun to do.

Durham will also serve as a football and men’s basketball play-by-play announcer for the ESPN-owned ACC Network.

He will work for a different employer on Sundays. He is keeping his job as the radio play-by-play voice of the Atlanta Falcons.

“When he gets rolling on some things, I’ll probably be regarded as the straight man. But we have a lot of laughs,” Durham said.

Durham did their old SirusXM show from his home in Georgia, while Packer was at his home in Charlotte.

For the TV show, the two men will be in the same place. The Connecticut-based ACC Network has built a TV set in the basement of Packer’s home. So Durham has moved into an apartment in Charlotte; his wife will go back and forth from there and their house in Georgia.

Durham and Packer will conduct remote interviews with ESPN folks in Bristol, Connecticut, and with ACC coaches on campuses. Virginia Tech carved a “bureau cam” room out of the Cassell Coliseum press room, for example, while UVa has a remote-interview studio at John Paul Jones Arena.

“We have the ability to do a lot of interviews because these campus facilities, whether it’s the one in Blacksburg or Charlottesville or any of these other places, that’s the secret sauce,” Durham said.
... 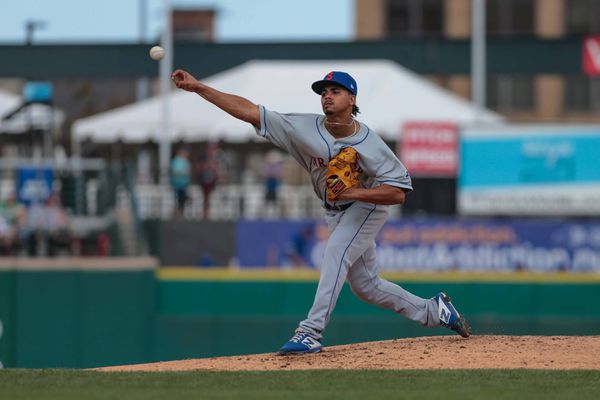 The Syracuse Mets have been the International League’s hottest team the second half of the season, a run that’s earned them a one-game chance to carry what looks like championship momentum into the playoffs.

Syracuse came up with another clutch win at Rochester 8-4 on Monday in the regular season finale, a result that combined with Scranton/Wilkes-Barre’s loss to Buffalo has locked the Mets and RailRiders into a first-place tie in the North Division at the end of the 140-game schedule.

Syracuse (75-65) will visit PNC Park at 1 p.m. Tuesday for a contest that will determine the North champion and the team that moves into the postseason. The winner of that game travels to wildcard winner Durham for games one and two of the best-of-5 series Wednesday and Thursday.

If Syracuse qualifies for that series, it will host game three on Friday and four and five, if necessary, on Saturday and Sunday.

The Mets are 33-18 since the all-star break and 18-7 in their last 25 games, including wins at Rochester on Sunday and Monday when a loss either day would have eliminated the team. That run helped Syracuse overcome a seven-game deficit in the standings on Aug. 7.
...