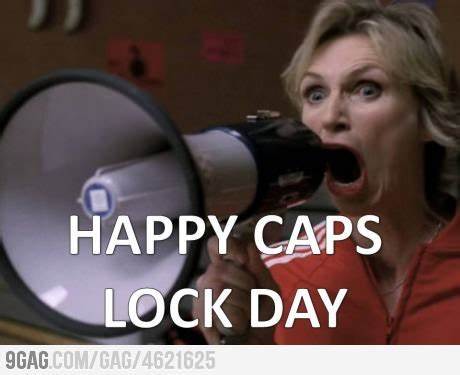 EVERYONE IS TO PUT THE CAPS LOCK ON BEFORE TYPING ON INTERNATIONAL CAPS LOCK DAY, A DAY THOUGHT UP BY DEREK ARNOLD OF IOWA IN 2000. HE STARTED THE DAY AS A PARODY, TO TAKE A JAB AT THOSE WHO WRITE IN CAPS WHEN IT IS NOT NECESSARY. WRITING IN ALL CAPS IS OFTEN USED TO INDICATE THAT THE PERSON TYPING IS SHOUTING, AND ITS USE IS OFTEN SEEN AS BEING RUDE OR ANNOYING. BEING THAT CAPS LETTERS ARE ALL THE SAME HEIGHT, THEY ARE HARDER TO READ THAN LOWER CASE LETTERS. THIS GIVES ONE INDICATION OF WHY THEY MAY BE SEEN AS BEING ANNOYING. THE DAY WAS ORIGINALLY JUST CELEBRATED ON OCTOBER 22, BUT AFTER "INFOMERCIAL KING" BILLY MAYS PASSED AWAY ON JUNE 28 IN 2009, THE DAY BEGAN BEING CELEBRATED ON THAT DATE AS WELL. THIS IS BECAUSE THE CAPS LOCK KEY STARTED BEING CALLED THE BILLY MAYS KEY BECAUSE BILLY MAYS SEEMED LIKE HE WAS ALWAYS YELLING WHEN HE TALKED ABOUT A PRODUCT.

KEYBOARDS HAVE NOT ALWAYS HAD A CAPS LOCK KEY. UPPER AND LOWER CASE LETTERS WERE ADDED TO THE REMINGTON NO.2 TYPEWRITER IN 1878. A SHIFT KEY WAS ALSO ADDED, WHICH HAD TO BE PRESSED DOWN TO SWITCH BETWEEN THE CASES. THE SHIFT LOCK, INTRODUCED IN 1914 ON THE REMINGTON JUNIOR TYPEWRITER, MADE IT EASIER TO TYPE MULTIPLE CAPITAL LETTERS AT A TIME. THE FIRST COMPUTER WITH A CAPS LOCK KEY WAS THE XEROX ALTO, RELEASED IN 1973. IBM INTRODUCED THE MODEL M KEYBOARD IN 1984; IT STANDARDIZED MANY KEYS, INCLUDING THE CAPS LOCK KEY. MOST KEYBOARDS STILL USE THIS LAYOUT, AND ALMOST ALL KEYBOARDS HAVE CAPS LOCK KEYS.

Item: This Saturday, Oct. 26, marks the first of three Saturdays over the next five weeks in which both the Syracuse football and basketball teams will play games on the same day. As the football team looks to somehow come up from the ACC mat and finally become the last team to win a conference game this season (and record just the sixth road win in ACC play dating back to the 2013 inaugural season) by defeating Florida State in Tallahassee (3:30 p.m. ET / ESPN2), the basketball team plays its first game with all of the roster available in an exhibition matchup with Div. II Daemen College at the Dome (7:00 p.m. ET / ACCNX). A perfect Saturday would be; the highlight of the football season so far with a much-needed victory, with the complete roster basketball team continuing to smartly use the preseason (Italy trip) to its advantage to get ready for the Virginia opener and beyond.

The thought is already giving us a headache.

If for some reason the 2019 Syracuse football team cannot come up with three victories in its final five games, and the “Syracuse” name does not appear among the matchups for the oversaturated 40 bowl games this postseason, meaning not being one of 78 teams (two teams play twice in the College Football Playoff) to head to the postseason, then it will lead to a big question.

Just how many more recruiting cycles is it going to take to build the kind of depth necessary, most importantly on each line, to compete in the ACC, knowing of the omnipresent injuries each season, to be “consistently good?”

That was a phrase repeated often over the summer by Dino Babers and the veteran players. The need to strive not for occasional greatness (2018’s rare 10-win season), but consistent success (annual bowl game appearances).

There also has to be balance on the depth-chart of underclassmen developing off a redshirt year, or not, with veteran players that now go back to Babers and his staff’s first class in the winter of 2016.
...

Four star guard Kadary Richmond has set an official visit date to Syracuse. Richmond will visit the Orange starting this Friday, October 25th and will be on campus over the weekend, he tells CuseNation.com. He picked up an offer from Syracuse on October 6th, and the Orange quickly jumped to the forefront of his recruitment. Richmond is rated a four star prospect and ranked as the 100th best player in the 2020 class by the 247Sports Composite Ranking. The composite also has Richmond as the 22nd best combo guard in the cycle. Richmond is listed at 6-foot-5 and plays at Brewster Academy in New Hampshire. He is originally from Brooklyn (N.Y.).

"Good length for a combo guard. Solid athlete. Good two foot jumper. An off-the-dribble scorer. Great change of direction moves on the drive. Rebounds his position and has good potential as a defender."

This comes on the heels of Andre Jackson choosing UConn just days prior. Still, it is clear why the Orange are after Richmond. He can handle, can score at all three levels, is a very good athlete and is extremely long. He has experience playing point guard, shooting guard and small forward, giving him some positional versatility. Richmond would likely come to Syracuse as a wing (can play the two or the three), however.
...

Syracuse Basketball: Hughes set to lead on and off the floor - College Hoops Watch (collgehoopswatch.com; Cross)

Losing Frank Howard, Tyus Battle, and Oshae Brissett costs Syracuse coach Jim Boeheim a ton of production, so now the Orange is looking for an offensive catalyst(s) to step up and make himself or themselves known.

Enter Elijah Hughes, who starts his senior campaign as the leading returning scorer at 13.7 ppg while shooting 36.9 percent from 3-point range. Hughes sat out the 2017-18 season after transferring from East Carolina and displayed a consistency on offense that the Orange is looking for across the boards.

“Last year he really was about our fourth option offensively, he’s our second leading scorer, which tells you a lot about what his ability is to score,” Boeheim says. “I think he’s improved over the summer.”

Hughes knew with the exits that his role would change on the court and off. Boeheim is going to make sure he has the ball in his hands in positions where he is a threat to score. Hughes has also ingratiated himself with the program in stepping up as a leader on what will be a younger squad.

The presence and maturity Hughes has shown has been a help to the knew group of Orange that seems to have flown under the radar a bit in their recruitment. He noted how tough the transition for freshmen can be and why he was more than willing to pick up as a mentor and a big brother in the program.

“They all each bring something different and unique to the table,” Hughes commented. “I’m just really excited to get going with them and everyone else that we have and have a good season.”
... In Jalen Carey’s first season in Orange there was plenty of hype, a few flashes, and way too many turnovers. In the third game of the season Carey almost led SU to a win over UConn, slashing to the hoop for 26 points to go along with seven rebounds and three steals. But the stat that foreshadowed the rest of his season was the turnovers. He lost possession of the rock six times at Madison Square Garden. As the season went on Carey’s confidence seemed to regress by the game. By the end of the season it looked like he could barely dribble without dribbling off of his foot.

So will we see the highlight version of Carey from early last season? Or will we see a guy with the ball handling skills of Paschal Chukwu?

Why Syracuse Needs Him?

SU desperately needs Carey to at the very least bring the ball up the court. The squad is incredibly inexperienced at point guard. Behind Carey is Howard Washington and true freshman Brycen Goodine. Joe Girard may be able to play some point, but he’s a true shooting guard despite his 6-foot-1 stature. And while Washington is a junior, he’s only tallied 120 minutes of playing time in his career.

Carey won’t be a three-point threat for the Orange, but his ability to get to the hoop will open up space for his teammates. On the defensive end, his length fits perfectly into Jim Boeheim’s 2-3 zone, and he can start plenty of fast breaks for a team that wants to play fast. I can already picture Carey tipping a pass, running it down, and then finding Buddy Boeheim on the wing for a wide open three.

As alluded to, Carey has the potential to be an absolute nuisance for opponents at the top of the zone. Carey could easily clog passing lanes for 30-35 minutes a game. The big question is can Carey take a step forward offensively? He doesn’t need to be a big-time three point threat, but he could easily average 12 points per game to go along with five assists per game. Plenty of those assists will be to open three point shooters as well. If Carey can do more than simply manage the offense, this could be a high scoring team that can score from every area of the floor.
...

John Wallace to have his No. 44 jersey retired in February 2020 (DO; McCleary)

Former Syracuse All-American John Wallace will have his No. 44 jersey retired, SU Athletics announced Monday afternoon. The official ceremony is schedule for Feb. 29, 2020.

“John was one of the most important recruits we signed during my time as head coach,” Syracuse head coach Jim Boeheim said in a press release. “He was a high-profile player from the Rochester area who had a great impact on our program. He is very deserving of this honor. John’s jersey definitely fits with the others we have retired.”

Wallace finished his Syracuse career third in both points (2,119) and rebounds (1,065) in SU history. In his senior year, the Rochester native averaged 22.2 points and 8.7 rebounds per game, leading Syracuse to the NCAA title game where it fell 76-67 to Kentucky. Wallace was drafted No. 18 overall by the New York Knicks in the 1996 NBA draft and played seven professional seasons for five NBA teams.

Wallace will be one of 14 players with a retired SU jersey number, joining Carmelo Anthony, Dave Bing, Lawrence Moten, among others.

2 public hearings to be held this week for big distribution center project in Clay (PS; Moriarty)

The public will get two chances this week to comment on a proposed $280 million distribution center that the developer says will create 1,000 jobs.

Both hearings will be held at Clay Town Hall at 4401 Route 31 in Clay.

Dallas-based Trammell Crow Inc. has proposed building a five-story, nearly 3.8 million-square-foot distribution facility on a 111-acre property currently occupied by the Liverpool Public Golf and Country Club north of the village of Liverpool.

The developer has said only that the building is being designed for an e-commerce company or retailer. Logistics experts say the tenant will likely be online retailer Amazon.
Trammell Crow has applied to the county development agency for sales and mortgage recording tax exemptions and 15 years of property tax discounts. It is seeking a zoning change and site plan approval from the town.

A hearing held by the Clay Town Board on the zone change Sept. 30 drew an estimated 300 people. Supporters praised the project’s economic benefits, while opponents expressed concerns about traffic, noise and pay levels.